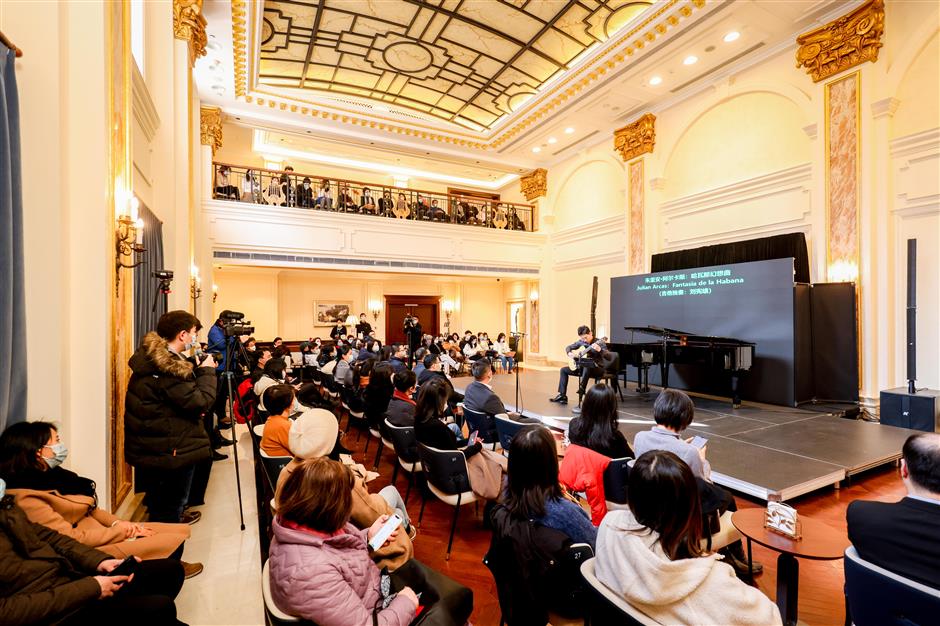 Shanghai Concert Hall celebrated the 10th anniversary of its popular "Lunchtime Concert" program. Held in its small hall, it is a weekday one-hour concert.

Tenor Guo Zizhao still remembers his debut concert at the historic Shanghai Concert Hall when he was a third-year student at the Shanghai Conservatory of Music. From there, he performed in a "future musician's concert" and later a solo concert in the same year at the concert hall.

The Milan-based rising opera star has since won many prizes and sung Don Jose in "Carmen," as well as Pinkerton in "Madame Butterfly," among other performances on European stage, but the first remains special.

"It was a turning point," Guo said, recalling his debut 10 years ago, shortly after the concert hall launched its "Lunchtime Concert" program.

"Shanghai Concert Hall has a special place in my heart, and the 'lunchtime concert' is always like an old friend."

The program's 10th anniversary was celebrated last week. Guo was among dozens of musicians who cherished the weekday lunch program that gave them a stage early on in their career.

Chen Yibai, a promising cellist who won fifth prize at The XVI International Tchaikovsky Competition in 2019 at age 17, was a regular concert goer at the hall since age four or five. He considers programs like lunchtime concerts good platforms to nurture new fans.

"Small stages like this have nurtured increasingly more new fans for bigger classical music stages. That is quite important, because the audience is also a big part of concerts. Here, performers are so close to the audience," he explained. 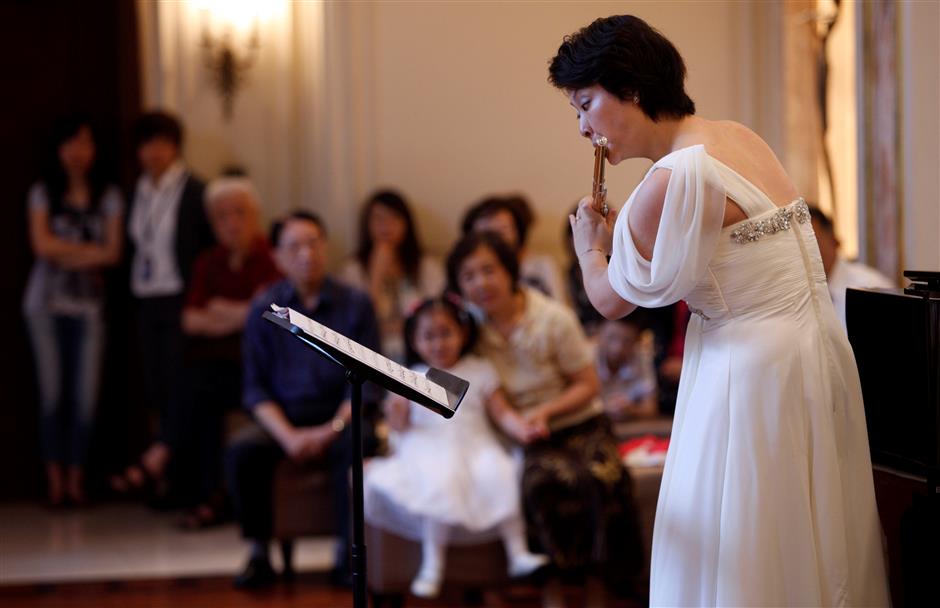 Constructed as a cinema in 1930, the concert hall always took pride as a "temple of classical music" in Shanghai. Veteran local fans still get excited when they recall standing in long queues for early "phenomenon" concerts, such as a 1985 series when all nine Beethoven symphonies were performed.

But that changed around the year 2010, when the classical music market gathered pace in the city. More venues were open, programs were designed with more focused themes and more diversity in music genres, and more international stars visited. New fans were emerging.

Shanghai Concert Hall also changed its philosophy from a "temple" to the city's "music living room." It vowed to provide diverse quality music at low prices, and to provide a stage for emerging musicians.

The lunchtime concerts were part of this change. Over 10 years, the program has hosted more than 6,300 musicians who have performed 12,000-plus music pieces in 1,927 concerts, in front of more than 200,000 audience members.

"It's quite a lovely idea to have a concert at lunch time. I love classical music but I just can't find time in the evenings," according to 32-year-old Victoria Chen, who heard about the program from a colleague when she joined a company near the concert hall five years ago.

"I always need to work long hours, making it difficult to arrange for evening events. But at lunch time, I usually take a break, so this works out perfectly."

It has also attracted new fans who were not regular concert goers like Gu Lijuan, in her 50s, who lives nearby.

"I've lived here for 30 years, and Shanghai Concert Hall and classical music used to feel too classy or high-end for me. I love the architecture of the venue, and I hang out at the plaza there, but I don't understand classical music," she admitted.

Gu added she first heard of the program from a neighbor of about the same age, and was initially attracted by the low ticket price.

"And I just enjoyed it – very relaxing – and those around me didn't seem like they understood more than I did. And I realized that it doesn't matter whether I understand or not, just so long as it pleases me," she said.

Following its 10th anniversary, the popular program will continue with more extensive concerts in local communities. 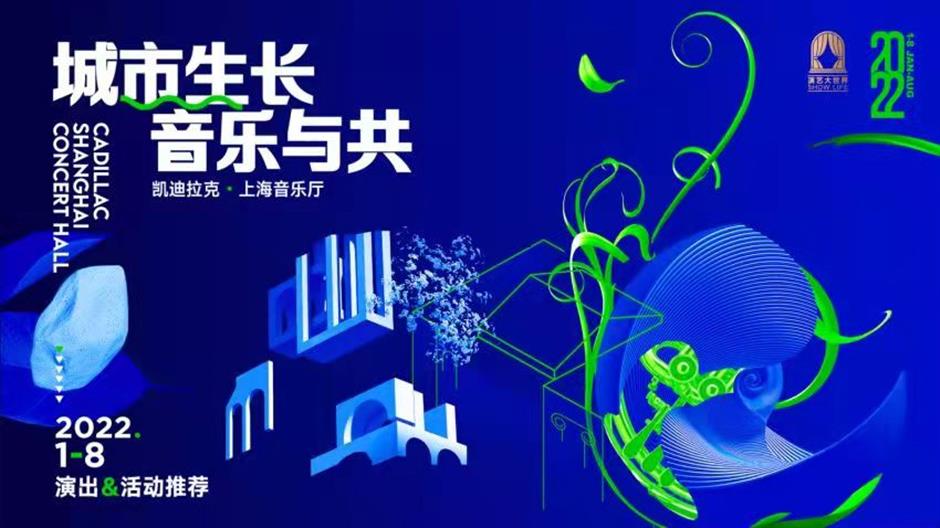 Shanghai Concert Hall has announced its schedule for the new season, with concerts, exhibitions and seminars to take place between January and August.

The popular residency show, "Traditional Music Rises from the Sea Horizon," which was launched last year, will return in March, along with the immersive art exhibition featuring traditional Chinese music instruments and the 3D projection mapping show on the 92-year-old venue's iconic wall.

The concert, performed by the Shanghai Chinese Orchestra, has toured more than 30 cities around the world since 2016. The residency show is an upgraded multimedia version, with lighting and videos specially designed for each piece in the repertoire.

Chinese musical "The Twilight of Springtime," co-produced by the concert hall and premiered to critical acclaim in 2017, will also return in April with upgraded stage designs. It tells a nostalgic story portraying aspiring young people fighting for their dreams in the 1990s Shanghai, when the city and the country were undergoing rapid and significant transformation, economically and socially.

The musical's scriptwriter Yu Rongjun called it a "love letter to the 1990s China and a youth declaration for the new era of Shanghai" when it premiered. Through this "love letter," audiences will also see familiar Shanghai landmarks in the musical – from the Bund to wholesale markets.

The mini season, launched in 2013, includes three concerts and three seminars featuring one theme every year.

The concert hall has also been promoting more cross-over performances in recent years. Highlights from this season include jazz with electro and multimedia, and a series of chamber concerts featuring a combination of Chinese and Western music instruments.

The first of the series will be performed with bamboo flute, cello and piano.

Shanghai will turn into a giant La La Land with melodious music played at street corners, downtown and at suburban forest parks throughout the year.

Check out some of the places where you can go to chill and thrill your ears to mellow and sweet-sounding notes.

The open air concert, usually in May, at the Chenshan Botanic Garden in Songjiang District marks the end of spring and start of the summer. About an hour's drive from downtown, musicophiles can treat themselves to different genres – from jazz, pop, rock to classic – from morning till late evening. The concert will be accessible to millions of listeners on social media platforms and radio. 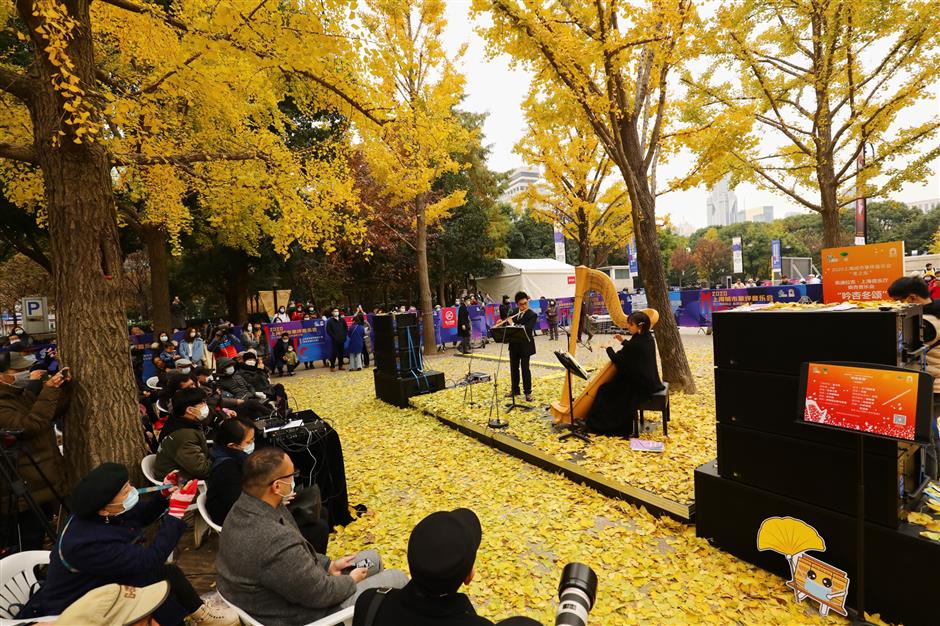 In winter, when the gingko trees outside Shanghai Concert Hall turn yellow, citizens throng to the thick golden mattress to enjoy a symphony by classical musicians. The flutes, harps, and pianos are in tune with nature, and with the soprano's high notes, they create a dreamy atmosphere in the concrete jungle.

The theater is known for its packed live talk shows every month, but it entertains music lovers as well. For classical audiences, it presents classics by Strauss, Tchaikovsky, and Mozart. Movie fans can relive those golden scenes during the concerts of the original soundtracks, such as "The Wizard of Oz," "La Vie en Rose," and "The Legend of 1900." 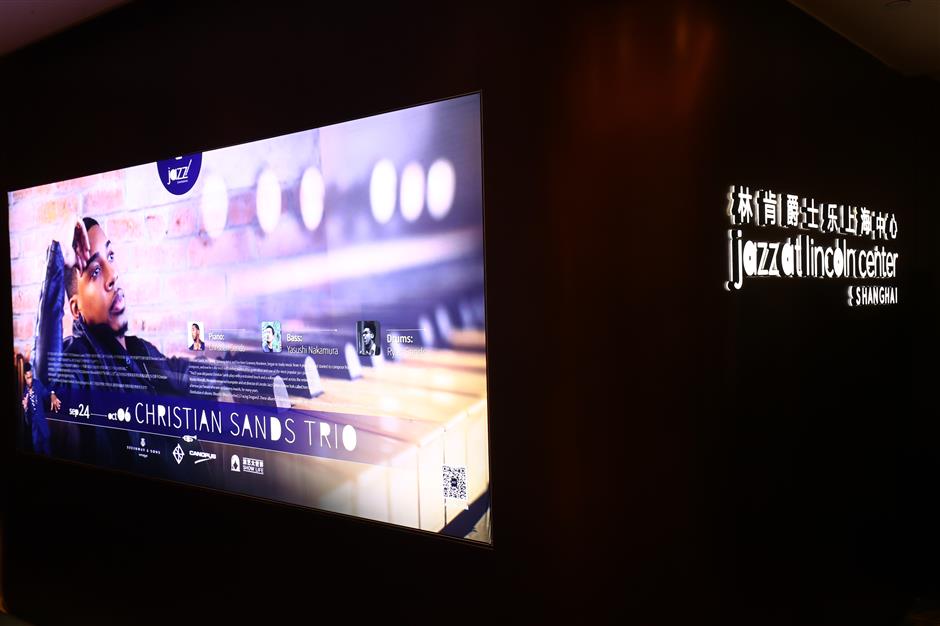 It's a cozy place for jazz lovers, just a two-minute walk from the Bund. The small space ensures a close view of the performers and is highly recommended for its unique musical experiences. The groups change every two or three weeks, thus ensuring variety. Founded in 1987, Jazz at Lincoln Center is headquartered in New York City and has presented several legends and rising stars over the years. On its 30th anniversary, it launched its Shanghai jazz club to entertain, enrich, and expand its global community of jazz through world-class performances.