Sun Xun's artwork can always be distinguished from that of his contemporaries.

The artist, who has developed his own art language, was scheduled to have his first solo exhibition at ShanghART Shanghai on March 12. But the COVID-19 lockdown put the plans on hold.

Focusing on the first portion of his first feature-length narrative animation "Magic of Atlas" – Luocha (a nation with no history, no memory and ruled by the evil ghost Luocha), the exhibition is deemed as a presentation of achievements after its release at ShanghART M50 in 2019, with all of the works that are involved in the initial stages on display. 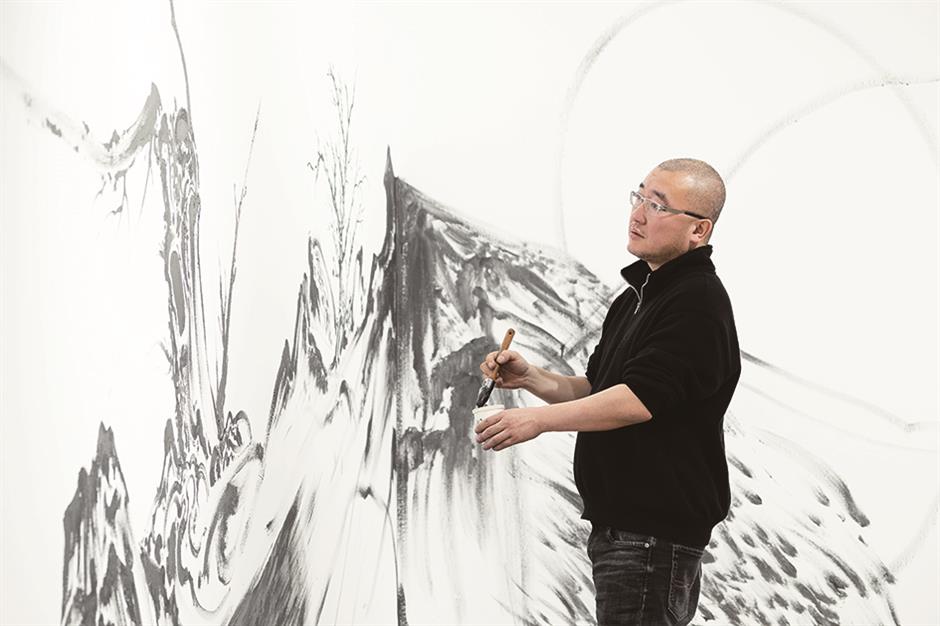 Sun gives a demonstration of his art at the gallery.

Sun was born in 1980 in Fuxin, Liaoning Province. He was accepted into the middle school affiliated to the China Academy of Arts in Hangzhou, where art students were exempted from the study of mathematics.

He later majored in the Printmaking Department after discovering that the students were free to create their own designs. One day, when he was working on his animations, the dean of the department hinted that he would never make it and advised him to give up.

"He told me that my work would never be chosen for any film festivals, nor would I be able to earn money. He thought I was going in the wrong direction," Sun recalled.

A year after his graduation in 2005, he established π Animation Studio. His works are mainly drawing and animation.

Whether it was fate, hard work or a combination of both of them, Sun had a clearer vision of his life and career at a very young age than his peers. In 2006, he started applying to film festivals and discovered that "well-known international film festivals just wanted good movies, commercial or artistic."

However, his short animated films stand out because he is a stickler for tradition, insisting on hand-drawn sketches or woodcut prints to make his films rather than the computer graphics that are prevalent in the industry. His visual language essentially consists of metaphoric imagery, dark and intense hand drawing, and a dreamy narrative.

His films have been screened at the Toronto International Film Festival ("Lie of Magician," 2005) and Venice Film Festival ("21G," 2010). "21G" was the first Chinese animated film to be selected by the Venice festival.

He has recently started experimenting with new media art in order to expand his visual art possibilities. His work explores non-linear expressions of time and space through a variety of media, including newspapers, books, woodcut prints, Chinese ink, and pigment powder. He explores both realistic and illusory representations based on his own understanding of society and sociological theories.

Q: How do you spend your days in Shanghai during the lockdown?

A: I have online classes for students at CAA at 10am. I usually read books, practice calligraphy and paint in the afternoon. The evening is my happy hour when I will get some drinks and communicate with colleagues at my studio in Beijing.

Q: What book are you reading now?

A: "The Collected Works of Ludwig Wittgenstein," which is translated by Chen Jiaying.

Q: How have your circumstances changed as a result of the COVID-19 outbreak?

A: Human beings, in my opinion, were actually animals before the epidemic broke out. Now I understand why man is different from the other animals.

Q: You previously stated that your art requires no explanation. Does this mean that viewers can simply feel and interpret the artwork as they wish?

A: Each of us sees the world through our inner lens and feelings. It is sometimes futile to offer any explanation. However, this inner self is also always changing due to outside influence. Man is perpetually paradoxical.

Q: What does the exhibition title "An Infinite Journey" mean?

A: Each visitor's interpretation of this exhibition will be unique. That is infinite. Today, we live in an epoch, which is characterized by human's domination over all other species on the planet. However, the living conditions of everyone is radically different. Each sees a phase of the moon that reflects the heart of his or her self.

Q: How would you define Luocha, the fictitious land depicted in your animation?

A: It forbids flying and memories. It is abundant in coal.

Q: How long did it take you to create this animation? What kind of mood were you in, calm or anxious?

A: It lasted nearly 10 years. I'm quite confident and at ease. In my heart, this film is already complete. What I've enjoyed is the production process.

Q: You said that art is pointless at the moment and its purpose is to point to the future. How do you feel about the future, optimistic or pessimistic?

A: I am neither an optimist nor a pessimist. In other words, the future and present are inseparable, while time is a figment of one's imagination.

Q: What if a computer game company approaches you about collaborating on a game based on your animation and the characters of Luocha? Would you agree, hesitate or refuse?

A: I will be delighted to collaborate with them.