A night at the museum: Zhejiang's first 24-hour exhibition space

The first 24-hour "museum" in Zhejiang Province officially rolled out the welcome mat for visitors over the weekend.

The new exhibition space, which is inside the Zhejiang Museum of Natural History, displays its 300 exhibits using metaverse technologies. Multimedia, augmented artificial intelligence, voice and interactive installments are used to vividly show the displays.

It is now open around the clock on weekends, and on weekdays, it will be open till midnight.

"It is a pilot program to develop a new type of public cultural space. We hope the 24-hour museum can carve out a new development path for museums across Zhejiang Province," said Yang Jianwu, director of the Hangzhou cultural heritage bureau.

The museum also hopes to provide children with fun-filled nights after school following the "double reduction" policy, which rolled out in July last year to alleviate the pressures of excessive schoolwork and off-campus tutoring.

"The 24-hour museum offers kids an after-school option for both entertainment and learning. They can participate in interactive activities and in return explore science in a fun way," said Xiang Shengju, headmaster of the Hangzhou Zhaohui Experimental Primary School.

The exhibits mainly include specimens of insects, birds, dinosaurs, butterflies, plants and minerals, giving visitors a well-rounded picture of the ecological and biological diversity of Zhejiang.

At the entrance stands a specimen of Jinyunpelta sinensis (缙云甲龙), a type of Ankylosaurus. It is named after Jinyun County in the western part of Zhejiang where paleontologists first discovered it. The county is home to many dinosaur fossils. 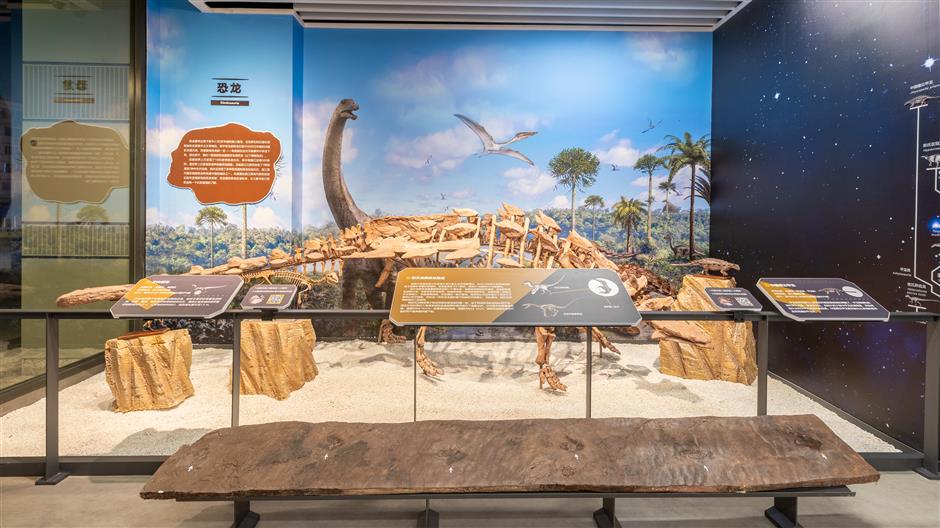 Dinosaur skeletons are on display at the new 24-hour exhibition space inside the Zhejiang Museum of Natural History.

Many popular traditional depictions show the Ankylosaurus in a squatting position, with a huge clubbed tail being dragged over the ground. Modern reconstructions, however, show the animal with a more upright posture with the tail being held clear of the ground.

Ankylosaurus is famous for the large bony club on the end of its tail. A handful of specimens have been dug up so far, but only few have been discovered with the club.

In 2008, some Ankylosaurus fossils were unearthed from a construction site in Jinyun, and experts from the museum were soon called in.

They spent six years excavating 300 pieces of fossils and another five years restoring the skeleton. The museum's skeleton with an intact bony-club tail was the first one found in Zhejiang.

Plants are another highlight of the exhibition. Zhejiang is home to thousands of plants, and more than 100 of them are listed as national protected varieties.

Some have developed into cash crops and deeply influenced the local economy throughout history, while some have evolved into common ornamental plants dotting nooks and footpaths.

Shisuan (石蒜) is commonly known as the red spider lily in Western countries. The petals are arranged in umbels. Individual flowers are irregular, with narrow segments curving backwards and long projecting stamens.

Since they are not frost-hardy, they can only survive under glass or in a very sheltered position. But the heavy rainfall this summer has made the flowers more vibrant than before. Hangzhou is at the frontier of cultivating new shisuan varieties in China. 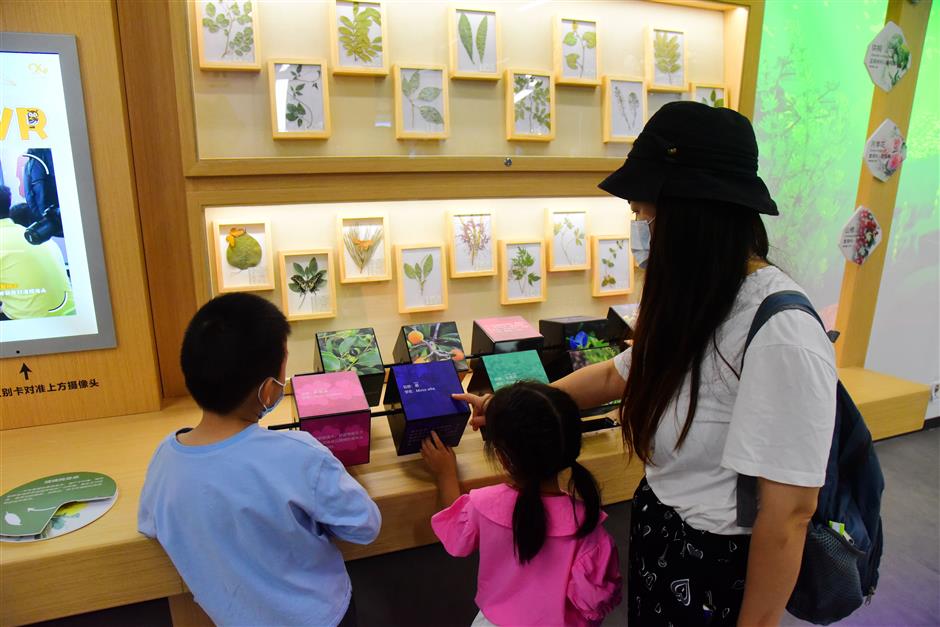 A mom and her kids learn about plants in the museum.

Mulberry trees have changed the lives of many people across Zhejiang. Centuries ago, an entire silk production chain, including growing mulberry trees, breeding silkworms, making looms and spinning, was formed along the Yangtze River.

The mulberry leaf is the sole food source for silkworms and a bed to make their silk cocoons. Today, some villagers still breed silkworms using the original methods of Zhejiang.

Another popular local plant that is also on display is the loquat. The plant's leaves are also used as an important ingredient in making loquat syrup. In traditional Chinese medicine, it is used for easing sore throats and coughs.

Hangzhou's Tangqi Town has been a nationally acclaimed production area of loquat for many years. Its loquats are sweeter in taste compared to others and have a thinner skin and tenderer flesh. Now the fruit is available in markets.