Don't cry a story to this barman

As Tipsy methodically unfolds an arm to select a glass, retrieve ice and mix a drink, it’s all a far cry from the flashy swagger of Tom Cruise in “Cocktail.”

But then he doesn’t have the twinkle in his eye of a fictional Hollywood bartender — or any eyes at all, for that matter — because Tipsy is a robot.

He won’t be able to swap sporting banter or offer relationship advice to lovelorn paramors but he mixes a mean Bloody Mary for his customers at his shopping mall bar in Las Vegas.

Tipsy is the logical conclusion of an increasingly space-age service industry that has already given us the mechanical cupcake dispenser and automated pizza restaurants.

“Monsieur” and “Tended Bar” are two brands among a new wave of machines that can whip up cocktails at sports arenas, hotels and other venues for a fraction of the cost of a human server.

The concept — essentially a vending machine with a boozy kick — couldn’t be more straightforward: Select your tipple from a digital menu and wait moments for that little slice of liquid gold to drop into a plastic beaker.

The idea is not uniquely American — Parisian start-ups Realtime Robotics and Kuantom have also produced bartending automatons, while vending machines for canned alcohol are common on the streets of Tokyo. 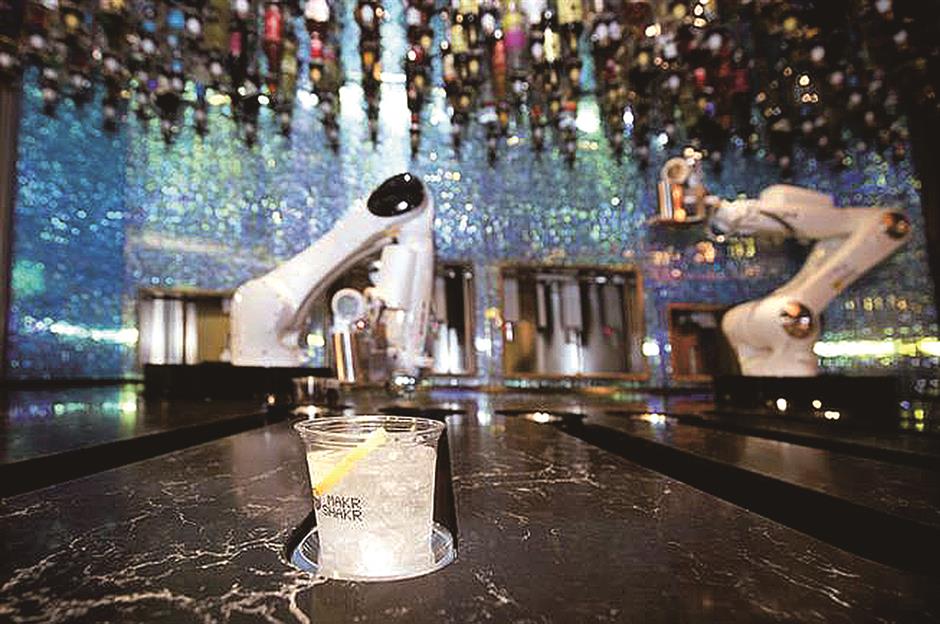 Tipsy, the robot bartender, prepares a drink at a shopping mall bar in Las Vegas. A new wave of automated machines at sports arenas, bars, hotels and other entertainment venues is surging worldwide to provide a futurist experience and save costs.

In the US, “self-service” venues such as L.I. Pour House Bar and Grill in Long Island have embraced automation by allowing customers to pull their own pints and pay via a computer terminal.

The boss there, Anthony Pallino, points to the need to economize and control costs at a time when the minimum wage is set to rise to US$15 an hour.

“If you needed five or six servers on a normal night, now you need four,” he said, estimating savings of thousands of dollars a year with each electronic server.

Automation always brings with it concerns over unemployment, yet back in Las Vegas, customers seem to have taken to Tipsy.

“Robots and automation are definitely a quicker and an easier way. The drinks are always the same. You can add a little extra if you want to for the machines, so it makes it really cool,” said John Woodall, a tourist from Tennessee.

“This is the future,” added Las Vegas resident Mauricio Letona — but not everyone is sold on the new world.

French tourist Antoine Ferrari thinks it is “cooler to have a drink when there is someone behind the bar,” although he ackowledges Tipsy’s unique selling point, the novelty of a “slightly futuristic” drinking experience.

Italian Rino Armeni, president of Robotic Innovations and owner of the bar where Tipsy works, is conscious of the imperative to retain the human element of going for a drink.

“The first thing that I said to my staff when we opened, I said: ‘Look, remember one thing: These robots are entertainers, but people will come back because of you’,” he said. “I don’t want to go away from human nature, the human rapport. That will never change.”

Experts expect jobs to disappear as this latest front opens in the race for automation, but say there is little chance that the trendy, tattooed mixologist will ever be a relic of the past.

“The bartender has numerous tasks: Chat with the clients, decide when to not serve them more drinks, make sure they don’t reach over the bar and steal bottles or drinks, collect payment.”

Androids can perform few of these tasks to a human level of competence, he adds, so choosing whether or not to automate will always be a simple question of balancing costs and benefits.

A machine may cost a one-off US$100,000 to perform just one limited task while a human barman might cost US$30,000 a year but offer a much wider range of skills.

“A lot of the experience of going to bar is talking to the bartender,” said Richard Korf, another professor at UCLA.

“They are often attractive and talk to customers, you can tell them your problems et cetera.”

The ideal places for automated bartenders, he maintains, would be venues where the goal is not social interaction, such as concerts.

“There will be situations where using these robots will increase the quality of service,” agreed Pamela Rutledge, an expert in media psychology.

But she adds that being recognized by the staff “creates a kind of social connection, it makes you feel like you belong.”