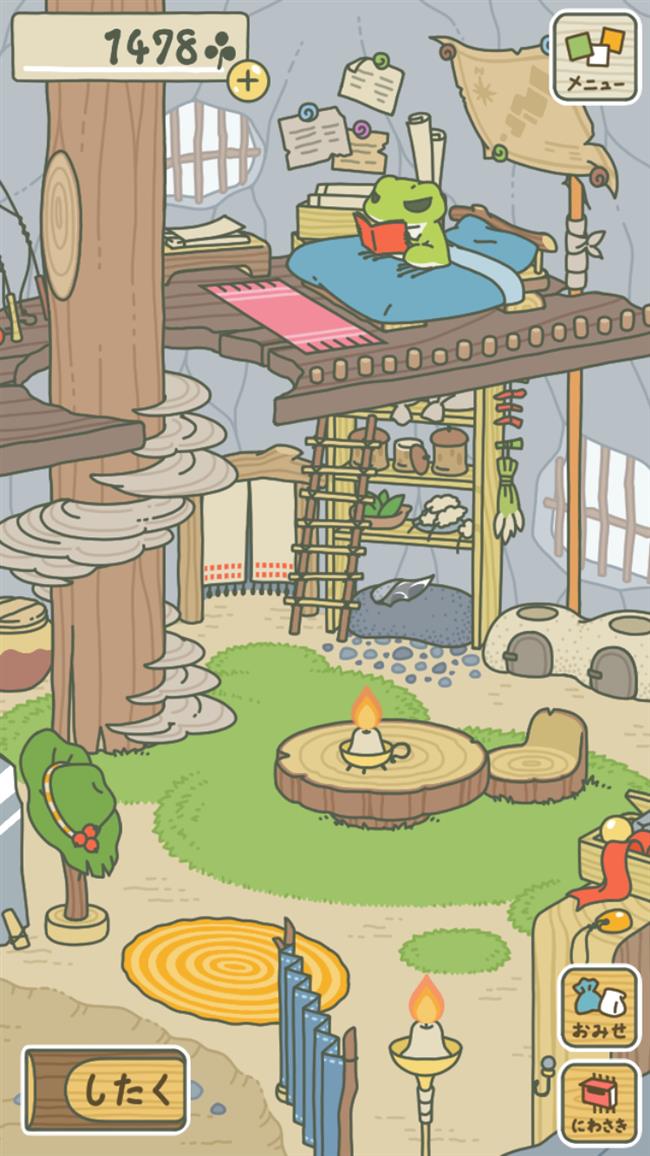 “Traveling Frog” is the first Japanese game with no Chinese translation to make it to the top of the free game chart in App Store.

While battle hits like “King of Glory” dominated the Chinese mobile game market last year, the tables seem to have turned somewhat in the new year.

In January, the most talked-about games were either about a traveling frog or about winning big prizes through trivia quizzes. These two formats, interestingly enough, reveal opposite mindsets of players.

“Traveling Frog,” produced by Japan-based Hit Point, is the first Japanese game with no Chinese translation to make it to the top of the free game chart in App Store.

Released last month, the game has drawn more than 10 million downloads, and 95 percent of the clicks are from China. It is so popular that a copycat version appeared in App Store soon after, though it was quickly removed for copyright infringement.

Hit Point has announced that the company will release Chinese and English versions of the frog game soon.

“This game is quite different from the ones I used to play,” says Tu Zijun, a 30-year-old doctoral student in Shanghai. “Players don’t have to spend much time on it, but it is kind of obsessing.”

The gameplay is simple. Players collect virtual clover that grows in the frog’s garden and use it to buy supplies for the frog’s journeys.

They don’t control where he goes. The frog sends back photos and souvenirs from his trip, which players collect.

The frog returns home from time to time, without advance notice, where he goes about his business, writing a journal or eating at a table.

The frog never interacts with players. He just picks up his backpack of provisions and heads off on another adventure whenever the mood strikes him.

Tu says the game at first sounded boring to her. But as other people started talking about it, she decided to give it a try.

“The most attractive thing about the game is that you slowly form a bond with the frog by watching its journeys,” she says. “Although you and the frog never communicate, you know what happens during the trips because of the pictures it sends back, showing it making friends or getting lost.” 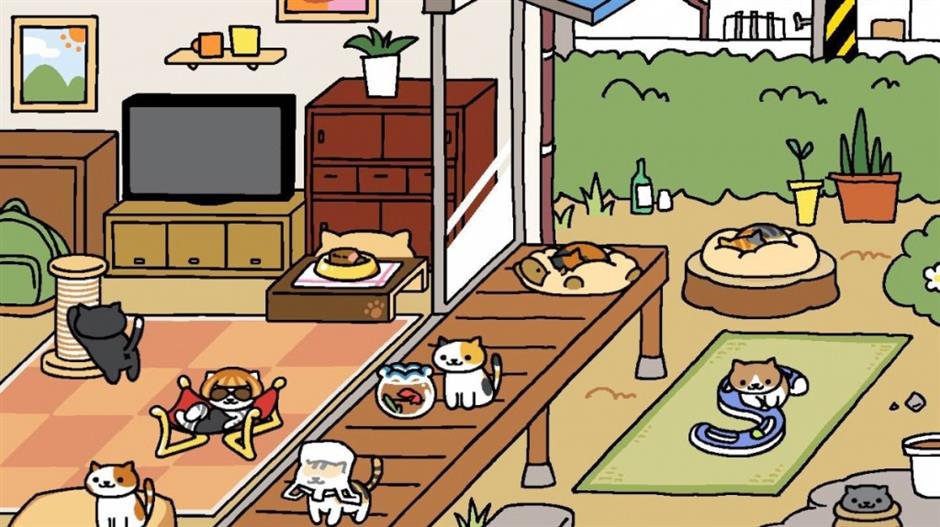 In fact, “Traveling Frog” is not the first “idle participation” game to catch the public’s fancy. Hit Point’s previous offering, “Neko Atsume: Kitty Collector,” is also widely popular. There, the players’ only task is to put food, snack and toys in a backyard to attract cats of different appearances. In the past four years, the game has drawn nearly 20 million downloads, and China is one of its largest markets.

The popularity of such games has provoked some intense discussion online. Several Chinese mainstream media platforms have suggested that the popularity of “Traveling Frog” signals that China is on the verge of becoming a “low-ambition” society, with an increasing number of young people content with a virtual world and a frog that doesn’t even talk.

“We should be on guard about the attitudes of young people now,” said a commentary published in Zhejiang Daily. “Many people now don’t have any ambition to make a decent living or start a family. Rather, they are content to be a NEET at home.”

The British term NEET is shorthand for young people who are “not in education, employment or training.”

It is, of course, arbitrary to judge a whole society by just one game. Critics might want to take back their words if they considered two other popular mobile games: “Cheese Man” (zhishi chaoren) and “Race to the Top” (chongding dahui).

The two live trivia quiz games — quite similar to the app “HQ Trivia” broadcasting in the United States — have attracted millions of downloads since they were released last month.

The gameplay is no more complicated than “Traveling Frog.” Players go online at a scheduled time and take part in a trivia quiz. They are washed out of the competition if they give an incorrect answer. The final winners, who get every answers right, split the prize pool. If no one makes it, the prize pool enlarges for the next round.

The biggest attraction of such games is the prize. Wang Sicong, son of Wanda tycoon Wang Jianlin, announced last month that he would invest 100,000 yuan (US$15,814) for a round of trivia in “Race to the Top,” and it attracted 250,000 people to the game. 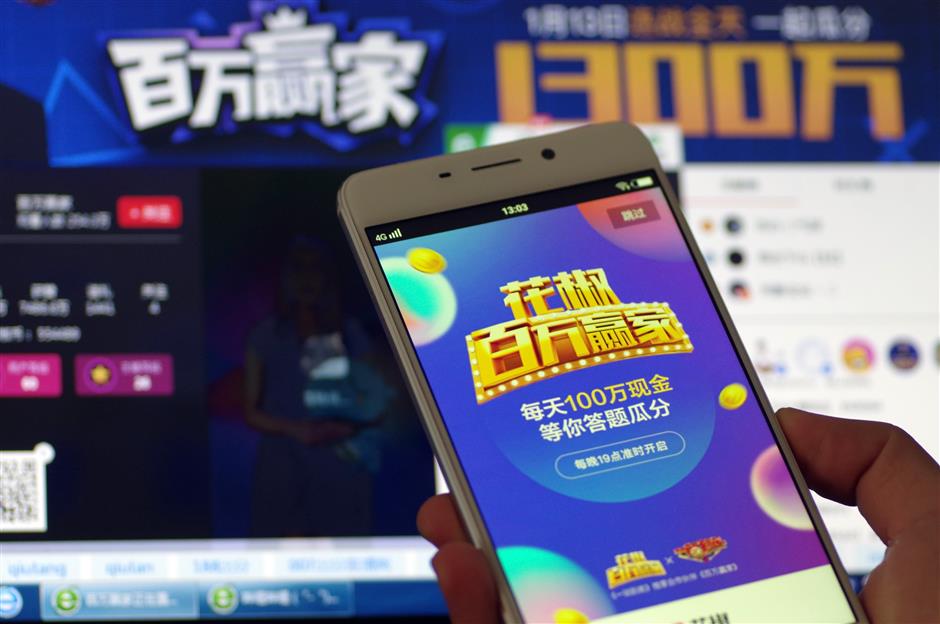 A man is ready to try his luck with "Cheese Man," a live trivia quiz game.

Meanwhile, “Cheese Man” announced that players would have the chance to win prizes of as much as 1 million yuan. Since then, trivia quiz has become all the rage. Unlike the frog watchers, quiz contestants are driven by a strong desire to win, even though most of them don’t make it or win only small sums.

“These apps know how to lure more people in,” says Veronica Zhang, a local white-collar worker. “The apps provide ‘extra lives’ for players, allowing them to continue playing even if they get an answer wrong. The way to get ‘extra lives’ is to invite more people to play the game. The more you invite, the more coupons you get. My WeChat Moments are full of these invitations, which is quite annoying.”

With money and ambition afoot, fraud and methods of cheating abound online. Tools for cheating started flooding e-commerce platforms, but most of them don’t really help that much.

A player uses a tool to answer trivia questions by looking up synchronized answers from the tools on another device. The developers of the tools are said to have cracked the question banks of the quizzes.

“As far as I know, the accuracy of the cheating tools is not as high as they claim,” says Zhang. “I once tried a tool bought from Taobao, but it failed on some especially difficult questions.”

Game insiders predict that the popularity of “Traveling Frog” and trivia quizzes will peter out.

“There is nothing to sustain a pressing need to engage in such games,” according to a report issued by Sootoo Research, a data analysis center powered by sootoo.com, one of the biggest technology, media and telecom social media platforms. “The developers need to explore new ways to retain users.”

Well, that’s often the way with mobile games. Their popularity often fades as quickly as it bursts on the scene. Just look at the global hit “Pokemon Go.” Its craze didn’t last long. The number of active users plunged about 18 months after the game was first released.