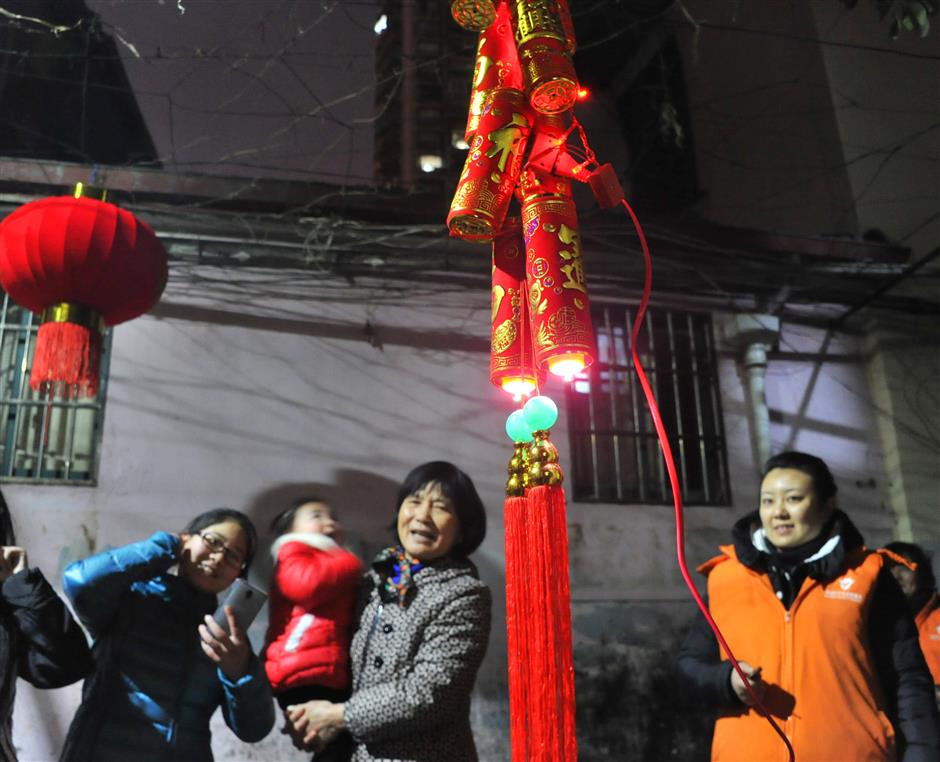 In a Shanghai back lane neighborhood, residents hung electric firecrackers last Lunar New Year's Eve after fireworks were banned within the Outer Ring Road on January 1, 2016.

Yes, that’s the classic backdrop of Spring Festival. But with each passing year, the Lunar New Year is showing that society can teach an old dog new tricks as modern urban life slowly changes our habits of celebrating.

Red-envelope money, or hongbao, is now sent with the click of a smartphone. Family reunion dinners on New Year’s Eve have moved from mom’s kitchen to restaurants. Fewer people worship their ancestors in a family ceremony held before eating. And many people prefer to use the weeklong holiday for overseas trips rather than visiting friends and relatives at home. Even the ubiquitous, deafening fireworks that once turned the night sky to day as the clock struck midnight are now banned within the Outer Ring Road of Shanghai due to air pollution concerns.

For the younger generation, Spring Festival is increasingly becoming a simplified family dinner ahead of a seven-day vacation.

Born into a big family, he recalls the rite of worshipping ancestors in the hall, with a table of food and wine set out for the departed. That ceremony came before the family sat down for the traditional Chinese New Year’s Eve feast.

After the dinner, family members stayed up late to show respect for life and learn to cherish time. In more modern times, that meant gathering around the television to watch the annual Spring Festival extravaganza. At midnight, firecrackers exploded.

Spring Festival of old was centered around various rituals of worship.

On the 23rd day of the 12th lunar month, just before the Chinese New Year, festival preparations kicked off with the worship of the Kitchen God, a domestic deity sent by the heavenly Jade Emperor to protect families and bless them with ample food supplies.

On the 27th day, people held a ceremony to worship the land, the sky, the mountains and other natural surroundings. Sumptuous dishes were prepared, and candles and incense were burned.

On the 28th day, there came the ritual to worship ancestors.

“We are rich in material wealth now, but poor in spirit and mentality,” Wang says. “We focus too much on what we eat, what we wear and what we have, but forget why. Spring Festival traditions taught us to care, love, respect and reunite, but many people today don’t want to learn that.” 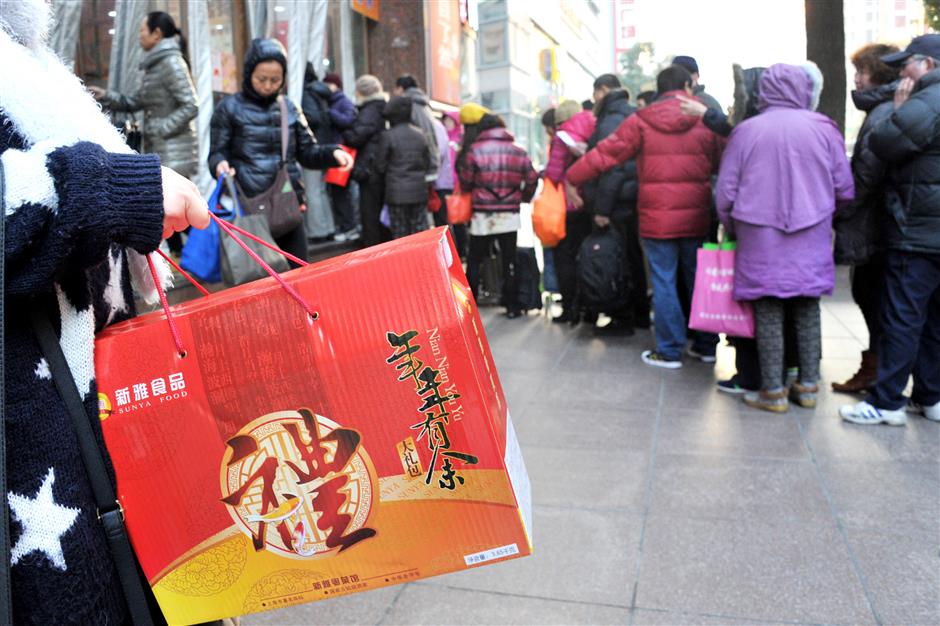 Shanghai residents line up to buy prepared meals at a famous restaurant for their New Year's Eve dinner.

Social critic Hu Zhanfen still remembers the busy scenes of people in the longtang, or neighborhood lanes, grinding glutinous rice to make dumplings and cakes for the New Year.

“A mill was not a thing that everyone could own, so it was always borrowed and passed from this family to the next,” he recalls.

A thorough housecleaning was also a must before the New Year. Decades ago, straw-and-bamboo brooms and mops of old clothing rags were used to rid a house of dust and dirt. Tables and chairs were washed, windows scrubbed and utensils polished for the coming Spring Festival. After all the cleanup, people took hot baths to be “clean inside and out.”

“Today, we take hot baths every day and an ayi (domestic helper) paid by the hour cleans homes once or twice a week,” Hu says. “In that sense, the festival isn’t as special.”

He thinks the spirit of Spring Festival is running lower than ever before, as human nature adapts to improved living conditions.

“We valued the festival so highly 30 years ago, when everything was in scarcity, because it was the only time we got to eat meat, put on new clothes and stay up all night playing games,” Hu says. “Today we do those things anytime we want. It’s human nature to chase what’s hard to get and then throw it aside once we have it.”

“Folk traditions always change with the social changes,” he says. “There is no standard to mark a truly traditional Chinese New Year because traditions long ago varied under different dynasties.”

Form may change but essence does not, Zheng says.

He points to hongbao as an example. Money didn’t really come into commonplace use until the Ming Dynasty (1368-1644), and today people transfer money around via mobile phones. 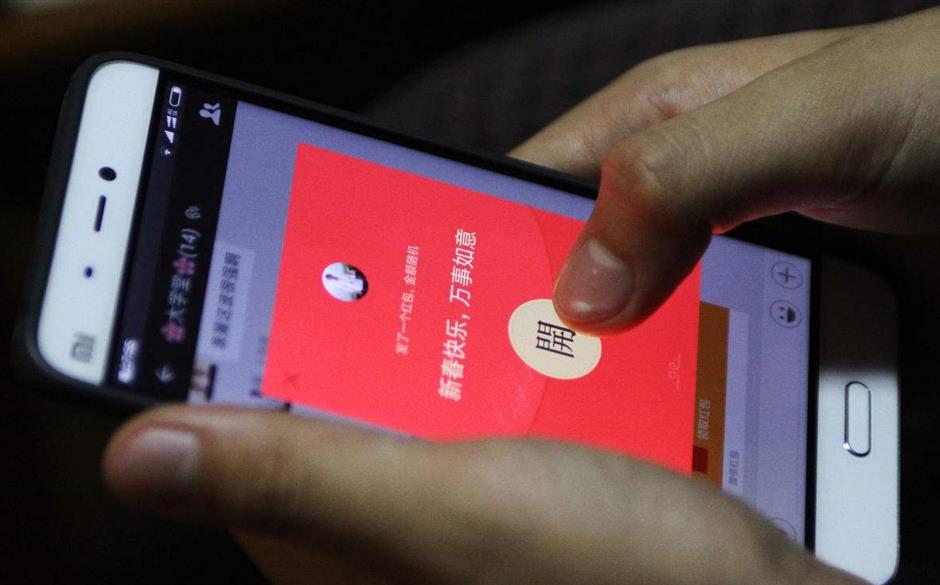 Paper red envelop of lucky money are being replaced by electric money transfers via smartphones.

“But the inner spirit of it never changes, that is to wish children good health,” he says. “Old things are gone or eliminated, replaced by new things. It’s just the way of development. We don’t need to be overly nostalgic about it or even try to revive old times. Let the past go.”

The traditional family reunion dinner is another case in point. In olden days, wives prepared the New Year’s Eve dinner. But in recent years, more families have chosen to eat the big meal in a restaurant. Bookings for that evening in major restaurants must be made well in advance.

But now, with the trend toward home-delivered meals — some prepared by experienced chefs — families are once again choosing to stay at home.

“Folk traditions have their own way of adjusting to the social environment,” Zheng says.

“Why is it that young people don’t care about Spring Festival but like Western festivals more?” asks professor Zhang Zujian from Shanghai University. “I find traditional Chinese festivals are mostly the same — we worship, we eat and we wish. What really matters is how we bridge the age gap and extend out hands and hearts to others.”

“But rest assured, Spring Festival won’t disappear, no matter how much it changes,” says He Chengwei, vice chairman of the Shanghai Federation of Literature and Art Circles. “It’s a special time to bid farewell to the past year, past failures, past heartbreaks and welcome a fresh start, a new era and a bright future.”

﻿
Special Reports
﻿
61832
,
Guide for overseas Chinese students during COVID-19 pandemic
A cemetery that celebrates life and death
Nile threatened by waste, warming, dam
Enchanting abode in idyllic tranquility
Connecting nature, culture and people with design
Fancy footwork: An embroiderer finds her niche
How overseas Shanghainese go through outbreak
Counseling eases psychological toll of outbreak
'Support troops' guard the doors to the city
A guardian of the light ... and of hope for Wuhan
EXPLORE SHINE