When Shanghai-based Dolphin Credit was helping with credit system building for multiple institutes, the company thought that the current credit system was more about punishment — people can’t buy airline tickets or loans once their credit is ruined — than about rewards. It wanted to change that situation, and that’s how Dolphin Lost and Found was born.

Launched in 2016, the nonprofit program allows people to post lost-and-found messages on several platforms, including apps, an official WeChat account and some third-party websites. Hundreds of lost-and-found boxes have also been set up in communities, encouraging people to put items they find into the boxes.

Although recently selected as one of the best 10 charity programs in Shanghai, the developers confess that the platform is not used as much as they expected, and they are hoping to attract more users.

“We want to encourage these random acts of kindness and reward them with small prizes, such as a bunch of flowers sent to their home or discount coupons that can be used on major e-commerce websites,” says Tang Jianghao, the program's director.

But Dolphin has found that many people choose to just give up on their lost property. So far, about 70 to 80 percent of thousands of found objects have yet to be claimed.

The platform is strict about personal information leaks and false claims. Users need a cell phone number and real name authorization to log onto the website before posting lost-and-found messages that include when and where an item was lost and its description, including pictures. 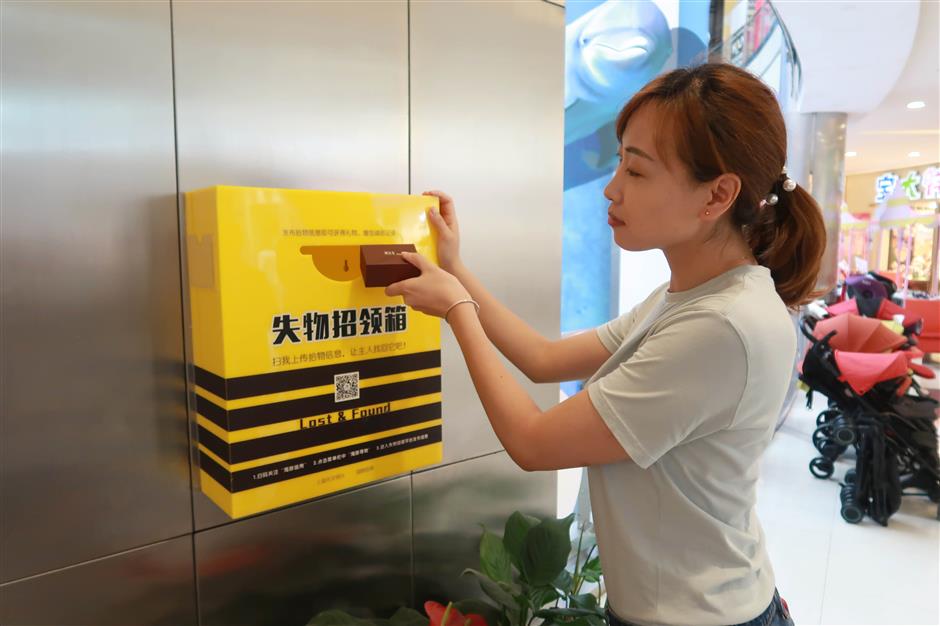 A woman puts a lost property into the lost-and-found box at a shopping mall in Shanghai.

People can earn credit points by posting lost objects messages which can be exchanged for small gifts.

“We are planning to persuade the government to add the credit points to users’ personal files as a reward for them,” Tang says.

However, he feels there is a lack of trust among people, as the developers have had some frustrating experiences with owners of lost property such as seniors’ health insurance and identity cards. Considering that the seniors might need their children’s help to report the loss and reapply for new cards, Dolphin staff tried to contact them through information from the police and offered to return the cards in person, but they were all turned down.

“They thought we were swindlers trying to take advantage of their loss,” Tang says. “They would ask ‘how did you know that I lost my health insurance card and how did you get my phone number?’ And they would by no means give us an address so that we could send them the cards.

“Finally we just contacted their neighborhood committees and ask the staff there to tell them to go to the committee office to get their cards back,” he says.

The promotion of lost-and-found boxes in communities also met with some difficulties. Since last year, hundreds of the bright yellow boxes were set up in Putuo and Songjiang districts, mostly at schools, shopping malls and residential areas. And Dolphin is working hard to promote the boxes in other districts.

“The boxes are specially made with a narrow slit in the front,” Tang says. “We make sure that even ill-disposed people who want to steal from the box can’t reach that deep.”

However, as the boxes are mostly entrusted to neighborhood committees or property managements, it is quite hard to persuade them to accept them, because “there will be a lot of extra work,” Tang says.

To get a better understanding of the lost-and-found situation in the city, Dolphin recently analyzed more than 700,000 messages and issued over 7,000 questionnaires. 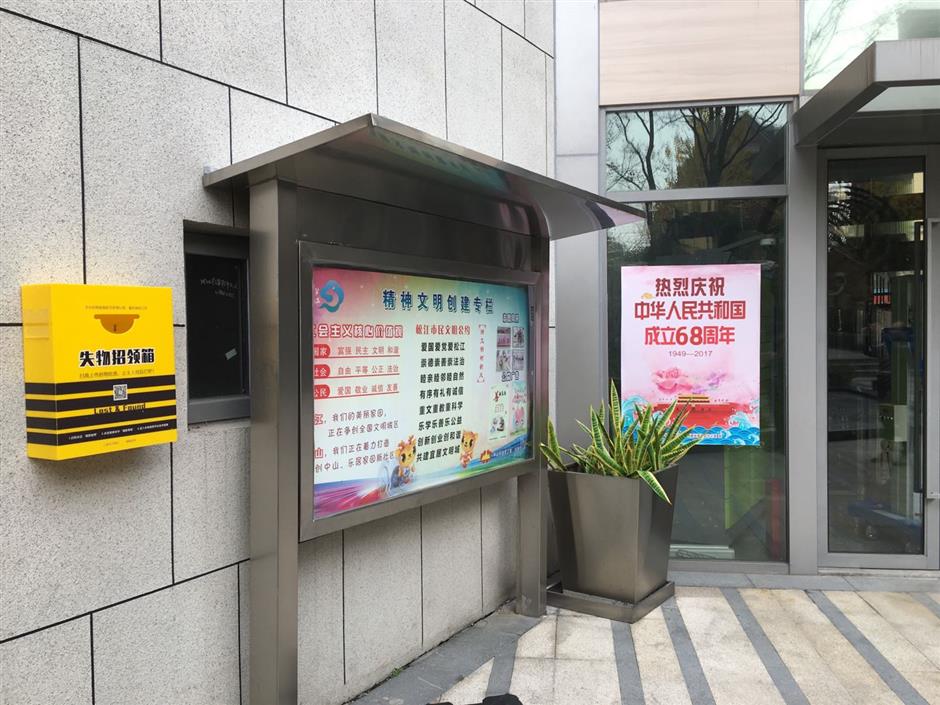 The bright yellow lost-and-found boxes can often be found in local neighborhoods.

The survey showed that people are most likely to recover items lost on public transport, business areas and hotels, and least likely in hospitals, parks and restaurants.

The city government has an official lost-and-found platform, but 95 percent of people who responded to Dolphin’s survey said they had never heard of it. Meanwhile, the number of non-government offline lost-and-found institutions is in decline. In 2016, the only two offline institutions in Shanghai closed down, and there were only two left in the entire country.

“We believe that civilian forces are much needed in this market, which has great potential,” Tang says.

Compared with other countries, according to Dolphin, China still lacks laws regulating how to deal with found items, and that’s why there are increasing numbers of disputes about lost items, increasing by about 30 percent from 2013 to 2016. Although the country’s property law mentions lost and found, the terms are vague and sometimes not workable.

“I believe everyone has some experience with losing important things, and the feeling of despair is real to all,” Tang says. “We hope our service could be known by more people so that they can get help in time of need.”

But what if one could nip it in the bud? Dolphin also has a solution. The institute developed a small gadget that can be pasted on important items, such as wallets and cell phones.

The gadget uses GPS and Bluetooth or WiFi to locate the items. Once they leave the owner for a certain distance, an alarm sounds.

“I believe the gadget can find its place in the market, even now not many people know about it,” Tang says.