More than just food, a wet market is the heartbeat of local social life 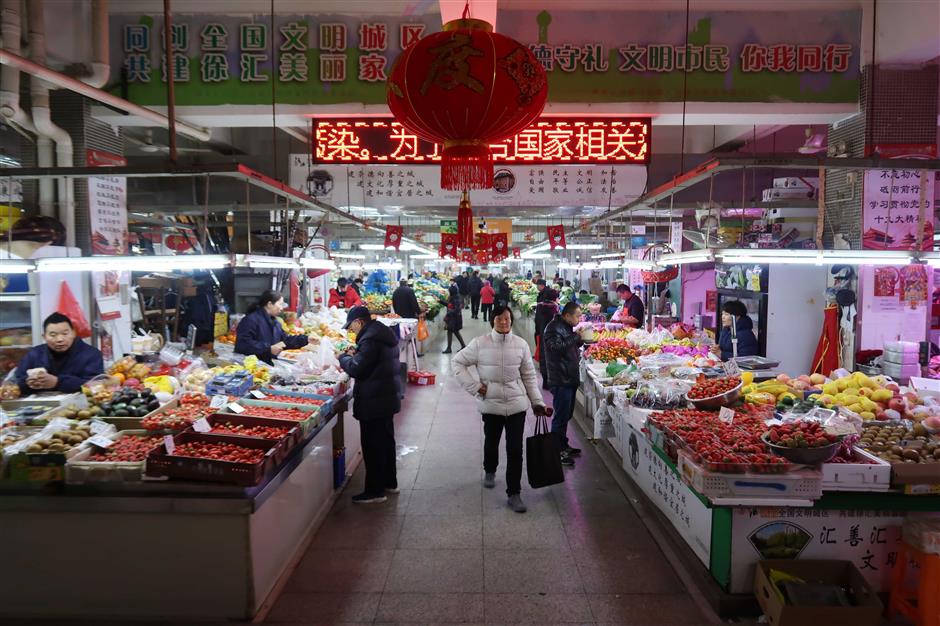 The young generation may ply supermarkets, but for older folks, nothing beats local wet markets lined with stalls selling fresh vegetables, fruit, meat and fish. Every morning, the markets are crowded.

Wandering through old Shanghai neighborhoods in the morning, you can hear women with shopping bags greeting one another with “what did you buy in the wet market today?” It’s as popular a conversation opener as the weather is to the British.

As early as 1890, Shanghai’s first wet market was called Hongkew Market, or more commonly, Sanjiaodi Wet Market. It was built at the triangle junction of today’s Tanggu, Hanyang and Emei roads.

Lin Weiyin, a local writer at the time, depicted the prosperity of the market in an article that described red, yellow, white, green, blue and purple carrots, and exotic foods like Russian bread and Japanese tofu. The market also housed a dining area frequented by locals and foreigners.

Before the existence of wet markets, local residents bought daily staples on the streets. Intriguingly, many old road names related to food sold along them, such as Doushi Street, or “bean market street,” Huotui Alley, or “ham alley,” and Mianjin Alley, or “wheat gluten alley.” They still remain in the city’s Laochengxiang, or Old Town.

With Shanghai’s firework ban, some of the sizzle has gone out of the annual Spring Festival atmosphere. On the recent Chinese New Year’s Eve, my mother took me to a wet market on Wanping Road S. where she promised I would find a festive mood.

Indeed, the market was crowded with people and decorated with red lanterns. The greeting “Happy Chinese New Year” could be heard in every corner of the market.

Walking from stall to stall, people perused the fresh ingredients that could go into that evening’s family reunion dinner, the most significant feast of the entire year.

Fish, symbolizing abundance, is an essential. The crowds around the fish stalls were the largest in the market. In terms of vegetables, tatsoi greens and the winter bamboo shoots were among the best-sellers. In the Shanghai dialect, “tatsoi” implies “escaping from pain,” while bamboo symbolizes strength.

Wandering through a wet market is an adventure in Chinese food culture.

Stopping at a fruit stall, my mother asked me to choose a pair of sugarcane, which symbolize sweetness and growth. Seeing that I was dithering, a middle-aged female customer advised me that plants with straight, thick stalks are the best.

A young couple standing next to me were looking over the fruit. The curious vendor asked them if they were married. When he heard they planned to wed at the end of the year, he congratulated them and suggested they buy tangerines.

“Eat tangerines and have twins,” he said.

Although the pair seemed puzzled by this assurance, they nonetheless bought some tangerines.

Compared with supermarkets, wet markets offer personal interactions and some distinct goods and services. For example, one can find incense sticks and candles, domestic workers looking for jobs, cobblers mending shoes and locksmiths. 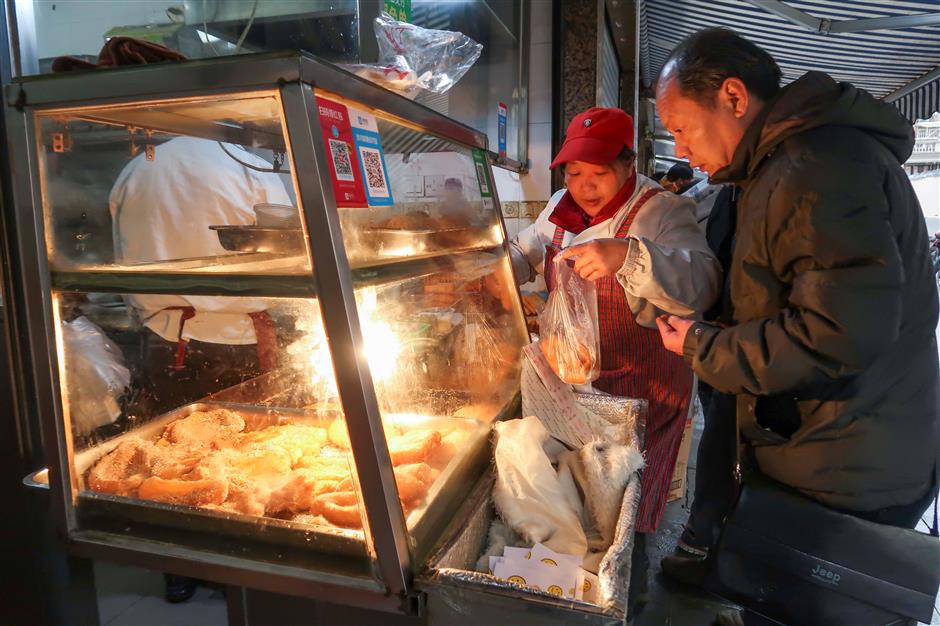 A resident chooses his breakfast at the snack bar of the wet market. 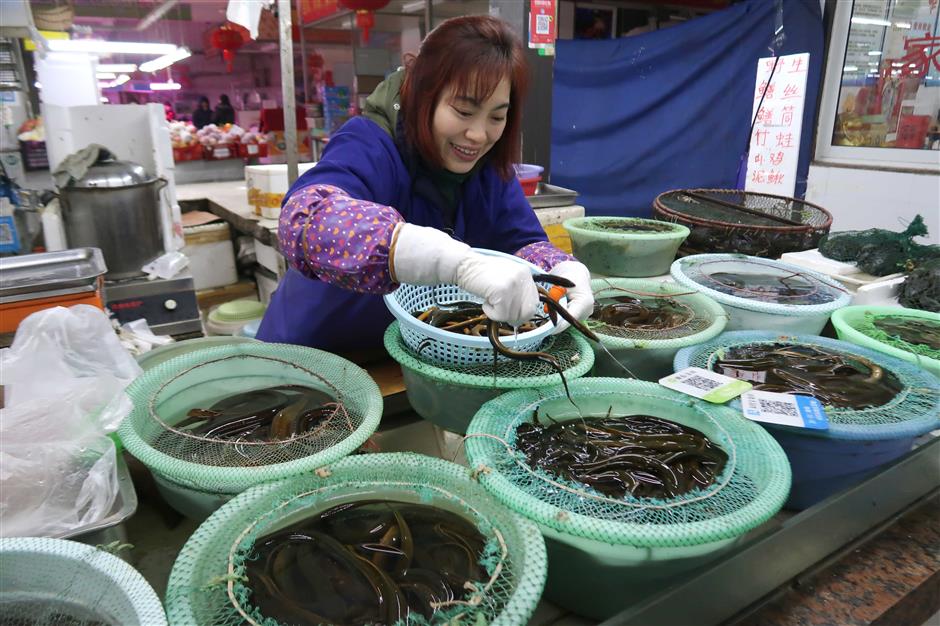 A vendor cleans Asian swamp eels for a customer.

I paid another visit to the wet market on the fifth day of the first lunar month. Unlike the bustling scene several days earlier, the place was nearly deserted. Many vendors had left town to be with families in far-flung areas of China during the holiday week. Zhao Xingqi from Anhui Province was an exception.

“I need to send ingredients to restaurants these days, so I have to stay,” said the 50-something Zhao. “But my wife returned to her hometown.”

On the recommendation of an elder sister who worked as a cleaner at the wet market, Zhao settled in Shanghai in 1999 and began to sell vegetables.

Zhao said he gets up at 2 in the morning every day and drives to the wholesale farm market in the town of Huacao in Minhang District to select produce. He arrives at the wet market around 6 in the morning to arrange the vegetables with his wife. Then he makes deliveries to restaurants.

He returns home to take a nap in the afternoon and goes back to the wet market at 6 to help his wife to pack up the stall.

A grueling schedule, but Zhao has no complaints.

“I was not a skilled person so I had to work hard,” he said. “Every day is a new day. Between being depressed and happy, why not choose the latter? A contented mind is a perpetual feast.”

Zhao’s elder sister, who was with him in the market, said everyone can specialize in something. Her brother graduated from high school — no mean feat in those days — and ended up an expert in vegetables, she said.

True to its words, the vegetable expert taught me how to select radishes and how to distinguish toothed bur clover from pea shoots. He also taught me the names of vegetables that I might have eaten but didn’t recognize.

After years of work, Zhao managed to buy a 40-square-meter apartment in 2008 in Shanghai.

“Whatever happens, I don’t want my two children to do this kind of work,” said Zhao. 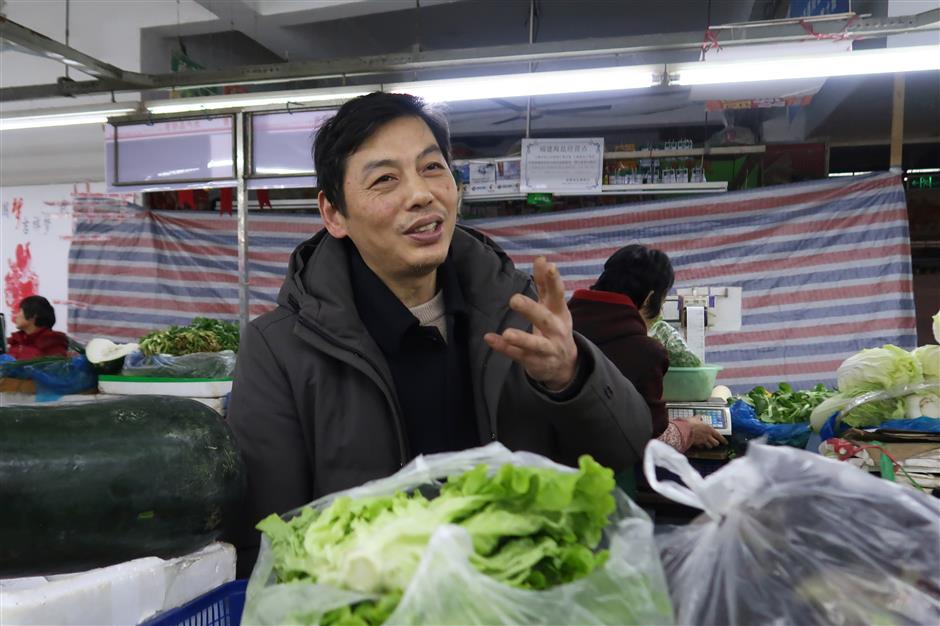 Zhao Xingqi from Anhui Province has been selling vegetables since 1999.

Market vendors are the salt of the earth — hardworking, upbeat people. Many come from other parts of China, seeking a better life for their families in the metropolis.

After the weeklong holiday, I went back to the market, where I encountered a flower vendor surnamed Feng, 51. She was removing thorns from roses. With Valentine’s Day nigh, she was quite busy.

“In the very beginning, I came to Shanghai to visit my relatives,” Feng told me. “Later, I became a migrant worker, but after several years, I wanted to strike out on my own. So I decided to open a flower shop because rents were cheap at the wet market.”

She told me she often goes to a wholesale flower market in Baoshan District at 4 in the morning.

As we chatted, a security guard stopped to order 11 roses. That number symbolizes “one heart, one soul,” indicating that he loved the woman in his life dearly.

Unlike upmarket flower shops selling exotic plants in delicate wrapping, Feng’s tiny, somewhat shabby stall is stocked with common blooms like lilies, carnations, hyacinths and kumquat. They cater to the preferences of her customers, who are mainly middle-aged or elderly local residents.

“I thought that being a flower shop owner would be a cushy job at the very beginning,” she said. “But, in fact, it is very laborious. When I look at the flowers, I no longer appreciate their beauty. I am only eager to sell them. My attitude has changed. Every vendor works hard here.” 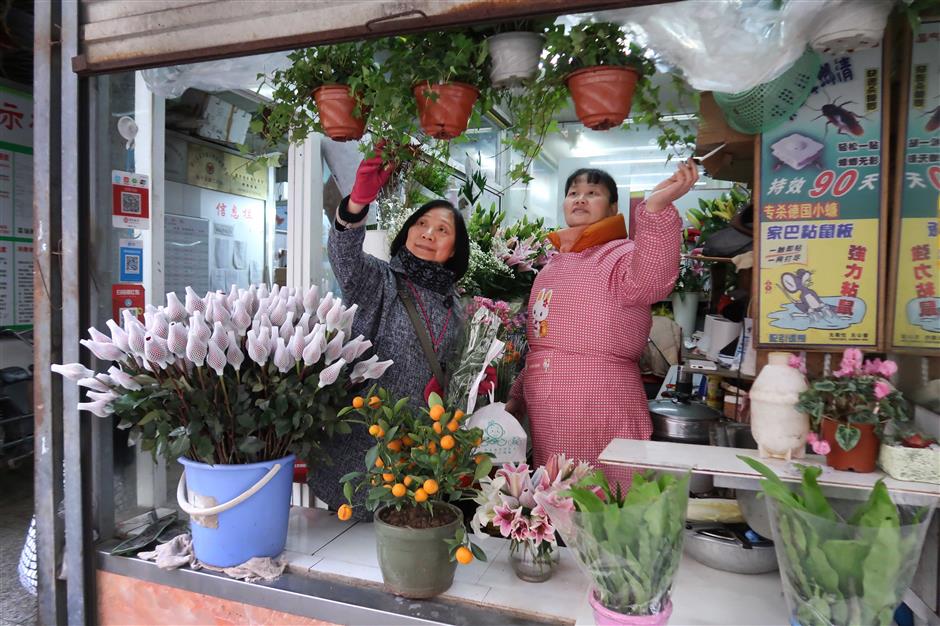 With its myriad stalls, the wet market is tidy and bright. Gone are the wet floors of old days. In the fish area, vendors were busy cleaning freshwater catches. In the meat area, flanks were hung or placed on tables, according to the body parts of animals.

There are around 25 stalls selling vegetables in the market. Pan’s stall was among the most crowded. One of his regular customers asked the owner, surnamed Pan, after his mother-in-law, who used to sell vegetable in the market as well.

“She is 73 years old,” Pan replied. “I don’t want her to have to work here anymore. However, she still works at home. The vegetables I sell are not from wholesale markets but rather come from the gardens of my motherin-law or our neighbors. My family has 2,001 square meters of farmland in Pudong.”

Pan adds a small bunch of free scallions to every order. It’s a common gesture at the market to build relationships with customers.

For the vendors like Pan, fast arithmetic, a good memory, excellent communication skills and a knowledge of cooking tips are basic requirements.

“The wet market is a stage of social life,” said Zhao’s wife, Han Xuemei. “People from all walks of life can be seen here.” 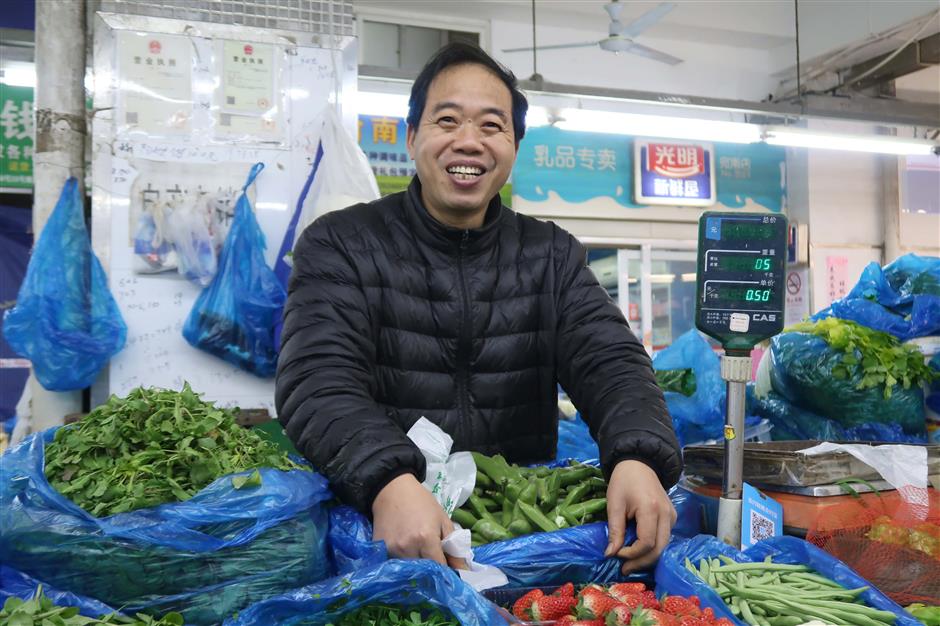 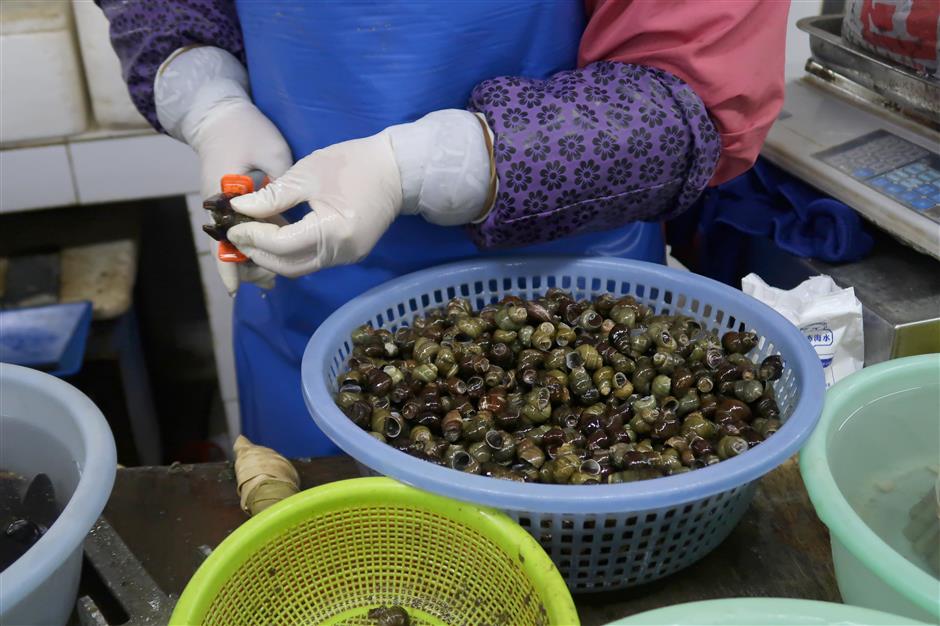 A vendor shells river snails for a restaurant.