Wu has a full-time career ... as stay-at-home mom

When Wu Yanqing, a stay-at-home mother, gave birth to her second son Xiaoxiao in 2016, her elder son Dada was 10 years old.

During her second pregnancy Wu was 37, and a woman of advanced parental age according to the medical term for women over 35.

“I remember when Dada was little, I got up many times easily to feed him during a night, and I was still full of energy the second day. But after 10 years this time, I felt it obviously harder for me to get up during the night, and I was always tired during the day.

“The most difficult time for me was Xiaoxiao’s first year,” Wu said, “I was always busy for a whole day and till it turned dark, I discovered I did not step out of the door, and I even did not wash my face. All I felt was exhausted.

I did not hire a maternity matron. My husband helps me a lot. He is awesome.

“My husband helps me a lot,” she said. The first month after Xiaoxiao was born, her husband stayed home for almost three weeks taking care of her and the children. Wu said: “I did not hire a maternity matron. My husband is awesome. He asked for leave and used up all his holidays that year.”

Wu’s husband, Zhang Peng, an executive with a foreign company, is still in charge when it comes to feeding Xiaoxiao and telling him stories. And he tutors Dada in English and math every evening after work. “I know my wife’s hardship, so I’m trying my best to do more for her, and let her have time to keep fit and relax.”

Thanks to her husband, Wu is able to go to the gym in her neighborhood six nights a week. “Exercise is my hobby. I like the feeling of sweating,” Wu said. It helps her relax and stay healthy.

“As a full-time mother staying at home all day, I have many trivial things to handle. But when I am doing exercises, I just need to focus on myself. I can release all the stress in one hour of keeping fit.

Wu leaves home around 7:45pm for the gym and it’s usually 9pm when she comes back. Xiaoxiao is already asleep and Dada is doing his homework in his room. A quiet and peaceful moment for the family.

When Zhang Peng is home from work, he helps with his elder son's homework and reads stories and prepares milk to the younger boy before he goes to bed, allowing his wife time to go to the gym.

“To have a younger brother is my wish which is inspired by my mother. She hopes there can be a companion to grow up and enjoy life with me together...”

This is the start of Dada’s composition named “My wish.” “If I do not know what to write, I will use my younger brother to be my composition’s main role,” he said with a smile.

Wu recalled: “Once Dada asked me: ‘Many of my classmates and friends have their brothers and sisters, why I only have myself? No one is with me to play in holidays, and I feel lonely.’”

Wu has a younger sister, and her husband has an elder brother. “To us, a family with only one child is strange, and it was natural for us to have a second one,” she said.

Wu remembers the first time Dada saw Xiaoxiao in the hospital. “Dada was happy and excited to see his brother, while I saw more worry and care in his eyes for me. Xiaoxiao was born by cesarean and I could not move that time in bed. He was worried about me. At that time, I knew my tender boy would surely welcome the newcomer. ”

Last December when Xiaoxiao was 2 years old, Zhang was on a business trip and Wu had to attend Dada’s parents’ meeting. Dada stayed at home, taking care of his younger brother.

“I was surprised to see Dada was cleaning up Xiaoxiao and changing his diaper, unhurriedly and calmly,” Wu said. She was watching the whole procedure on her cellphone connected to a camera in the house when she was at the meeting. “I asked my husband to watch this immediately, and I was so excited and moved. He never did this before, and this was the first time Dada had changed a diaper for Xiaoxiao,” Wu said. “So it’s natural. The emotion between brothers is inherent and innate.”

She added: “I hope one day my two little boys will be reliable men. Be responsible for themselves and for their other halves. Be a man just like their father.” 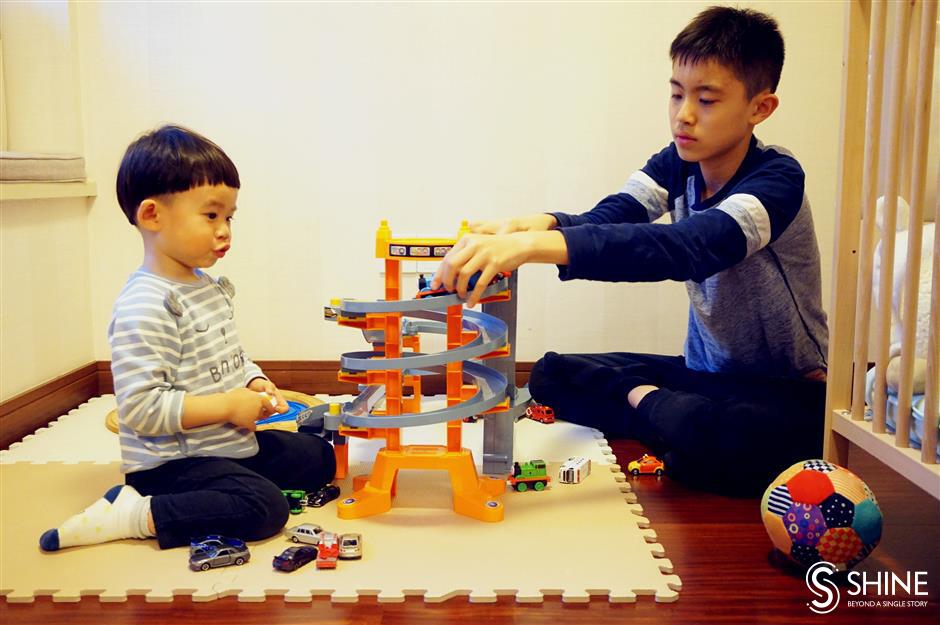 Dada plays toy cars with Xiaoxiao. Every day after school, Dada usually plays with his younger brother for 15 minutes before doing his homework.

Full-time mother is a tough job

Wu remembers her worry when she first became a stay-at-home mother.

“I had a sleepless night the day I quit my job, wondering about when I could go back to work. I will be old, is a company still willing to hire me? The second day I was jobless, after my husband and Dada left the house, I did not know what to do. It was like that for three days.”

As a full-time mother, never give up on yourself.

Now, Wu consider being a full-time mother a job, and she hopes society can have a fairer understanding of stay-at-home mothers like her.

“These mothers are not idle at home. Raising children and managing the home is also a hard job,” Wu said. “My husband will give me four-to-five days a year as my holiday. I can go anywhere I want and do nothing. He will ask for leave and stay at home to take care of the children.”

Wu said these holidays are important to adjust herself and return refreshed to her full-time mother’s job. Even though, Wu mostly takes care of her children for the rest of the time and worries about not having enough time to herself.

“No time to learn, no time to read. I want to return to work one day, for I still have demands of myself.” Wu's advice to stay-at-home mothers: “As a full-time mother, never give up on yourself. ” 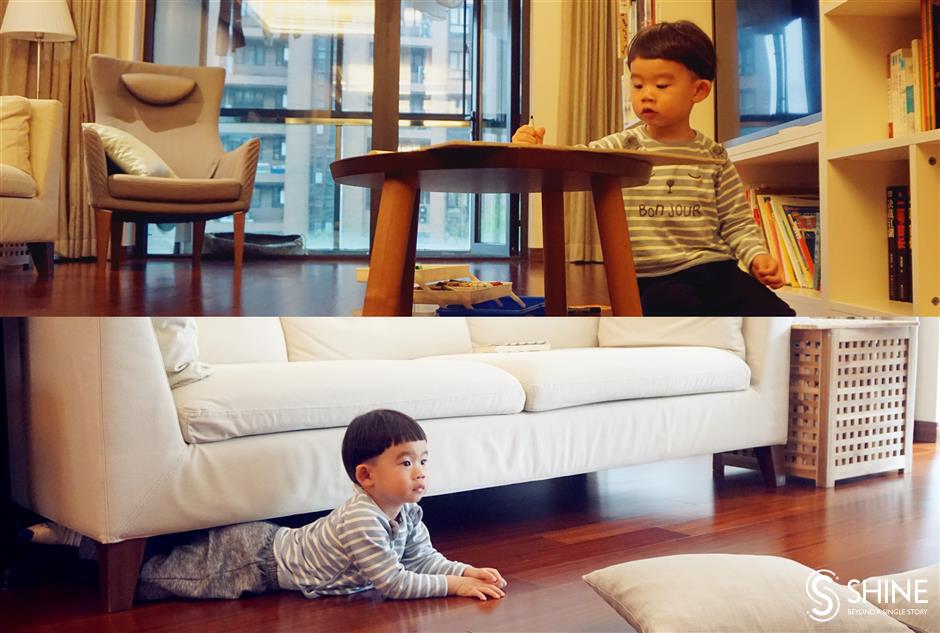 Xiaoxiao occupies himself by painting pictures (top) or watching cartoons when his mother needs to do housework.

After getting married in 2004, Wu followed her husband to Japan when he was working in Tokyo. Wu learned Japanese, gave birth to Dada and passed Japanese college exams. She went back to college, majoring in preschool education, when Dada was just 3 months old.

Wu said a retired Japanese woman around 60 was her classmate during her studies in Tokyo. “No matter when, it’s never late to chase our dreams and ideals," Wu said.

“One day, I will be back to society to do what I want to do, no matter a paid job or as a volunteer,” she said. 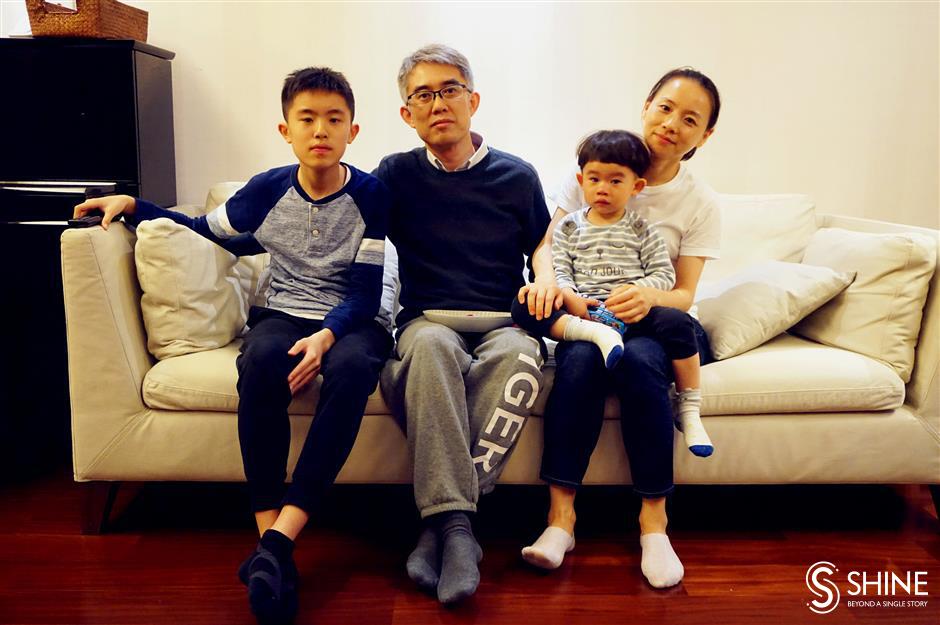