Here's to a healthy body, a mind at peace 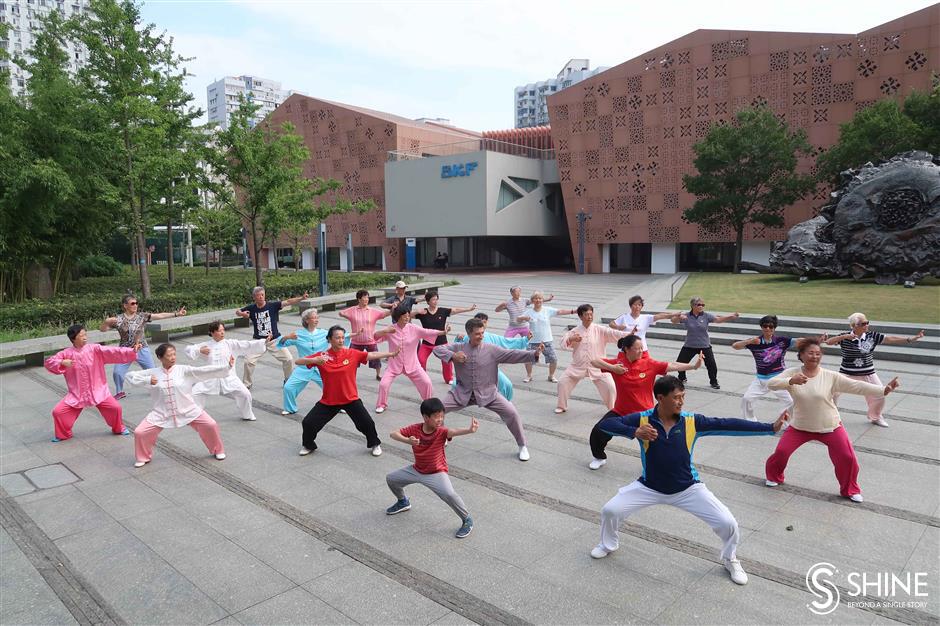 People of different ages and nations practice tai chi together.

It’s eight on a Sunday morning, and Argentine expat Juan Martin, 58, arrives at Huoshui Park in an area of the former World Expo site. After warming up and taking a sip of Chinese tea, he is ready to do tai chi with other lovers of the martial art.

“I am always the first one to arrive,” said Martin, who is wearing a tai chi uniform with a Chinese flag sewn on one sleeve. “Tai chi is one of reasons I stay in the city.”

The group that gathers with him all live in the same neighborhood. These tai chi practitioners are members of the Wuhai Tai Chi and Qigong Team, which was officially established in 2015 by Kong Zhaosu.

“I like tai chi, not only because of its health benefits but also for the spirit embedded within it,” said Kong. “It conforms to nature and is indifferent to fame and wealth.”

Based on his surname, it is natural to assume that Kong is a descendant of Confucius. Kong acknowledged that at age 65, he is about the 70th descendent of the ancient sage, whose real surname was Kong.

Probably it’s a cultural gene that has seeped deep into his bones. Whatever the reason, Kong has been fond of traditional Chinese culture since his childhood and has read many Chinese classics, such as “The Analects,” “Di Zi Gui,” “Three Character Classic” and “Tao Te Ching.” Along the way, he has learned Shaolin kung fu.

About 22,000 kilometers away across the oceans, Martin shared the same passion. He practiced Shaolin kung fu in Argentina, beginning at age 17. He was taught by a Taiwan tutor and became equally captivated by Buddhism.

In 1983, Martin bought a one-way ticket to Asia and has spent 20 years on and off here.

“Since the first day I encountered Chinese martial arts, my love for it has never wavered,” said Martin. “I yearned for the peaceful life in Asia. Religion was another reason that drove me here. I visited Thailand, Japan, India, Indonesia, the Philippines and Nepal over the years.”

It is interesting to note that Martin practiced Chinese martial arts long before learning the tango, which he later studied at the National University of the Arts in Argentina.

“Both tai chi and the tango are gentle and smooth,” he said. “Once I am immersed in either of them, my mood mellows. Tai chi allows me to ‘see a bigger picture’ and find myself.”

Martin has been in Shanghai for three years as a tango teacher. In very Chinese style, he always eats a vegetable bun and drinks a cup of soya milk after practicing tai chi.

He said he often sits on benches in Shanghai parks to observe elderly Chinese engaging in leisure activities, including martial arts.

“Their movements might not be standard, but their passion is encouraging,” he said. “The public parks in Shanghai are so vibrant.”

Martin doesn’t speak Chinese but is quite fluent in words related to Chinese martial arts, such as gongbu, or “bow stance,” xubu, or “empty stance,” and mabu, or “horse stance.” Meanwhile, Kong does speak some English.

“I learned it when I was young,” Kong explained. “I didn’t expect that I would be using it after my retirement.”

Rehearsing a qiwu, or “qigong-dance,” performance for the August 8 observance of National Fitness Day, Kong said he is learning some new English vocabulary related to the dance formation through a translator app on his mobile phone.

“There is no language gap at all,” Martin said. 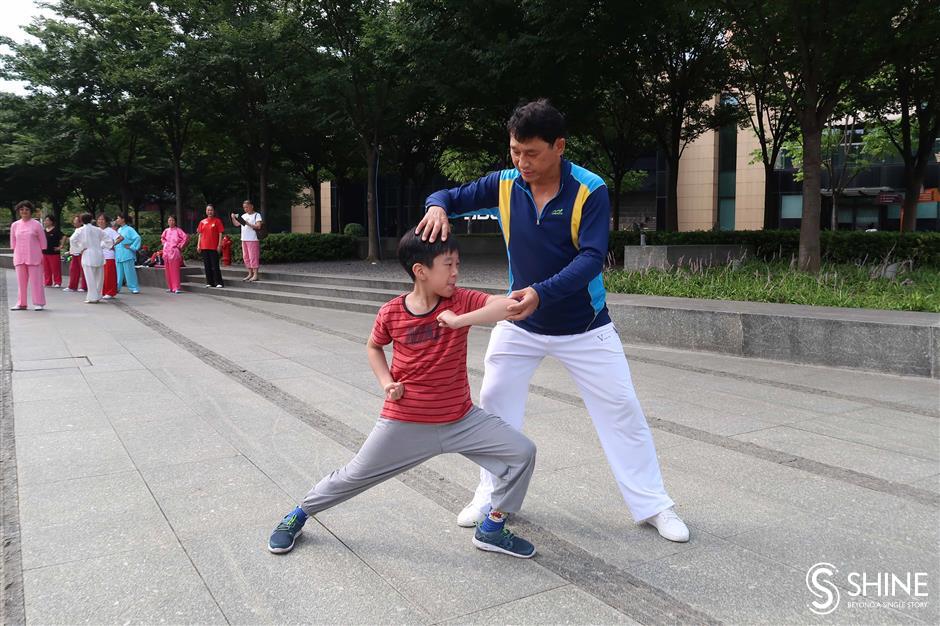 Kong Zhaosu, a descendant of Confucius, enlightens a 9-year-old boy.

According to Kong, the average age of the team is about 63 years. Practicing tai chi might seem like an exercise largely reserved for the elderly, but one 9-year-old boy begged to differ. Standing in the front row, the boy, drenched in sweat, was doing his favorite movement — standing on one leg.

“I began to learn tai chi last September,” said the boy, named Zhu Xi. “I didn’t like tai chi very much at the beginning because it was too slow and I felt like a turtle. But now I love it!”

Zhu said he gets up at 6:40 every weekday morning to practice a set of tai chi movements twice. He does it another three times after school. Every Sunday morning, he takes tai chi lessons given by Kong in Huoshui Park.

“Zhu’s father met me in the park and asked me to teach his son tai chi,” said Kong. “Instead of seeking some speed-up lessons, Zhu’s father told me that tai chi is a lifelong study, which I strongly agree with. I always teach students how to behave first and then how to do martial arts.”

Both qigong and tai chi are Chinese exercises, integrating slow and gentle movements with breathing and meditation. They help exercisers cultivate and enhance qi, or “vital energy,” and facilitate its flow throughout the body.

“The numbness I often feel in my fingers and hands is relieved after practicing tai chi,” Xu Hua, 76, told me. “There is also an octogenarian in our group. She practices every day and is just like a young person.”

Another woman in her seventies also shared the benefits of tai chi with me.

“In 2000, I almost couldn’t get out of bed because of leg, spinal and shoulder pain,” said Xu Huifang, 72. “But after practicing tai chi for three months, I was able to put on and take off my clothes by myself.”

Xu has been practicing Mulan Quan, a modern form of tai chi created for women, for almost 20 years, and leads a team of fellow practitioners in the Xietu neighborhood. The group is like an extended family. Team members call her “big sister.”

“If it were not for tai chi, we wouldn’t have gotten to know one another, even though we live in the same community,” said Xu Hua. “After class, we often wander the wet market together. If someone doesn’t appear for a couple of days, we visit her apartment to check that she is all right.”

Apart from doing exercise together, the group also organizes leisure activities such as countryside trips, karaoke and dinner parties. 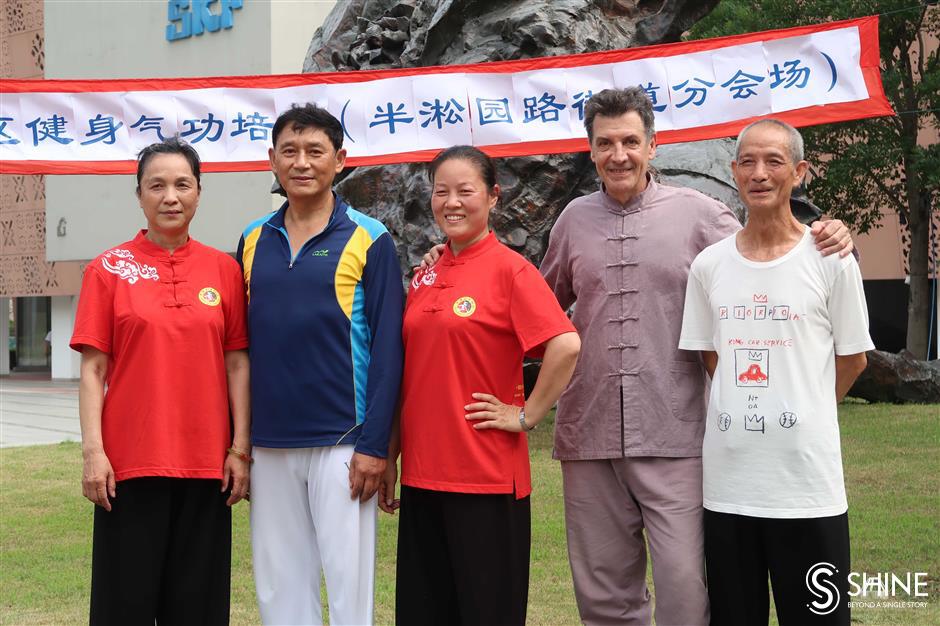 The team is an extended family for the martial art lovers.

“Our happiness index soars,” said Kong. “Living alone, many elderly people have found friends to talk with in the group. The mutual assistance also raises their sense of well-being.”

Kong hand-writes teaching plans every night, referring to the fundamentals of movements, the culture of tai chi and the ways to correct wrong posture.

“To be honest, I am much busier now than ever before,” he said.

“I want to show the public ‘real’ tai chi. Although there are a lot of people who do tai chi, many do the movements wrong. When a lie is told 1,000 times, it may become a truth.”

He said he welcomes young people as well as foreigners to join his team.

﻿
Special Reports
﻿
61838
,
Guide for overseas Chinese students during COVID-19 pandemic
A cemetery that celebrates life and death
Nile threatened by waste, warming, dam
Enchanting abode in idyllic tranquility
Connecting nature, culture and people with design
Fancy footwork: An embroiderer finds her niche
How overseas Shanghainese go through outbreak
Counseling eases psychological toll of outbreak
'Support troops' guard the doors to the city
A guardian of the light ... and of hope for Wuhan
EXPLORE SHINE