A dated interior has been transformed into a contemporary family home of four thanks to the smart design by Clifton Leung.

Homeowner Johnny Yip and his wife Penny like the house because of its generous size, with lots of privacy. They had designer Leung help them out with a previous house design and couldn’t be happier with the final outcome of this second house project.

“It was so run down when we first bought the house, Leung and the team made the renovation fun and worry free,” Yip said.

It took Leung a year to renovate the apartment. The house had barely been touched since it was built in the 1980s.

The living room features designer sofas and armchair from MorriSofa and concrete coffee table and side tables from Indigo Living.

“It was very run-down and dated. So, I changed the layout totally. Rooms are reassigned and considered alterations made — a skylight at the dining room, a set of bi-fold doors in the living room and walk-in wardrobes everywhere,” he said.

The team rebuilt and upgraded the house. The electricity had a modern use upgrade and all the piping work were redone.

“It’s an extensive renovation from the terrace to the interior,” Leung said. “A nautical home away from home atmosphere is created here.”

The accommodation in the split-level house is arranged over six and a half floors. With so many levels to play with, the central staircase became a key element of the new look. Out went the narrow stairs and metal balustrades and in came a single slim-line balustrade with wooden handrails. 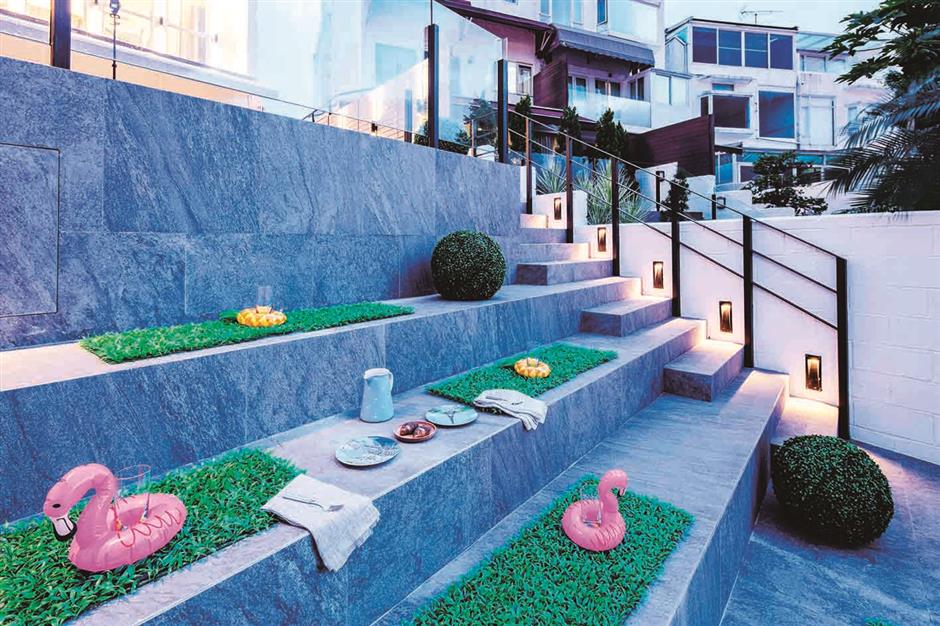 A series of large and small steps were installed leading from the terrace to private floating dock at the edge of the marina.

On each level of the house, Leung maximized the size of the windows, to bring in more natural light, and installed fuss-free white blinds to keep the look clean. Just as neat is the cove lighting, aided by accent lamps and downlights.

Outside, Leung installed a series of large and small steps leading from the terrace to the private floating dock at the edge of the marina. Now it is a more interesting use of the space. It’s a gathering place for family and their friends, somewhere the kids can have picnics.

“But it’s the large kitchen-diner that is the heart of the home,” Leung said.

By moving the helpers’ quarters to the ground-floor lobby, Leung was able to reclaim the space for a “dirty kitchen” behind an opaque grey glass sliding door, which contains cooking smells and hides the washing up.

The main kitchen is focused around a large island, fitted out with a breakfast bar, wine fridge, drawers and USB sockets and a phone-charging area.

Adding interest to the palette is an accent area displaying open wooden shelving, which is repeated in the wooden wine rack at the end of the island. 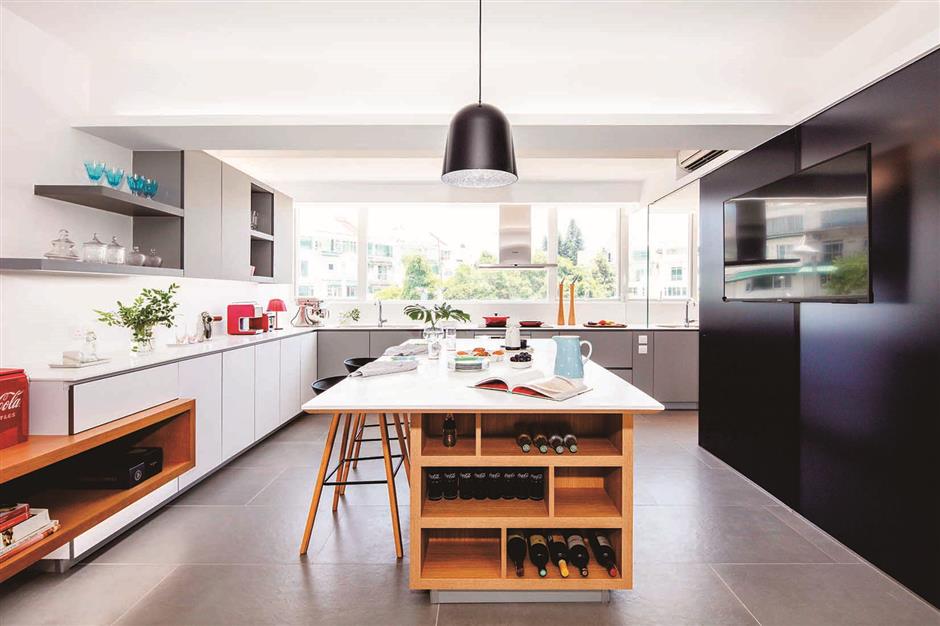 The main kitchen is focused around a large island, fitted out with a breakfast bar, wine fridge, drawers, USB sockets and a phone-charging area.

“It was crucial to have a large island and everyone loves it — the family tends to eat and hang out here,” Leung said.

Open to the kitchen is a simple dining room with a skylight and large window. The couple’s suite is spread over two floors. On the fifth floor, the master bedroom has a glass-walled bathroom — with wet room, egg-shaped bath and marble vanity — and a large walk-in dressing room with a fabulous view across Marina Cove.

The most colorful spaces in the house are the girls’ bedrooms. They chose the colors themselves: yellow for Hannah, purple for Sarah.

Hannah chose a cheerful buttery yellow for her bedroom, which is linked to her sister’s room by a narrow corridor in front of the angled floor-to-ceiling windows. In this case the linked spaces allow the girls to visit each other and chat together.

The couple’s last home, in the city, had more wood and Scandinavian influences. This time, they wanted it to be fresh and marine clean, in keeping with the environment. So the designer went for shades of grey and lots of white.

The materials used on the stairs change as they ascend through the house: practical grey tile in the lobby, living room and second-floor kitchen switches to warmer, softer wood for the third-floor family room/guest room, the fourth-floor children’s rooms and fifth-and-sixth-floor master suite and study.

“A minimalist palette serves as a natural base for the homeowners’ distinctive furniture and collections,” Leung said.

“It’s like a gallery home. Make the home improve their lives and an extension of their own characters. And we wanted to make the communal spaces inviting and cozy, like one of those cool but casual bistros that serve great home-cooked food — a place that you’d like to come back.”