Stress relief is a puzzle no longer

As the end of the year draws near, the stress and pressure from both work and preparing for the upcoming holiday season are building up for many people.

There are a number of ways to deal with the pressure, and puzzles, games and toys are convenient options to ease stress. This week, we are taking a look at some trendy puzzles and games that might be very helpful in relieving sudden stress and anxiety. 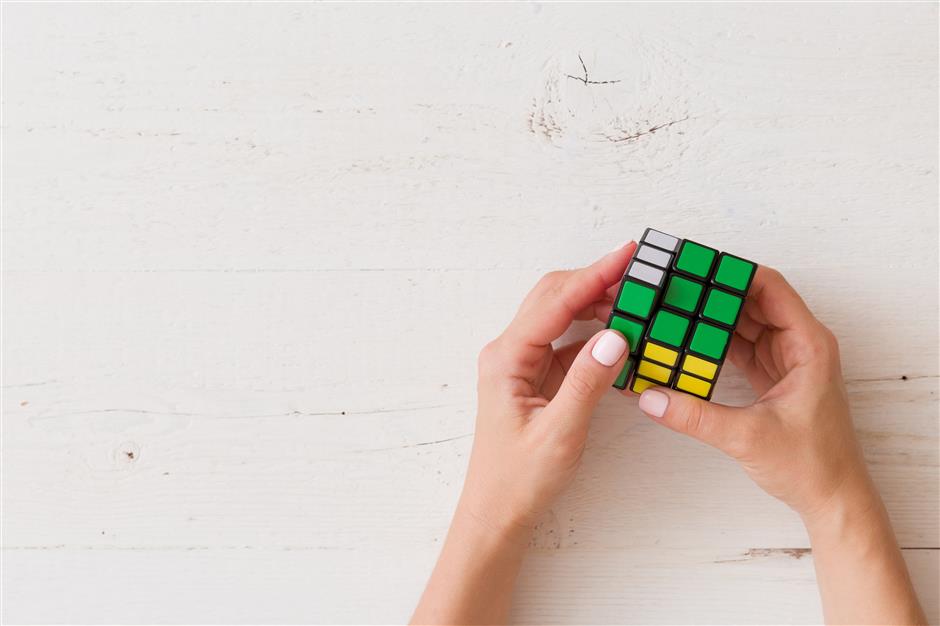 There are a number of toys, games and puzzles that can relieve stress.

Slime, a colorful and gooey substance, is one of the most satisfying stress-relieving toys and one that many people are obsessed with.

Creating slime is simple: It’s a combination of borax powder and white glue. Additional ingredients such as food colorings and glitter are added to customize the basic slime.

Simple and effective, slime presents a unique kind of satisfaction when it’s kneaded, poked, squeezed, stretched or rolled. These therapeutic processes release tension in the hand and wrist muscles and the sounds it makes are also very soothing.

Slime also reminds people of playing with products such as plasticine and clay, which can lead to the obsession. 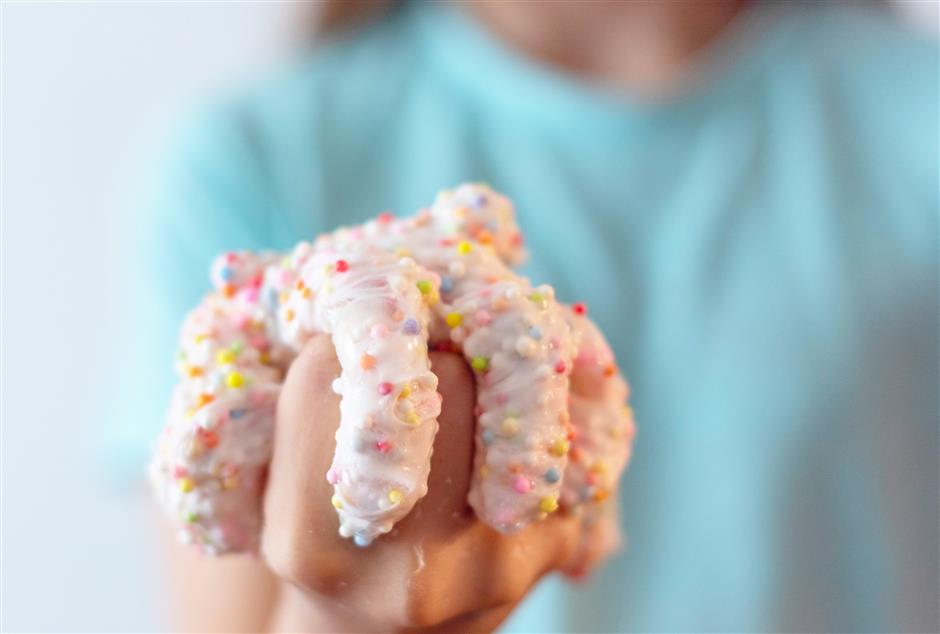 Playing with slime is a therapeutic process.

Besides colors, different types of slimes are available — crunchy slime that creates satisfying sounds, soft butter slime, sparkly glitter slime that’s especially popular for children, glow-in-the-dark slime and even cleaning slime that can remove the dirt from computer keyboards and other electronic products.

You can find a wide variety of slime products that are in different colors, textures and scents online at sites such as Taobao.com. You can also make slime at home by following the numerous recipes posted by enthusiasts. Slime is quite safe for most people, but it’s important to remember to keep the slime away from young children who might be tempted to put it in their mouths.

t**2: It’s a stress relief toy, you can do anything to it to create different shapes and it gives off a light fragrance.

慕**云: It’s really fun to play, smells nice and is non-stick, a good game to release pressure in office.

m**0: It’s a little sticky in the beginning but adding boric acid solution makes it feel better. The cracking sound has a healing effect. 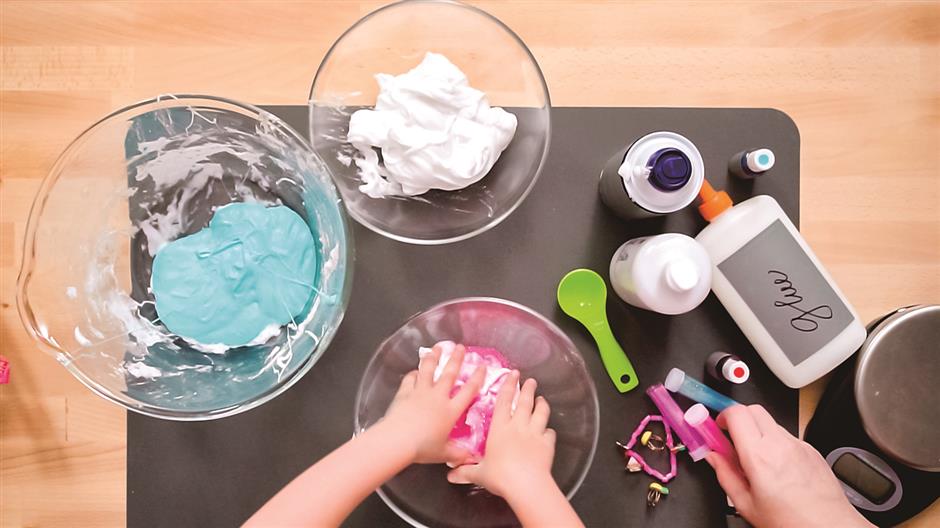 Slime is a popular stress relief toy that comes in different colors.

Jigsaw puzzles became popular over a century ago. It’s an excellent exercise in observation ability and uses both sides of the brain. For many people, playing with a giant jigsaw puzzle can be a great meditation process as you focus on one single image for a long period of time while blocking out other thoughts entering the mind and cutting off distractions.

Traditional jigsaw puzzles are made of wood or cardboard and a puzzle mat may be needed to save your progress. Special attention must be paid to avoid turning the whole thing upside down and being forced to start over.

Plastic jigsaw puzzles can provide a solution to this problem. 3D-JP is a jigsaw puzzle brand that specializes in plastic puzzles where the pieces stay securely together when pieces are in the right place. The pieces feel solid and well-made, and there’s a satisfying clicking sound when pieces are put together. Every piece of the puzzle in the box is unique and it’s not so likely that pieces can be put in the wrong place.

A highlight of 3D-JP jigsaw puzzles is the brand’s collaboration with various artists to create beautiful puzzles, and there are also seasonal specials. Apart from popular cartoon-inspired works like the Japanese manga series “One Piece,” 3D-JP offers a wide range of calming images that would fit nicely in the home décor as well.

The price of jigsaw puzzles varies depending on the number of pieces. You can also customize a plastic jigsaw puzzle by sending the company a high-resolution image, observing the brand’s copyright policy though. Downloaded images are not accepted.

@简直敲可爱吖: I sat on the floor and finished a puzzle, then I looked at the time and a few hours had passed, it really releases the stress.

@茂木榴莲: I thought I could play (with the puzzle) for a month but it’s only day two (finished about a quarter of the set), it’s really good for releasing stress and two hours could pass easily without me noticing. 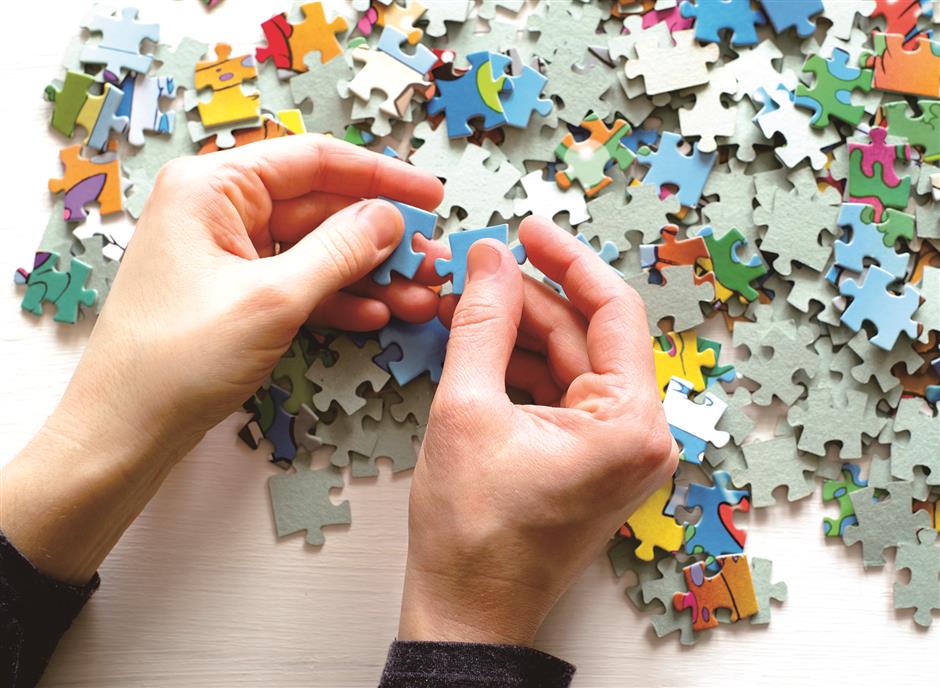 The Rubik’s Cube, a classic brain-training 3-D puzzle, was invented by Erno Rubik in 1974, who himself spent one month learning how to do a Rubik’s Cube.

Rubik’s Cube remains one of the best-selling toys worldwide. The puzzle can release tension and help to divert the attention, hence improving the mood briefly.

Solving a Rubik’s Cube is not news anymore, there are many ways to do it from beginner to advanced levels. To make the old game fun again, there are now many different kinds of similar puzzles.

The Infinity Cube is a pocket-size fidgeting gadget made from aluminum. The cube is easy to travel with and allows the user to play one-handed. It has a nice, smooth finish to add to the experience and flipping and folding the toy creates no noise. The cube provides something else to focus on when you feel stressed or anxious.

The original Infinity Cube created by Bastion Gear after a Kickstarter campaign retails for US$50, and there are many copycats on the market. 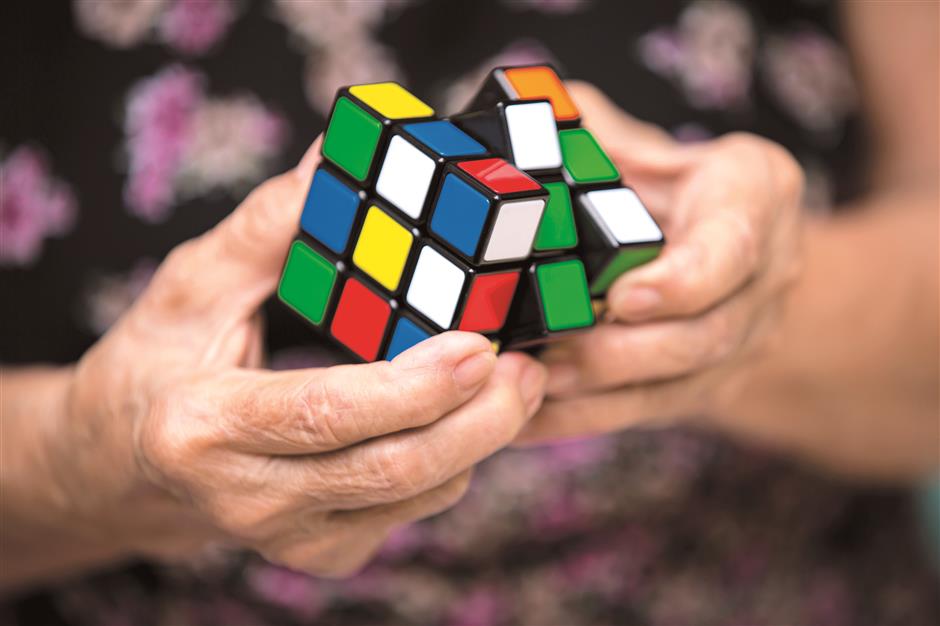 Rubik’s Cube can help to divert the attention.

Toysmith’s Zen Garden is a mini desktop item inspired by the traditional Japanese meditative garden. The game, which retails for around US$25 on Amazon.com, includes a long-handled rake, a bamboo rake and a broom to create meditative patterns in the sand, with two ceramic cranes and assorted polished stones providing visual interest and a counterpoint to the garden’s serene patterns.

The soothing game can cultivate some inner peace for people under pressure, while creating minimum noise and distraction. It makes a great decorative item for the office.

Courtney: This looks great and it is a descent size for my desk. It zaps stress because it is very relaxing. Take a few moments out of your busy day for yourself to just breathe and create patterns in your own little Zen garden. Quiet your mind while reading one of the insightful meditations in the included Book of Meditations.

Nefertiti: Bought for someone with a hectic office schedule. This allows some time to unwind and refocus. It came packaged nicely so it was easy to wrap and gift it. 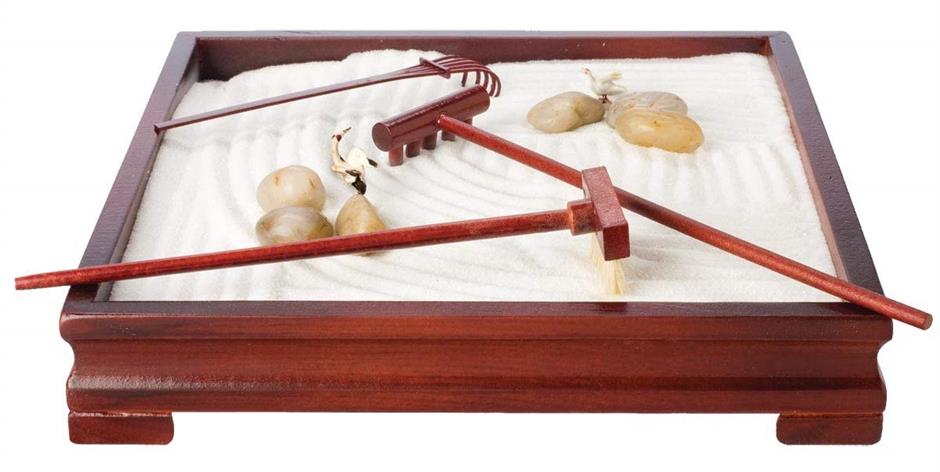 Also known as a Polar Pen, the magnetic pen is a finger fidgeting toy that can be rotated and transformed into a variety of creative shapes. The best thing about the Polar pen is that it can also be used as a gel pen and touchscreen pen, a useful and fun gadget to carry in your pocket when on the go.

Players can develop different ways to reshape the Polar Pen, such as making it a phone holder or using it as a compass.

The pen from the Polar brand is composed of 14 magnetic rings alongside what makes it a pen. You can also purchase more magnets as well as chrome balls to add to the fun.

The Polar Pen is a much safer alternative to magnetic beads and sticks, which come in sets of hundreds of pieces that could be swallowed, but it should also be used with caution and kept away from young children.