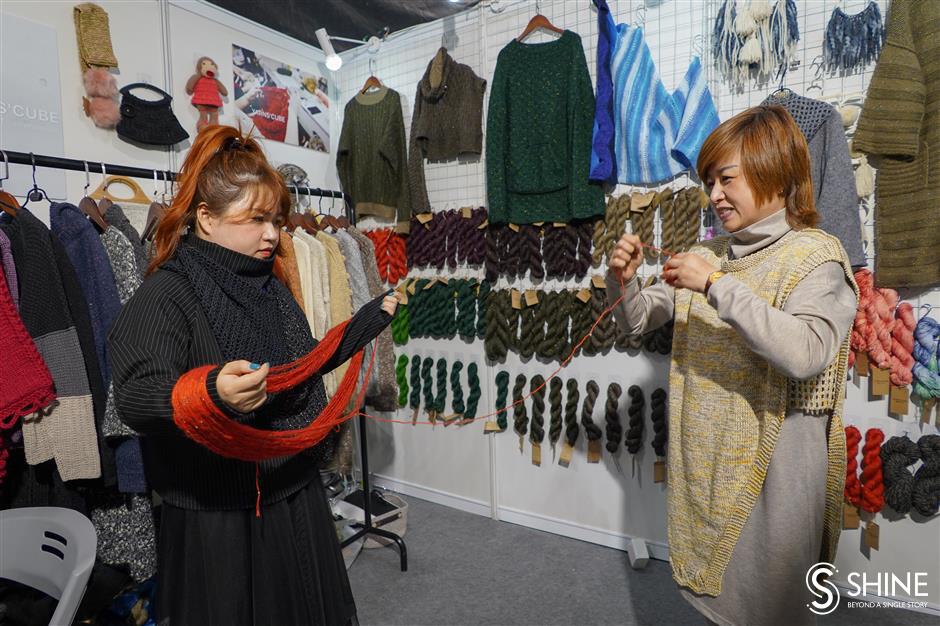 Winter has arrived. If you visit a park or walk through the alley of an old neighborhood, you will likely come across a group of elderly women gathered for needlework and chatting.

The older generation of Shanghai women retain an affinity for knitting and crochet. In the 1930s and 40s, knitting master Feng Qiuping was as much a household name as legendary author Eileen Chang. Almost every Shanghai woman, no matter what her social status, owned Feng’s knitting manual.

In the 1950s and 60s, knitting was often a necessity because clothing items were often scarce on shop shelves. But once prosperity emerged, knitting went out of style for a few decades. Now it is undergoing a revival. And it’s no longer just grannies with needles and yarn in hand. A number of young people have taken up the craft.

One devotee is Chen Jiaxuan, 29. She and her mother Jin Lu opened a knitting studio called Yarn’s Cube in 2017.

I visited them on a recent chilly, wet evening. Entering their studio, which is located in an old house on Nanchang Road in Huangpu District, I was immediately warmed by the inviting atmosphere, skeins of colorful yarn stuffed in cabinets and stylish hand-knit garments hanging on the wall.

“My mother started knitting when she was pregnant with me,” Chen said. “And she taught me.”

“Chen’s grandmother was also good at knitting, so I think I was destined to become a skilled knitter,” said Jin, as she effortlessly worked the needles in her hands. “I created at least one garment every month during Chen’s childhood.”

Like Jin, many women first get into knitting when they are expecting. Every line of knitting is done with love. 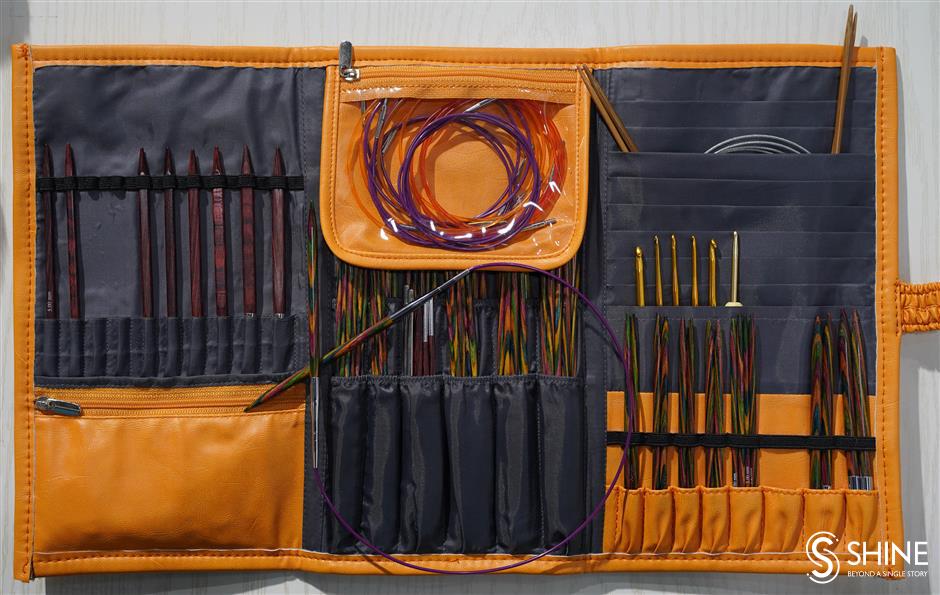 During my visit at the workshop, a pregnant woman due to go into confinement in 10 days was weaving an orange hooded scarf for herself. Before that, she knitted a woolen cloak and a blanket for her soon-to-arrive baby boy. She drove from Kunshan in Jiangsu Province to Chen’s studio to learn knitting.

“I wanted to make something for my baby so I started knitting,” said the mother-to-be, who is surnamed Lu. “Compared with ready-to-wear baby clothes, hand-knitted garments are much warmer.”

Lu said she felt her baby kicking while she was knitting the cloak for him. The naughty boy probably was expressing his excitement at the new clothing, she said.

Apart from mothers-to-be, another group of knitters are lovers making gifts for their beloved. They include men born after 1995.

“I was deeply impressed by a young man who spent three whole days making a knitted bag for his girlfriend,” said Chen. “The bag was very complicated, which resulted in calluses on his hands.”

While Chen was interacting with crochet lovers, her mother was attending to mostly middle-aged housewives. For them, knitting is more than something to keep their hands busy and their minds occupied. It’s a social outing.

“Knitting is a great way to relieve depression,” said Jin. “Staying home alone, housewives often have no one to talk to. Knitting allows them to find companions who enjoy doing the same thing.” 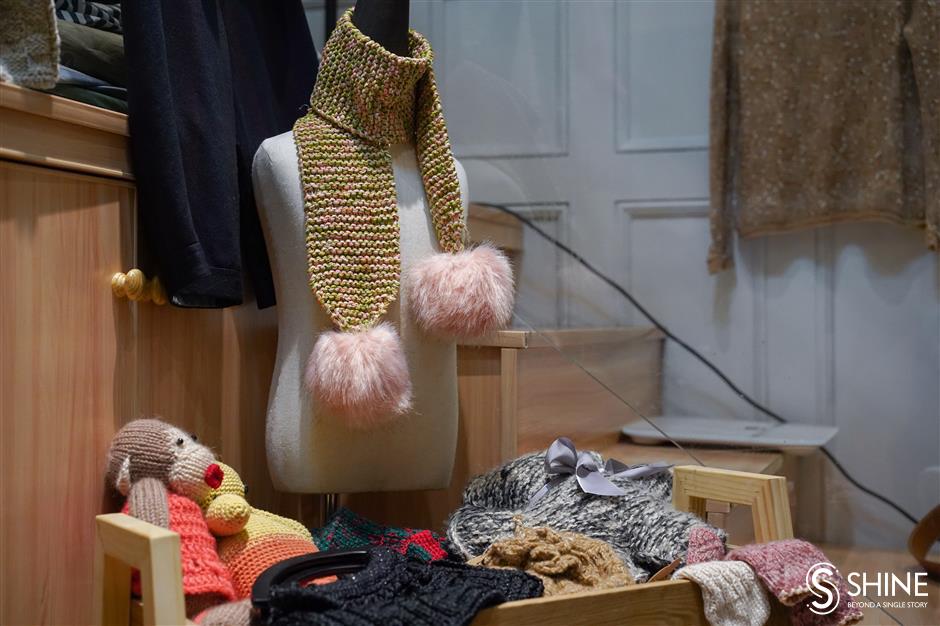 A stylish woolen scarf designed and knitted by Chen

Knitting is so convenient. It can be done anywhere, anytime. Once a person falls in love with the hobby, it’s hard to put the needles down.

“I like crocheting while watching TV,” said Chen. “However, I often focus so hard on knitting that I lose the plot on a show I am watching.”

Influenced by her mother, the lively and outgoing woman started learning knitting when she was a middle-school student. After graduating from university, she worked on the administrative staff of a company. However, she found the nine-to-five job boring, so she quit.

“I don’t like being restrained,” said Chen. “I decided to turn my hobby into my career.”

Before the launch of their knitting workshop in Shanghai, Jin opened her own knitting store in her hometown of Changzhou in Jiangsu Province. The shop was quite well-known locally.

“Since we are family members, we can speak forthrightly and express our thoughts, which makes things much easier” said Chen.

Chen has dyed most of the skeins of yarn herself in the workshop, using natural pigments extracted from various plants. For example, blue dye comes from isatis root, logwood produces red, and Chinese gall yields gray.

Mother and daughter are both charitable in their outlook. They have donated woolen sweaters to poverty-stricken areas of China and have taught people with disabilities how to knit and possibly support themselves. 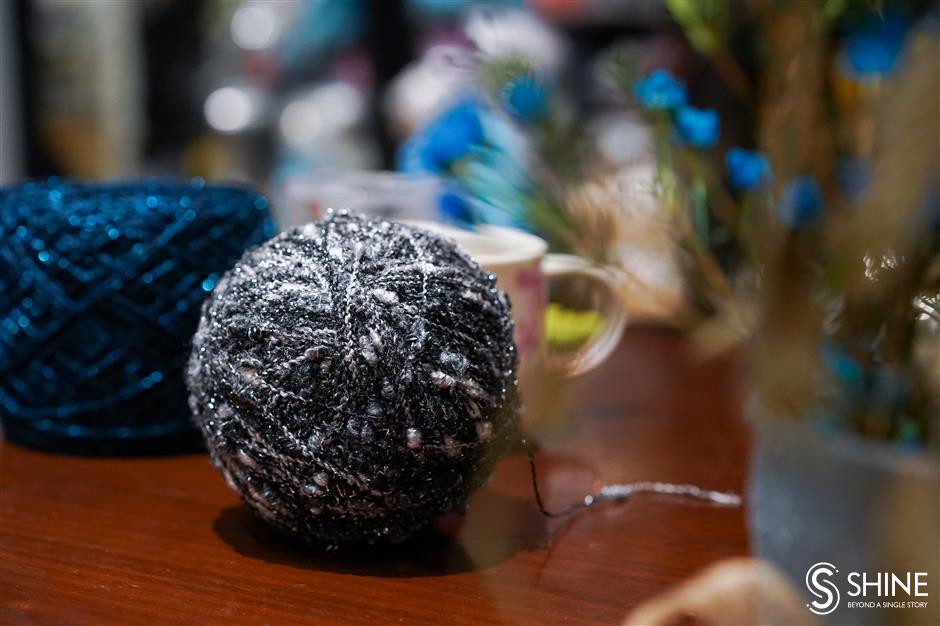 Fluffy yarn is a comfort as winter arrives.

Chen is happy to give tips on knitting. Here are a few of them:

• Knitting is not only a winter pastime.Apart from woolen yarns, there are cotton and silk threads that can be used to knit spring and summer clothing,and also ornaments and toys.