Every Shanghai film lover knows that grabbing tickets to the annual Shanghai International Film Festival is tough enough in the best of times, let alone considering the heavy restrictions on ticket sales under COVID-19.

Tickets went on sale last week and unsurprisingly — with cinemas only allowed to sell 30% of seats to ensure safe social distancing — sold out in just ten minutes. I didn’t get my hands on a single one, and I bet you didn’t either.

That’s why I was quite excited to hear that the folks at the film festival were working with local government to help those who missed out to get their cinema fix: a two-week long, citywide outdoor film festival featuring highly acclaimed local films.

The makeshift cinemas, set up outside seven of the Shanghai’s famous shopping centers, seat around 100 people, and tickets are free of charge. Films from the festival’s back-catalogue will screen nightly for the 14 days, typically starting at 7pm, just minutes after sunset.

This week I headed to the Global Harbor Mall in Putuo district to check out Summer in West Creek, a 2017 feature set in Shanghai about a 10-year-old boy who dreams of making it big in the World Cup, despite a lack of support from his parents. The film went on to win the audience choice award at the prestigious Korean Busan Film Festival, among other accolades.

I made sure to arrive early since seats, while allocated, aren’t numbered — you need to get in early to get a good spot. Tickets for the Putuo screenings are available on the district’s official WeChat, but other areas have different booking methods and some are just first in, first served.

One young boy who happened to be walking by with his grandmother was pretty excited about the idea of watching a movie in an outdoor cinema, but was a bit disappointed when staff on site told him all the tickets had been snapped up. “You can wait, though,” the young lady on the desk said. “There’s usually people who don’t show up, and then we can let you in.” 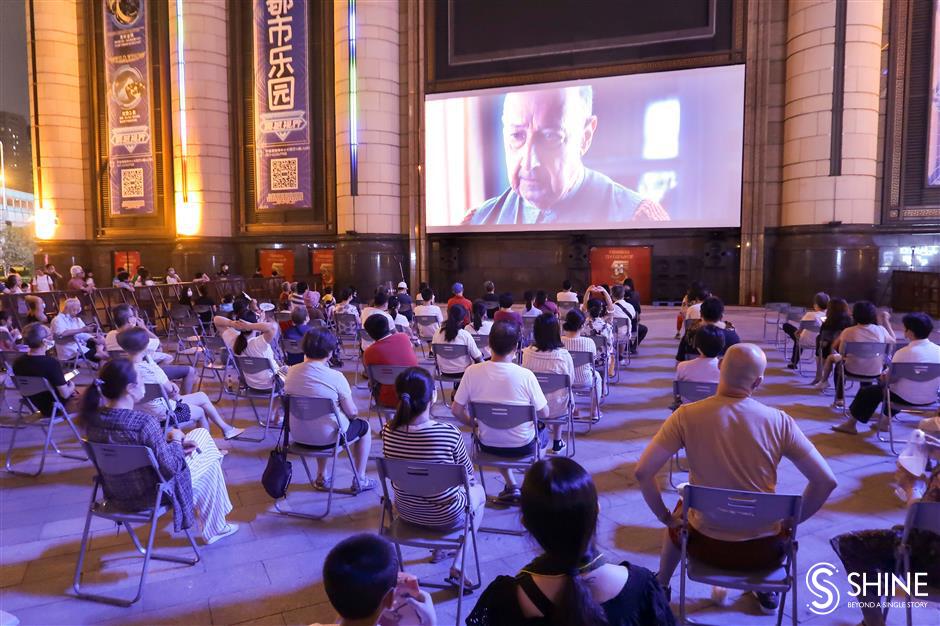 The outdoor film festival, organized in association with the Shanghai International Film Festival.

He eagerly marched to the opposite side where he was told the line would be.

Of course, there’s all the usual safety measures, including temperature checks and health QR codes, and patrons need to wear face masks for the entire movie. The 100 seats are all spaced a meter apart to ensure a safe distance from others.

When the sun finally set and the screen lit up, I noticed about 70 percent of the seats were still empty. There were huge crowds gathered around the gates of the makeshift cinema watching from there, and lining to get in.

At 7:30pm on the dot, those in line without free tickets from WeChat can get in after the usual health checks. That young boy was first in line, and his grandmother waved him off to go and do a spot of peaceful shopping during the movie. “I’ll be right here when it ends,” she yelled out as he ran to get the seat he had his eye on for the past half hour. I doubt he heard her.

To be completely honest, I’m not sure outdoor movies are my thing, even though I’ve always wanted to experience one. There’s way too much noise and outside light for my liking, but it as still nice to be able to check that off my list.

The movie was pretty good, but I think I’ll definitely have to find a way to check it out again in a more controlled environment.

The outdoor film festival, organized in association with the Shanghai International Film Festival, runs for another week.

Check out Andy’s vlog on his outdoor cinema experience.