The couple, in their 60s, purchased the 205-square-meter apartment in 1996, making only a few minor renovations.

“At that time, we were working in Hong Kong and wanted a place close to, but not in the Central or Mid-Levels districts,” said John, originally from the United States, while his wife Iris is from Hong Kong. The unit in La Clare Mansion fit the bill, both in terms of size and price, and with regard to its general ambience. The development consists of two 12-story buildings, with two units per story.

“Unlike many Hong Kong apartments, this layout is simple, efficient and has a wonderful view, largely unimpeded by other structures. It has a refreshing airflow from the mountain behind it and an open space in front.” 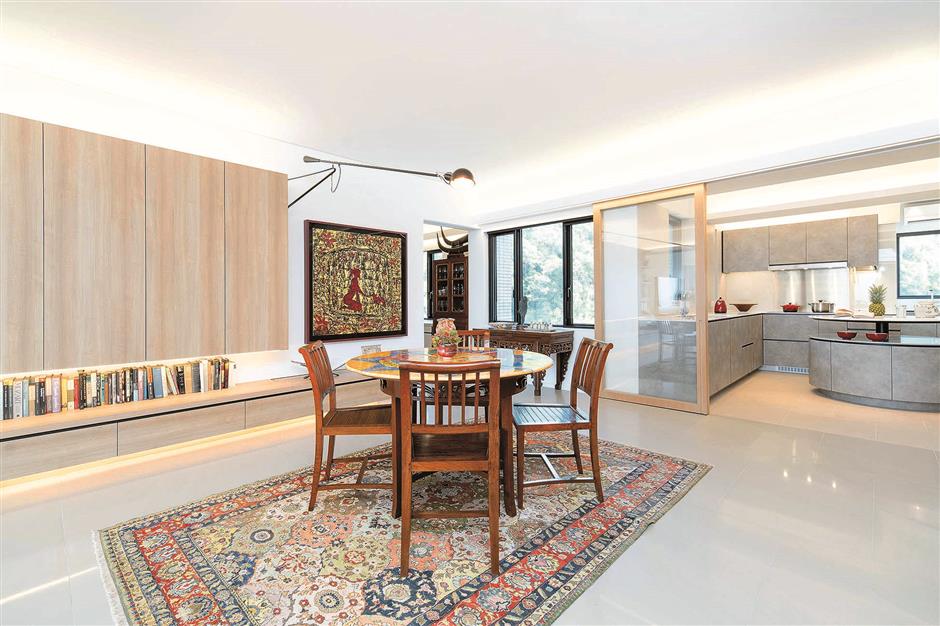 The dining room opens to the kitchen with the island in the center facilitating food preparation and snacking.

“For this reason, we decided to completely overhaul the unit and sought an interior designer with an original vision,” John said. “We were looking for a modern and simple feel in the interior of the renovated apartment.”

The couple interviewed several designers, since this was a rather large project. But Clifton Leung, who developed a thorough understanding of what they were looking for, impressed them and his concept surpassed their expectations.

“He demonstrated great creativity in suggesting ways to maximize the use of space while giving the unit a more intimate feel. For instance, his idea to make the living room smaller by creating additional storage space actually improved the feel of the room by making it more intimate,” John said.

The couple gave only a general guidance — a minimalist feel and an environment, which would enable them to install their decorations and a huge collection of carpets and collectables.

It took Leung eight months to finish the project. Understanding a client’s needs and habits in detail is a priority to create a “wow” layout that’s totally different from the previous one. Leung asked the couple to show him every piece of collectible so he knew how to incorporate them into the design. 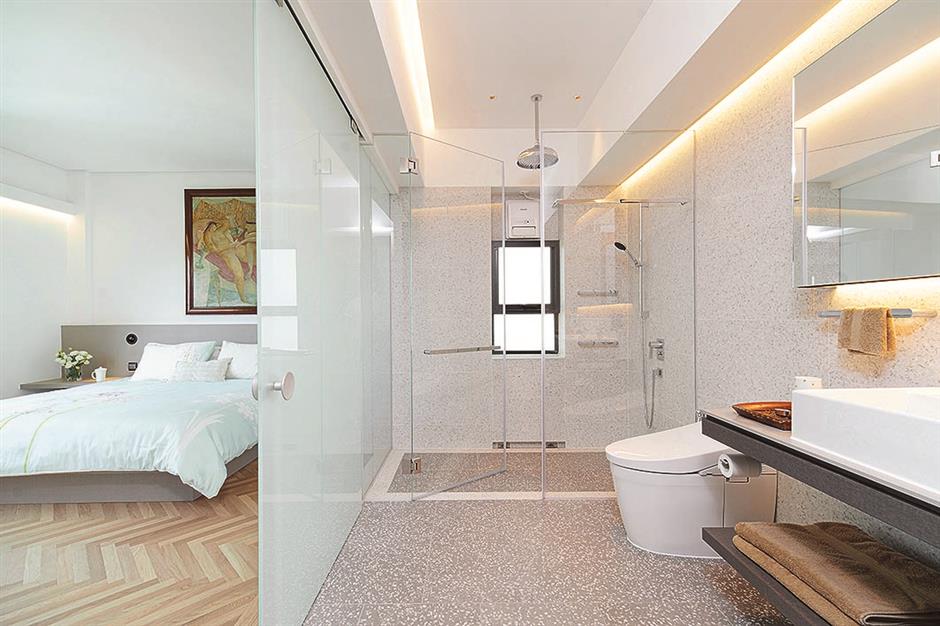 The bathroom takes on a muted grey color palette, creating a minimalist space for the couple to relax.

La Clare Mansion is a 30–year-old building in Pokfulam, where the apartment is built in a traditional “Hong Kong-style layout” — with a long, dark corridor and rooms on both sides. Despite the unsatisfactory existing conditions of the space, Leung saw the potential in its flexibility for a re-layout, as it didn’t have many structural walls. Everything was gutted except for the four walls of the house. He also re-built and upgraded the apartment. For example, there was an electricity upgrade for modern use and all the pipes were redone.

It was an extensive renovation.

“The result is a modern, bright and gallery-like design with no redundant corridor space. The new design has changed the use of the apartment in a few layers of function, from storage zone, entertaining zone, private function zone and bedroom/bathroom zone. Each zone is integrated with its own feature color and loaded with antiques and artifacts that unite the gallery-home together,” Leung said.

The homeowners are delighted with the interior flow of the apartment. 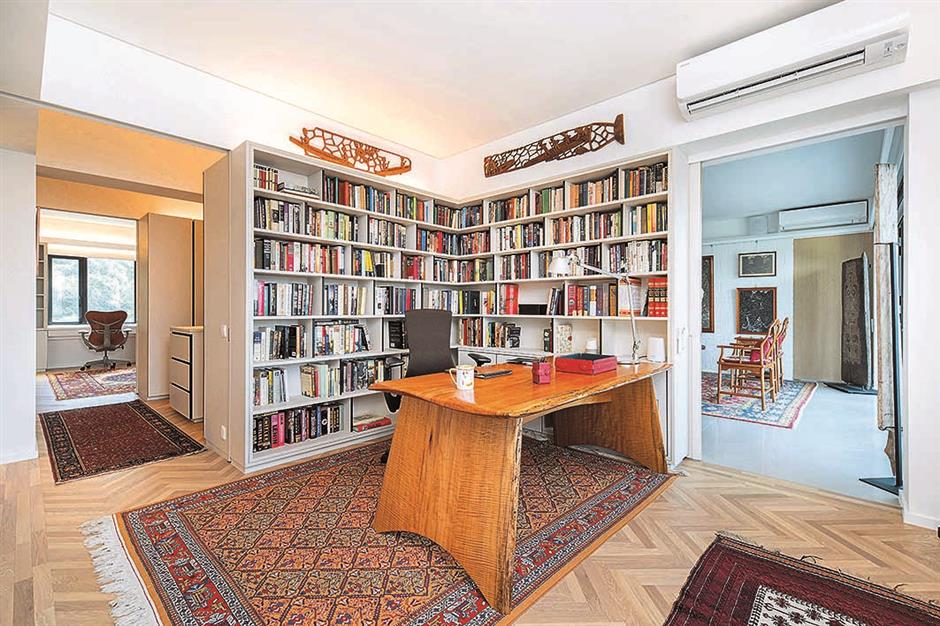 A Marri Timber Desk by JahRoc Galleries is the statement piece against the bold colors of a few Turkish rugs.

“Previously, off the living and dining room, there was a hallway with two rooms on each side. Leung opened up the interior and created more space and a modular feel. The sliding doors enable us to block off sections of the unit as we wish while, at the same time, opening the interior to facilitate easy access,” John said.

The Mughal rug sets the foundation of the living room. It is layered with a natural wood slab table and prized pieces from Indonesia, like the Rumah Adat door from Lamaknen, Belu and artworks from Batuan, Bali. The built-in furniture is topped with a natural wood finish, complimenting the client’s wooden pieces. Likewise, the kitchen is efficiently laid out. The island in the center facilitates food preparation and snacking; and all the devices are arranged in a compact and convenient way. It is designed in a round shape so that’s more welcoming and has a “hospitable” feel.

The white-painted brick wall feature is Leung’s signature design that he likes to use in many of his home projects to create a hip, New York loft feel — a contemporary but simple backdrop for the owners’ collections. 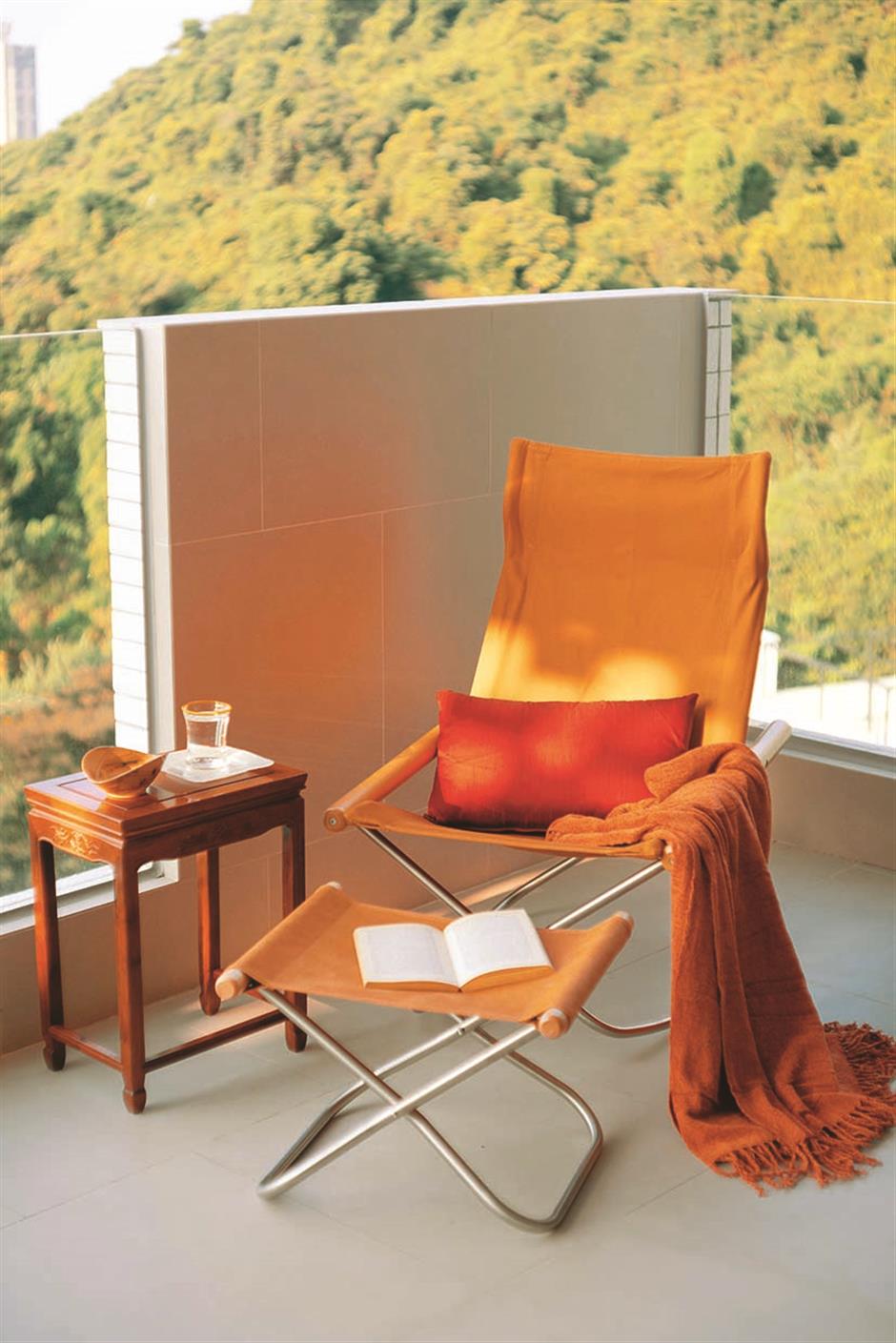 The balcony allows the homeowners to enjoy an unobstructed view of Hong Kong and the hills of Lung Fu Shan without distraction.

“This time, I do it with a little bit touch of difference. Instead of a regular running bond pattern throughout, I did some variations of the patterns — it gives a lively vibe and matches with the style of the collectibles,” Leung said.

One additional highlight for the homeowners is the walk-in closet, which was made possible by Leung’s insight of removing the central hallway and making the flow throughout the unit much more flexible and open.

“We were delighted by Leung’s work for us. His conception was imaginative, original and appealed to our personal aesthetic. Our collaboration was a true partnership. There was no problem they were unable to overcome; no question they were unable to answer; and no challenge they did not take up with gusto. The completed work is very high quality,” John said.

﻿
Special Reports
﻿
61762
,
Minimalist modern HK abode absorbs hip NY loft feel
A Singapore apartment worth waiting for
An unforgettable dining experience in Shanghai
Design with the health of the planet as a priority
Checking out the tailor-made stalls at South Bund Fabric Market
Generation Z Cupid shoots arrows through cyberspace
Fashion brands celebrate Chinese New Year with latest products
For some people, saying 'no' is hard to do. Why is that?
Enjoy traditional culture on Sanlin old street
Safeguard helps children wash hands properly
EXPLORE SHINE