At the first glimmer of dawn, the Bao’en Temple in suburban Fengxian District wakes to the barking of dogs. Zhixiang, head monk of the temple, gets up to check on the dozens of canines housed in the garage.

The dogs are either old or sick. They are strays who would have faced death were it not for the Bao’en Temple Stray Animal Protection Center that Zhixiang founded.

Zhixiang walks through the temple yard toward the garage. He is wearing bright red overalls and a gray beanie, not the usual attire that one might expect of a Buddhist monk. It’s his animal-caring outfit.

An ancient ginkgo tree, now supported by wooden frames, tells us that the temple is at least 400 years old. However, unlike other magnificent ancient Buddhist temples in the city, Bao’en Temple has only one small main hall with no exotic interior décor, a side hall where extra floors have been added to provide dormitories for the monks, an office building, a garage and a small hut beside the ginkgo tree.

The small hut is also full of dogs, yet they are younger and stronger, awaiting adoptive families soon to arrive.

“Actually, my disciples take charge of most of the temple work,” says the 53-year-old Zhixiang. “Almost all my time is devoted to the strays.” 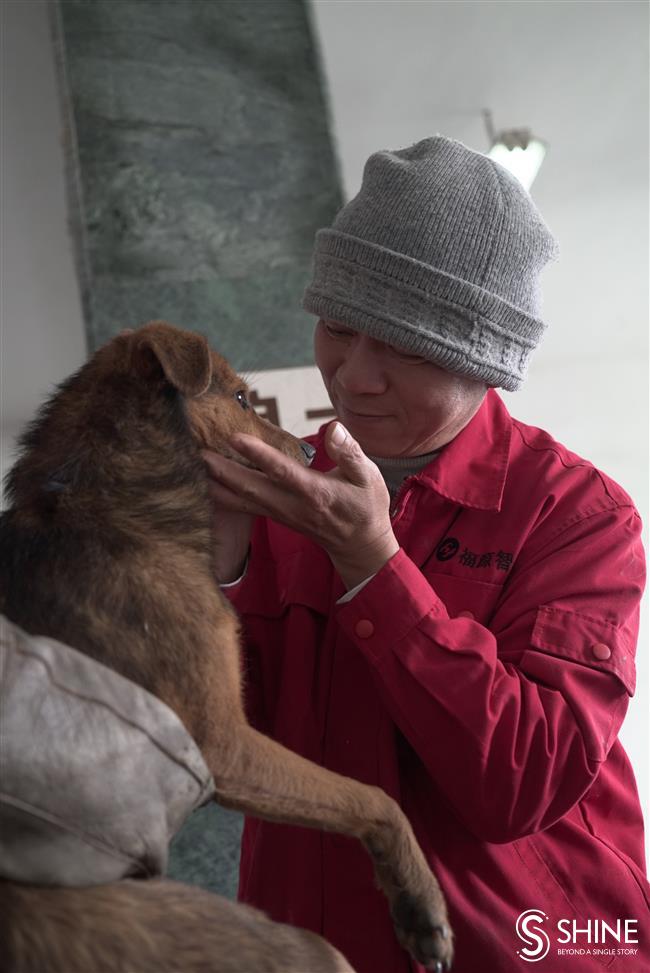 Zhixiang, head monk of Bao’en Temple in Fengxian District, plays with a dog he has rescued.

On his morning round, he carries medicine and breakfast for the dogs into the garage. The interior is rife with canine odors. It’s difficult to keep the air fresh when dozens of dogs live together. Zhixiang says he is used to the smell.

He is not professionally trained as a veterinarian, but after dealing with wounded animals for nearly 27 years, he knows how to treat common diseases.

“I can’t afford sending them to vets; I don’t use temple money for the animals,” he says. “There is a saying in Chinese: ‘Long-term illness makes the patient a doctor.’ After treating so many dogs and cats, I know how to dispense medicine and give injections.”

At 9am, Zhixiang boards a big truck, with empty cages loaded on the back. Another rescue is about to take place at a site about 20 minutes’ ride from the temple. It’s a place where people send strays from time to time.

At the site, Zhixiang sees more than 50 dogs squeezed into six large cages. There is a cardboard box placed on top of one of the cages. Weak squeals come from inside. The volunteers open the box and find four puppies no more than a day old. They are curled up together for warmth.

“Very irresponsible!” Zhixiang says with a sigh. “The mother’s owner probably just discarded the unwanted pups. Things like this often happen. I don’t know if the puppies will survive. They’re very small and weak, and it’s too cold.”

The rescue begins. The volunteers removed dogs from cages one by one. Zhixiang gives them vaccinations for diseases such as canine distemper and administers a bug repellent. The dogs are placed in different cages according to size and gender.

Some dogs are pregnant; some are disabled. One is blind in the left eye; another is missing a front paw. Many look weak. One is later found to have a belly tumor. 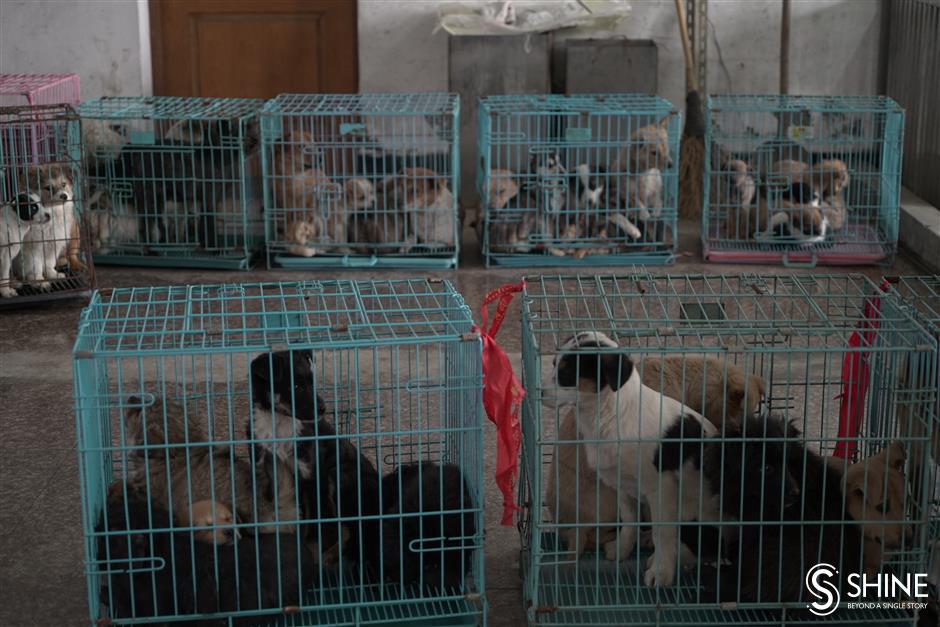 The rescued dogs are put in cages according to their gender and size, waiting to be sent to a shelter Zhixiang and his volunteers rent in Pudong.

After being taken back to the temple, the most severely ill dogs are sent to vets. Others go to a shelter for strays in the Pudong New Area that was rented as an auxiliary facility.

“Our volunteers look for adoptive families to give the dogs a loving home,” Zhixiang says. “Many of the adopted ones go to families abroad. Those not adopted out are cared for by volunteers at the shelter until they die.”

The Pudong shelter now houses more than 6,000 dogs and is expected to reach its capacity of 8,000 before too long.

The shelter has been accepting public donations since 2017.

“Donations cover about half of our expenses. The rest we borrow,” says Zhixiang. “We manage, but to be honest, it’s quite difficult. We really need a new, bigger shelter.”

During the morning rescue operation, a man enters the site and asks if he could have a dog as a watchdog for his factory. Zhixiang refuses.

“The man has a record of not treating dogs well,” he explains. “If I give him one, the dog won’t have a good life.”

Zhixiang has a lot of to say about irresponsible pet owners and people who feed strays.

“When you feed stray cats in your neighborhood but don’t take them for neutering first, then the number of the cats will soon exceed what the neighborhood can bear,” he says. “Then other people complain and want the cats sent away for euthanasia. You do more bad than good in feeding stray cats. The road to hell is always paved with good intentions.” 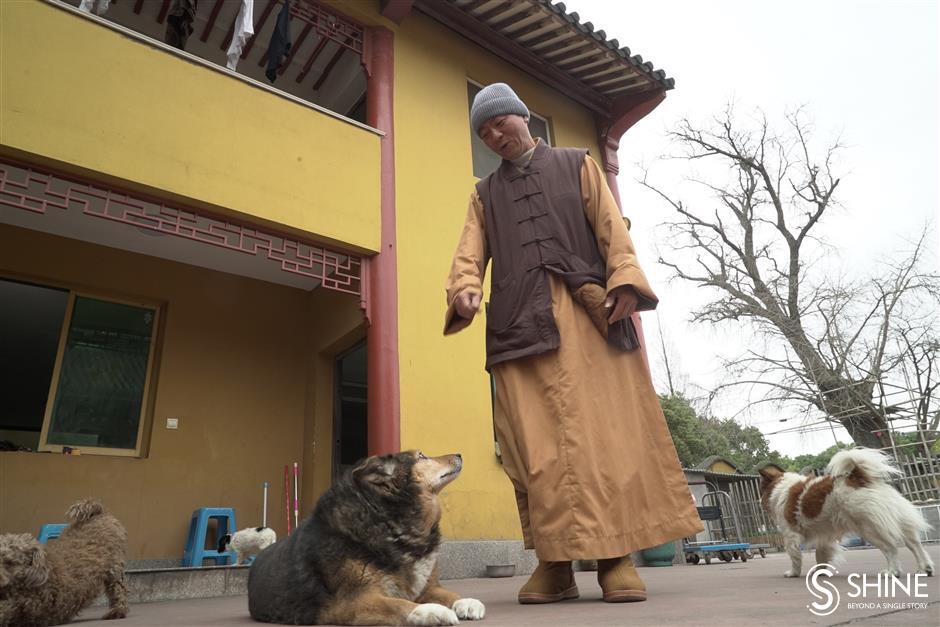 Zhixiang with the dogs he has rescued from life on the streets at the temple. He has been devoting almost all his time and energy to animal welfare for years.

As a Buddhist, Zhixiang said he has great respect for all life. He came to Shanghai from the neighboring Zhejiang Province in 1987 to study at the Buddhist Academy and became a monk after he graduated. He first served at the Jade Buddha Temple in 1993 and then became the head monk of Bao’en Temple in 2006.

After that, Zhixiang started to pay attention to strays on road, carrying bags to pick up the dead and taking them for burial. Saving cats proved “very costly” because most of the rescued cats were injured and had to be sent to vets.

After moving to Bao’en Temple, he began focusing his efforts more on stray dogs than cats. He has seen many of them saved from death and many more that haven’t survived.

On New Year’s Eve, he rescued three newborn puppies that were “frozen like ice.” He warmed them up and gave them artificial respiration, but only one survived.

“Sometimes people who come to worship at the temple don’t understand why I do this,” he says. “Maybe they think that monks should sit in a temple all day chanting scriptures. But Buddha tells us to save lives and that all lives are equal.”

Then there are those people who tell him that stray animals have karma and should be left to their fates.

“But how can I stop?” Zhixiang asks. “Letting them be does not mean watching them die without lifting a finger. I try my best. It is then their fate if they survive or not. That’s what ‘letting them be’ means to me.”

The fate of four newborn puppies rescued during the morning operation is still unclear. After returning to the temple, Zhixiang puts them in a plastic cargo container, with electric blankets below them and another blanket covering the container. For the next few days, he and other staff in the temple will feed them every two to three hours until they gain strength.

Maybe very soon they will join Maomao and Jinzhu, two dogs Zhixiang rescued and has kept with him, enjoying a peaceful life in the yard of Bao’en Temple.

“I think I will do the rescue work until I am 65 years old,” Zhixiang says. “I think that by then, I’ll be too old to carry around cages with dogs. I wish I could find someone reliable to continue the work before my retirement.” 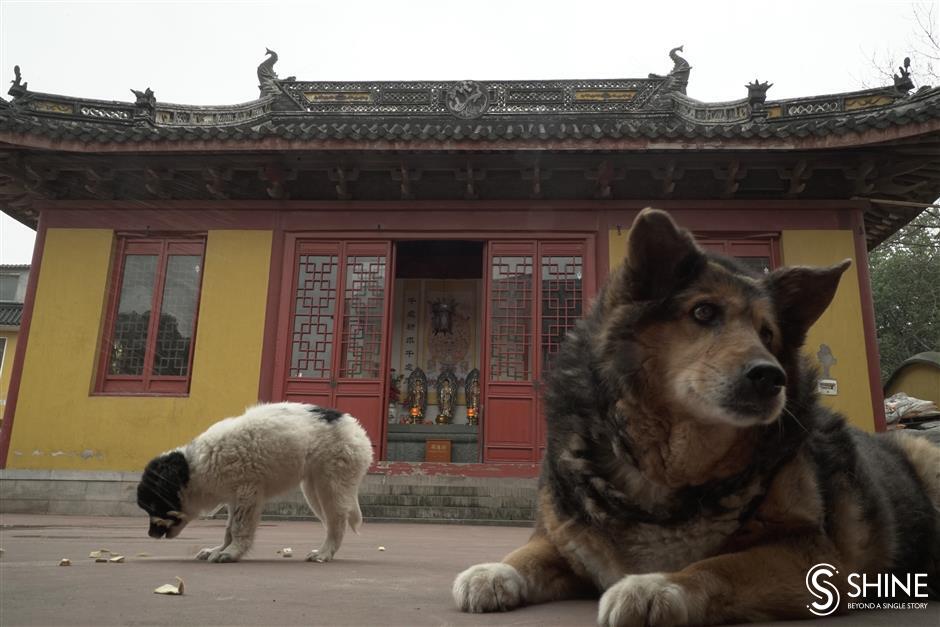 Jinzhu, a dog Zhixiang rescued, has been living on the temple grounds for 14 years.