Deemed “the land of fish and rice,” Chongming Island harbors rich biodiversity and is blessed with dark alluvial soil perfect for farming. Authentic culinary skills with specific Chongming ingredients create the best experience on the island as a bonus to the city’s rural lifestyle. 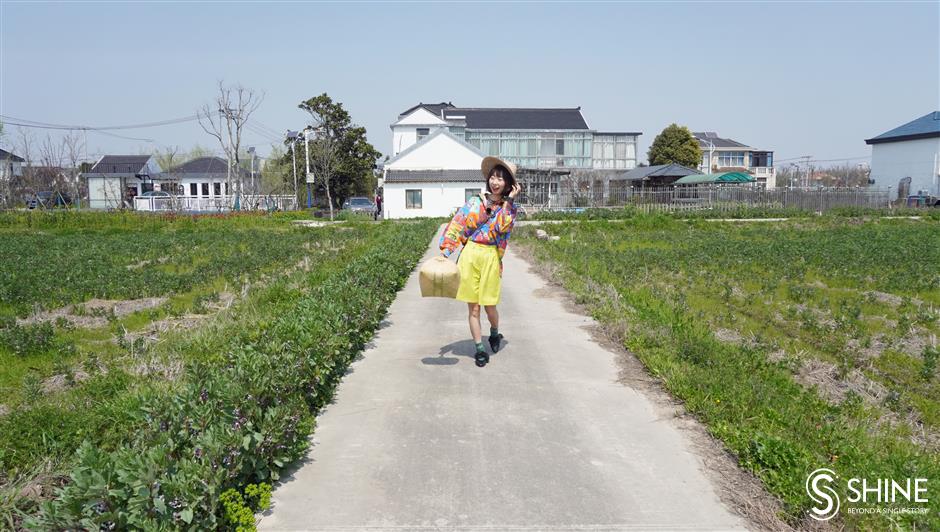 Fiona Li walks through a path in a crop field.

Initiated by two brothers, Gu Hongbin and Gu Hongyu, 37 families in the village have joined Gubobo’s Guesthouse with 192 guestrooms and Chongming-specialty workshops for tourists.

Escape from the city by working with the villagers and exploring the traditional artisanal skills of this charming village! 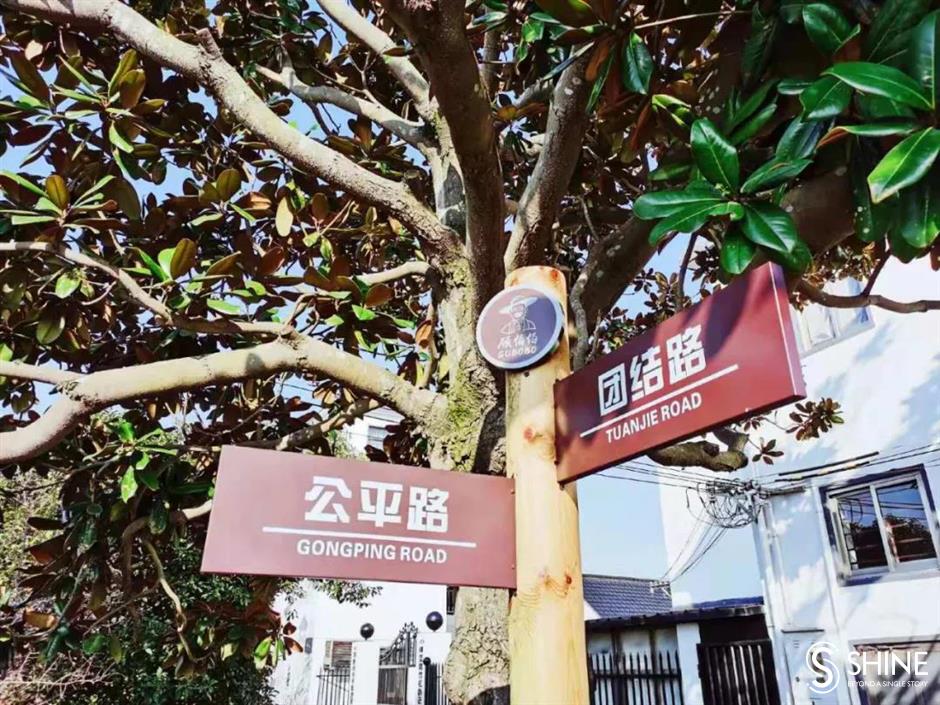 A road sign in Hongqiao Village points to directions of two roads. 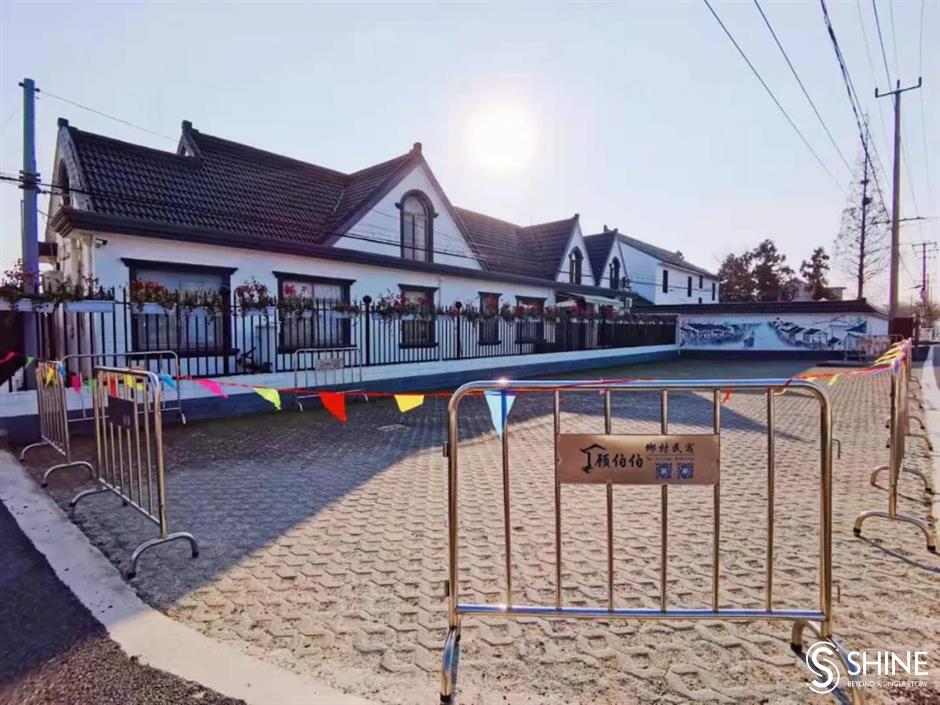 Some minsu houses in Hongqiao Village

Laobaijiu, which literally means “old white wine,” is believed to have been invented 700 years ago in Chongming, about the same time Moutai, a wheat-made liquor, was first made.

The artisanal skills required to make laobaijiu were once something every family on the island cherished and passed on to younger generations.

The custom of making sticky rice wine was abandoned when foreign imports such as red wine became popular in the 1980s.

But in recent years, the old tradition has made a comeback.

Cai Xuefang and Zhang Sen, a retired couple who live in Hongqiao Village and serve as a Gubobo’s minsu host family, have built a private laobaijiu workshop.

With a suitable temperature, spring is the best season for brewing laobaijiu.

“It’s a tradition on the island to brew when the flowers are blooming,” Cai said.

By mixing and brewing locally produced glutinous rice with jiuqu, a special yeast made from Chinese herbs for fermentation, the rice wine features a distinctive sweet taste similar to ice wine but with a much stronger aftertaste like spirits — despite its low alcohol content, usually less than 15 percent.

The couple brew laobaijiu every month.

“When I was young, the glutinous rice was steamed in a large wood-fired oven to make laobaijiu,” Zhang said. “The steaming process usually took more than half a day. We bought the wine-making machine last year, which steams better and brews laobaijiu in only 40 minutes.”

He invited me to experience digging the “glutinous rice mountain” and put it into the huge steamer. The glutinous rice was taken out after it’s well steamed and then spread on a table to mix with jiuqu.

It is the kind of work that relieves tension and anxiety.

The brewing process takes about 20 days. On the seventh day, it becomes sweet fermented glutinous rice. The alcohol content rises to 8-9 percent on the 20th day.

“We try to distill laobaijiu into liquor with the same alcohol content as Maotai,” Zhang said. “It is sweet yet strong, and once people take a sip of it they’re hooked.” 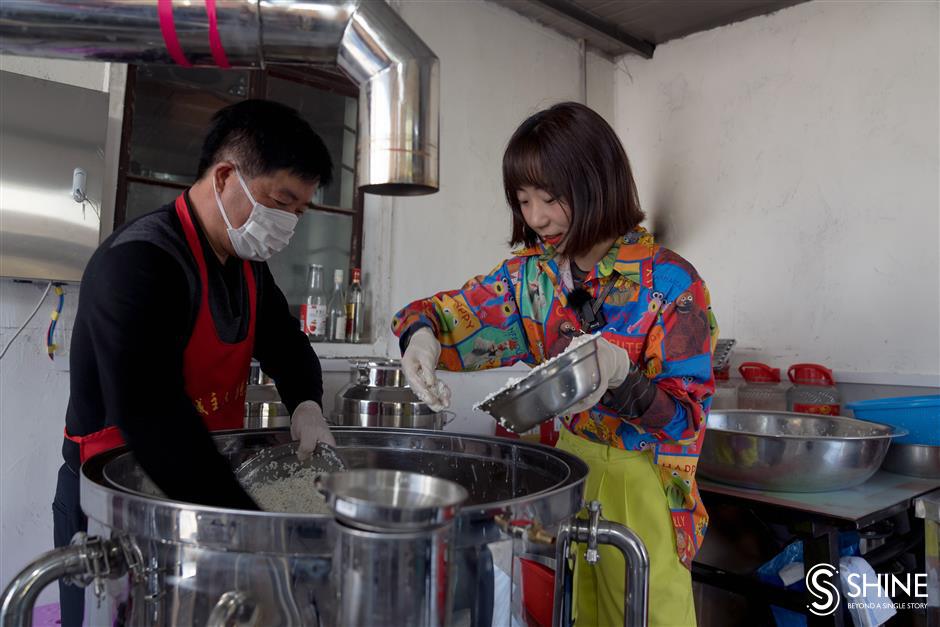 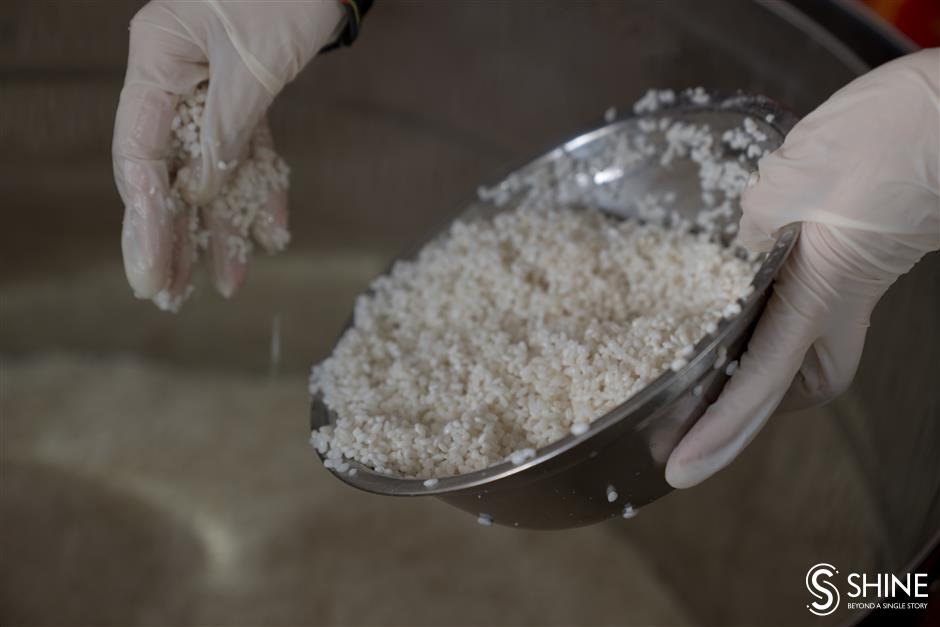 Fiona puts a bowl of well-soaked glutinous rice into a steamer.

It’s a must try for family guests — fresh and chewy with a sweet taste.

According to Zhang, it has been a tradition on the island to make Chongming cake to celebrate Chinese New Year since the Song Dynasty (960–1279).

Making Chongming cake is a kind of “art work.” First, mix the glutinous rice and white rice flour with water, put it in a wooden cake mold and keep it loose. Then mix the rice flour and brown sugar as a filling, and cover it with the mixed rice flour. Then create your art work on the top with dates and nuts.

Wait for three minutes of steaming, and you have your own Chongming cake.

It’s very hot and will dry while cooling, so you must wrap it in plastic film immediately.

It can keep for three days at room temperature, or you can freeze it and steam it again before eating.

“We’ve gotten a lot of orders from our frequent guests through WeChat, and we make it right after it’s ordered and deliver it the same day to keep it fresh,” Zhang said. “All our guests love our cakes.” 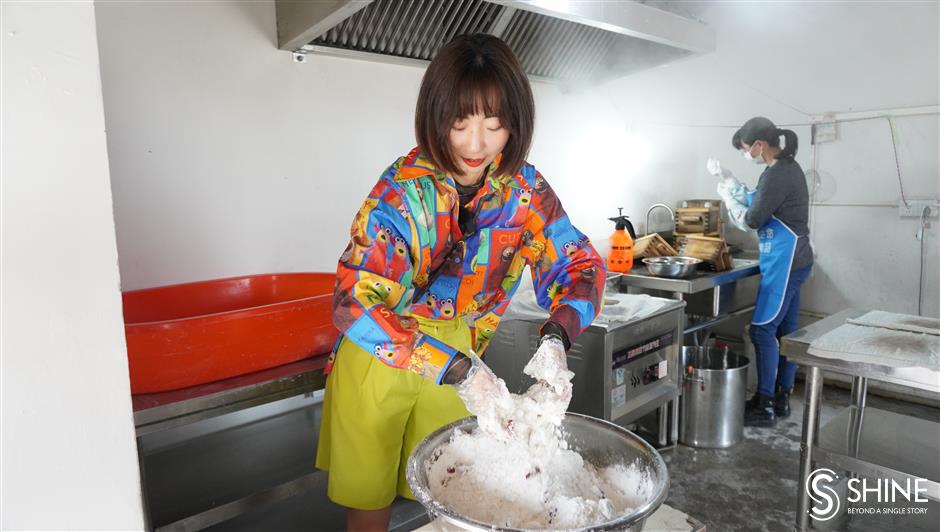 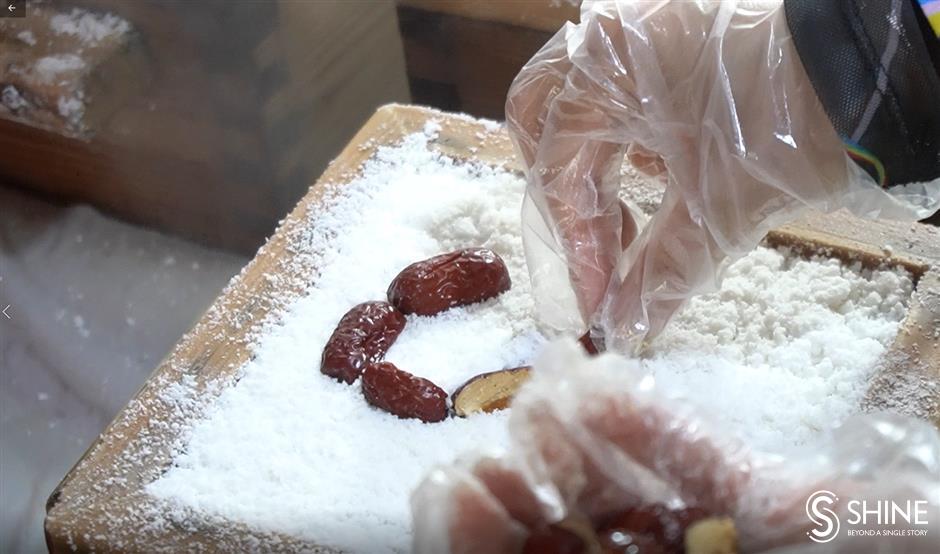 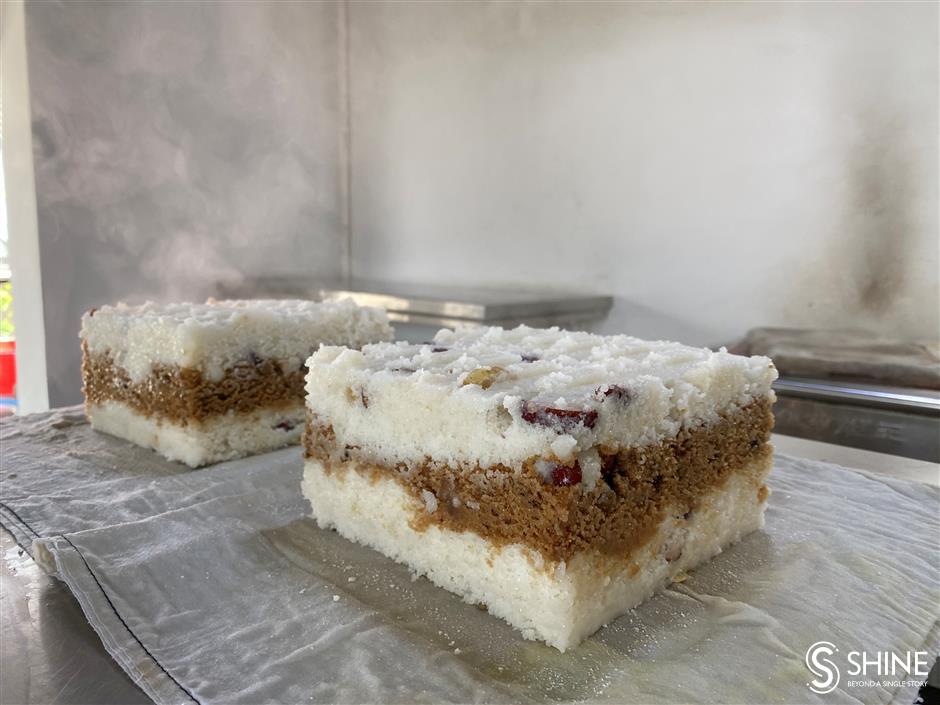 The local food is a special draw. The crops grow in front of every farmhouse. They hop, skip and jump as if trying to knock on the farmers’ doors.

The golden melon is dubbed the “vegetable jellyfish,” primarily because the color is similar after it’s peeled and sliced as an appetizer, but its texture and flavor are closer to cucumbers.

A Chongming Island treasure is baibiandou (white haricot), with a size and texture similar to English beans. It’s usually lightly fried with a spray of spring onions as a vegetable dish, and enjoyed from late summer to early winter by island residents.

During the season, take the caotou (a common clover that grows in the Yangtze River Delta) as a seasonal vegetable. It’s picked in the wild and usually cooked with rice wine to create a unique flavor.

Surrounded by the brackish water at the mouth of China’s most important river, seafood is an important aspect of local cooking. I recommend yushaoyu (literally “fish cooked with fish,” a mix of different varieties of Chongming fish, shrimp and winkles) and miantuoxie (fried Chongming hairy crab coated with flour), which I’ve never seen in urban parts of Shanghai.

What’s more, there’s an organic strawberry garden in the village. It’s fun to pick traceable and healthy produce there. 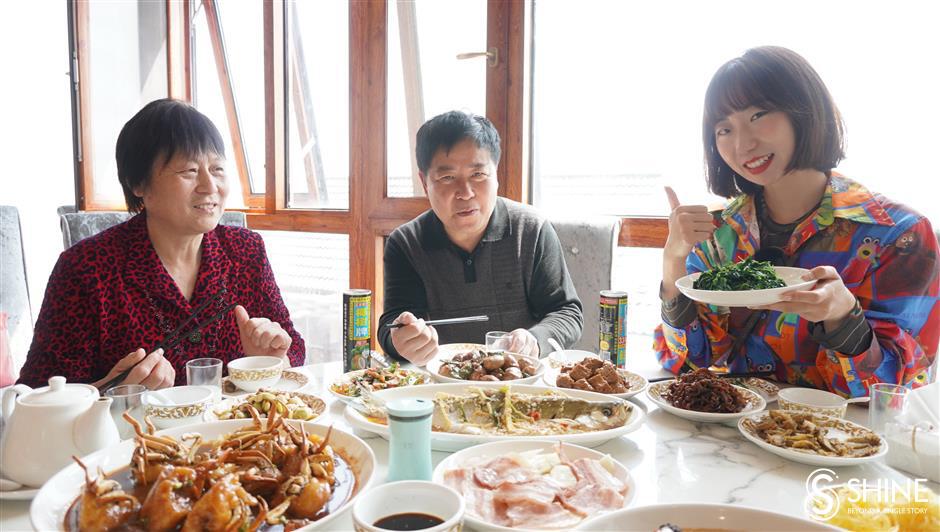 Fiona dines with the locals to taste the authentic Chongming dishes. 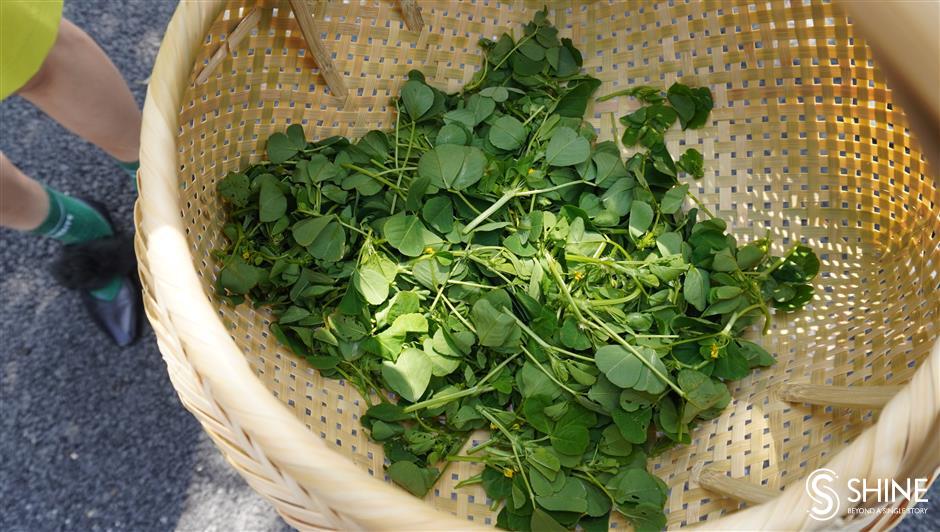 The caotou, a local clover species 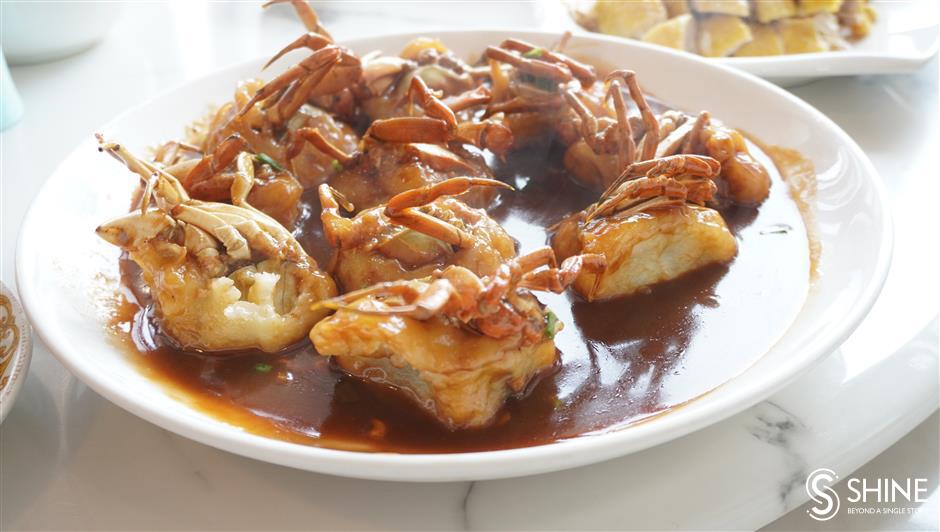 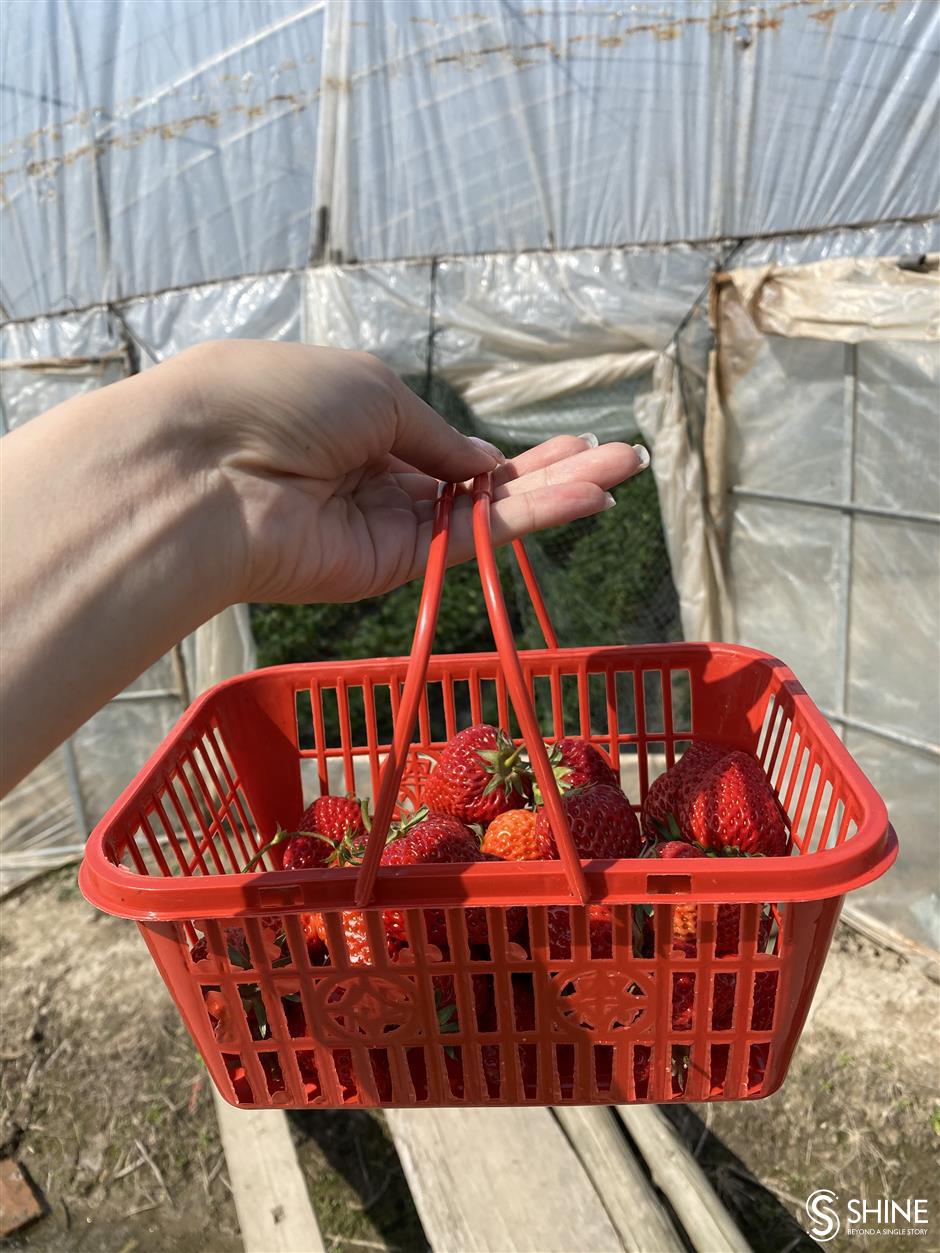 Fiona displays a basket full of organic strawberries she has picked. 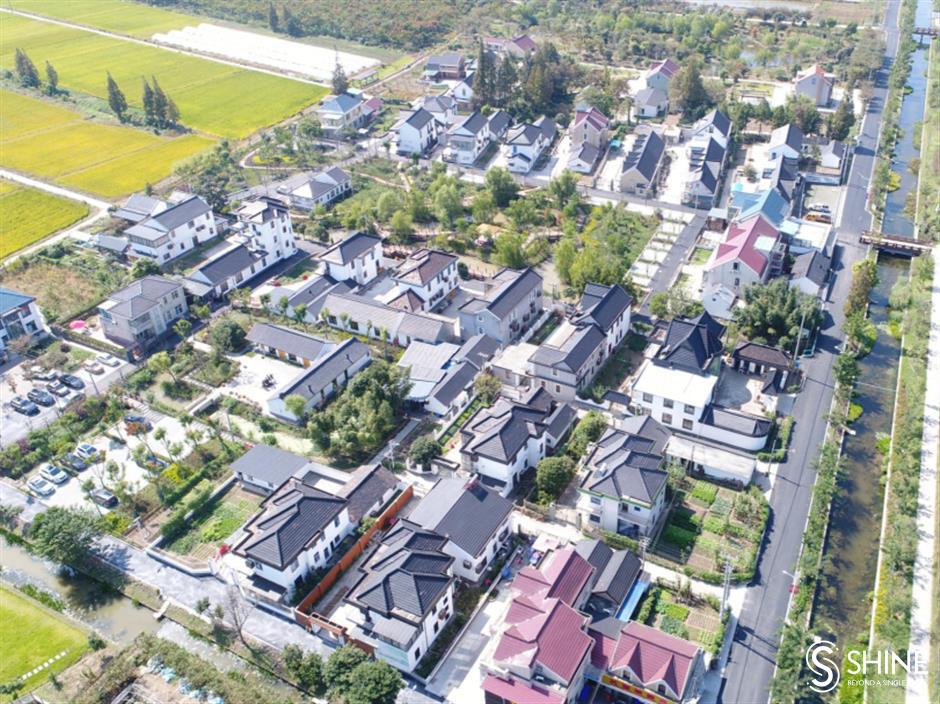 A bird's-eye view of Hongqiao Village