Evening classes for every artistic proclivity, from canvas to kitchen

As the lights start to dim in parts of Shanghai every evening, they come on brightly at the Shanghai Mass Arts Center. People are beginning to converge on the site when I arrive there one Monday evening.

They are white-collar workers, college students, full-time mothers and others who share a common purpose — they want to become more artistic. That may mean learning the art of making dim sum, or growing flowers, or playing an instrument or painting on canvas.

Busy during the day, these people make time at night to attend the non-profit art school.

A semester of 12 lessons costs only 500 yuan (US$77). The school is so popular that about 1,200 slots in the 46 courses of the current term were snapped up online in a mere five minutes in March.

The school serves Xuhui, Jing’an, Changning and Hongkou districts with five campuses. Each has its own specialty. The Jing’an campus, for example, offers a course in coffee-making and floriculture. The Xuhui campus, located in a residential area, teaches belly-dancing and offers a performing arts course for full-time mothers.

I arrive at the main campus of the school at the Mass Arts Center at 6:30pm. Classes don’t start until seven.

Ahead of me as I make my way up to the third floor is a woman carrying an accordion-like instrument on her back. I wonder what it is.

There are seven courses under way this Monday evening, spanning music, dance and cuisine. 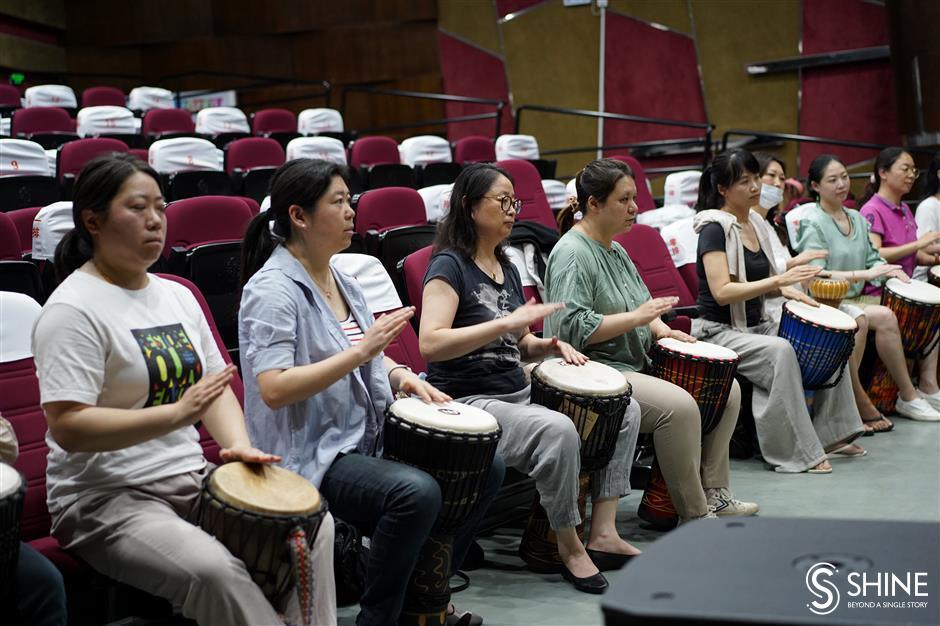 Learning how to play the African hand drum.

My first stop is a fine arts class. The room has tables placed with easels, stretched canvases, water basins and brushes. A projection screen shows one of the oil paintings in Paul Cezanne’s 1904-06 series entitled “Mont Sainte-Victoire.” Students will be painting it in the next two classes.

“The course is mainly intended for students without backgrounds in the fine arts,” says Xu Yangyang, 29, teacher of the class. “Before teaching how to paint, I show them a film about paintings, artists and painting styles.”

A graduate of the University of California in Los Angeles and China’s Central Academy of Fine Arts, Xu is the curator of the Basel Contemporary Art Museum in Jing’an District.

“I went to many communities to give talks on fine arts,” she says. “The audiences were mainly elderly people and children. I think artistic skills need to be spread wider, to young people and the middle-aged, who often lead busy lives.”

She adds: “Art doesn’t have to be pretentious. It can be down-to-earth.” 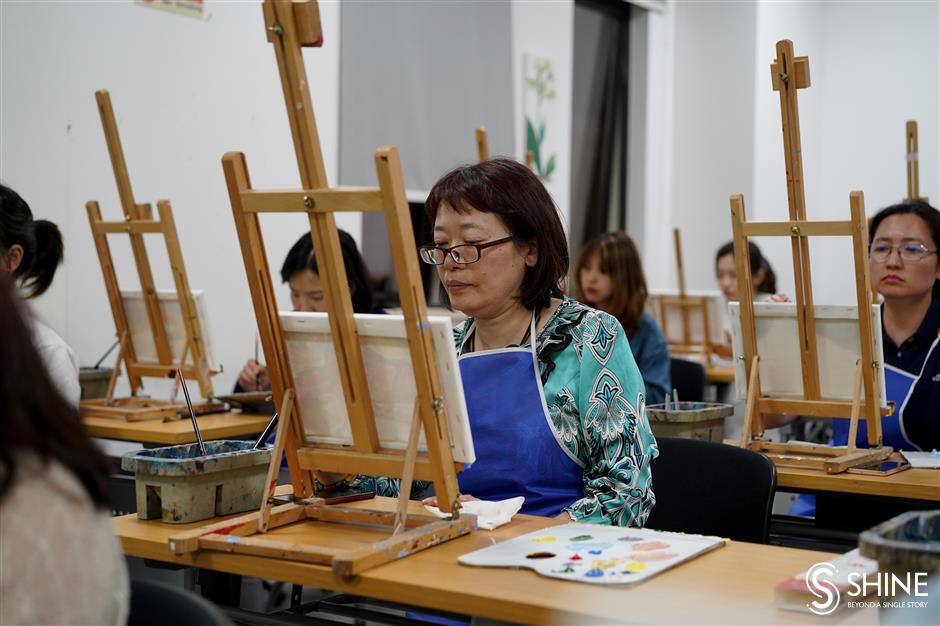 Wang Xiaoya, 52, a researcher for the Shanghai Astronomical Observatory, is the first to arrive for the class. She has walked 25 minutes from her office to the school.

“Attending class is a chance to give myself a break,” says Wang. “I usually cook and do housework when I get off work. But these are my nights out. My family takes care of themselves, and they are proud when I show them my works.”

Wang, who says she learned about the school from a colleague, took courses in guitar and colored-pencil drawings last semester.

Wang practices painting on weekends. She has even created a work to celebrate this year’s 100th anniversary of the founding of the Communist Party of China.

“Maybe I can make a living from painting after my retirement,” Wang says in obvious jest. “Adults should keep improving ourselves. I think people involved in science and engineering need to learn the arts to stimulate their imaginations.” 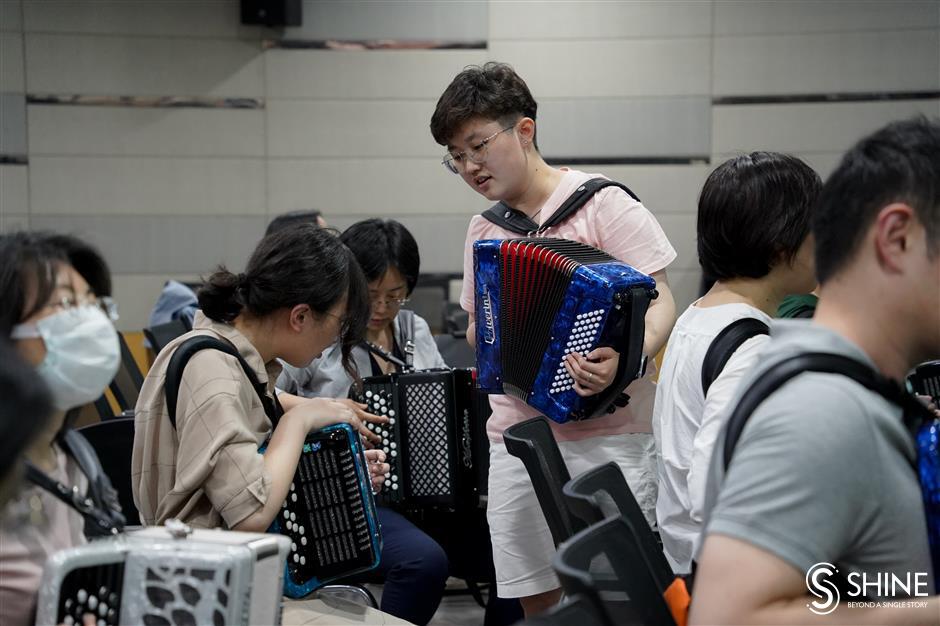 In the music class, a science geek wears a T-shirt imprinted with the characters for “immersed in work and wasting away.”

The 29-year-old man surnamed Guo is an engineer at a state-owned company in the Zhangjiang High-Tech Park in the Pudong New Area. He is an old friend of the night school.

In the past three or four years, he has enrolled in courses to learn the African hand drum and the cucurbit flute, a gourd free-reed instrument of China and parts of Southeast Asia. This time, he is taking a course on the bayan.

Aha! That is the instrument carried by the woman ahead of me! The bayan, I learn, is a type of chromatic-button accordion developed in Russia in the early 20th century.

“Attending night school allows me to transform my life,” says Guo. “I usually work until 10:30pm every day. Attending this school gives me an excuse to leave work early. I feel relaxed to do something that is not related to my job.”

Not sure that he will play the instrument for years to come, Guo rents a bayan, which costs him 200 yuan a month. He says he spends half an hour every night practicing at home.

“For those 30 minutes, I don’t think about anything else but the music,” he explains. “It calms me down.”

Guo says he has noticed that courses at the night art school have become increasingly popular with the public over time. 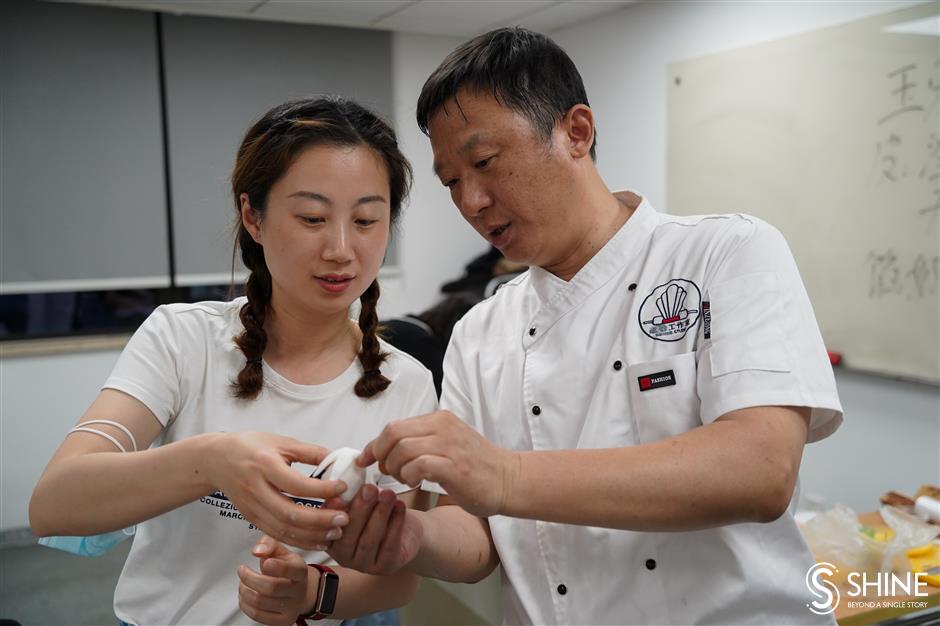 Chef Zhong Jun teaches a mother of two how to make bunny-shaped dumplings.

In a cooking class, a 36-year-old woman surnamed Yin says the round trip to and from the school takes her more than two hours, but every minute in class is worth the effort.

The mother of two, she is learning this evening how to make bunny-shaped dumplings.

“There are many recipes online for Western desserts but few for dim sum,” she says.  “At the last class, we made corn-shaped dumplings, which my children took to school and proudly showed to their friends. It was their love of dim sum that motivated me to take this class.”

Zhong Jun, a chef from a five-star hotel in the city, teaches the cooking class. Under his guidance, students turn out pumpkin-shaped dumplings, glutinous rice balls with shredded coconut, pig-shaped steamed buns, and green-onion and red-bean pancakes. Learning can be so delicious.

Zhong began the cooking class in 2017. Though the tuition fee is low by market standards, it’s the love of cooking that propels him to teach here.

“It makes me very happy to teach others what I am good at and gives me a sense of achievement,” says Zhong. “I love doing community volunteer work. Before this, I was a volunteer at the Shanghai Sixth People’s Hospital for four years.”

The cooking class takes place in a normal classroom. The 52-year-old chef says he would like to see it shifted to a venue with professional kitchen equipment.

His ideas and the long commute times for students like Yin are taken into consideration by school organizers as they plot the future.

According to Yang Lingzhi, director of the school, there will be 10 branch campuses by autumn, and more courses will be provided with professional facilities. Enrollment for the fall semester begins in August.

Enrollment information will be available on the WeChat account of Shanghai Mass Arts Center.

Yang says she hopes more young and middle-aged people will sign up.