Wu Siyi arrived in Songjiang on a horse at the age of 18, shortly after the city's liberation in May, 1949. He stayed, started his career as a photo journalist, and never left.

The first in the district to own a camera, he captured Songjiang's ups and downs along with Shanghai's and even China's twists and turns over the decades with more than 40,000 photos.

The 90-year-old now has a blurred memory of the long gone past, but he still carries his camera in a homespun bag, and presses the shutter to take snaps.

"I'm too old to travel around," he said. "But I can still make daily life records through lens."

The most important photo Wu took was the first National Day of the People's Republic of China in 1949 celebrated on the Malu Bridge part of Middle Zhongshan Road in Songjiang.

It was on the eve of the founding of New China. A bamboo archway decorated with lights and pine branches was set up, portraits of Chairman Mao Zedong and general Zhu De high on the top, and the big four Chinese characters "Wan Liu Gui Zong" (All the rivers running back to the sea) below.

Though black and white, the picture is radiant with pride and glory, as if the archway is shining in the clear night sky.

He photographed Songjiang's first march in commemoration of International Women's Day in 1951, the flag salute for the arrival of the Chinese People's Volunteers (and the North Korean People's Army) on the Songjiang Grand Playground, and the tearful farewell time when a young man said goodbye to his mother and fiancee before leaving for the army in Tinglin Town (today in Jinshan District) in the winter of 1956. 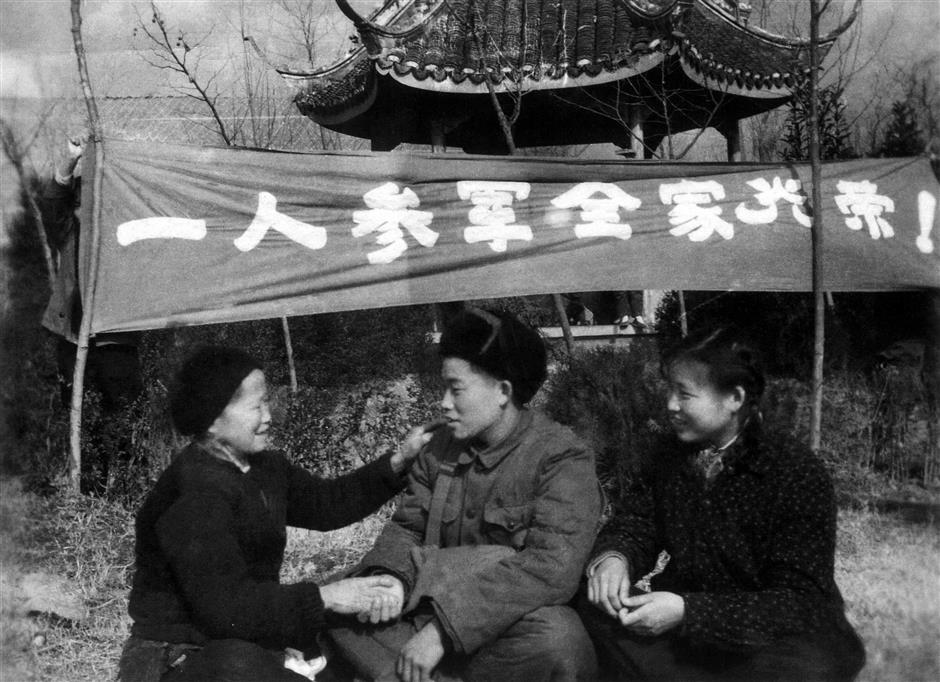 A major part of Wu's photos were focused on agriculture, a staple industry of Songjiang at that time. Located on the outskirts of Shanghai, the district is blessed with large patches of farmlands and crisscrossed waterways and was once a major rice and food producer for the city.

In a photo taken in 1952, two farmers are treading hard on a waterwheel in a rice paddy. In those days, local farmers mostly used manpower to draw water for irrigation, a low-efficient and laborious method. So some well-off farmers raised funds to buy a windmill, which greatly improved efficiency. 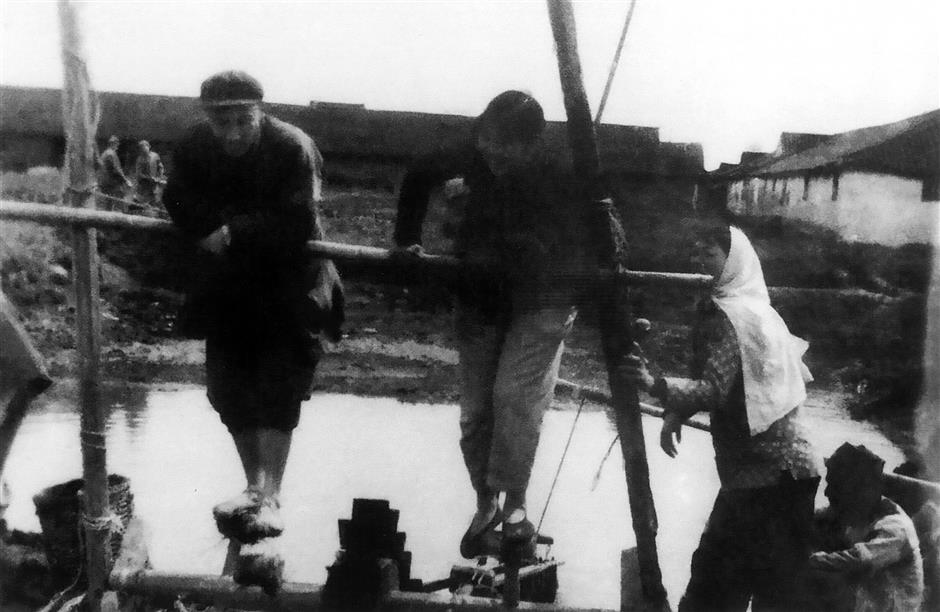 Two farmers treading hard on a waterwheel in a rice paddy

During the Great Leap Forward (1958-60), Wu ventured to the Northern Town Commune and snapped a grain sieve scene, where two young girls from the local insecticide factory are working happily in the cool summer night. On the wall behind them, the slogan reads, "Waste no time in August and September to have a bumper harvest before the National Day." 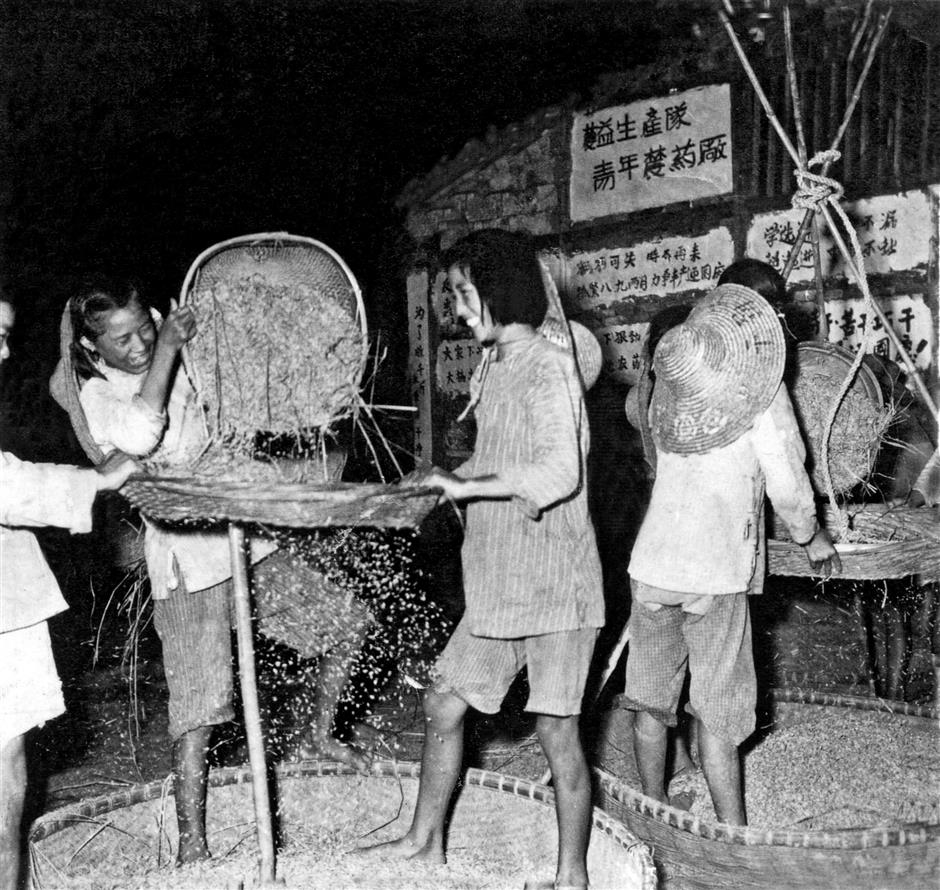 The photographer recorded many key events and historical moments of Songjiang, which offers a glimpse into the district's development. He shot the completion and test run of the district's first electric irrigation machine of East Town Commune, the renovation project of the Huangpu River's bank by ChangLou Team, and the opening of Songpu Bridge, the first construction spanning on the Huangpu River.

As a publicity official, Wu could not free himself from intense social and political events. However, he also took a great number of pictures that were "non-political" with his own intuition and interpretation of photography.

Wu pressed the shutter to capture the look of hunger on children's faces in the late 1950s, years of scarcity. Photos like this were not allowed to be published at that time, but today they offer us a clue to know more about that history. Perhaps the photographer was subconsciously trying to break out of politics by shooting daily scenes, which has saved us some precious visual documents about people's real life.

Most of the original film of Wu's works were damaged or lost in the years of turmoil. It took him a lot of effort and even risks to save the rest. After the reform and opening-up, he opened his files to take a new look at those old, dog-eared photos.

In 2009, Wu donated all of his works to the Songjiang Archives Center, and spent years filing and sorting them. But the project is still ongoing today because many photos are hard to be date and the photographer cannot recall events exactly. Even so, they offer us a panoramic view as well as a close-up of Songjiang's past.

"These precious pictures are a visual memory that plays an important role in studying Songjiang's changes and development," said Gu Zheng, a professor from School of Journalism, Fudan University. "Wu saved these memories for the future."

Special Reports
﻿
61771
,
Photographer captured development of Songjiang
Mosaic of China with Oscar Fuchs – Season 01 Trailer
The unique flavors, history and stories that make Shanghai coffee special
Uniqlo unveils upcoming clothing releases for fall and winter seasons
In the black with Montblanc's latest collection
An oasis amid Bangkok's hustle and bustle
Designing with global conciousness and flair
Delivering the milk a good insight into life outside my own world
Clinging to memories as homes and shops disappear from old street
Essence of Parisian chic highlighted in French brand's new fashion range
EXPLORE SHINE