Coffee fix in the city's first café under a bridge

For the denizens of the Wuning Road Bridge area in Putuo District, SKF Qiaoxia Café has become a sort of "Central Perk," the quirky coffee house in the TV sitcom "Friends."

Mornings, retirees drop in, order coffee and chat with the barista. Afternoons, white-collar workers from nearby office buildings come in for a coffee break.

And on weekends, the venue may host parties.

The cozy café, which opened eight months ago, doesn't even yet have an address. Its name Qiaoxia means "under the bridge," and that pretty much describes its location at Wuning Road Bridge over Suzhou Creek.

The café sits astride a creek-side road that goes under the northern approach to the bridge.

The site is one of the 25 new "stations" along the Putuo part of the creek, which provide facilities such as gardens, mini theaters, galleries and bookstores as part of a broad Suzhou Creek redevelopment.

SKF Qiaoxia Café under the Wuning Road Bridge has two separated rooms, connected by an auditorium.

"The coffee shop I used to go to shut down because of the COVID-19 pandemic," said a frequent patron of Qiaoxia Café.

"Then one day, when we were approaching the Wuning Bridge, my wife looked out and said: 'Is that a café?' I didn't quite believe her at first. Who would run a café under a bridge? And now, we just love the place."

The operator of the café is a mid-aged woman who is known only as Qian. Her customers usually call her Sister Qian.

"I have always been fascinated by coffee and its social culture," she said. "My dream café is a place for all, no matter who they are, workers, students or tourists. I hope it provides not only high-quality coffee and desserts, but also a sense of home."

She said locals were initially dubious about the prospects for the venue.

"They told us to think twice before opening the café here," Qian said. "There was road construction in the area, and there were few passers-by. Residents worried that the café wouldn't last long here."

Their concerns weren't unfounded. At first only vehicles came and went, and none stopped for a cup of coffee because there was no parking space. But later, when all the construction finished, the place became much more accessible.

The café has two separated rooms. One is open daily for food and drinks orders. It's a snug room favored by area residents, who include young and old, foreign and local.

"Now we have one full-time barista and several part-time ones," Qian said. "Some of them are hearing-impaired, and they have made friendships with our patrons." 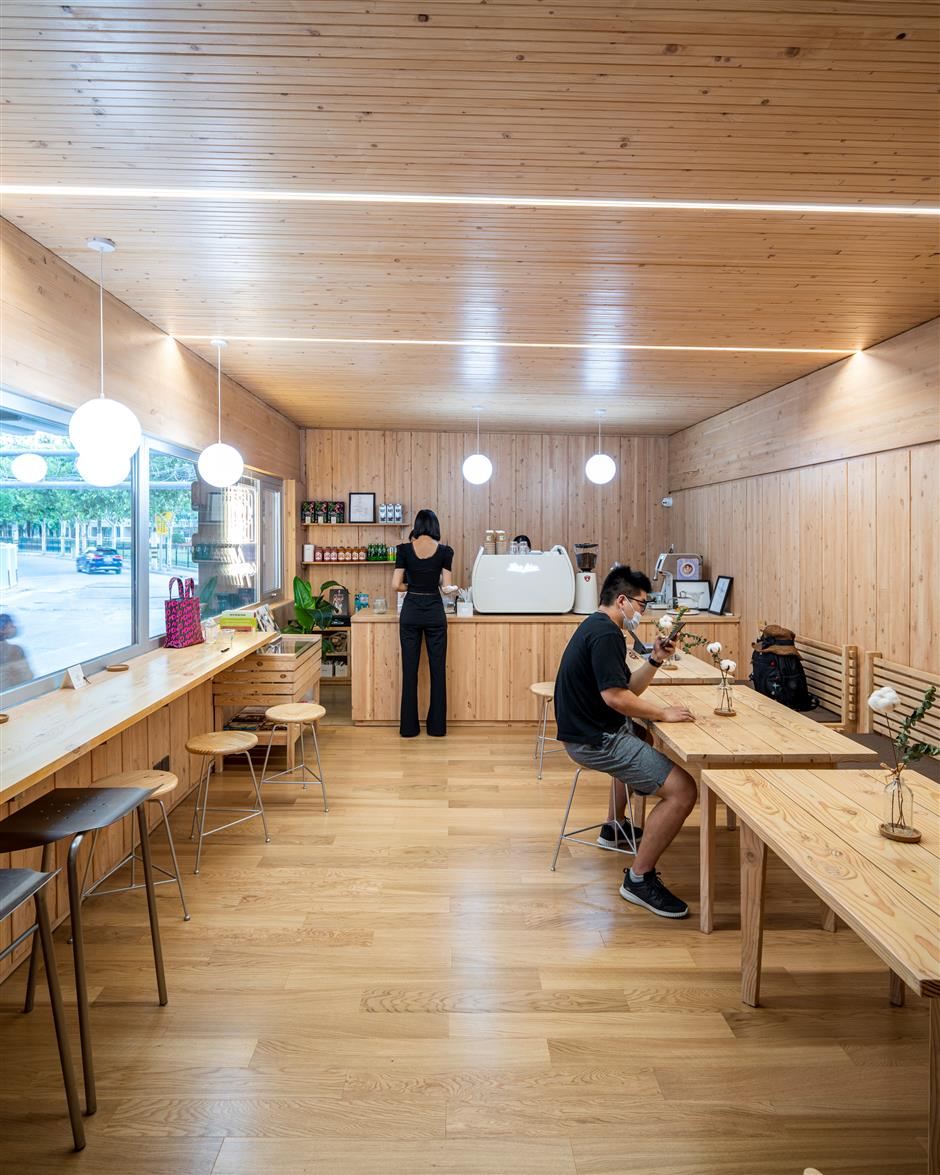 Locals drop in for coffee and snacks in the airy café.

The second room is a lounge used for community events and parties. It features a piano, an electric fireplace and a long table.

"Not long ago, we had a music student from Inner Mongolia come in," Qian said. "She saw the piano and immediately sat down and played while she sang. I asked if she would perform at community concert here."

The girl, named Meng Xin, agreed. She designed the poster for the concert and served as her own presenter for the event. People gathered in the lounge to listen to her playing Rachmaninoff and then singing in Mongol.

"I've been studying music for so many years, but I had never held my own concert," Meng said. "I never could have imagined that my dream would be realized in a café in Shanghai." 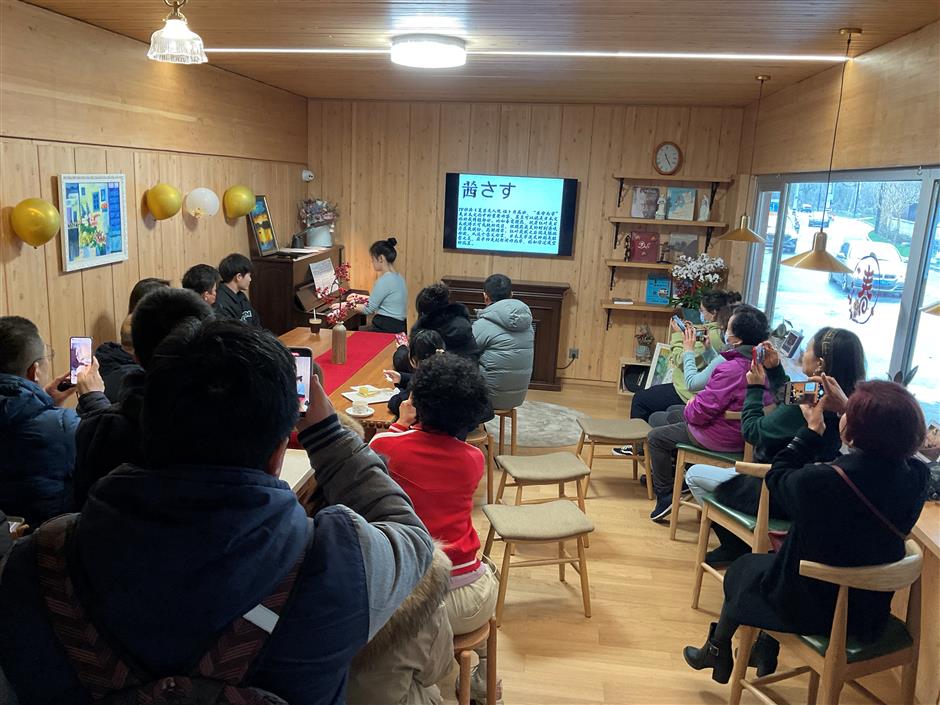 People listen to Meng Xin playing the piano at a community concert in the lounge.

The two rooms of the café are connected by a sort of open-air auditorium, with seating on one side of the roadway under the bridge and a wooden stage on the other side.

Barring that, the auditorium area has become a small gallery for artists and photographers. The current exhibition displays the works of Yang Min, an architectural photographer.

Yang said he has been following the Qiaoxia Café project since its inception. He captured the entire process of transforming what was a parking lot to what it is today.

"One of my favorite pictures is the one of the stage on the opposite side of the café, illuminated by the sun like a ray of holy light," he said. "It was a stroke of luck." 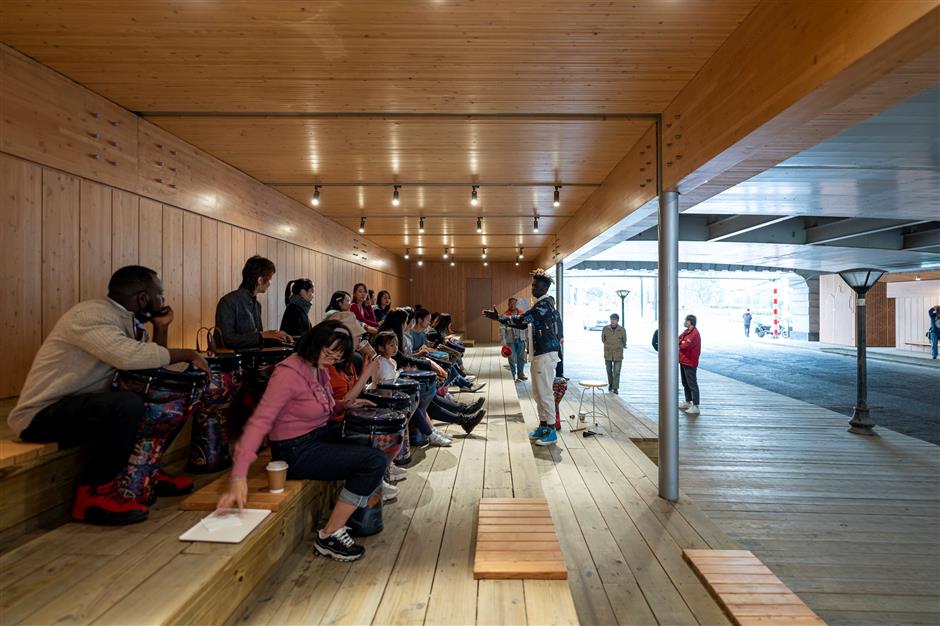 An unenclosed auditorium, with seating on one side of the road and a wooden stage on the other.