Cycle around the best autumn scenery in Changning

One of the things I like most in Shanghai is to hop on a bike and enjoy the different scenery of the city.

Golden foliage on Julu Road, skyline along the Huangpu River, paddy fields on Chongming Island and the city's ever-expanding greenway ― each brings a newfangled biking experience.

With a total length of 6.25 kilometers, the Changning Outer-Ring Greenway is the only one of its kind that runs through a whole district in Shanghai. 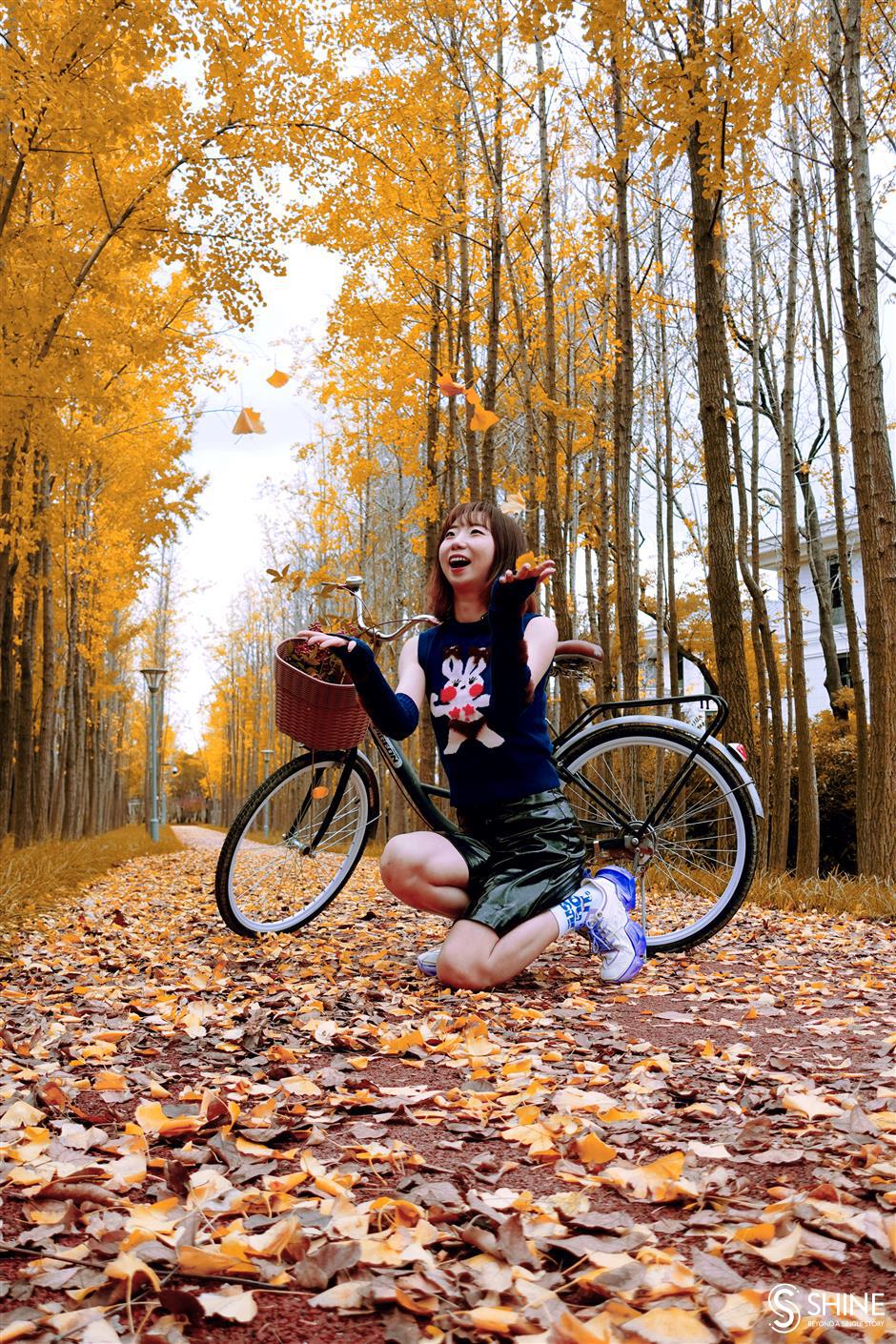 The greenway is great as you don't see any waterfalls, towering cliffs or mountainous peaks. And, contradictorily, that's the absolute charm of it. The beauty is the route itself and being out, immersed in the city's colorful autumn scenery.

During the trip, you'll cross the dawn redwood forest, get engulfed in blooming hairawn muhly, ride over golden ginkgo leaves, pass through viaducts and rivers – nine bridges, a box culvert, a tunnel and an overpass were built to keep the greenway running, each with a unique design. 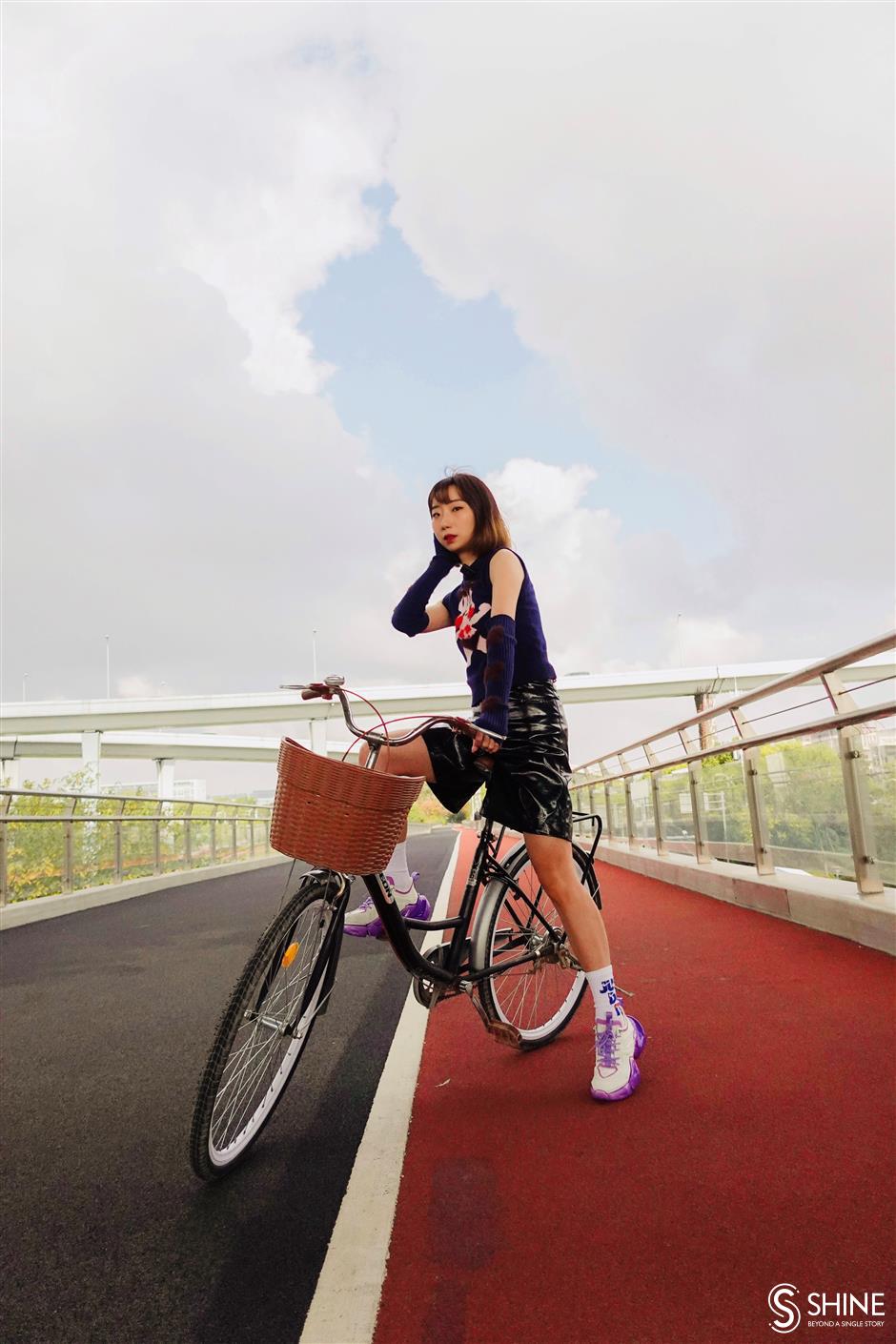 A view on the overpass during the biking trip

Accompanied by Cheng Long, a landscape architect of the greenway, I found a lot of plants rarely seen in daily life, as well as interesting details of ecological designs.

Cheng told me that there are 158 different types of plants along the greenway. The sea of flowers appear in every season: cherry blossoms and four kinds of magnolia flowers open spring; golden wave coreopsis starts in May; hydrangea brings in early summer; pink muhly grass colors fall, even in winter; and the wintersweet flower blooms to celebrate the Spring Festival.

During the biking trip, I crossed several wisteria corridors full of bean pods, which must be splendid when they bloom in spring.

Fiona bikes across a wisteria corridor.

According to Cheng, autumn is the most beautiful season for the greenway. In addition to the colorful maples and gingkos, the rosemary, verbena and Mexican salvia give off fresh scents. 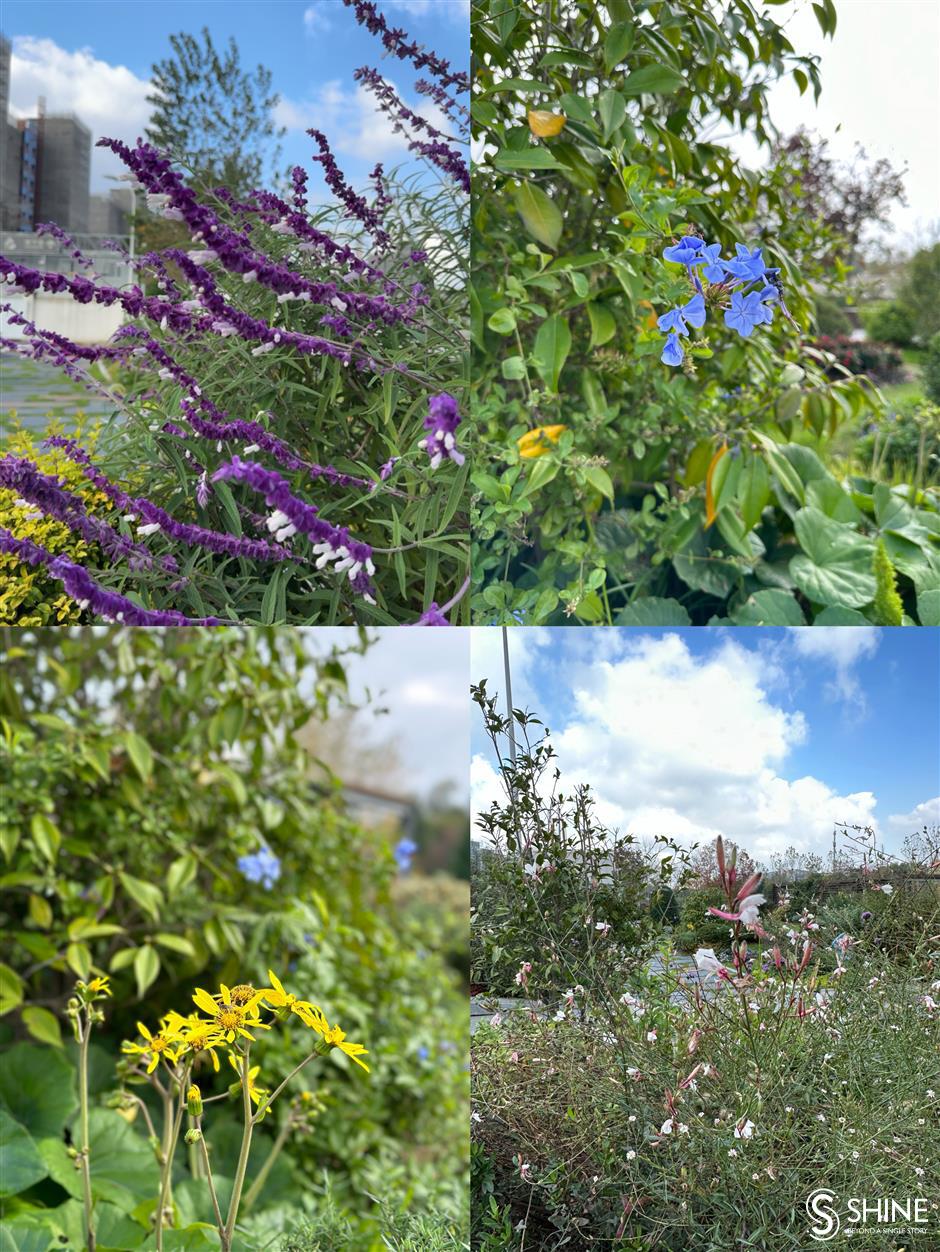 There are blooming flowers all the way on the route.

Do not miss the Chinese tallow tree. As a native tree species of China, it has a history of 1,400 years. It has heart-shaped leaves and popcorn-like fruits, which is one of the favorite foods of migratory birds, so local people always call it "popcorn tree."

The popcorn-like fruit of the Chinese tallow tree

The heart-shaped leaf of the Chinese tallow tree

This deciduous tree puts on a magnificent autumn display. Before the leaves drop in fall, they turn from green to beautiful shades of red, gold, orange and purple.

It's rarely seen on the city streets, but there are plenty of them along the greenway.

Then you arrive at the dawn redwood forest, one of the most popular attractions of the greenway. It's got the name "Jinglin" (mirror forest) due to the unique landscape – the dawn redwood reflected on the water. 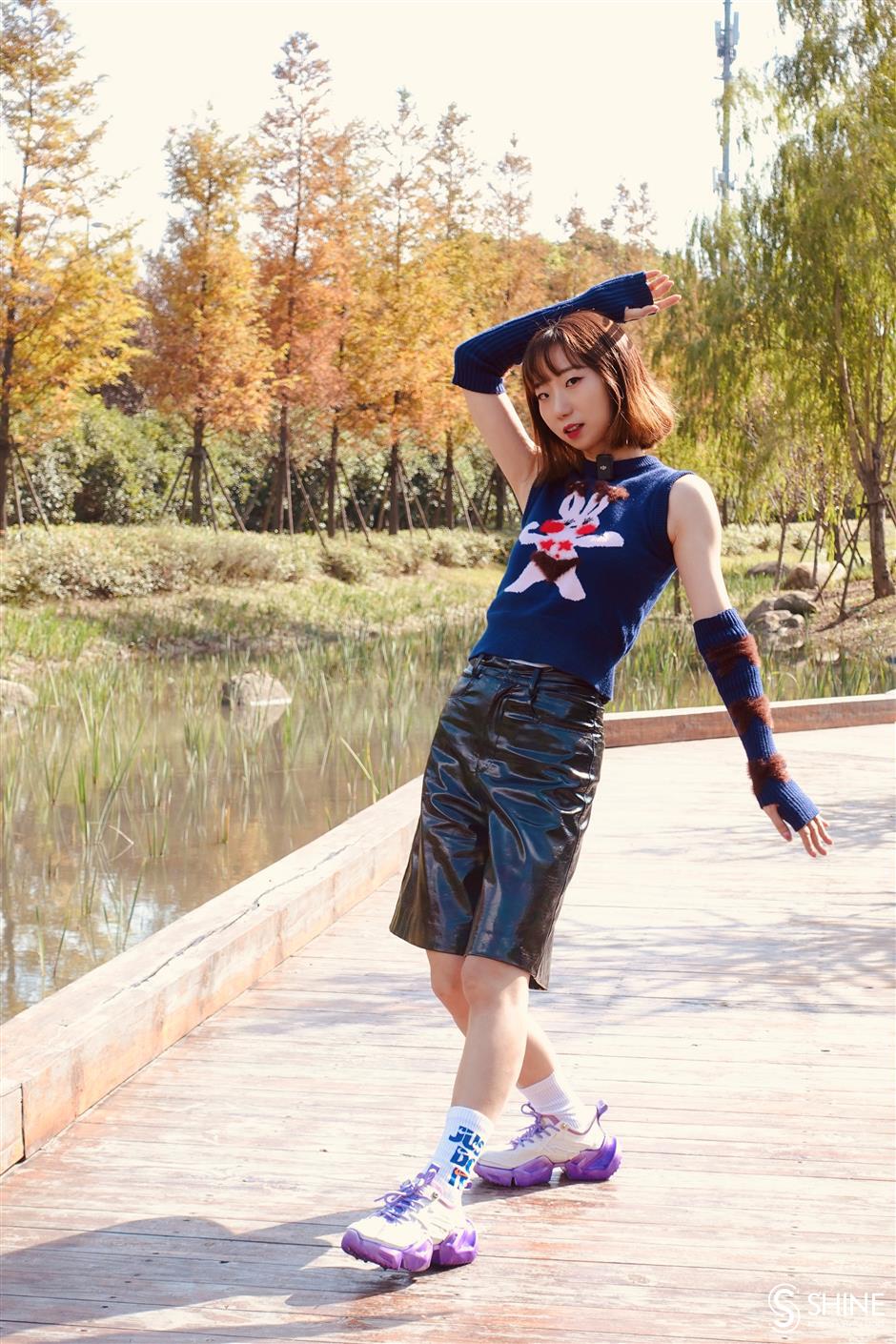 The mirror forest is a hot attraction for avid photographers.

"The mirror forest is an artificial wetland in an urban area, a part of the sponge city design, in which rainwater is kept and absorbed where it falls through sustainable urban drainage systems, collected and treated in urban run-off before it reaches the rivers," Cheng explained.

The 10.78-hectare water area along the greenway is also a bird habitat. Egrets and gray-tailed magpies flew overhead during my short 10-minute walk on a wooden bridge across the dawn redwood forest.

A bird is seen in the greenway wetland.

In this harvest season, crabapple trees are heavy with fruits. I picked up one, a little sour, but it reminded me of my childhood – crabapple used to be a classic snack for kids in autumn.

At the southern end of the greenway, a golden gingko forest displays one of the best autumn scenery of the greenway. The path is covered with a thick layer of gingko leaves, flying around you as you ride by, offering a great experience of the golden season. 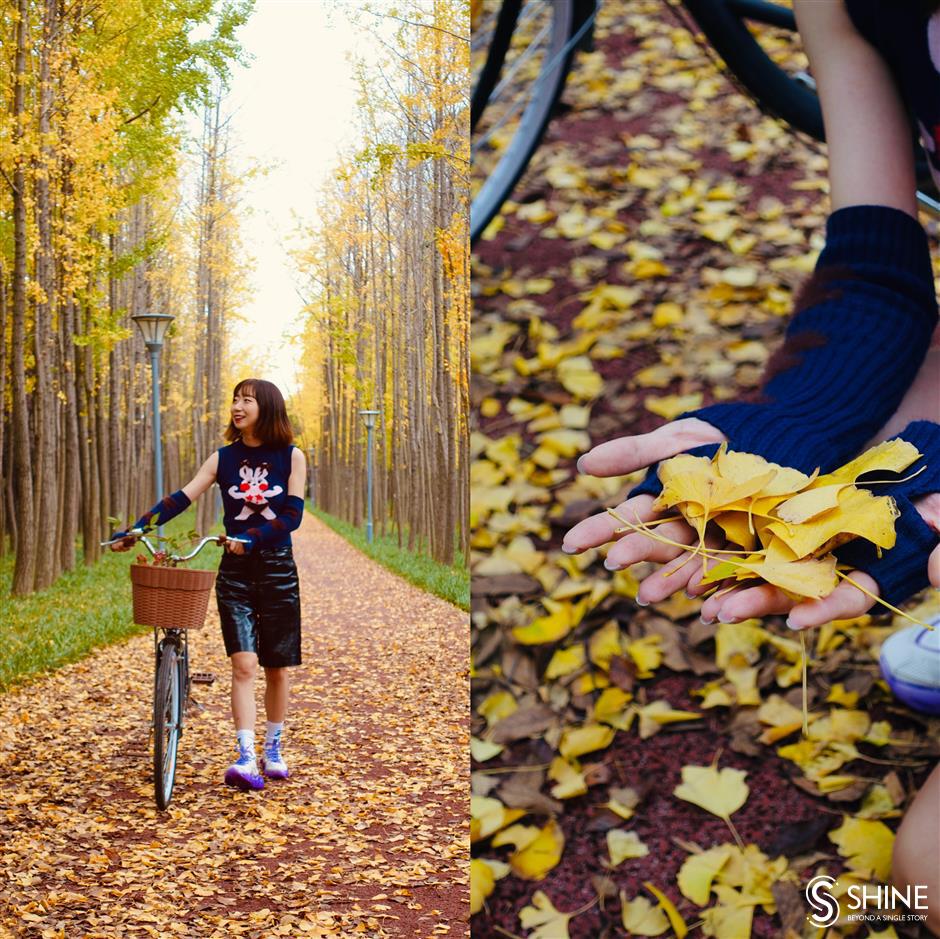 The golden gingko forest at the southern end of the greenway

During the biking trip on the greenway, there are several stations where one can rest, get drinks from vending machines and charging your mobile phone for free. 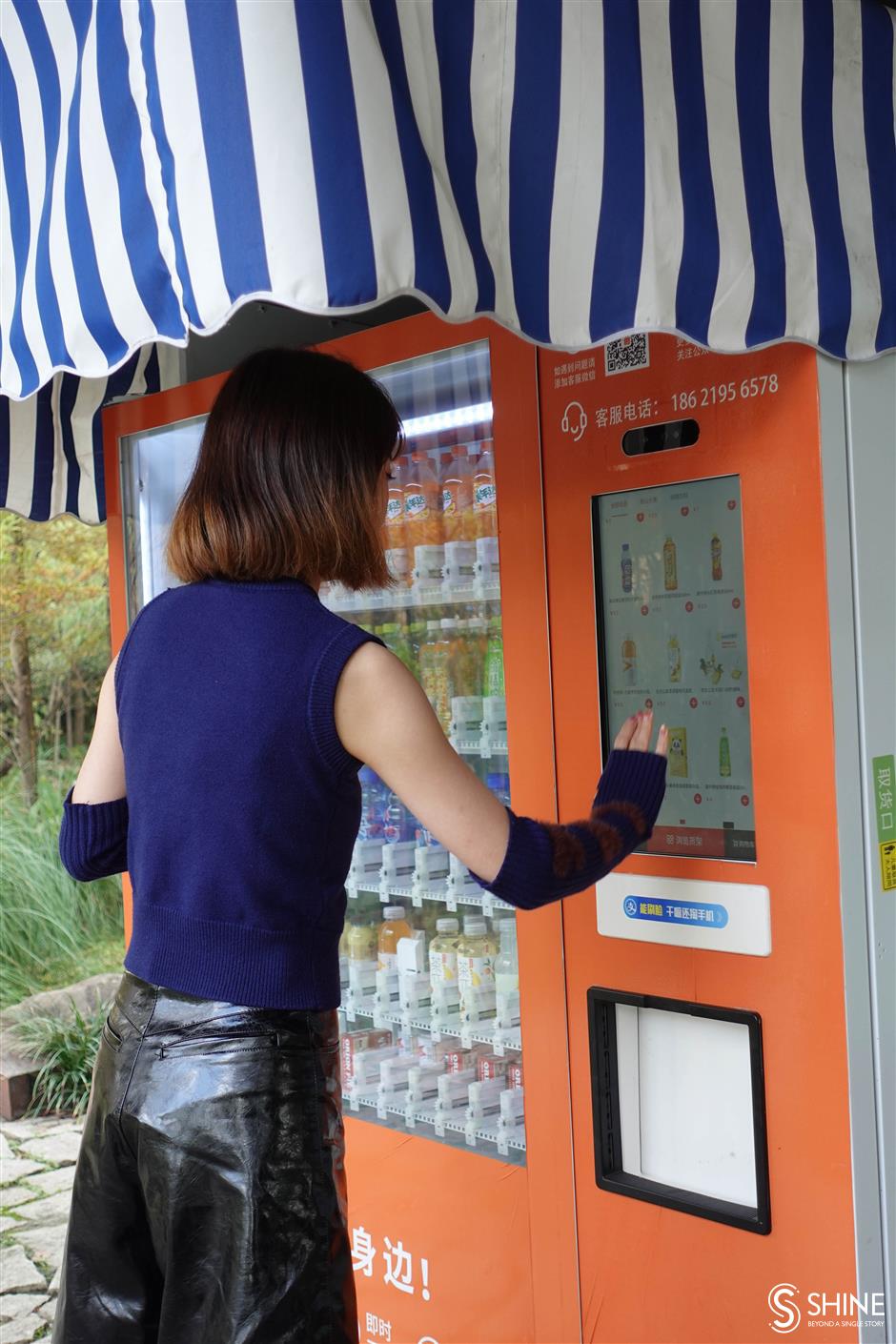 Fiona buys drinks from a vending machine on the greenway.

Shared bikes are not allowed but bicycle rental service is available at the Guangshun Road N. and Xianxia Road W. entrances, or you can bring your own bike. 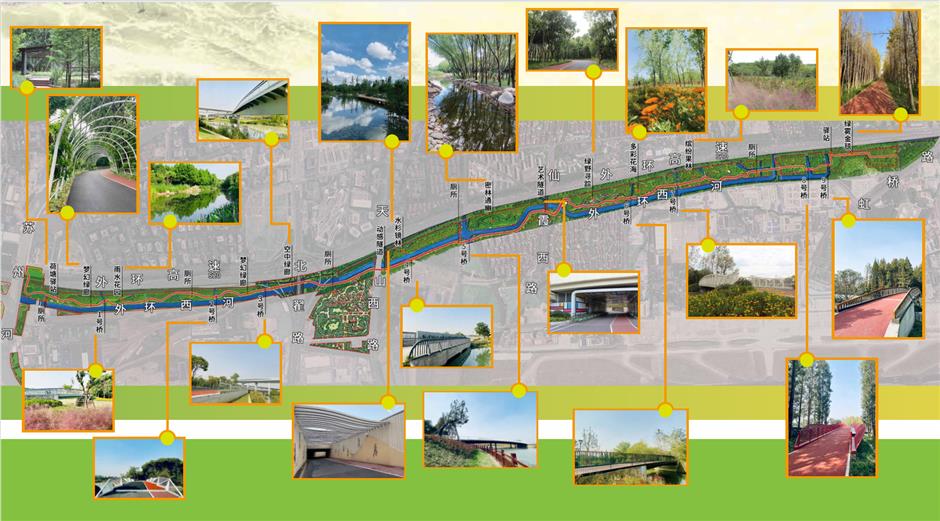