The power of 3 in adding spice

Varying in size, texture and flavor, they can be a simple herb to elevate meat and other vegetables and remove unwanted tastes, as well as becoming the star with distinct refreshing, garlicky and spicy flavors.

This week, we’ll take a look at the three greens that look similar but which play different roles in Chinese cooking. 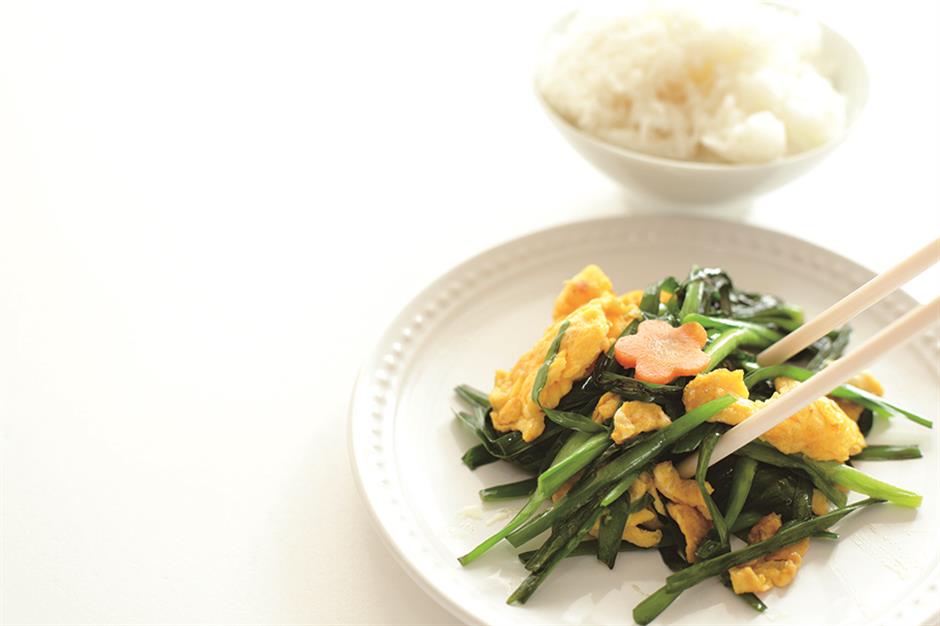 The thin, tender scallions are sometimes also known as green onions, or xiaocong (small scallions), a very versatile vegetable often used for adding flavors and as garnish on dishes in Chinese cuisine.

Scallions are very cheap, and local vegetable vendors often offer a few sprigs of fresh scallions for free when you buy other vegetables.

Scallion oil is a classic Shanghai-style sauce. This iconic fragrant oil can be stored in the fridge for a few months and used in a variety of dishes to add flavor, especially with noodles.

Scallion oil uses young scallions. They are rinsed, dried and cut into small segments, then mixed in a sauce of light soy sauce, dark soy sauce and sugar. Fry the scallions in vegetable oil on a low heat until they become crispy and browned, then quickly add the sauce to the fried scallions and cover with a lid to avoid spattering. Stir until bubbling and the scallion oil is ready. After it’s cooked, it can be stored in clean, dry glass jars or containers. 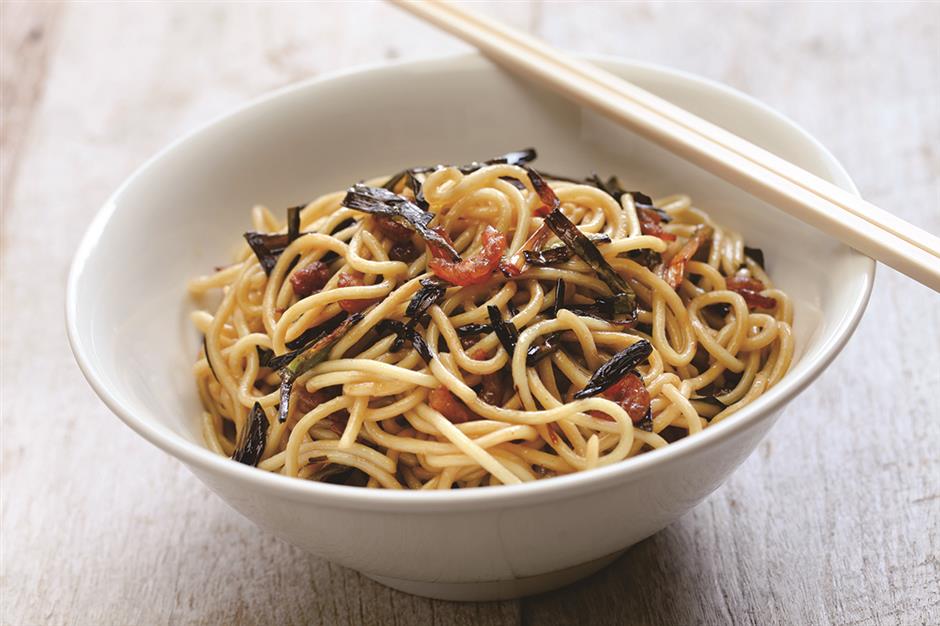 Some people add spices such as star anise and cinnamon as well as onion and cilantro to elevate the flavor.

To enjoy the fruits of your hard labor, simply boil some thin noodles, drain them and mix with a few tablespoons of scallion oil and some of the fried scallions. It’s a quick, aromatic and comforting dish perfect for breakfast, lunch and dinner.

The small, round pancakes with their crispy edges and aromatic soft centers are a guilty pleasure. The strong flavor of the scallions is accentuated in the pancakes, which are complemented by the rich ground pork and lard added to the dough. The pancakes are first pan-fried on a hot griddle and then baked in a barrel.

Scallion and egg pancake, on the other hand, is a softer jianbing with much less grease. Eggs are beaten into the flour batter and then it is cooked in a non-stick pan, a convenient recipe for busy mornings. 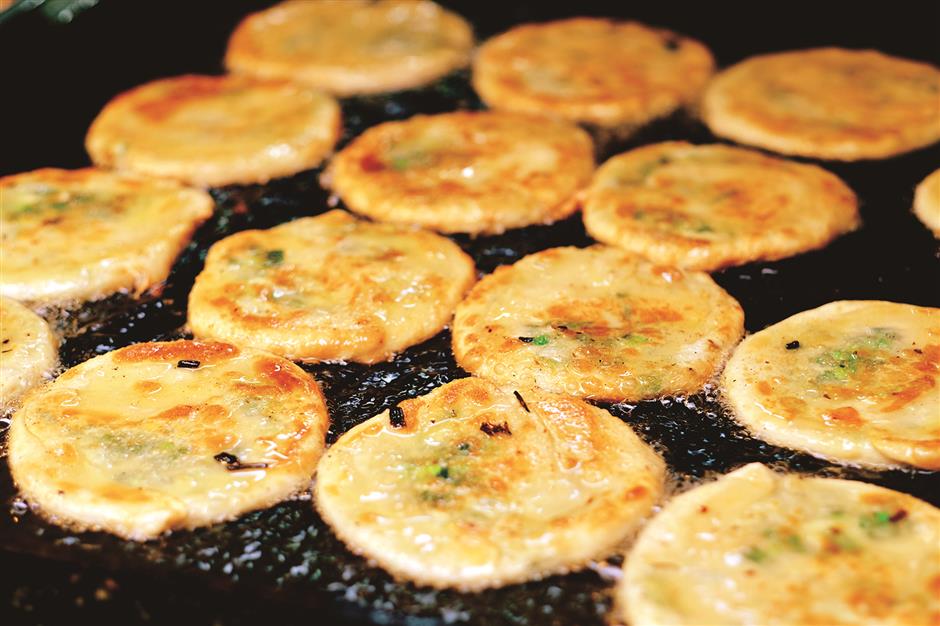 Scallion and tofu salad is a very welcome appetizer in the hot summer and ready to eat in a few minutes. Using the tender cubed tofu, simply sprinkle a generous amount of chopped scallions and pour on a dressing of light soy sauce, vinegar, salt, sugar and sesame oil.

Scallions are not only used in savory dishes, but also snacks such as scallion cookies, crackers or pastries. These sweet and salty scallion treats are popular with people who don’t want their desserts to be too sweet.

Leeks look similar to scallions but are much larger. The dark green tops are more fibrous and the white end packs more juice as well. Leeks are enjoyed as a green vegetable or seasoning in a variety of dishes.

Shandong is famous for producing leeks, especially large leeks averaging 50 centimeters in length. The leeks produced in Zhangqiu are known as the “king of leeks” for their enormous size that can be taller than a grown man.

People in Shandong loves leeks. They not only cook with leeks, but eat the vegetable raw with salty sauces. These leeks, though, are less spicy and stinky than the normal kind. They’re sweet in taste and quite juicy.

The Shandong-style jianbing uses a crispy thin pancake made from a flour of corn, sorghum and millet, which is served by wrapping leeks inside for a crunchy texture and fragrant, spiced flavor.

Finely shredded leeks are part of the classic sides to serve with the iconic Peking duck, adding a hint of spiciness to complement the richness of the duck skin and meat.

As a vegetable, leeks are usually sliced and used in stir-fries cooked over a very high heat and completed in minutes such as leeks with beef, pork, scrambled egg and lamb. The key is to stir-fry the thinly sliced meat (or eggs) first in oil, remove from wok and then stir-fry the leeks with some garlic paste until the aroma comes out and the texture softens. The final step is add in the cooked protein and stir some more while seasoning to taste.

Leeks have the property of neutralizing the meaty or fishy taste in raw ingredients, while adding a unique flavor to dishes. The bottom and middle parts of the leek are often used in braised dishes and stews, and you can save the tender green leaves and finely chop them to garnish.

Leek and pork is a classic filling for dumplings, buns and pancakes. It not only adds fragrance to the fillings and brings out the umami flavor of the pork, but also provides a natural sweetness.

If you are not a huge fan of leeks and don’t wish to enjoy them as a vegetable, you can add a little chopped leeks as an aromatic in pork or mutton minces alongside ginger to tone down the meaty taste. 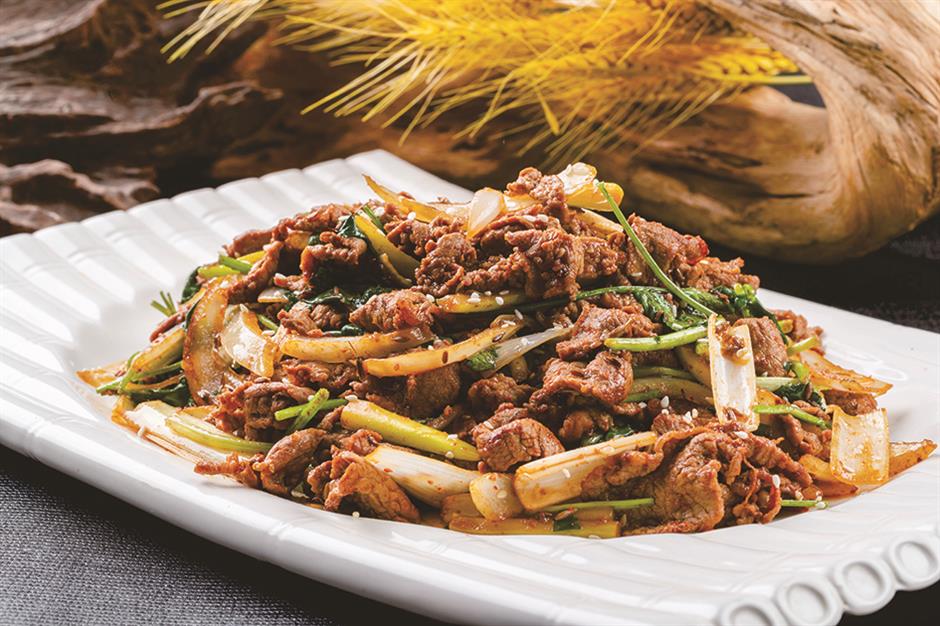 Garlic sprouts are a fragrant green that look similar to leeks: white base and long green stalks. They’re grown from garlic and the white part is sometimes covered by a thin purple skin.

There’s also a little confusion regarding its name when you are living in Shanghai. In the local dialect, garlic sprouts are referred to as dasuan, which is the name for garlic in other places, while garlic is called suantou.

The fresh garlic sprouts sold in the market are grown in soil and are larger with thicker stalks. Washing garlic sprouts requires patience as the ends are muddy and dirt can get between the leaves.

Garlic sprouts have a delicate sweetness besides the garlicky flavor, and a quite meaty texture compare to scallions and leeks. Typically, garlic sprouts are cut into small segments and stir-fried with meats that boast rich flavors, including thinly sliced pork belly, cured pork and sausage, pork liver and more.

They are an essential ingredient in the famous Sichuan-style huiguorou, or twice-cooked pork, a perfect dish to accompany rice that’s made by stir-frying thin slices of cooked pork belly meat and garlic sprout with broad bean paste, garlic, chilis, soy sauce, sugar and ginger. Garlic sprouts and scrambled egg is another classic, quick recipe.

A vegan recipe to enjoy garlic sprouts is stir-frying it with tofu. After lightly frying both sides of the tofu slices, add in the garlic sprouts and cook for a few minutes with soy sauce, salt, peppercorn oil and garlic. You can also use the thick tofu sheets to replace meat in stir-fry dishes. 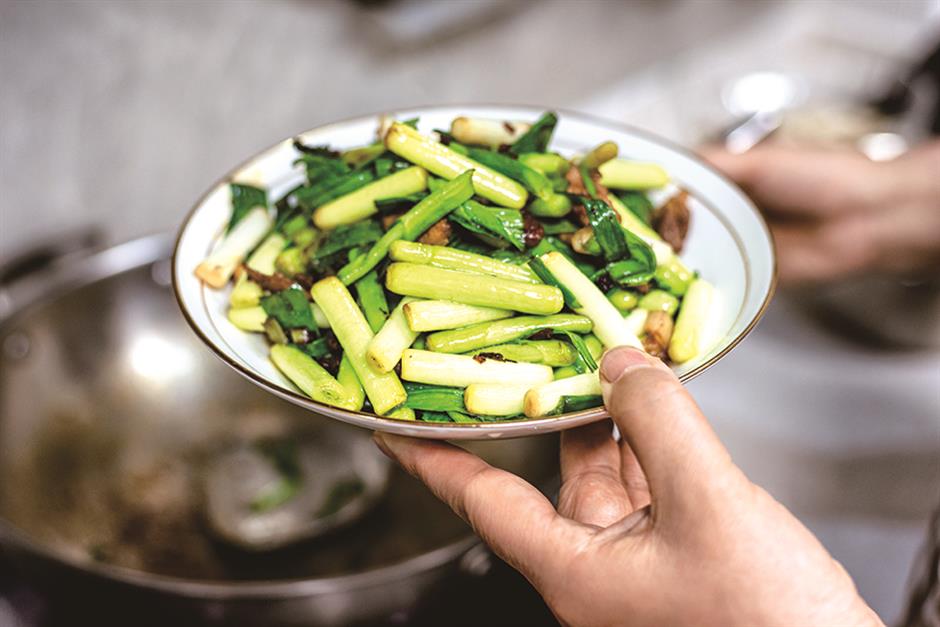 If you are mostly using garlic sprouts in small amounts as a flavoring element or garnish, you can grow your own by peeling and breaking up several heads of whole garlic then place them in a shallow dish and add water to reach half the length of the garlic cloves. Put them in a place with sunlight and observe every day to refill water when needed. If too much water is added, the garlic cloves will slowly rot.

The sprouts are ready to eat when they grow to about 15 centimeters. Cut them off with scissors from the bottom and leave a little bit of the sprouts in the garlic, it may grow another batch soon.

Garlic shoots (or garlic scapes), on the other hand, are the long, thin and round bright green stems that shoot up from the garlic bulbs. They are crunchy, fresh and mildly garlicky. The most popular way to enjoy garlic shoots is to stir-fry quickly with meat, or make simple pickles with a brine of vinegar, light soy sauce, peppercorn, salt, ginger, star anise and sugar.