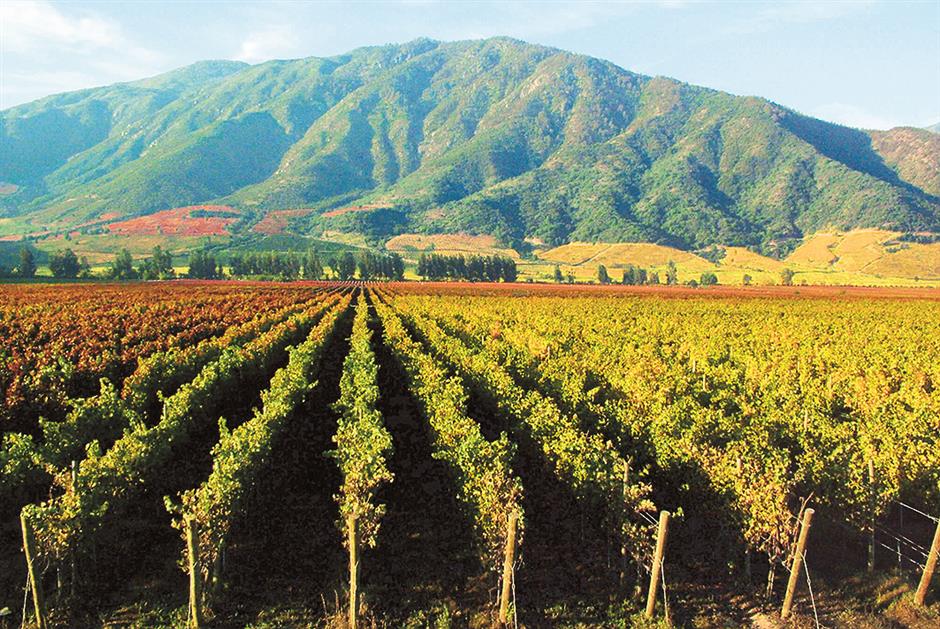 Rapel Valley vineyards approaching the steep hills of the Andes

While my perspicacious friends at Shanghai Daily are introducing a savory journey of beef dishes to celebrate the Year of the Ox, in today’s column I wish to focus on the singular excellence of steak with red wines. After all, steak paired with a premium red wine is now an internationally beloved epicurean experience that’s also a great way to ring in the Chinese New Year. But alas, steak isn’t quite what it used to be.

The last truly great — and in the domains of food and wine I don’t use this adjective lightly — homecooked steak I had was over three decades ago in Fairfield, Connecticut. The majestic thick-cut, dry-aged Porterhouse steak from a local family-owned butcher shop was a thing of beauty. The bright red meat well-marbled with perfectly white fat was lightly marinated in coarse salt, fresh black pepper with a light rub of olive oil. Cooked on our outside charcoal grill, the resplendent flavor and texture of the meat lives on in my memory as does the bottle of 1959 Chateau Haut-Brion my dad chose to accompany our beefy beast.

Today in Shanghai as elsewhere, steaks are less fatty and seldom dry-aged. Good dry-aged steaks can be found, but they are not comparable to those of yesteryears. The USDA has downgraded their standards for prime meat, and the elite steaks are reserved for privileged steakhouses. Well-marbled Japanese and Australian steak cuts, while certainly super tender and yummy, still can’t replicate the aged intensity or depth of flavor of dry-aged steaks served in classic US steakhouses. Contemporary steakhouses are products of evolution.

Beefsteak clubs started in London in the mid-18th century. They were a primitive precursor to steakhouses where like-minded gents would dine at a large hall once a week. There was plenty of ale and both meat and manners were rather rough. Decades later chophouses open to the public became popular in London and New York. No women were allowed in, and generous slabs of simply prepared beef, lamb or other meats were served with little decorum. Beer and ale remained the beverages of choice.

The modern steakhouse has its roots in 19th century New York when restaurants like the Old Homestead and Delmonico’s started serving high-quality cuts of beef steaks. These same classic cuts like sirloin, NY cut, T-bone or filet, etc, accompanied with baked or fried potatoes and creamed spinach sides, haven’t changed much over the past century plus. What did change was the beverages.

In the 19th century the beverage of choice at steakhouses was still beer but by the 1920s and beyond the preferred quenchers became cocktails and spirits.

So, this holiday season you can enjoy both a delicious cut of steak as well as a bottle of premium wine.

Concerning the latter, I’ll be looking at something quite a bit more reasonably priced than a 1959 Haut-Brion — and I know just where to go.

Flanked by the Coastal Range and Andes Mountains, Rapel Valley runs north to south for 100 kilometers. This large region is located in the Central Valley and accounts for nearly a quarter of all Chilean wine production. The region gets its namesake from the Rapel River that divides the two sub-regions of Colchagua Valley and Cachapoal Valley. The warm dry region benefits from plentiful fresh and mineral rich meltwater from the Upper Andes, as well as cool evening breezes from the Pacific Ocean that cool the vines and preserve acidity in the grapes.

Winemakers use Old World varieties and techniques but they also break traditional rules by blending Bordeaux varieties with Syrah and Pinot Noir. Results are impressive, especially when accompanied by a juicy steak.

Located in the heart of the region is one of my favorite Chilean wineries. Lapostolle was founded by Alexandra Marnier Lapostolle and her husband Cyril de Bournet in 1994. I wined and dined with Alexandra in Taipei almost 20 years ago and ever since then I’ve been enamored by her generous yet also elegant wines. Notably she’s a member of the family that owns the world-renowned Grand Marnier liquor and other spirits.

Founded in 1984, Lapostolle owns 370 hectares in three distinct regions, namely, the warmer Cachapoal and Colchagua sub-regions within the Rapel Valley for most of the reds and the cool climate Casablanca Valley for their Chardonnay. But it’s the Carmenere, Cabernet Sauvignon and red blends of the former two regions that are perfect steak companions. Other producers of steak-friendly red wines from Rapel Valley include Casa Amada, Alicanto and Concha y Toro. Recent Rapel Valley vintages are all fine but look for the very good 2014 and 2013 vintages.