Heartbeat of Healthcare
Shot by Ma Xuefeng. Edited by Zoe. Subtitles by Emma and Andy Boreham.

You lie in bed, close your eyes and the next thing you know, it's morning. Or you lie in bed and toss and turn until almost dawn, worrying about an exam, family problems or household finances.

An estimated 40 percent of people in China struggle to get a good night’s sleep. Some suffer apnea, a disorder where a person periodically stops breathing during sleep. Others may suffer nightmares.

Professor Yu Huan with the Sleep and Wake Disorders Center of Fudan University at Huashan Hospital deals with such patients every day.

The center recently opened up a new ward in the hospital’s Hongqiao branch, dedicated to sleep deprivation diagnosis and treatment. It’s booked solid into the end of September.

“Study into sleep-related disorders is still at an early stage,” says the professor, who is in her 40s. “Before coming to us, many patients have tried other medical departments without getting their problems really solved.”

But there’s no doubt about the need for specialized treatment of sleep disorders, according to Yu. 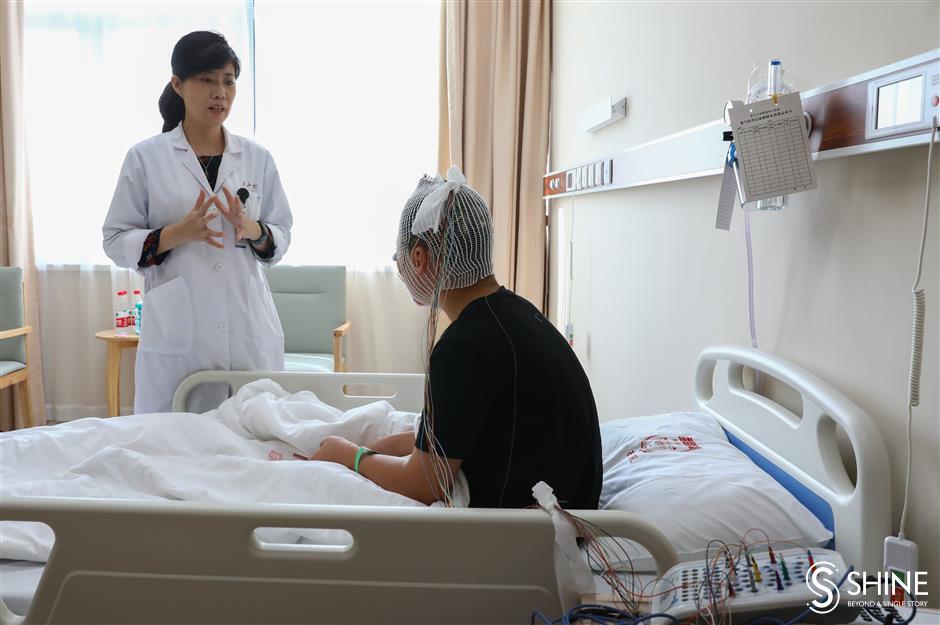 Dr Yu Huan checks on a patient in the ward dedicated to people suffering from sleep disorders.

“Unlike most other wards where patients stay temporarily for treatment, our patients sleep here, mostly for diagnosis,” Yu says. “They stay for one or two nights, and we monitor their movements during sleep.”

A set of instrument sits on a bedside table to monitor patients, whether awake or asleep. The instruments include an electrocardiogram monitor that can be attached to the patient’s head and other body parts.

In an office nearby, technicians sit for hours a day to record and analyze data transmitted from the instruments, including a patient’s brain waves, pulse and blood oxygen levels.

“The office operates around the clock, and technicians who can read such data are rare as pandas,” Yu says. “That’s why they always work overtime. Some of them even stay overnight at the hospital for days on end. To be honest, their pay does not really adequately compensate them for their work.”

The instruments were tested on medical workers in the hospital before they were used on patients.

Apnea is more widespread than most people might think. Signs of the disorder are relatively common problems that may mask its presence, including loud snoring, daytime fatigue even after a full night’s sleep, awaking with a dry mouth, morning headaches, difficulty in staying asleep and irritability.

“One young woman didn’t know that she had the disorder, beyond the fact that she snores,” says Yu. “However, the case was quite serious. Her oxygen saturation dropped to 60 percent once, compared to a normal person’s 97-99 percent. If frequent oxygen deficit continues, it can harm the heart and blood vessels in the brain.”

Sleep disorders are often concealed beneath symptoms that don’t cause alarm.

One of the center’s earliest patients, a 14-year-old boy from Jiangsu Province, was one example. He couldn’t keep from falling asleep in class. 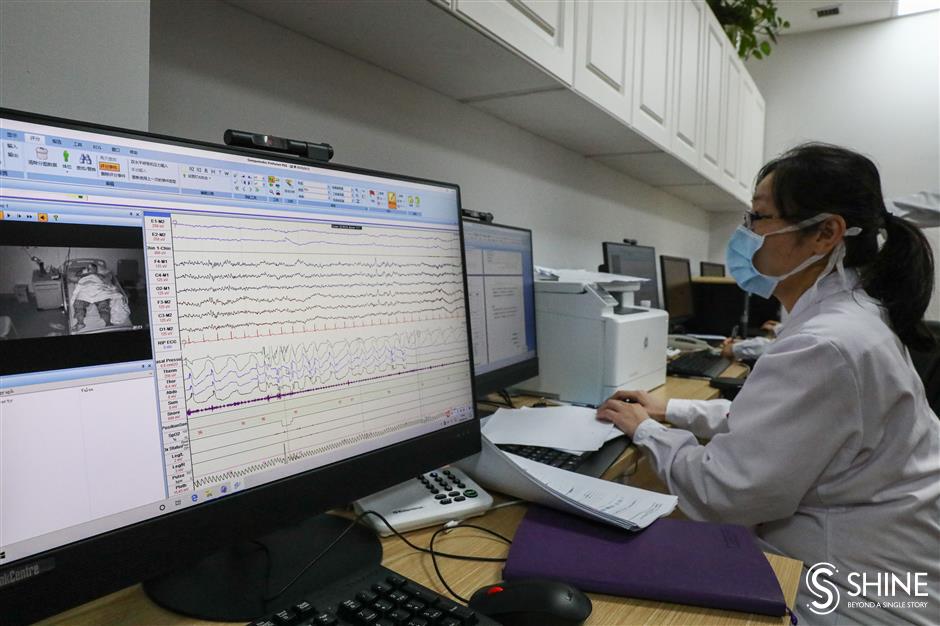 A technician analyzes the data collected by the monitoring instruments.

“We sent him to a boarding school, and one day the teacher texted me to say that my son might be weary of studying because he often sleeps in class,” says his mother, who asked to remain anonymous.

“At first I thought he might have some learning disability or problems with his classmates, but then he called me and said, ‘Mom, I don’t hate school, but I just can’t stay awake and I don’t know why.’ That’s when I realized that he might actually be sick.”

The mother searched sleep information online and found Yu. She took her son to the sleep ward.

The doctor found that the boy was suffering from other symptoms besides drowsiness. He had gained 6 kilograms of weight in just two months, and felt a lack of strength when he laughed.

“No one knows the exact cause of this disorder,” Yu says. “Some hypothesize that the transmitter cells might die out slowly for several years after birth, and then symptoms show up.”

Yu looks at diseases as puzzles to solve. She began her medical career in neurology after graduating with a doctoral degree in 2006.

A year later, when a sleep disorder expert from France visited Fudan University, Yu served as his interpreter. That led to an invitation for her to study the subject at the University of Montpellier. When she returned to Shanghai from France, she created the sleep disorder center in 2010.

“We have put a lot of effort into educating the public about sleep, but there is still a long way to go,” Yu says. “In fact, sometimes sleep-related symptoms might be early signs of more serious diseases.” 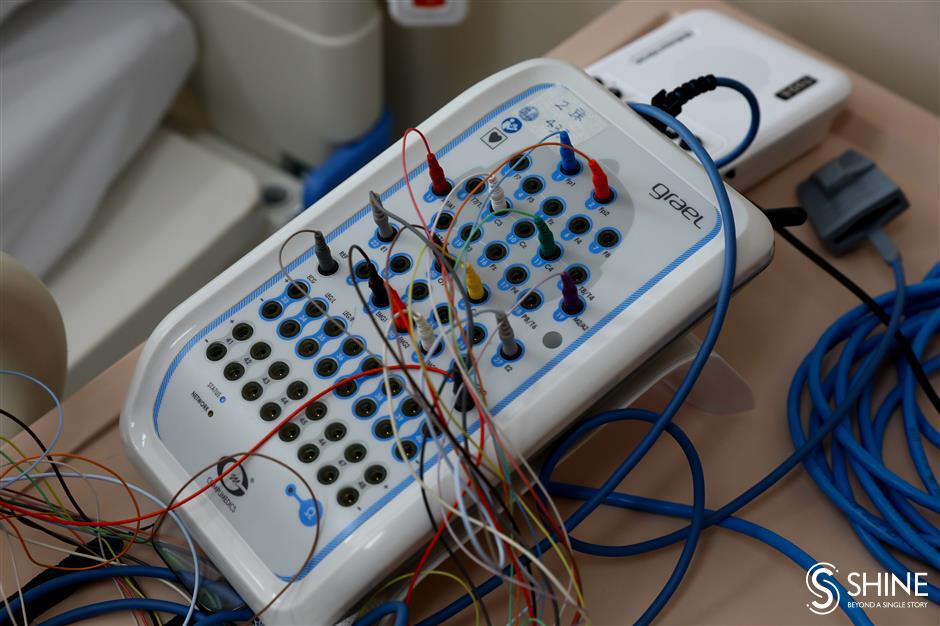 An instrument that monitors patients’ vital signs while they sleep.

One example is called “rapid eye sleep behavior disorder,” wherein a sleeper physically acts out vivid, often unpleasant dreams with vocal sounds and violent body movements. The situation occurs during REM sleep, a normal stage that accounts for about 20 percent of sleep time.

Yu treated a 93-year-old retired lawyer, whose dreams took him back to his contentious courtroom days. He used to talk so loudly in his sleep that his wife couldn’t sleep. She eventually convinced him to seek help. Yu prescribed medicine to mellow his dream time, and that solved the problem.

﻿
Special Reports
﻿
61875
,
Some home truths: the calming effect of food on people
Podcast: One man's obsession with birds chirping is music to the ears
Upcoming Asian Games to be carbon-neutral for the first time
Quarantine field for Asian Games' horses wrapped up
Podcast: Dealing with stress during lockdown
Podcast: Be a strong person, truth does not need a lot of words
Podcast: Simple images can help in shaping the way we think
Podcast: Pandemic reshaping our relationships
Podcast:Behavioral addiction can be corrected at our own discretion
City offers incentives for migrant workers to stay put in city during holiday
EXPLORE SHINE