Therapists tune in to kids that are speech-impaired

Four-year-old Yao Yao finally managed to say "papa" for the first time. The girl, who received surgery for a congenital cleft lip and palate, had not been able to talk at all until the operation. Her parents took her to a Shanghai-based speech therapy institute called Voice Changer where, after several sessions of training, she found her voice.

Launched in 2019 by Du Xintong, a broadcast major at college, Voice Changer's employees are comprised mostly of people under 25 years old. Its patients have different problems – some have a cleft lip like Yao Yao, some are autistic or suffer from hearing disorders, while others just don't speak after passing the age they are supposed to.

"Whenever a speech-impaired child starts to speak – many say 'mama' or 'papa' for the first time – we see their entire family glow with happiness," Du said.

"These moments make me feel that I made the right choice to start Voice Changer." 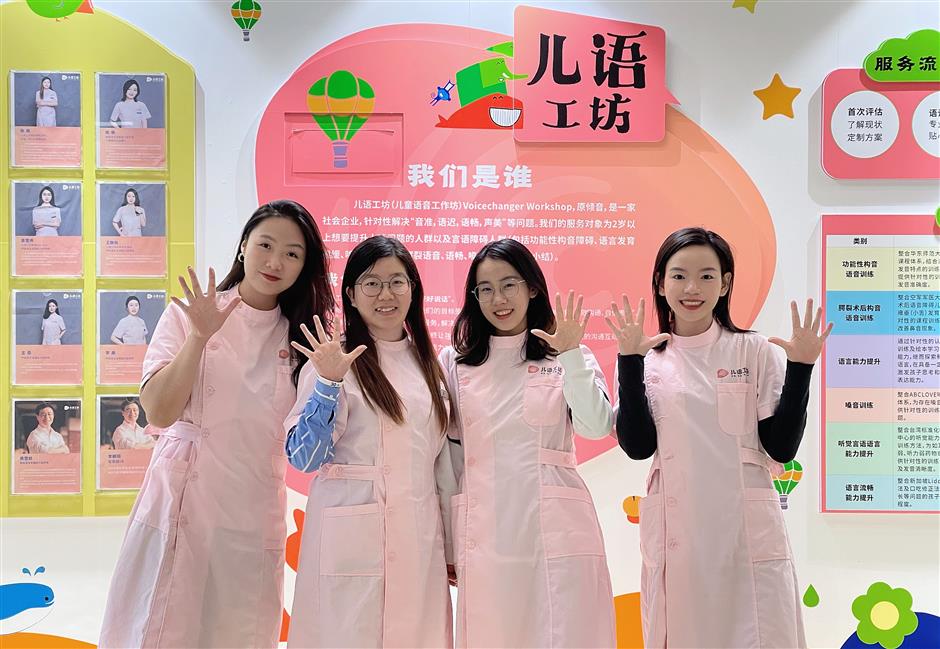 The idea for the institute came to Du while she was enrolled in social work in her sophomore year at Shaanxi University of Science and Technology, for which she visited hospitalized children.

Du said most children in the ward she visited were quite loud, except for just one girl, who was very quiet in her bed.

She tried to cheer her up but the girl seemed to be immersed in her own world. Du realized that the girl might suffer from some speech defect but, with great effort, could utter a few words.

Du tried to talk to her with pen and paper. The girl smiled and asked whether she would return the following day. Du assured her she would, lessening the girl's anxiety.

Since then, Du became deeply concerned about the speech-impaired. She and her social work classmates visited nearly every hospital in Xi'an to get to know their needs.

"We found that speech therapy was mostly administered by doctors and nurses who are not necessarily trained in that area. Also, many parents don't realize that their children need such therapy," Du said.

As she started to learn the ropes of a speech therapy, Du found a correlation between certain therapeutic techniques and elements of the art of broadcasting – such as intense focus on clear enunciation, which she had studied at her university. That inspired her to establish a speech therapy society on campus, for which she recruited broadcast students as part-time therapists.

"As we did our job, it became apparent that language trainers are greatly needed in the country," Du said. "Only around 10 universities offers majors in clinical or rehabilitating linguistics, whereas more than 600 have broadcasting majors. That's unbalanced." 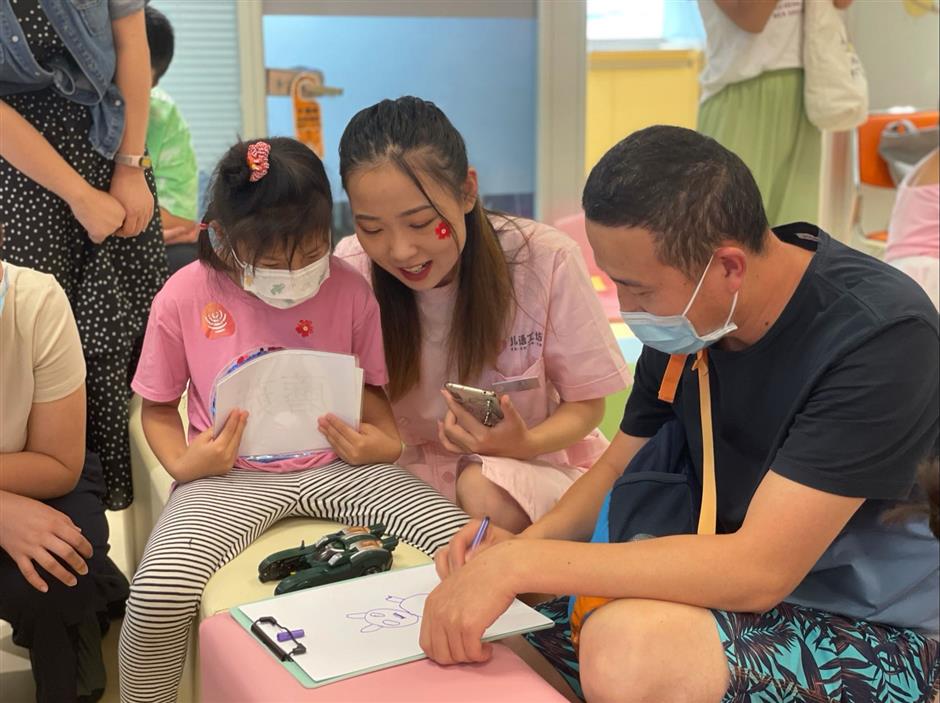 A therapist with Voice Changer gives speech training to a girl.

As there is no national standard for speech training in China, Du and her team have designed a curriculum specifically for therapists at Voice Changer, which she says assures a level of proficiency required to treat patients.

"China has only about 10,000 speech therapists, including part-time ones who have not received professional training; the number in the United States is around 190,000," Du said.

Being a qualified therapist means more than teaching people to speak. It also requires an understanding of psychology. Consider the case of a 3-year-old autistic boy. Therapists needed to find an entry point to his mind to arouse interest. After playing several games, they found that he responded well to the sound of running subway trains and the sight of road signs.

"It's not that autistic children are not interested in the outside world at all, but you need to find a better way to communicate with them," Du said.

Therapists found that the reason why the child couldn't speak was that he didn't know how to use his vocal cords, so they taught him to feel the organ by touching the front of his neck. After several sessions, the boy was able to say simple words, astonishing his parents.

Such success did not counteract difficulties Du and her team encountered. In the beginning, she couldn't decide if Voice Changer should be a commercial entity or a non-profit organization. She was worried that her institute may not be financially sustainable.

Several parents said they would be happy to spend money, provided the therapy was successful. Du decided that a commercial program with a non-profit touch might be the answer; there would normally be a fee, but families with economic difficulties could apply for Voice Changer's free courses that are sponsored by charity funds, such as the Chinanext Foundation.

Only half a year after the first branch of Voice Changer opened in Yangpu District, the COVID-19 pandemic hit the business hard. Some patients couldn't attend training sessions, yet rent and staff salaries still had to be paid. Du applied for zero-interest loans of 500,000 yuan (US$78,000) for temporary assistance.

Du said it has been a rough year or two, but things are looking brighter. Voice Changer's second branch opened in Putuo District a few months ago.

"We still need to promote speech therapy, and that's what I want to focus on," Du said. "I hope that patients can realize that there are scientific treatments available for many speech impairments – treatments which can change their lives in profound ways."

﻿
Special Reports
﻿
City offers incentives for migrant workers to stay put in city during holiday
Connecting with children via art therapy
Podcast: Art therapy may work 'like magic' on kids
Podcast: Chinese evangelist for the power of art therapy
Podcast: New era for art therapy education in China
Using art as a tool for meditation and healing
Therapists tune in to kids that are speech-impaired
Art intersecting with spirituality
Using art to help understand life and herself
Reaching people when nothing else works
EXPLORE SHINE