No touching! How coronavirus leads us to adopt a new lifestyle 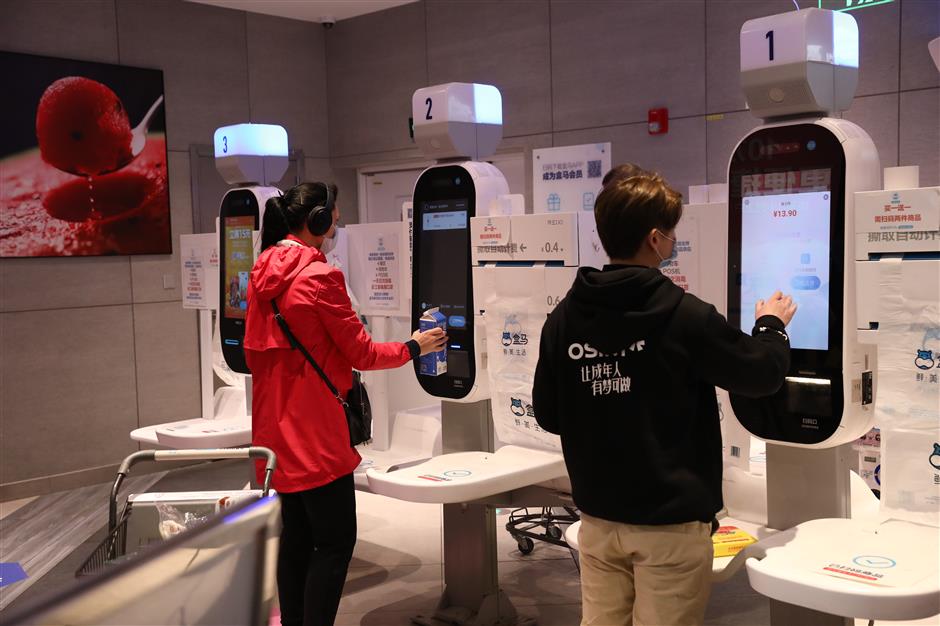 To many foreigners, the Chinese don’t seem very “touchy-feely.” They generally don’t hug and kiss acquaintances upon meeting, like the French, say.

What may seem like a degree of social aloofness actually has been a bonus during the coronavirus epidemic, when we are told to maintain distance from others. Taking that a step further, people are now increasingly operating in a “touchless” society that extends to buying habits.

Like using your mobile phone to place a breakfast order for the subway trip to work and picking it up at a Pick’n Go store without queuing. Fast, efficient and distanced.

Leishenshan hospital, one of the two rapidly built hospitals in the former virus epicenter of Wuhan, featured a nearby unmanned shop where medical staff could pick up a quick bite to eat without coming in contact with others.

Be it a Pick’n Go shop or the unmanned store at Leishenshan hospital, the stay-at-home and social-distancing imperatives of the coronavirus epidemic mean that more people are turning to what is nowadays called the “zero-touch economy.”

In the new-look retail, buyers and sellers conduct their business without personal contact.

Peng Wensheng, global chief economist of Everbright Securities, said the whole concept of the zero-touch economy as part of the digital economy has attracted “enormous” attention for its performance during the COVID-19 pandemic.

In the first quarter of the coronavirus outbreak, online retailing of physical goods increased 5.9 percent from a year earlier to 1.85 trillion yuan (US$260 billion), 25 percentage points higher than total retail sales, according to the National Bureau of Statistics.

This phenomenon actually began before the COVID-19 pandemic in China, thanks to the rise in the digital economy. Analysts say the trend is likely to flourish in the future.

The “digital economy” refers to commerce based on the Internet. It is also referred to as the Internet Economy, New Economy or Web Economy.

Increasingly, the digital economy is becoming intertwined with the traditional economy. It results from billions of everyday online connections among people, businesses, devices, data, and processes. It is based on the interconnectedness of people, organizations, and machines that results from the Internet, mobile technology and the Internet of Things.

Lin Zhe, chief executive of Sunmi, a technology provider to Pick’n Go, said in the retailing field, the zero-touch economy is more of a “self-help business model” where machine replaces man in some aspects. Efficiency and the consumer experience are both enhanced, he said.

Indeed, instead of going into a shop to buy a commodity or service, transactions can be done online. Delivery doesn’t have to mean personal contact.

That’s not to say that the rise of the zero-touch economy hasn’t created some concerns. The payment systems that accompany this business model, for example.

Self-help businesses rely on technology for payment. At first, that meant scanning QR codes. Then is evolved to facial scanning with the assistance of a smartphone. And today, even the phone is gone from the equation. A consumer need only stand in front of a facial-recognition payment machine to debit money from their Alipay accounts.

Facial-recognition scanning is now also used in railway stations and airports for checking in.

Although the zero-touch economy shows clear growth momentum, Everbright Securities’ Peng said questions linger about issues such as the protection of individual privacy.

Sunmi’s Lin Zhe said any new technology takes times to establish itself and be accepted.

“As for a face-scanning payment machine qualified for financial payment, it will not have safety problems,” he said. “Whether it is payment by face scanning or fingerprinting, the key is that these technologies all promote convenience of business and improved consumer experience.”

"One of the reasons why I like to shop in at the grocery site Freshippo is that don't need to wait in a long line at the checkout,” said one customer. “At Freshippo, there are self-payment options. It's very convenient to scan a code or do facial recognition to pay for groceries.”

Lao Li, a retiree, said, “I’m used to buying items at a local stores, even if it’s only a handful of spring onions or a bottle of soy sauce. I originally thought technological payment equipment was complicated to use, but I have found it relatively easy.”

Lin said the use of new digital payment systems will promote the integration of online and offline businesses.

The online economy, led by Alibaba’s digital sales platform Taobao, has grown rapidly in China, but it still accounts for only 20 percent of retail sales, but the percentage is expected to grow to two-thirds by 2023.

For now, conventional stores are still the shopping choice of the majority of consumers, allowing them to get “touchy-feely” with merchandise choices.

But data about consumer choices are lacking in most conventional stores. To help those businesses build up a better profile of shoppers, companies like Sunmi are adapting the Internet of Things to digitalize traditional stores and bring them real-time information of business transactions.

In that way, traditional stores can also move toward use of self-payment machines.

“It’s like turning a physical world into a digital world,” said Sunmi’s Lin. “That allows resources to be allocated more rationally and costs to be cut.”