Meet one of Shanghai's trash-sorting trailblazers 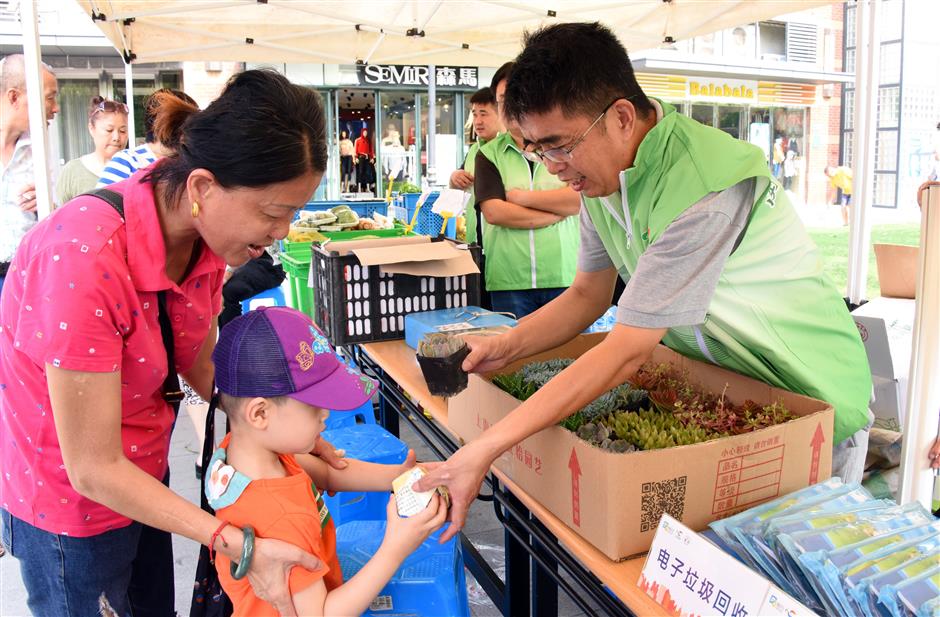 Niu Guangcheng (right) gives out gifts to passers-by during an activity to promote garbage sorting.

In Gumei Subdistrict, Minhang District, Niu Guangcheng is well-known, not because he's a celebrity, but because he's been a volunteer dedicated to promoting garbage sorting for 10 years.

Niu, 53, used to be a waste material collector. In 2009, his wife, his son and himself all suffered accidents, so he decided to seek stable work in the neighborhood. The neighborhood hired him as a waste collection coordinator under a program to help unemployed people find jobs.

The next year, the neighborhood became one of the first communities in the city to pilot garbage sorting, and Niu was selected as team leader to carry out the project thanks to his experience.

“It was not easy back then,” he said. “People, including myself, could not remember the classification rules clearly. Although we had trainings during which I managed to remember the rules, I forgot them again one or two days later. It happened to other residents in our community as well.”

An idea soon came to him. As residential complexes in the area were built up on sites of former villages and many of the residents were villagers who had raised pigs, Niu used the animal to help himself and others categorize garbage types.

“I told them that what can be eaten by pigs is kitchen waste; what pigs do not eat is dry waste; what will result in the death of pigs is hazardous waste; and what can be sold to buy more pigs is recyclable waste,” Niu said.

The definitions stuck, and were eventually spread online after Shanghai’s latest regulations on garbage sorting came into effect on July 1, 2019.

“I’m so proud that the definitions I created 10 years ago become popular now online,” he said. 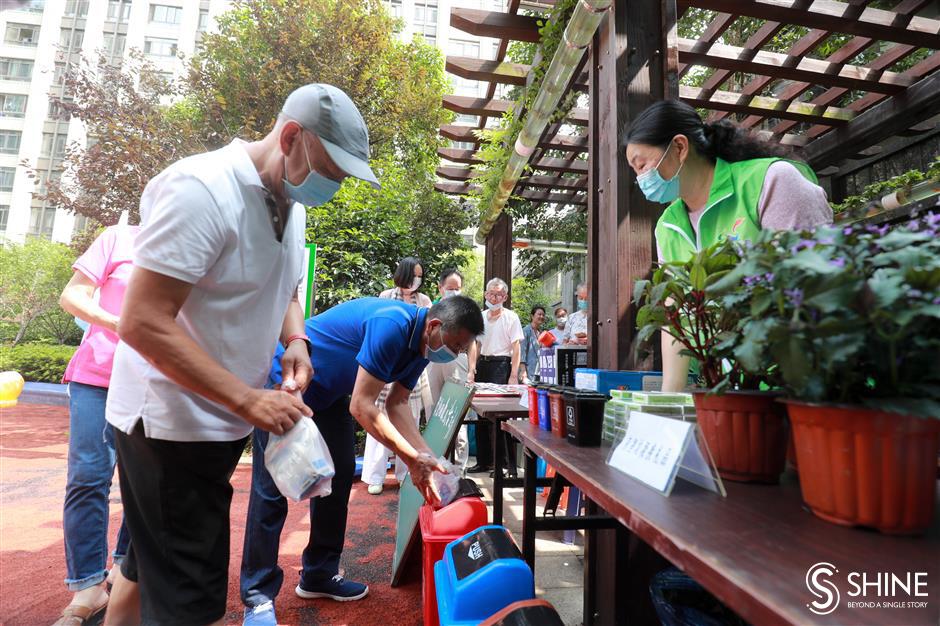 To promote residents’ awareness of garbage sorting, Niu spent his spare time organizing activities in residential complexes, encouraging residents to hand in hazardous waste — such as broken mercurial thermometers, expired medicines and used batteries — and rewarding them with gifts. He then transported the garbage to professional treatment facilities to handle the items without polluting the environment.

“I’m really thankful to Niu as he has made us realize that garbage is dirty, but it can also bring back beauty to our lives if we handle it correctly,” said a woman surnamed Liu, a resident at Wanyuan City complex in the neighborhood. Liu got a potted plant from Niu on Wednesday during an activity to mark the first anniversary of the city’s trash-sorting regulations.

Zhou Junmi, deputy Party secretary of Gumei Subdistrict, said: “Niu has been sorting and transporting hazardous waste in our neighborhood regularly for seven years and made us No. 1 in the area in the whole city.”

Niu has also designed a set of playing cards that became popular to promote garbage sorting in Shanghai. Each of the four suits on the cards represents one type of garbage, and there are names and illustrations of an object and the type of garbage classification it belongs to on every card. When playing with the cards, people can gradually remember the classification rules.

Together with his volunteer team, Niu has been cooperating with scientific research institutes and companies to design other products for environmental protection, such as solar-powered garbage bins, intelligent garbage bins that can scan faces and recognize fingerprints, and a circulating water system where fish and weeds coexist.

At the Wanyuan City complex, Shanghai Daily discovered the circulation system installed to decorate a pavilion. Fish are swimming in rain water collected in plastic pipes, where plants are planted. Niu said the system is self-sufficient, with solar power keeping the water running and the temperature stable, while fish faeces provides nutrition for the plants. 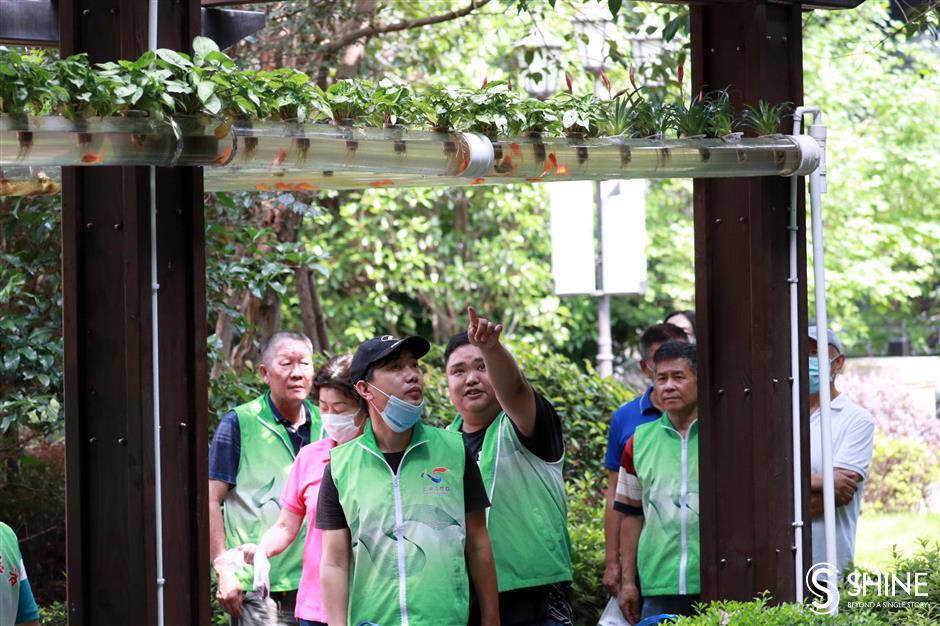 A fish-and-plant system is installed at Wanyuan City complex.

He has been collected old tires and transforming them into flower beds and play structures at kindergartens, communities and parks.

At Huamei Flower Garden complex, dozens of flower beds made from old tires have been put in places where garbage bins used to be.

“There are 20 sites where garbage bins were put previously, but after the new garbage-sorting regulations took effect in July last year, we removed bins from 18 sites and installed new ones at two according to the new standards,” said Liang Liqiang, Party secretary and director of the neighborhood committee. “The flower beds filled in those empty places and make the environment beautiful.”

“Shanghai produces about 20 million used tires a year. We have collected 160,000 since the beginning of last year,” said Niu. “We still have a lot to do to make the waste useful and turn Shanghai into a zero-waste city.”

Niu has also found value in leaves and twigs trimmed from plants and trees in communities, which used to be treated as dry waste. Now, he collects them as wet waste and turns them into fertilizers and fuel.

In the past 10 years, both Niu’s wife and son joined in his volunteer services, together with more than 100 members, including retirees.

In June 2019, Niu was honored one of the 100 most excellent environmental protection volunteers by the Ministry of Ecology and Environment. As a representative for Shanghai, he has far exceeded his job responsibilities.

At the beginning of 2020, during the outbreak of the novel coronavirus, Niu proactively organized volunteers to deliver supplies, make donations and provide volunteer service in the community. He participated in work actively, helping to carry frail elderly people up and downstairs and inspected markets for wild animal sales.

“I’m just doing what I think is good for everyone and I will keep doing that in the future,” said Niu. 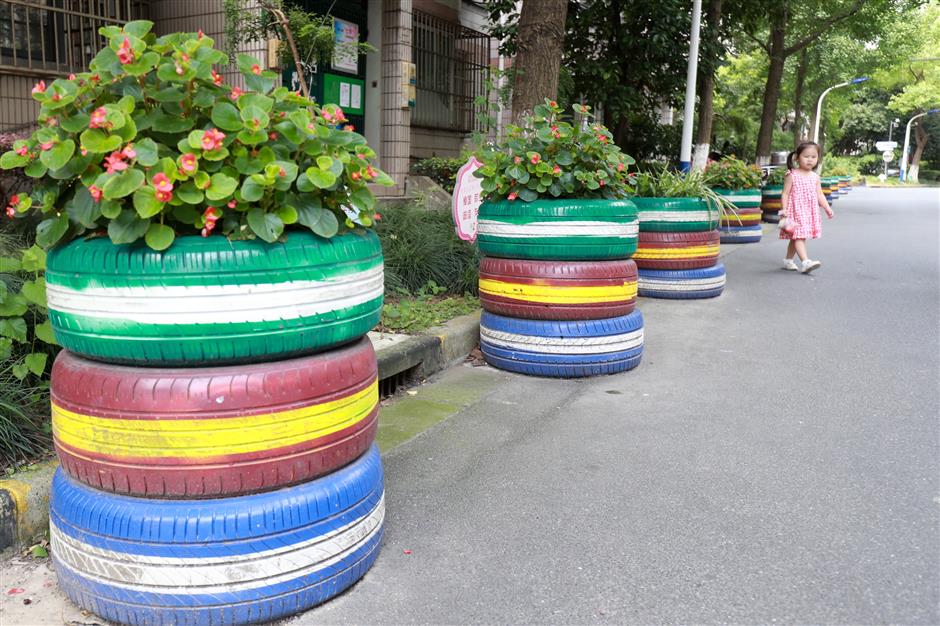 Used tires have been transformed into flower beds.