SHANGHAI’S STAR Market has more than lived up to its name, becoming the go-to place for science and technology companies in China.

The Nasdaq-style board celebrates its first anniversary today with many milestones to mark the year.

As of July 17, the board houses 130 companies with an aggregate market value of 2.9 trillion yuan (US$414.3 billion). That’s a big leap from the 25 companies that kicked off the board a year ago.

The board offers fewer restrictions on IPOs than other domestic stock markets, with a pilot registration system, unlimited valuations and eased trading rules. It has attracted companies involved in realms such as cloud computing, semiconductors, information technology and biomedicine.

“In the past year, the STAR Market and pilot registration system have withstood the test and generally met expectations,” said Li Gang, deputy director of the General Office of the China Securities Regulatory Commission. “It plays the role of a ‘test field’ for Chinese capital markets.”

More than half of companies on the board have doubled their share prices since listing, according to the Shanghai Stock Exchange and industry reports.

As a tribute to the first anniversary, China is officially launching the STAR 50 Index of top-listed firms.

As a measure of its success, the regulatory commission is also planning to adopt STAR’s IPO and trading rules for the ChiNext Board in Shenzhen, a board for startups that has more than 800 listed firms.

Despite the novel coronavirus outbreak that hobbled much the economy and markets, STAR Market drove IPO momentum this year.

In the first half, initial public offerings on STAR ranked first in number with 39 percent, and second in value, with 37 percent, among different boards on the A-share markets. According to a report by Ernst & Young, that momentum mainly reflected the strength of information technology companies during the coronavirus outbreak.

According to the report, four of the top 10 IPOs on A-share markets by value listed on STAR in the first half, raising 13.8 billion yuan.

The report was released before one big IPO and news of another this week.

On the same day, Alibaba’s financial and payment affiliate Ant Group announced it is taking steps toward a dual listing on the STAR Market and the Hong Kong bourse. It is expected to become the largest IPO this year.

Giant chipmaker Semiconductor Manufacturing International Corp (SMIC) listed on July 16, with its share price surging 202 percent on the first trading day. That makes it the biggest company by market value on STAR.

“The return of SMIC shows the flexibility and innovation of the domestic capital market, as well as its support for key core technological innovations,” Zhou Zixue, SMIC’s chairman, said during the listing ceremony.

SMIC raised 53.2 billion yuan in its initial public offering in Shanghai, more than double its initial target and a record high IPO value for all listings on domestic markets this year.

STAR is the first major board on the mainland to permit the listing of unprofitable companies. It may indeed nurture the “China Microsoft or Amazon” of the future, said analysts.

The concept is simple: If an unprofitable but innovative company is given access to capital, it can achieve its potential. One example is National Silicon Industry Group Co, a semiconductor materials provider, whose share price has jumped over 10-fold since its listing as an unprofitable company. The firm now has a market value of 110 billion yuan, ranking fifth on STAR.

For the market, regulators discarded unwritten caps on valuation and limits on first-day market movements. New listings in other markets in China face an informal price cap of 23 times earnings and a 44 percent ceiling for first-day share-price movements.

The regulator also allows STAR to list companies with dual-share structures, whereby a company can have more than one class of shares, each with different voting rights. It’s a way for founders to retain control over their companies.

Shanghai-based UCloud started trading on the STAR Market in January as the first dual-class structure company.

The firms in STAR are in high-technology industries involved in fields related to national strategy development, the Shanghai Stock Exchange said.

Of the currently listed firms, 20 are involved in electronics, 19 in software and information technology, and 17 in biomedicine and 15 in smart manufacturing.

Among the big beneficiaries is the biomedicine industry, where long research and testing times and huge investments are needed before turning a profit.

SMIC and National Silicon are not alone in showing skyrocketing share prices on the STAR Market.

In the past year, firms listed on the board jumped an average 197 percent from their initial public offering prices. More than 10 firms surged six-fold or more. They include online working tool provider Kingsoft Office and semiconductor equipment provider AMEC, which rank second and third, respectively, in market value on STAR.

The market has attracted many individual investors, even though access requires a trading account value of over 500,000 yuan, a relatively high threshold in China.

Many individual investors are out for “stag” profits — that is, cashing out shares bought in the initial subscription offer on the first day of trading. Given the skyrocketing prices that often occur, the profits can be considerable.

Tony Wu, an investor from the southwestern city of Chengdu, said he made more than 30,000 yuan from his online subscription to SMIC’s IPO. He locked in the profit by selling the shares on the first trading day last week.

Institutional investors also benefit from the development of STAR Market.

Some 41 securities firms, including China International Capital Corp, CSC Financial and CITIC Securities, were underwriters for the 130 listed firms on STAR. They are required to invest in the listed firms, a rule that has dealt them 13.9 billion yuan in profits through last Friday.

The new STAR 50 Index is expected to attract more investment and add liquidity to the market.

Several companies will launch tracking funds for the index, which could bring in even more investors because there will be no 500,000-yuan threshold for participation, according to media reports.

On the one-year anniversary, about 194 million shares of 25 STAR firms will be “unlocked,” involving a value of 217.5 billion yuan.

It may bring short-term capital pressure but it’s also a good opportunity for long-term capital to invest in the STAR Market, said analysts from Guosheng Securities and Northeast Securities. 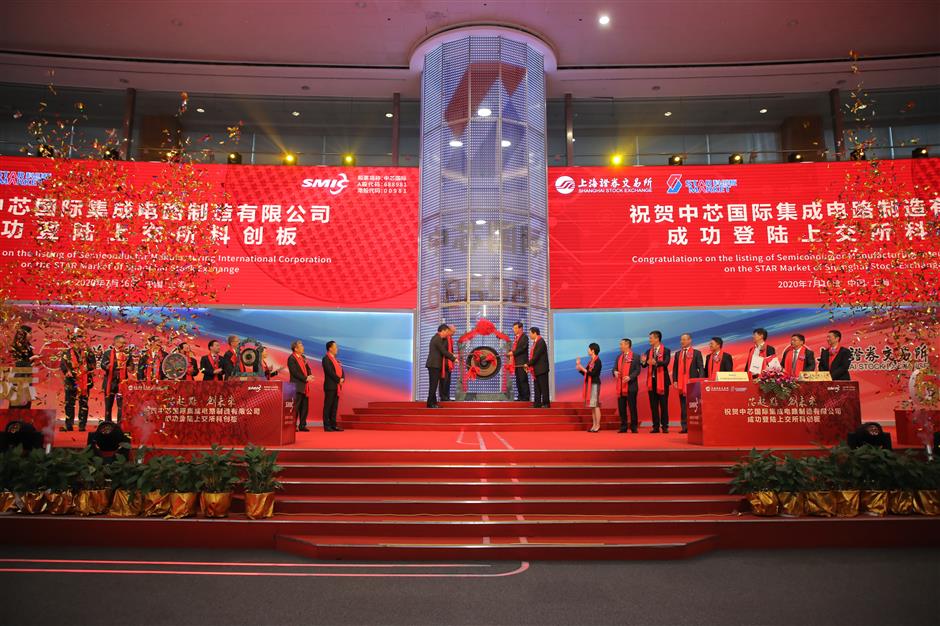 Chipmaker SMIC lists in the STAR Market with 202 percent surge in the first trading day, which made it the biggest STAR firm by market value. 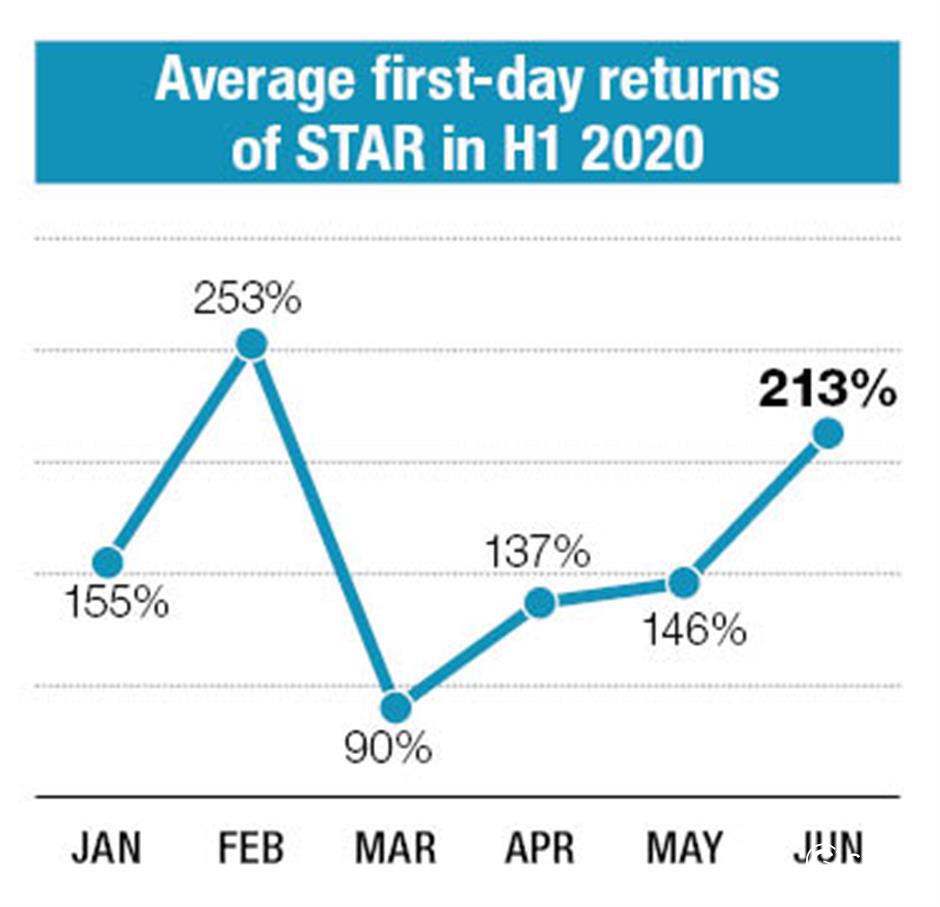 Special Reports
ADVERTISEMENT
61905
,
Classic Hangzhou fare wrapped in nostalgia
Honor releases first products since Huawei spinoff
Forum calls for more creativity to drive tech innovation
'Meet The Bund' for a Michelin star journey
Let an umbrella be your smile! A town with plenty to be happy about
Boys vs girls: It's hard to shake old ideas
Ever-evolving trends in cuisines and wines
How to tell opinion from fact: Do you live in a world of two realities?
Animal adoption as of January 24
Ordination terrace stands strong as a symbol of Buddhist faith
EXPLORE SHINE