The 'expressway' to employment dignity for the hearing-impaired

After being unemployed for more than a year, former graphic designer Xu Shengliang took a job as a deliveryman for Shanghai YTO Express (Logistics) Co. It suits him perfectly. Xu, 27, is a deaf-mute who speaks only through sign language.

The university graduate in computer systems said, through a sign-language interpreter, that he never felt comfortable at other jobs because his disability made it difficult to relate to other workers.

Xu found the delivery job through an organization called Wu Shen Kuai Di, which translates as “Our Voice Express” and has the same pronunciation in Chinese as “no sound.” It was founded by Gu Zhong, a sign-language news anchor on Dragon TV, whose parents are both hearing-impaired. 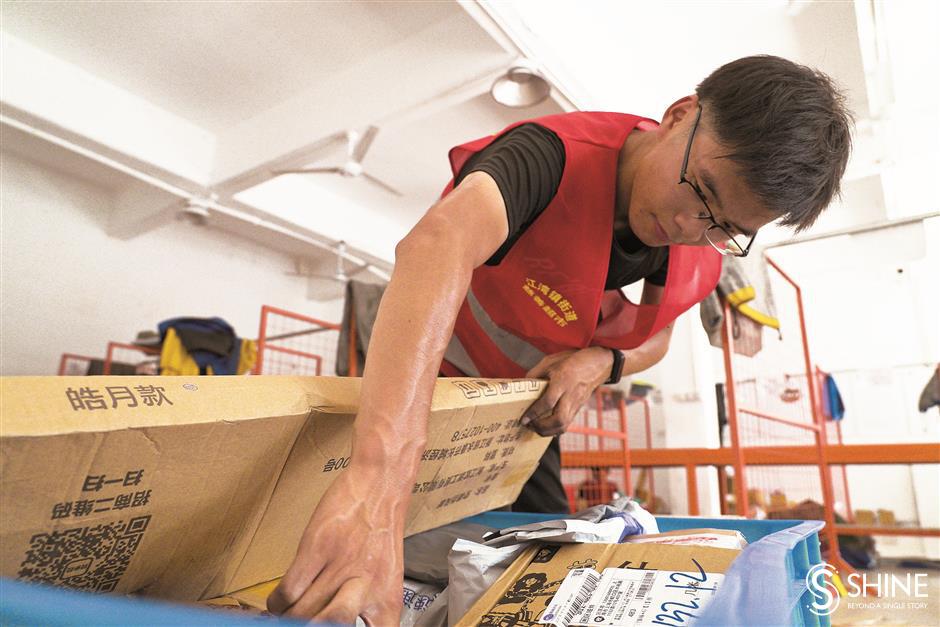 Xu Shengliang puts parcels into a basket before shifting them to his electric bicycle.

Jiang Zhiwu, a sign-language teacher at Our Voice Express, said Xu told him he is pleased that the organization doesn’t treat him differently from anyone else.

“When he was working elsewhere, some people couldn’t understand and accept him, so he didn’t stay long in jobs,” Jiang explained.

At noon on a Wednesday, Xu rides his electric bicycle to the YTO Express office on Liangcheng Road in Hongkou District. He is just returning from delivering more than 100 parcels to areas between Shuidian Road in Hongkou and Wanrong Road in Jing’an.

After a brief rest at the office, he sets out again. He carries a recording made by colleagues to present to gate security guards. It tells them he is a hearing-impaired deliveryman who can’t speak.

He goes to the third floor of an apartment building and rings the bell to deliver a package to a woman named Tan Qiudan. She smiles in recognition and nods her thanks.

“I found out that Xu was a deaf-mute when he tried to deliver a parcel to my home when I was out,” Tan told Shanghai Daily. “I called his number but he hung up the phone. A few minutes later, I got a message from him, telling me that he can’t hear or speak. I was surprised because I had never met such a deliveryman.”

Tan thinks highly of the organization that helps Xu and others like him gain meaningful employment and said she is happy with the service.

At about 2:30pm, two YTO Express vans filled with parcels arrives at the office. Xu helps with the unloading and sorting.

There are eight Our Voice Express deliverymen working in this office. Another 30-plus work at three other YTO Express offices in the city.

Gathering up all the parcels he is to deliver, Xu uses a felt marker to write the addresses on each parcel in larger font to ensure he won’t deliver them to the wrong places. 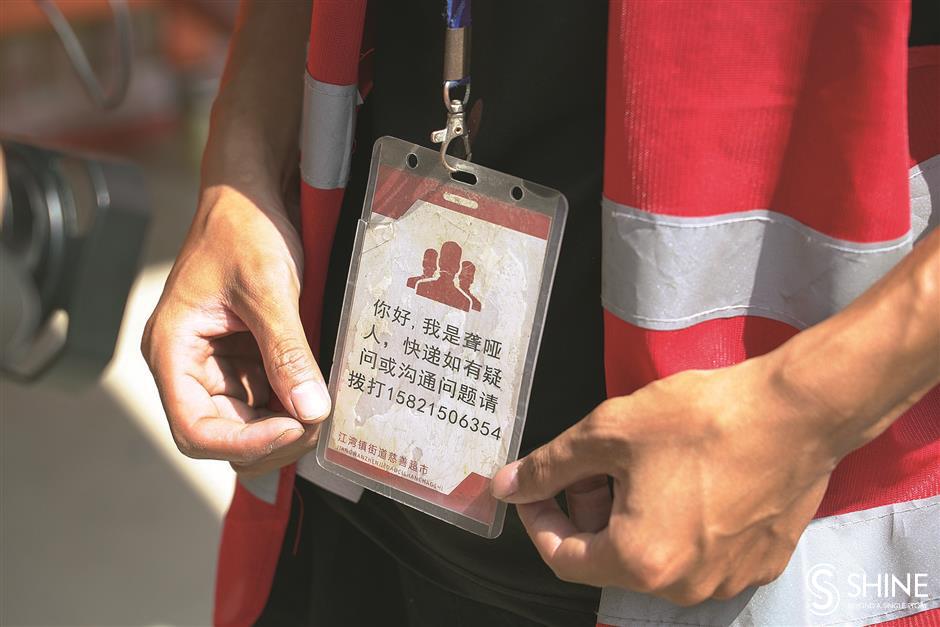 Deaf-mute deliverymen wear neck tags explaining their disability and giving customers a number to call in case of problems.

Jiang said Xu was trained to leave a parcel only after the acknowledgement of the recipient.

In his early days on the job, Xu was able to deliver only a limited number of parcels in a day. Now he sometimes delivers up to 300.

Xu starts work at 6:30am and usually clocks off about 12 hours later. But if the workload is heavy, he may work until 8pm.

The Heart Workshop founded by Gu runs a charity grocery, which sells goods at lower prices and delivers them to the needy.

Cai Lu, a clerk at the grocery, said she fields orders from customers and uses WeChat to communicate with hearing-impaired deliverymen.

“At the very beginning,” she said, “there were lots of problems and we were always on the phone. But now it’s smoothed out. Except for newcomers who still need more practice, our experienced deliverymen rarely have problems.”

Founder Gu told Shanghai Daily that the idea of launching a delivery team of hearing-impaired people first came to him when the charity grocery encountered a problem during the coronavirus pandemic.

With fewer customers coming to the grocery, online orders rapidly increased. Hiring hearing-impaired people as deliverymen resolved both that problem and addressed the issue of unemployment among the disabled.

Gu posted recruitment information on his WeChat account, and word spread through the hearing-impaired community. The team grew from just a handful of deliverymen to more than 40.

Many of the deliverymen have come from other provinces of China.

Gu’s efforts were given a big boost by support from YTO. The company makes no distinction between disabled and non-disabled staff in terms of pay or responsibilities.

“It’s important for the disabled to get a fair go at jobs,” Gu said. “I discovered that in some cases, the hearing-impaired were receiving only half the normal pay and were simply too intimidated to complain. Shanghai encompasses many different groups of people, and we should have a fair, transparent work environment for them all. That’s what drove me to start these projects.” 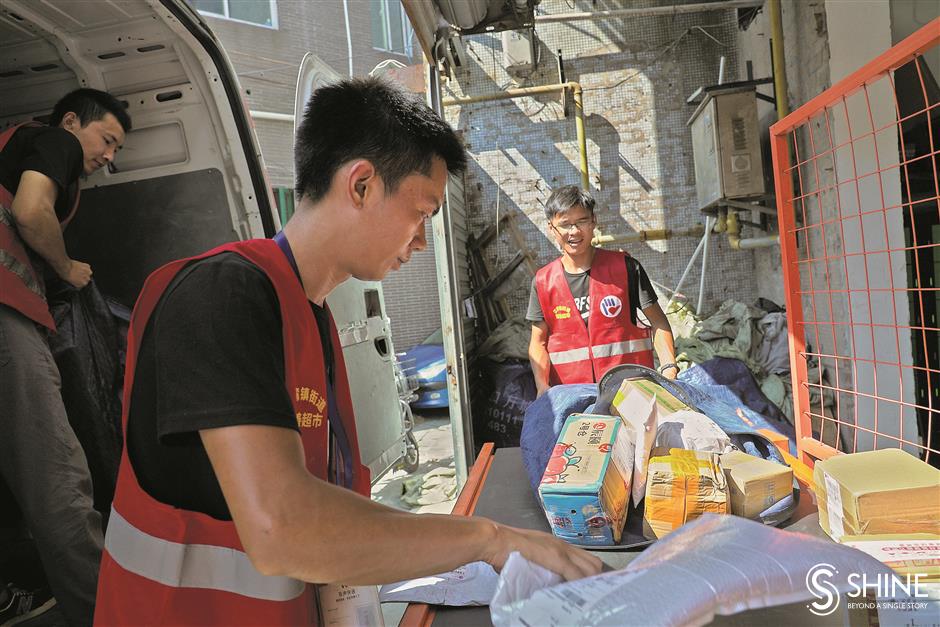 Xu (right) and another hearing-impaired deliveryman unload parcels from a YTO Express van.

Gu said there were teething problems.

“Deaf deliverymen sometimes would knock too loudly on doors or ring the bell too incessantly because they couldn’t hear what they were doing,” Gu explained. “That annoyed or even frightened some residents.”

Then there were problems training the deliverymen how to get around Shanghai, especially if they were from outside the city and unfamiliar with streets.

“Some new deliverymen didn’t sort their parcels so that they could deliver to all the addresses in the same building at the same time,” he said. “They wasted a lot of time going from one place to another, and then back again.”

Gu and Jiang, who serve as their trainers, were patient in teaching the deliverymen how to work smoothly and efficiently.

“We also receive some malicious complaints,” Gu admitted. “One customer insisted he hadn’t received a parcel when he actually had. He threatened to call the police, but later admitted he had wronged the deliveryman.”

Many parcel recipients are much kinder. They often give deliverymen a cool drink on a hot day, or a piece of watermelon. And sympathetic security guards at residential communities often lend them hand if necessary.

“Hiring 300 deliverymen and expanding our services to the whole of Putuo District are the focus for the rest of this year,” he said.

The team is also gearing up for the big Singles’ Day shopping extravaganza in November, the busiest parcel-delivery time of the year.