Honorary citizen, corporate titan and a man with a heart of gold 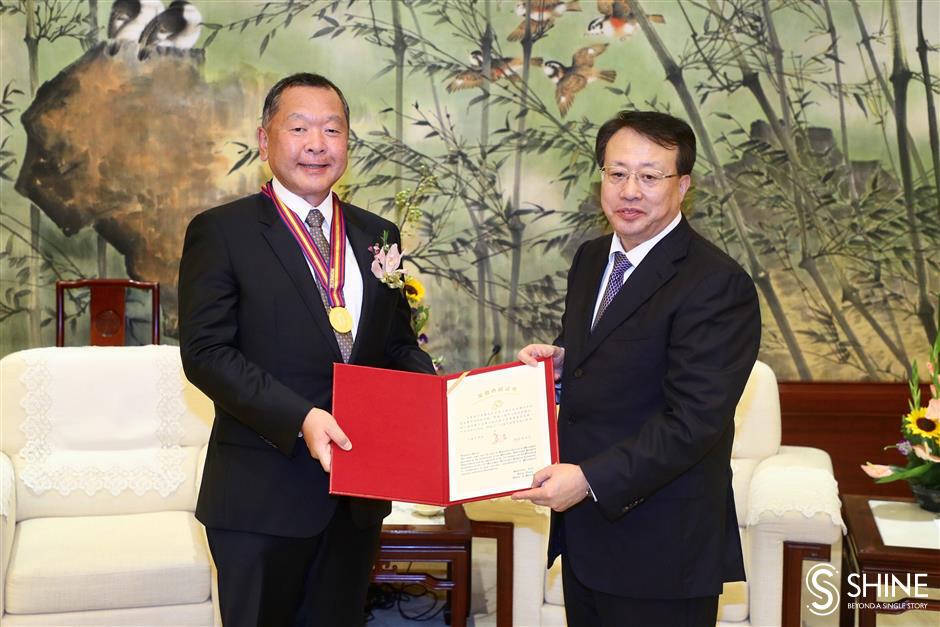 Hirai, 59, is an executive vice president of Mitsubishi Corporation and its regional chief executive for China. He said Shanghai was an important place for Japanese industrialists as they sought development after the Meiji Restoration.

“At that time, many Japanese students wished to study in Western countries,” he said. “But Shanghai was also a popular option because they could learn not only Chinese culture but also Western culture here. There were already many Western scholars and scientists in Shanghai.”

Hirai first came to Shanghai in 1987 when his company sent him to China. He first learned Mandarin at Peking University in Beijing.

“When I arrived here, I could feel the vitality of the city, the hustle and bustle, and the prosperity of the Bund,” he said.

In the past 33 years, he said he has witnessed the great changes in Shanghai along with changes within Mitsubishi.

“When I first came to China, our head office was in Beijing,” he said. “But as Shanghai began to play an increasingly important role in the opening up of the country, we moved the head office to Shanghai in 1995.

More Japanese companies invested in the city in the 1990s. Hirai said early on his company began to turn its attention to the Yangtze River Delta region for investment.

By the end of last year, more than 700 transnational companies had set up regional headquarters in Shanghai.

Hirai said Shanghai attracts so much foreign investment because it is a pragmatic city and the municipal government is always working to solve the real problems faced by foreign companies.

“Internationalism, market vitality and government support are the three most important cornerstones for business development,” he said. “I think the volume of foreign investment here is a testament to the business environment in Shanghai.”

Shanghai, he noted, has taken a leadership role in piloting national strategies, such as the city’s free trade zone, which he believes will bring more positive changes.

“When I first came to Shanghai and stood on the eighth floor of the Peace Hotel, I never could have imagined the Pudong New Area would turn into what it is now,” he said. “The free trade zone is another such work in progress.” 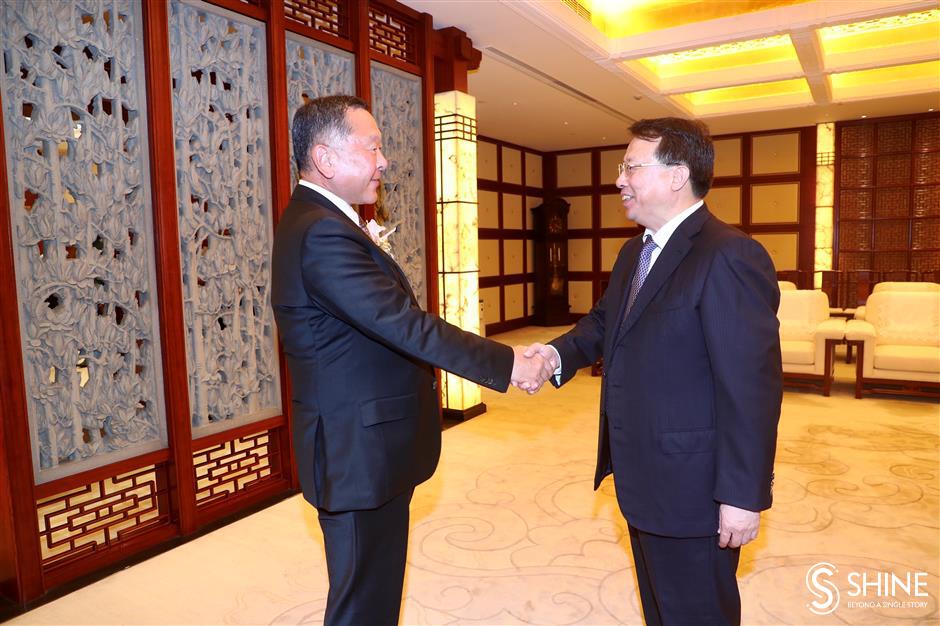 He has been dedicated to promoting Sino-Japanese economic and trade ties. In 2014, when the Japan External Trade Organization decided to close down the two-year-old Shanghai Center for Japanese Commodities, Mitsubishi China took it over and has been running it ever since. It organizes exhibitions of Japanese products and hosts regular trade talks.

“In running the center, we don’t make any profit, but I decided to keep it running because it can serve social needs,” he said. “There are a lot of Shanghai residents who are interested in Japanese products.”

He has also been helping Japanese companies participate in the upcoming China International Import Expo. During expo in November, Hirai said the center will launch a program to organize livestreaming events to showcase Japanese products all year round.

He has also been active in promoting Shanghai in the international community.

He served as an assistant to former Japanese Prime Minister Yasuo Fukuda at the Boao Forum for Asia and has introduced Shanghai’s social and economic developments, future prospects and policies to government officials and corporate executives from other countries.

In September 2015, he led Mitsubishi Corporation (Shanghai) Ltd, a company registered in the Shanghai’s free trade zone, to participate in the World Expo in Milan and has helped promote China’s “Belt and Road” initiative.

He is also dedicated in promoting green-industry development in the city. In May 2014, he was invited to become vice director of a low-carbon committee of the Shanghai Services Federation, introducing Mitsubishi Corp’s technologies, expertise and ideas in environmental protection.

In 2015, Hirai and his colleagues led two delegations to the San Francisco Bay Area and to Silicon Valley in the US, and later helped delegations from that region to visit the Zhangjiang High-Tech Zone in Shanghai.

Hirai is also active in charity activities. In March last year, when he attended an activity for Japanese winners of Shanghai’s Magnolia Awards, he watched a performance hosted by Angel Music Salon – a program launched by the Shanghai Charity Foundation and the Cao Peng Music Center to help autistic children and their families.

“It was cold that day, but I was warmed by seeing autistic children serve us coffee and perform the symphony for us,” he said. “I talked with the parents, who put on brave smiles but have suffered a lot. At that time, I realized that there is still not enough understanding and help for them.”

Under his leadership, Mitsubishi Corporation China is donating to the salon each year. Last year, it sponsored the group in staging a concert in September to celebrate the 30th anniversary of the Shanghai Magnolia Awards. 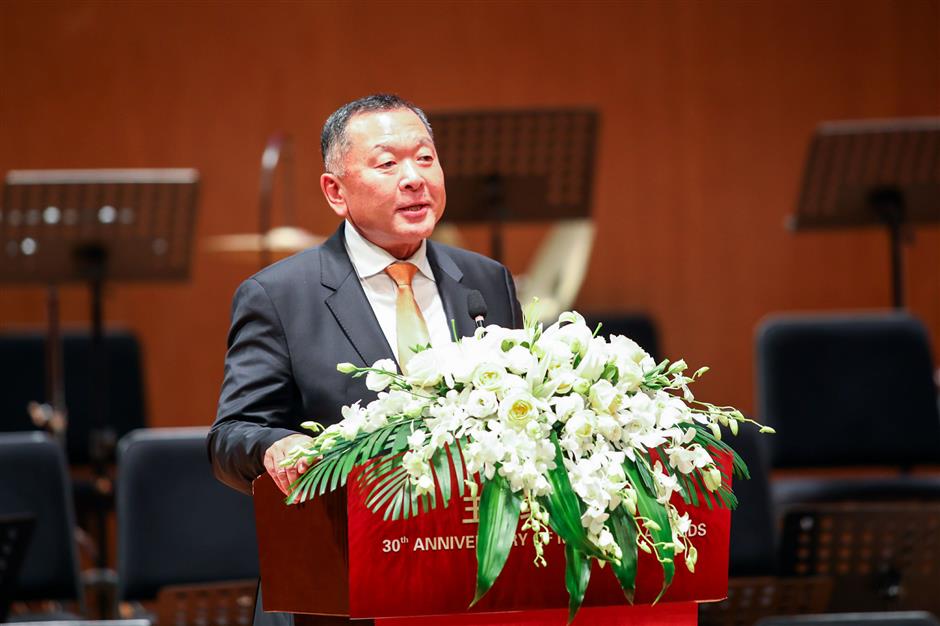 Yasuteru Hirai at the concert celebrating the 30th anniversary of the Shanghai Magnolia Awards last year.

Also under his efforts, Mitsubishi Corporation (Shanghai) Ltd has been sponsoring exchanges between students from Fudan, Shanghai Jiao Tong and Tongji universities in Shanghai and their counterparts from Seikei University in Japan. It also sponsors a study tour program in Japan for students from Shanghai International Studies University.

When the COVID-19 pandemic broke out, Hirai was in Japan for the Spring Festival break. He took advantage of Mitsubishi Corp’s global trade network to donate more than 200,000 masks to China.

“I was touched to see Japanese and Chinese people helping each other in fighting the pandemic,” he said. “The Japanese donated masks and other resources to China first, and later China made donations to Japan in return. We all know that it’s a challenge for the whole world, and we need to fight it hand in hand.”

Hirai returned to Shanghai in April and served the requisite 14 days of quarantine in a designated hotel. He praised Shanghai for its rapid and effective measures to bring the pandemic under control.

“Shanghai has done a great job in fighting the pandemic,” he said.

He said the honorary citizenship came as a surprise to him.

“It’s a recognition for my previous work, and it also serves to remind me of the continuing mission to promote economic and social exchanges between our two countries,” he said.