An overall plan to develop the Hongqiao International Hub for Opening Up was recently approved by the State Council.

The guideline submitted by the National Development and Reform Commission clarified targets and supportive policies, positioning Hongqiao to become an important growth engine for regional economic development by 2022 and an international open hub by 2025.

According to the plan, Hongqiao will become an international urban area as well as an open hub with improved ecology that will enhance the integrated development of the Yangtze River Delta region.

The Shanghai government pledged to implement the plan, and extracted 83 specific tasks in five aspects related to the city from the guideline.

Highlights of the Hongqiao International Hub for Opening Up

In five years, the Hongqiao central business district and new platforms for the Hongqiao international trade center will see the functional framework and systems fully established.

The level of integrated traffic management in Hongqiao will be significantly improved by 2025, and the area will play a bigger role in serving the Yangtze River Delta and connecting with the world, according to the city’s development and reform commission.

By 2035, the fully developed Hongqiao International Hub for Opening Up will serve as an important carrier to promote the integrated development of the Yangtze River Delta, enhance China’s opening-up level and strengthen the advantages of international competition and cooperation.

The city will also promote the international, professional and branded development of the exhibition economy.

Targeting other fields such as air service, Hongqiao will accelerate the construction of featured areas to become a modern service industry cluster.

Another highlight is that pilot reforms for international talent management will be launched in the Hongqiao CBD to provide visa, residence and permanent residence facilities for overseas high-level professional service talent, encouraging foreign professionals to have careers and conduct academic exchanges in China.

Pilot programs will also be launched in the area to set up schools for the children of migrant workers throughout the country.

For multinational enterprises, Shanghai will support eligible corporations in their cross-border capital operations and management.

Foreign companies are also allowed to invest in the construction of cultural venues such as theaters, cinemas and concert halls. 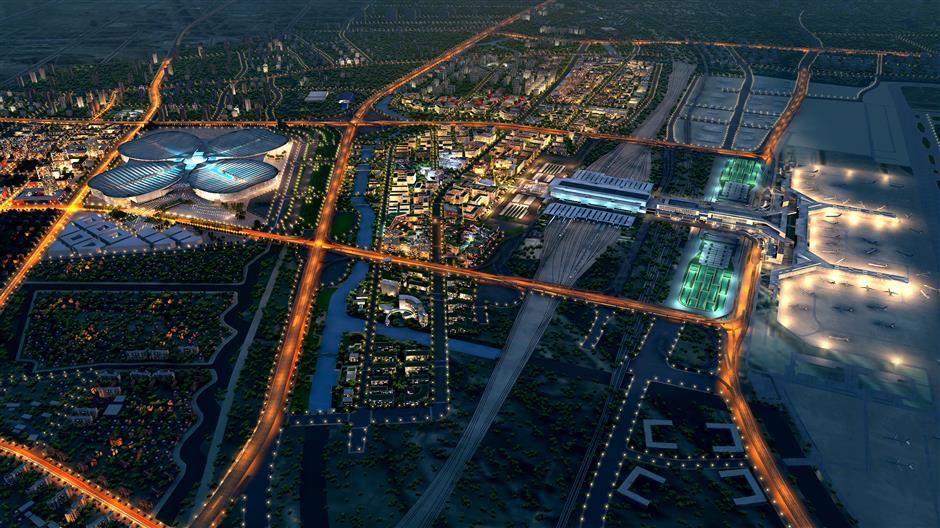 An overall plan to develop the Hongqiao International Hub for Opening Up was recently approved by the State Council.

Authorities to carry out measures in accordance with the plan

Concerted action will be taken by authorities of several districts in the Hongqiao area.

In keeping with the overall plan, the Hongqiao Central Business District Administrative Committee pledged to carry out the measures and place emphasis on key tasks.

It will upgrade industry and build a first-class international CBD, focusing on the development of modern high-end service sectors such as the business exhibition industry.

The committee also highlighted the China International Import Expo, pledging to expand the spillover effect of the trade show to create a high-quality innovative demonstration zone to promote national imports.

It also aims to establish a new integrated transportation portal connecting China to the world. Efforts will be made to build a transport infrastructure and improve the core functions of Hongqiao’s comprehensive transport hub.

New channels for the efficient allocation of global high-end resources and factors will also be created.

Minhang District authorities will place emphasis on its core business area, where more than 6,400 enterprises and 180 headquarters-type institutions were registered as of January.

Companies in Hongqiao look to future benefits from the plan

Companies located in Hongqiao shared their experiences of doing business in the area, expectations on future development after the guidelines take effect and their plans for growth over the next several years.

"Capitalizing on the strategic advantages brought about by the development of Hongqiao, we can leverage advantages in technology and management in the domestic market," said an official from online travel company Trip.com, which is headquartered in the area.

The company hopes to be Asia’s largest international tourism enterprise in three years and the world’s largest within five years.

Multinational consumer goods company Unilever, which was among the first foreign companies to enter China after it opened up, set up its China headquarters and research and development center in the Hongqiao CBD with nearly 2,000 employees.

In addition to Shanghai, the company has expanded its sights on the greater Yangtze River Delta region.

"We have established production bases in Jinshan in Shanghai, Taicang in Jiangsu, Ningbo in Zhejiang and Hefei in Anhui, committed to be a pioneer in the advanced manufacturing industry in the Yangtze River Delta and leading the coordinated development of the Delta region," an official with Unilever said.

The Greenland Global Commodity Trading Hub Group said that it will make full use of the industrial and geographical advantages of being within the Hongqiao CBD to seize new opportunities, while building a new platform for international trade and distribution center for import commodities.

"The new policies supporting open hub construction will help promote regional international trade and the upgrading of related industries," said Lin Ying, deputy general manager of the group's project management center. "They will also accelerate the gathering of overseas resources in the form of industrial and supply chains, which can help us introduce advanced products from international markets, and encourage more foreign enterprises, including CIIE exhibitors, to settle in Hongqiao."

As a platform offering trading services for import commodities including CIIE exhibits, it has attracted 176 businesses from 70 countries and regions, including 46 national pavilions.

It aims to open 70 national pavilions before the opening of the fourth expo.