Is beauty to be found in 'ugly' attractions? 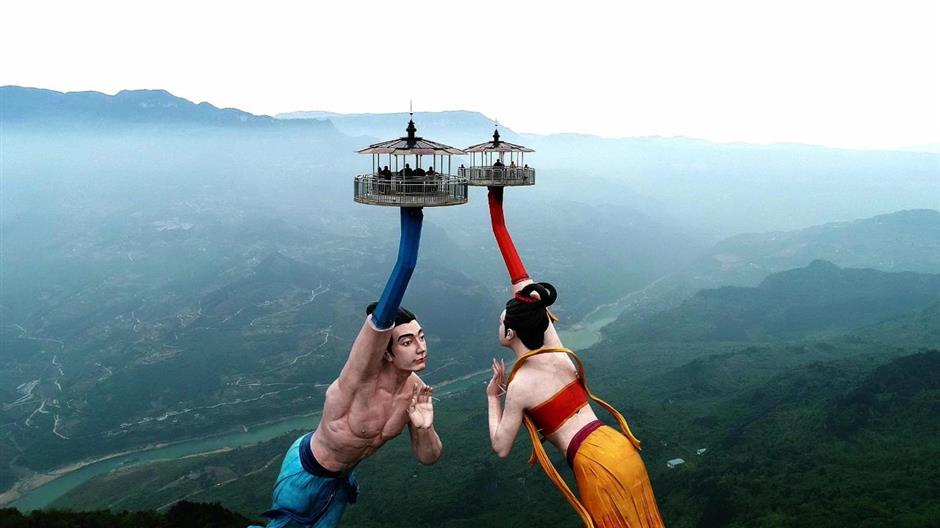 The “Chongqing Wulong Flying Kiss” ranks third on the list of China’s top 10 ugliest structures in 2020 by Archcy.com.

We have a natural abhorrence of ugliness — but what if this ugliness creates a buzz on social media, draws a crowd, and becomes profitable?

According to recent reports, some astute tourist managers are turning some of their controversial ugly constructs into cash cows.

The question is whether this pilgrimage to trashy icons can be sustainable. Might disenchanted visitors give up the eye-sores in disgust, muttering: “Is this what I have come to after all this travel?”

The list of China’s top 10 ugliest structures in 2020 was released by Archcy.com, an architecture-related website based in Beijing. Finalists have gone through two rounds of selection, a preselection by online vote, followed by the deliberation of a panel of seven architects.

The “Chongqing Wulong Flying Kiss,” which has gone viral and been roasted as an “eyesore” since it was unveiled last July, is on the list.

Zhang Qi recently availed herself of the opportunity of a business trip to the southwest China city to pay a visit to the notorious “Sky Kiss,” according to Southern Metropolis Weekly. In this gigantic installation, a Prince Charming and a Chinese nymph, as they gyrate and are steadily elevated, approach each other and synchronize a monumental kiss, at more than 1 kilometer above the valley floor — quite a feat. But when Zhang saw the installation with her own eyes, she was overwhelmed by its enormity and its utter destitution of any sense of beauty.

For all the negative comments this flying kiss has drawn, it has become an online sensation, sustaining a steady influx of visitors. On the day Zhang visited, she had to queue for half an hour to get in, even though it was not a holiday. 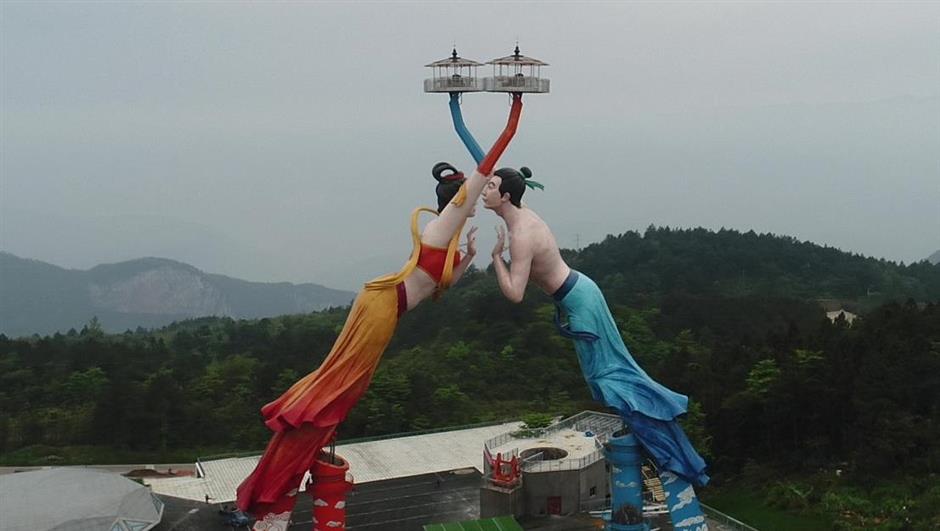 Some managers of these unsightly sights place such a premium on their potential revenue that they seem to believe that prestige, aesthetic value and services can all take a back seat.

Zhang believes sensational tourist sights that gamble on their ugliness, low taste, or weirdness won’t last long. After her visit, she posted negative comments on WeChat to warn her relatives and friends.

Opinions of people on the street suggest responses tend to be mixed.

Some said that if they heard about the sights, they would pay the obligatory visit. Others said they would avoid such sights, preferring instead those with a reputation as aesthetically sophisticated and substantial.

Some took a more permissive view, with one saying: “I know some sites today are ugly and lack taste, and you can judge at one glance that they have been churned out at very limited cost. Conversely, if they aren’t misleading or disruptive in terms of ideology or cultural values, and if they happen not to be illicit buildings, it’s no big deal. Anyway, in a sense, aesthetics are a matter of personal discretion. Who knows? What I view as ugly might be considered cutting-edge by others.” 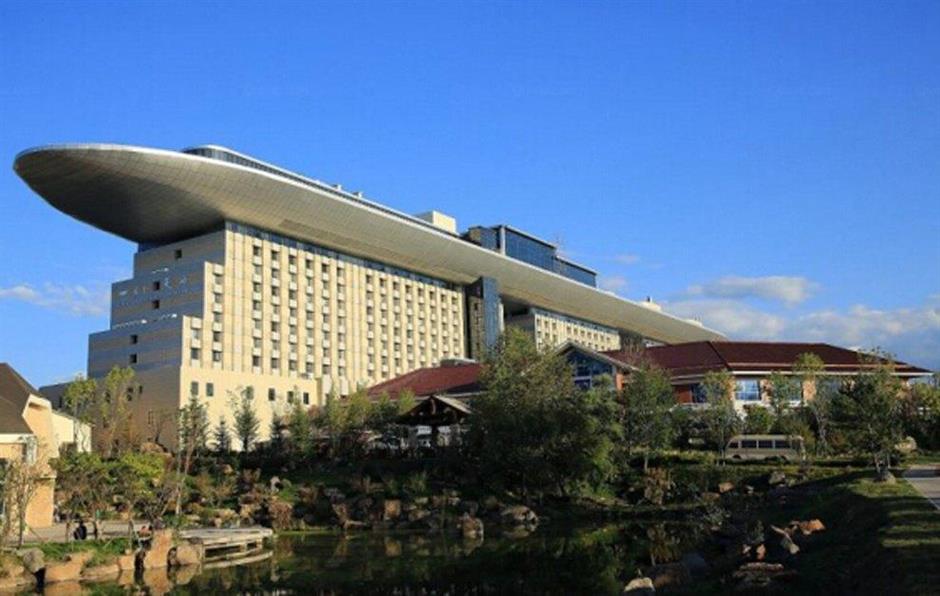 People engaged in the art or tourist sectors are advocating for greater regulation.

Zhang Sha, who has been engaged in the tourism industry for years, is concerned about the detrimental impact of some trashy sights which have acquired celebrity status.

She said that the herd mentality, by promoting visits to such sites, might distort people’s perception of what is beautiful, particularly impacting the cultivation of aesthetics for the younger generation.

“Although there are no standards for beauty, we do have some consensus about it. For instance, they are generally things evocative of feelings of harmony, ease, relaxation and pleasure.”

Commenting on the “Sky Kiss,” journalist Dong Langhang was unrelenting: “We need not delve deeply into the philosophy (if any) behind this creation. It is obviously informed by an eagerness to play to the gallery. It is wanting in taste, poorly executed, an insult to Chinese mythology, and totally out of tune with its surroundings.” 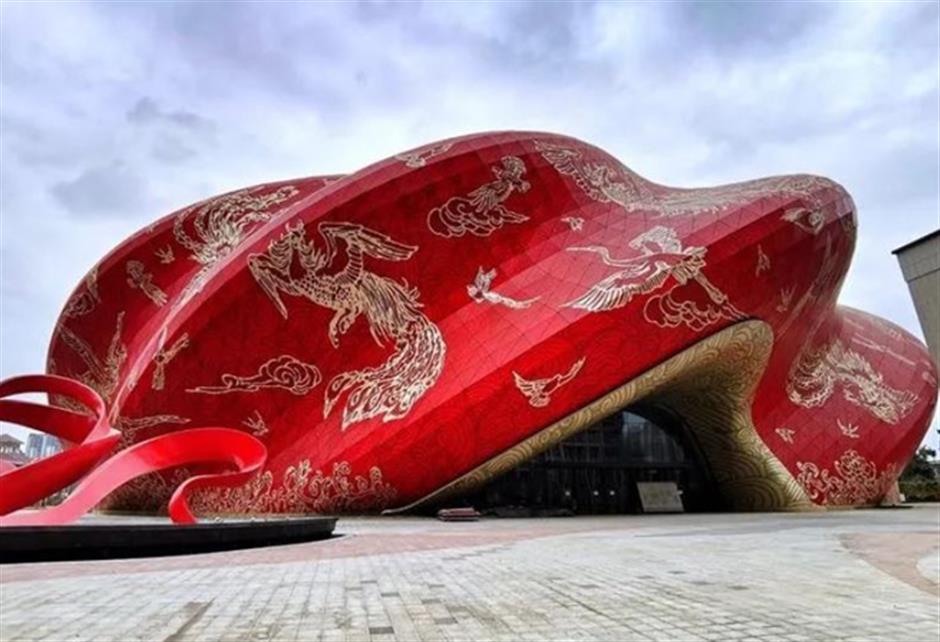 Surprisingly, the “Flying Kiss” did not make it to the top of the ugly list. It had to make do with third place, with top place going to the Guangzhou Sunac Grand Theater, described variously online as “a flowery quilt,” “an embroidered shoe,” or “a well-stewed squid.”

Designed by London-based Steven Chilton Architects, this grand building was reportedly inspired by a piece of renowned artist Zhang Hongfei’s embroidery, with the red flame exterior signifying Chinese culture, as well as auspices, bliss and happiness.

In giving this structure pride of place, the panelists cited the structure’s “far-fetched conception, hastily embedded Chinese elements and physical grotesqueness that are injurious to the city’s image.”

Contrary to some beliefs, some of these edifices are very expensive.

In Linfen, Shanxi Province, no fewer than 360 star-rated public toilets have cropped up in recent years modeled variously on the Forbidden City, the Bird’s Nest, castles or libraries, providing tourists at home and abroad a perfect photo opportunity and earning the city the appellation “capital of toilets” and no less than two awards at a global toilet summit. Managing these facilities costs 3 million yuan (US$460,000) annually.

The “Sky Kiss” sculpture has a price tag of 100 million yuan.

In Jingzhou, Hubei Province, 1.5 billion yuan was used to construct a park dedicated to Guan Yu, a legendary general from 1,800 years ago. In November last year, following media exposure, the local authority decided to have the sculpture removed, at a cost of 40 million yuan.

Zhou Rong, an associate professor at Tsinghua University, said that as the public’s taste for architectural values becomes more nuanced, the number of trashy architectures that amount to a crass celebration of wealth and grandeur is decreasing. “But a new problem has emerged, and that is capital’s unscrupulous encroachment upon public space.”

Zhang Sha, the tourism industry insider, proposed that in the future tourist projects should be first submitted to cultural experts for scrutiny, followed by strict budgetary controls.