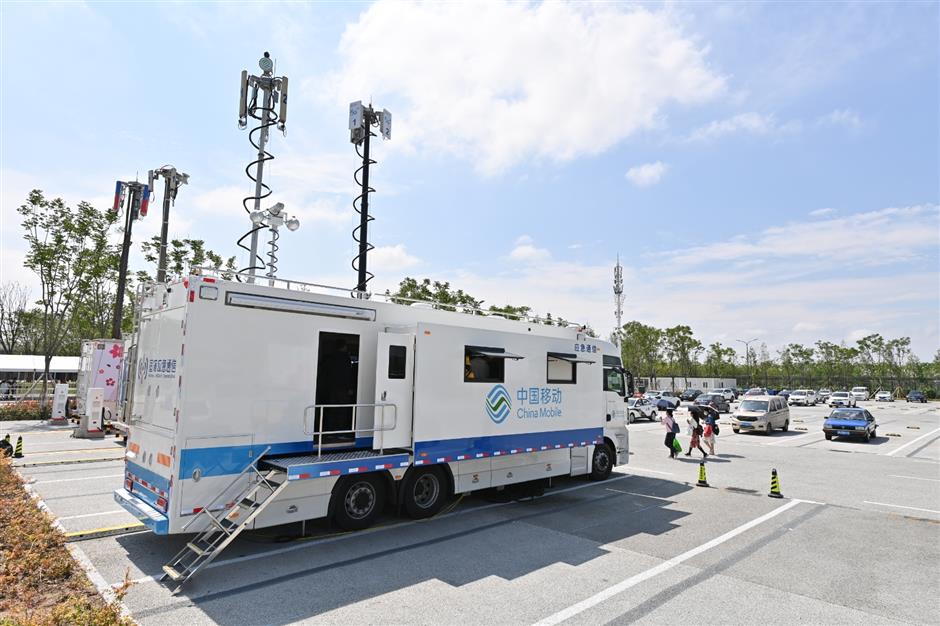 The three heavyweight carriers of China telecommunications – China Mobile, China Telecom and China Unicom – are headed for a "reunion" in Shanghai after they were delisted from the New York Stock Exchange.

China Mobile, the world's biggest mobile carrier by subscribers, announced last month that it will seek an initial public offering in Shanghai, reportedly to raise about 50 billion yuan (US$7.7 billion). The carrier, which has 940 million phone and broadband subscribers, said it plans to use the proceeds to upgrade and expand its fifth-generation (5G) phone network.

The company will be joining China Telecom, which announced in March that it plans to list up to 12 billion shares on the Shanghai exchange, seeking to raise about 54 billion yuan.

Both companies will retain their existing listing in Hong Kong. China Unicom is already listed on both Shanghai and Hong Kong exchanges.

The three Chinese carriers were delisted in the US following a Trump-era ban restricting US investment in Chinese technology companies. The subsequent Biden administration has not lifted the ban.

US snub aside, Chinese companies listed overseas have been encouraged by the government for several years to "come home."

Those that have returned or are in the process of returning include Semiconductor Manufacturing International Corp (SMIC), China's largest chipmaker, which executed China's biggest IPO in a decade in 2020; computer manufacturer Lenovo and vaccine developer CanSino Biologics.

In May, China Mobile announced its plan to issue up to 965 million shares, or 4.5 percent of the expanded shareholder base, according to a statement to the Hong Kong Stock Exchange.

The share price has not yet been determined, nor does the stock have a listing date yet. Based on China Mobile's closing price of HK$48.4 (US$6.2) in Hong Kong on Monday, the value of the listing would be roughly HK$47 billion. 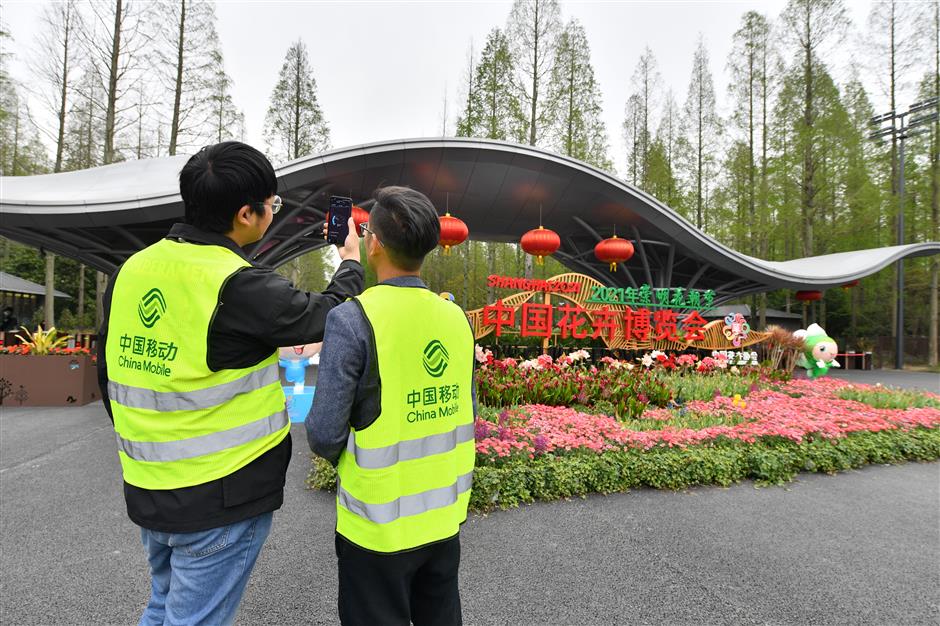 China Mobile staff works in the flower exp in Shanghai.

Given the relatively higher valuations in the Chinese mainland capital market, the total IPO fundraising may well exceed 50 billion yuan, according to analysts.

"China Mobile has a huge user base and stable profitability," said Deng Xindeng, a researcher at Wuhan University. "I think mainland investors will be keen to buy shares."

"I will buy shares in China Mobile if it's in the Shanghai market," said Ding Ding, a young Shanghai investor. "After all, I pay its bills every month and contribute to its income."

Overall, the telecom fundraisings will be a boon to development of Chinese mainland telecommunications.

As of April, China's 5G smartphone user base surpassed 310 million, still less than the 20 percent penetration into a total mobile user base of 1.6 billion, according to the Ministry of Industry and Information Technology.

The proceeds from China Mobile listing will be used to build premium 5G networks, new infrastructure for cloud-computing resources, gigabit broadband and research, and development of next-generation digitized ecosystems, the carrier said in a statement.

With the added cash flow, China Mobile will be able to take advantage of its market dominance to change and reshape China's 5G landscape. It may develop "killer applications" in cloud, digital entertainment, industrial and other sectors in the future, said analysts.

Shanghai IPOs will indeed give rivals China Mobile and China Telecom the financial clout to pursue growth in their networks.

By the end of 2020, China Telecom's 5G user base had expanded to 86.5 million. The company's proposed Shanghai IPO won regulatory approval in April.

By 2025, 5G is forecast to directly boost the national economy by 2.93 trillion yuan, with a higher user base and applications in an array of industries. There are more than 9,000 5G applications for factories, transportation, education and other sectors, according to the ministry. 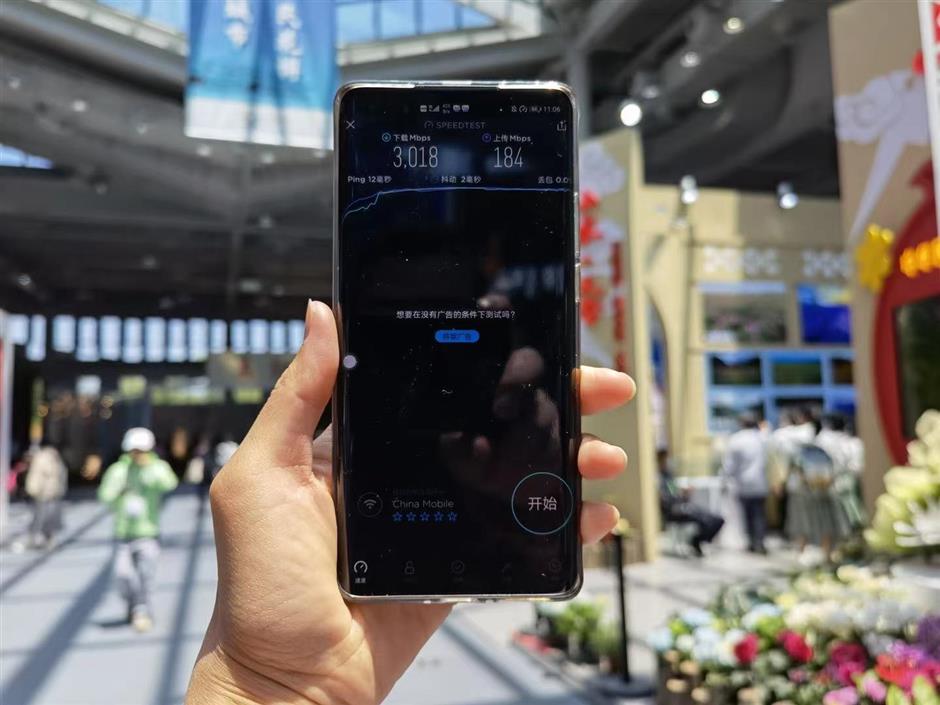 The exodus from New York comes after former US President Donald Trump's decision to bar Americans from investing in Chinese mainland companies deemed to "have ties to the military," a link the Chinese government has always denied.

For returning companies, the time couldn't be more advantageous.

China's A-share markets are increasing attractive to global investors, underpinned by the nation's success in quashing the coronavirus outbreak and its resilient economy.

Last week, overseas capital swarmed to mainland markets, with a record net influx of 46.81 billion yuan via "stock connect" programs with offshore markets. The highest daily inflow ever was recorded on May 25.

The recent spike was partly fueled by a stronger yuan, with the currency hitting new highs against the US dollar. Chinese regulators stepped in this week to rein in the surge.

Global investors, especially financial institutions, are expected to boost their holdings in China's stock market, the world's second-largest, as its shares are added to more global equity indices.

Index compiler MCSI, as one example, has included some A-shares in its flagship indices in recent years.

Still, China remains under-represented in most global investment portfolios, even after foreign holdings in Chinese onshore equities more than doubled in the past two years to more than US$400 billion, according to UOB Asset Management.

"But things will gradually change because representation of China A-shares in global indices is expected to rise significantly," UOB said.

MSCI said it has launched a new suite of China thematic indexes designed "to help investors capitalize on the long-term, structural changes in China, which may drive performance in a rapidly changing world."

Another index provider, the FTSE Russell, has been in active talks with Chinese regulators about reform measures that could help increase the weighting of Chinese onshore shares in its global indices.

Twenty-five percent of the investable market cap in Chinese stocks will be added to FTSE's global indexes by June. Du Wanming, FTSE Russell's director of Index Policy for the Asia-Pacific, said the goal is to increase figure gradually to 100 percent, although that would require more complicated reforms.

SMIC and CanSion are now dual-listed in Hong Kong and Shanghai, while HK-listed Lenovo is going to list on the Shanghai STAR Market soon.

All the returnees, as market leaders in their industries, are expected to be added to international indexes.