Smart device makes it easier for seniors to take taxis 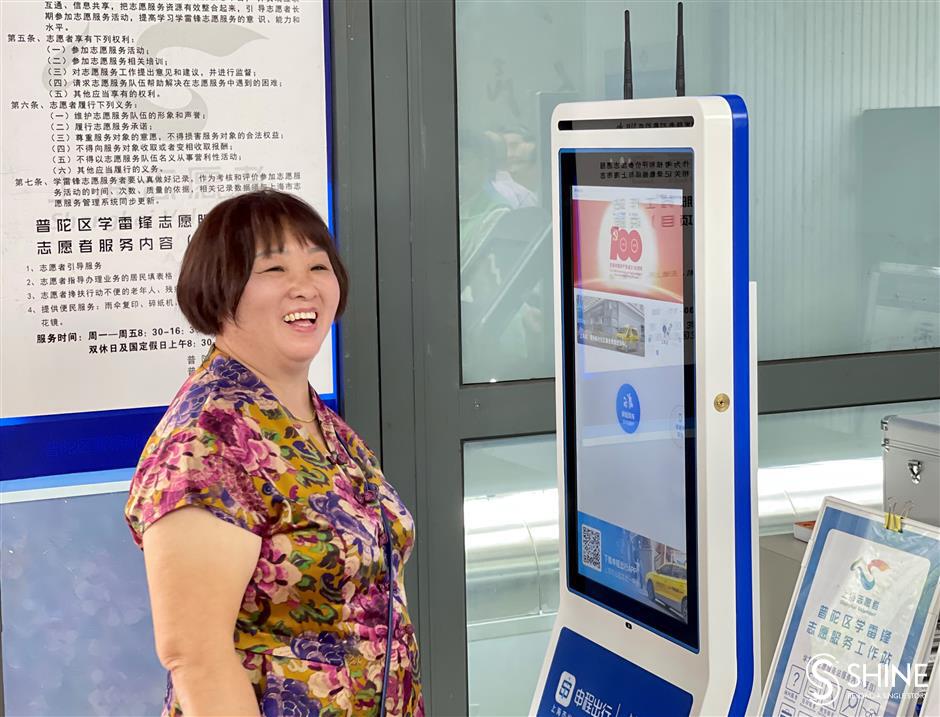 Zhang Yazhu, 65, becomes one of the first users of the smart taxi-hailing screen at Caoyang Community.

Calling a taxi can be difficult in Shanghai, especially for the elderly who cannot use a car-hailing or digital payment app.

Most cab drivers now receive ride requests through mobile apps, making it difficult for people to hail on the roadside.

To solve the problem, local authorities have launched a new smart cab-hailing screen for downtown communities, enabling residents to call taxis by pressing a button or simply scanning their faces on a screen.

The service, together with the taxi-hailing app "Shencheng Travel," has been introduced by the city's transport and housing authorities as well as SAIC Motor, primarily to help the elderly who may not be adept at using smartphones.

The first batch of 10 devices has been installed in the Caoyang Community, known as China's first workers' community built in the 1950s, as well as the North Bund in Hongkou and Xujiahui in Xuhui districts.

Smart technologies like artificial intelligence and 5G are being developed across the city to boost digital urban management and cap Shanghai's digital transformation strategy.

However, seniors face a number of obstacles when it comes to using common digital tools and services, such as health QR codes, taxi-hailing apps and self-service checkout at supermarkets.

"This is part of the efforts to continue driving the digital transformation of Shanghai's transportation system, while offering more convenient services to the elderly," said Yu Fulin, director of the Shanghai Transport Commission.

He said the commission realizes it has become increasingly difficult for seniors to catch a taxi on roadsides, especially during bad weather.

By the end of June, a total of 100 screens will be installed in 10 local subdistricts and towns with large senior populations. The service will be further promoted across the city, and the devices will be available at neighborhood entrances, community service centers and medical clinics frequented by the elderly. 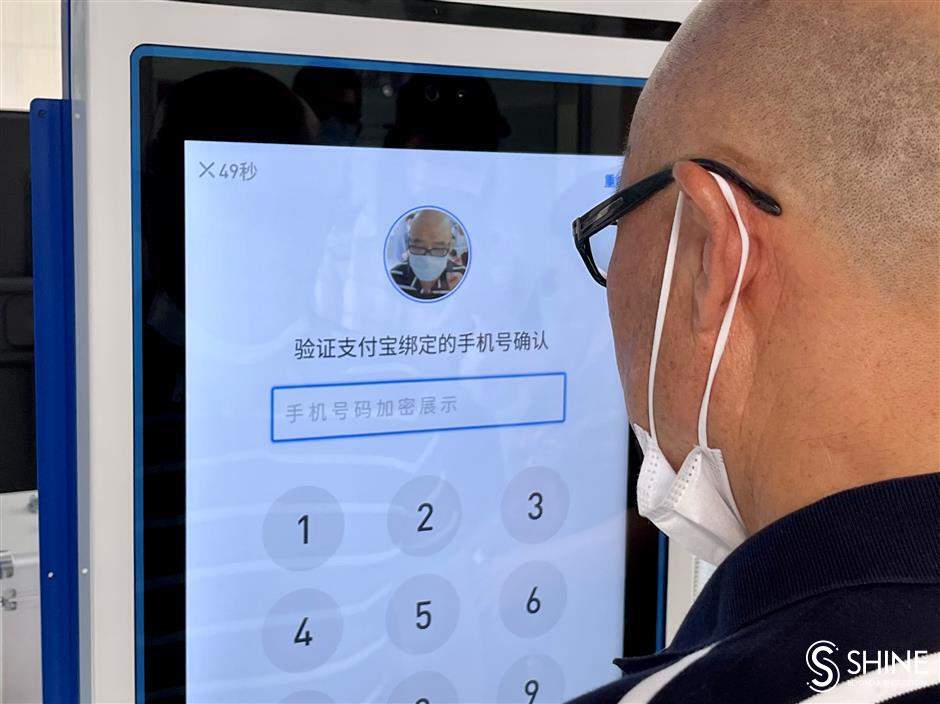 Users can call a cab by either scanning their faces or inputting their phone number.

Passengers can press a hailing button on the screen without inputting their destination, a major difference compared with traditional ride-hailing services. People with Alipay accounts can call a taxi by scanning their faces.

After pressing a button, nearby taxis receive a notification via the app and pick up passengers. The system gives priority to seniors over 60 years old, who may wait for less time. Drivers will also be reminded to offer better services, such as helping with wheelchairs.

Specialized parking spots for taxis are set up next to each device where drivers can wait for passengers, which solves the problem drivers sometimes have with passengers' erroneous mobile location service.

After arriving at their destinations, passengers can use traditional payments such as cash or transport cards.

Currently, more than 100 taxi companies with a total of 20,000 taxis have registered on the platform.

The first smart taxi-hailing screen was unveiled on June 16 at the community service center in Caoyang, where more than half the residents are over 60 years old, said Zhang Lei, deputy director of Caoyang Subdistrict.

The community, covering about 2 square kilometers, sprung up in September 1951 as a home to model workers, a forerunner to other workers' communities built nationwide to accommodate a growing workforce during a period of rapid industrialization.

As the first "new community" in Shanghai that opened up to the outside world, Caoyang has received more than 300,000 people from over 150 countries and regions. High-ranking visitors include former US President Richard Nixon and other national leaders.

Caoyang resident Zhang Yazhu, 65, takes a taxi to Putuo Central Hospital every week. It used to take 30 minutes on average to hail a taxi on the roadside.

"Most of the cabs display 'busy' signs, because they're on the way to pick up passengers calling through apps," Zhang said. "Some drivers apologize by waving their hands but never stop." 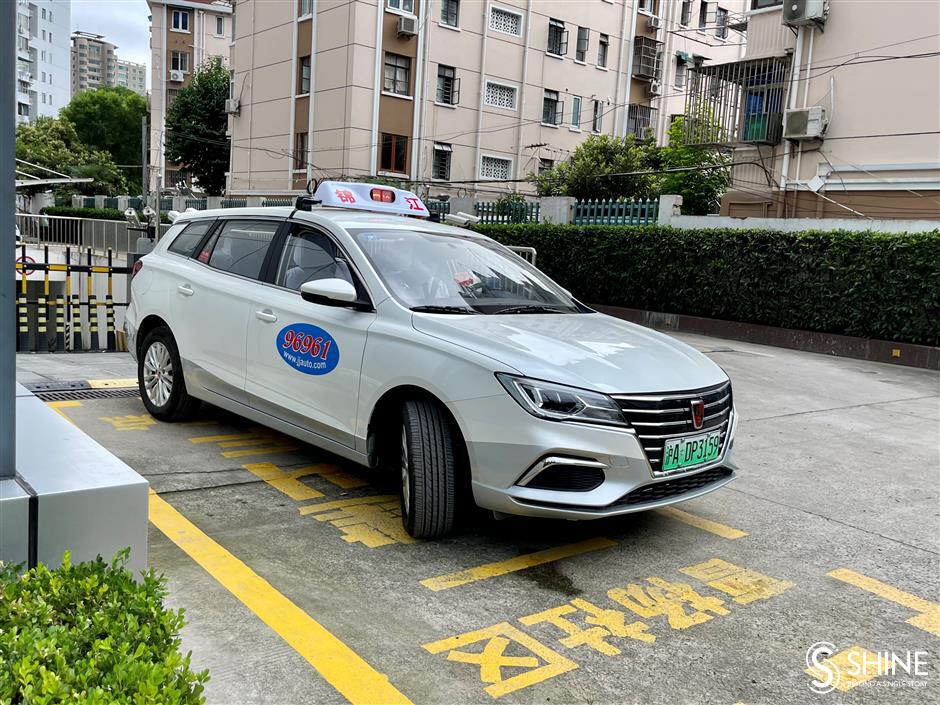 A designated parking spot is set up next to each taxi-hailing device.

She became one of the first users of the smart screen installed at the community service center. A volunteer provides guidance for those who have trouble using it.

Zhang pressed the button and input her mobile number, because she doesn't have an Alipay account. The system showed a nearby cab would arrive in five minutes, and the driver called to confirm her request.

"It takes no more than 10 minutes to get a taxi," Zhang said. "It has truly solved my problem."

During its heyday in the 1990s, taxis with different colors from several leading companies, including Dazhong and Qiangsheng, shared the prosperous local market. The income of a local cab driver was once higher than most other workers.

The situation has changed in recent years with the prevalence of car-hailing apps. Private vehicle drivers registered on apps like Didi can pick up passengers just like taxis. To compete with car-hailing services, cab drivers have begun using car-hailing apps as well.

"The smart screens aim to create a buffer zone for the elderly with a compromise 'online hailing' solution," he said.