Shanghai banking on sponge parks to become city of ecology

Shanghai's growing number of parks and greenbelts are part of its 14th Five-Year Plan (2021-25) to become a "city of ecology" but they also are intended to operate as "sponges" – to absorb drainage as well as collect and purify rainwater.

Two years ago, the Shanghai government issued regulations on the city's planning and construction of a "sponge city," an approach which will turn a city into a large "sponge" to handle drainage problems through facilities and technologies.

According to the document, urban planning, construction and management should consider the functions of eco-systems like absorbing, storing and relieving rainwater in areas including buildings, roads, greenbelts and river networks.

It requires this idea to be implemented in the construction of facilities such as drainage systems, gardens, greenbelts and streets.

All 16 districts of Shanghai have taken action to renovate their existing parks and greeneries or build new ones. The sunken plaza at Yangpu's Wujiaochang, roads around the "Shanghai Fish" Lake, or Jinhai Lake in Fengxian, the Urban Best Practice Area of Shanghai World Expo in Huangpu are all outstanding examples of its campaign.

How is this project progressing? Different districts provide different results. 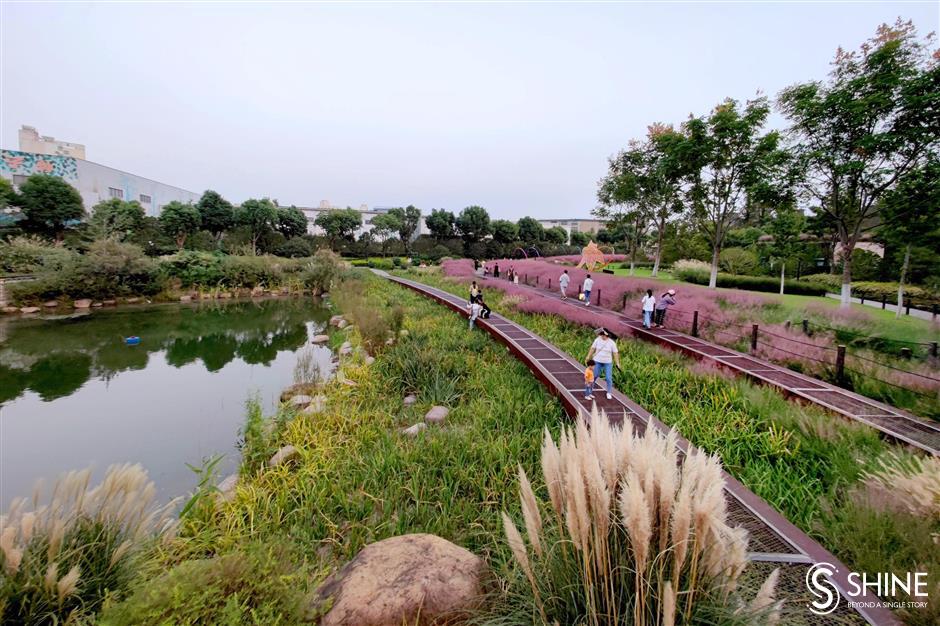 Rainbow Bay Park in Hongkou District has "sponge city" designs in its gardens, ponds and greenbelts. 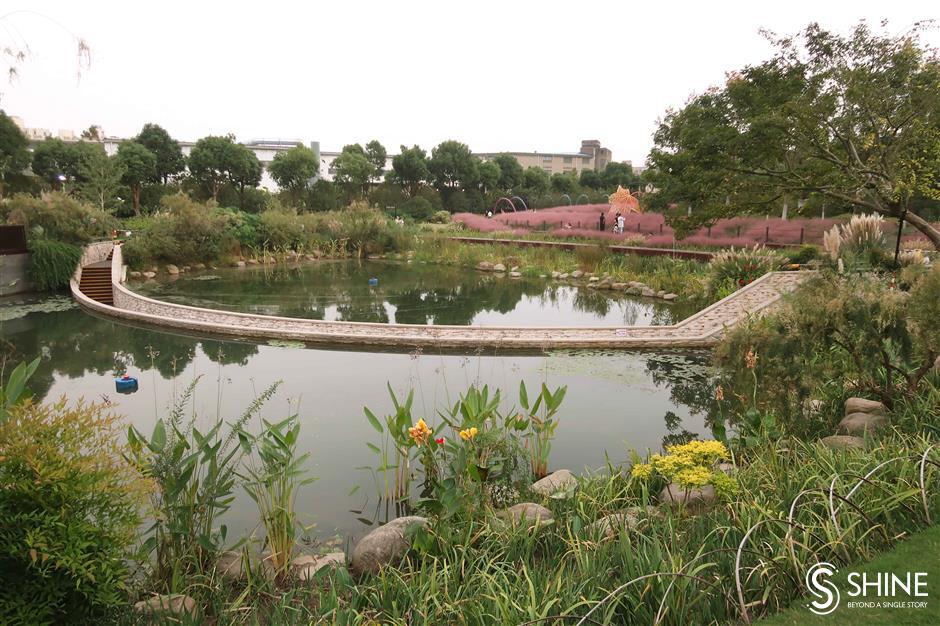 The park introduces the ideas of a "rain garden," and "conservation green space."

Walking in Rainbow Bay Park, which is now popular online thanks to its flourishing, pink-flowering Muhlenbergia capillaris, residents can discover "sponge city" designs in its gardens, ponds and greenbelts.

In recent years, a number of sponge parks and greenbelts has popped up in Hongkou District and the Rainbow Bay Park is one of them.

Surrounded by residential buildings, the park introduced the idea of a "rain garden," referring to a practice designed to treat polluted stormwater runoff with plants, and "conservation green space" which is ecologically sustainable with the least impact to the neighboring environment and has the least cost.

Near the pond, over which there's a plank pathway for visitors to walk, a sunken "rain garden" is built with aquatic plants and hygrophytes which can absorb and purify rainwater. It is a "forest under water."

At dusk, many parents and grandparents living nearby love to walk in the park with young ones. 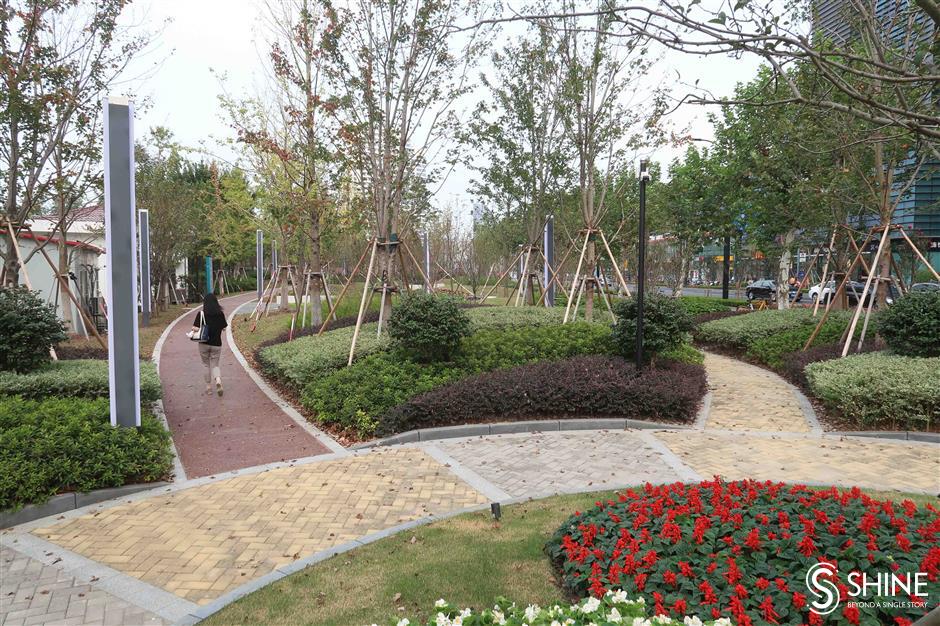 "There's no flooding here on rainy days, the pond can store rainwater," said a grandpa surnamed Li, 72, who took his 2-year-old grandson to the park. "It's better to have some entertainment facilities for children to play."

At the intersection of Pingliang Road, Dalian Road and Yangshupu Road, a green space recently re-opened with a new look.

"In the past, here is a residential community," she said. "Now it's good for take a walk in the green space."

The green space uses water permeable bricks and pervious concrete on its paths to reduce rainwater on the surface and relieve the burden of city drainage.

It's all designed with eco-friendly ideas, even the wall of its public toilet has vertical greening. 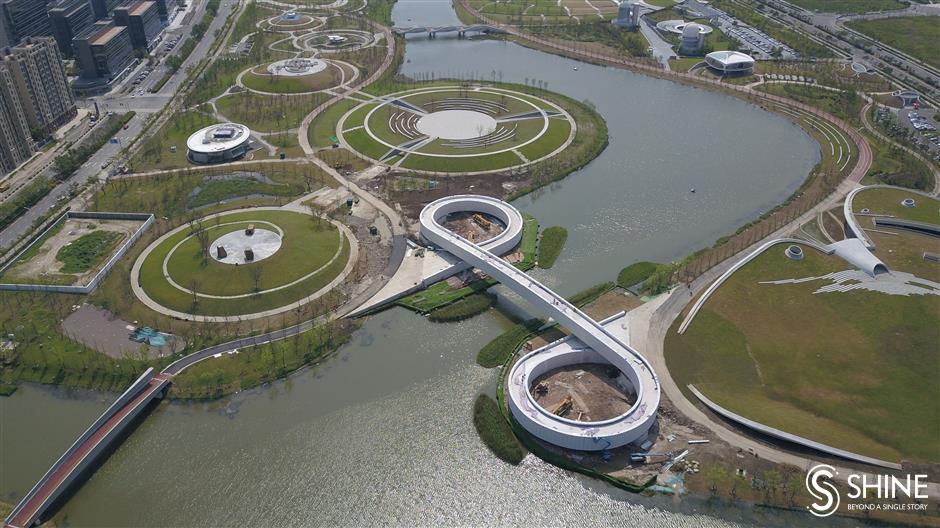 With the opening of the Shanghai Astronomy Museum in Pudong's Lingang, nearby, the city's largest sponge park "Starry Sky" also open to the public in August.

It now has 500 hectares of greenbelts in parks, 200 hectares of communities which have been renovated with sponge designs and 56 kilometers of eco-friendly creeks.

The 54-hectare park has 38 hectares of land and 16 hectares of water area. As well as typical designs like permeable pavement and rainwater gardens, it also has a landscape ecological corridor, sponge ecological wetland, urban rainwater storage and purifying facilities.

The designer added a 30-centimeter-thick rubble layer under the soil to filter water.

It has ditches with plants which can control water flow and pollution, a landscape dry creek, ecological retention pond and artificial wetland. 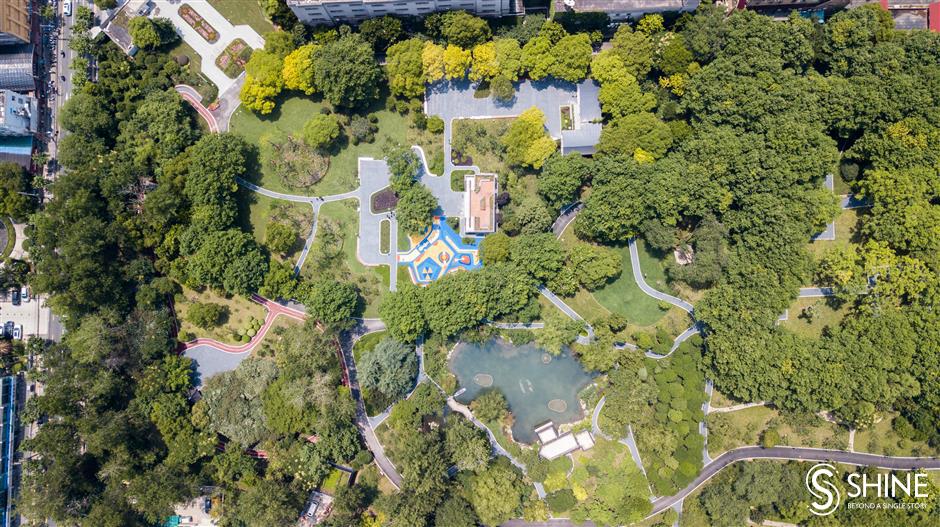 And the district also has renovated roads including Xiangyang Road N., Tongren Road and Gonghexing Road with "sponge city" technologies.

The porous pavement has rainwater pipes underneath. After the renovation, there's even no track of water when it's drizzling, and no flooding will be caused when it's raining heavily.

Zhabei Park, the oldest park in Jing'an District, was renovated in accordance with the city's "sponge city" concept of water management.

A new drainage system channels rainwater into an underground purification and storage system which also prevents rain from pooling on roads.