Shanghai on route to become a global digital hub by 2035

Shanghai is building itself into a "globally influential digital hub" by 2035, with major information technology upgrades for a range of industries.

It's more than just a red-tape slogan.

The city has a blueprint with the 2035 plan and a near-term plan as the Shanghai's five-year digitalization plan by 2025 was released last month. Shanghai has established an ecosystem to boost innovation and digitalization, such as booming artificial intelligence and telecommunications network infrastructures, data usage and transaction policies, and a professional exchange and improved business environment and capital market for tech firms and talent.

"The digital city upgrade is a national strategy to strengthen China's abilities in manufacturing and broadband. It also offers tools for us to better serve people and their daily lives," said Wu Jincheng, director of the Shanghai Commission of Economy and Information, the city's top industry regulator.

Local government officials, including Wu and higher-ranking officials, have drafted the digital infrastructure blueprints, covering the 14th Five Year Plan for 2025 and Shanghai's longer-term plan for the city's economic development for 2035.

The digital targets include building faster 5G and broadband networks, construction of intelligent factories and digitized hospitals, developing AI and data-driven services, and boosting applications for aged and disabled groups.

In detail, it includes digital transformation covering at least 80 percent of large local manufacturers; over 100 benchmark digital tools to improve people's lives; over 80 percent e-governance applications available online, and construction of 100 million Internet of Things sensors and devices, according to the latest government blueprint.

AI and 5G are two key digital infrastructure pieces and dual growth engines for Shanghai's digital plan which help the city deal and transfer data in smart and efficient ways. 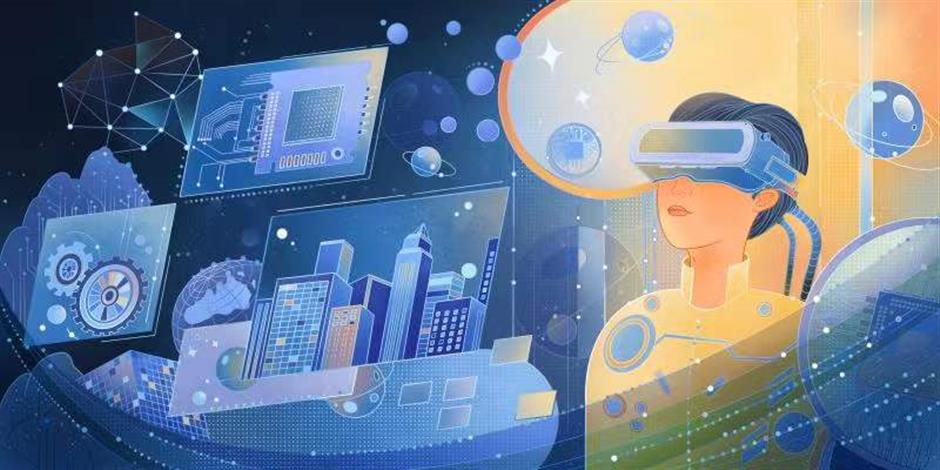 By 2025, the scale of Shanghai's artificial intelligence industry output will hit 400 billion yuan (US$62.5 billion), with 12 percent annual growth on average, more than double the city's GDP growth rate, according to Shanghai's AI development blueprint for 2025 released recently.

Shanghai will become a hotspot for AI innovation and development with international influence, covering original achievements and cutting-edge theories, a batch of national and municipal innovation platforms, and a localized regulation system known as "Shanghai Format."

Broadly, the city will have 10 AI-powered sub-divided fields with an annual output of over 10 billion yuan each, 500 digitized firms with leading AI applications, over 1,000 new AI invention patents, and over 300,000 AI-specialized employees in Shanghai by 2025.

For Xu Li, SenseTime's chief executive, Shanghai is a city "of the highest importance for growth and career development," said the graduate of Shanghai's Jiao Tong University during the ringing ceremony of the company's Hong Kong listing.

SenseTime, whose share price has almost doubled since its HK market debut last week, is one of the biggest listed AI firms in Asia. It has chosen Shanghai as the location of the headquarters of SenseTime China. In 2022, SenseTime will build a AI computing center in Shanghai's Lingang Special Area, and it will be one of the few with the most powerful AI calculation capabilities in Asia.

In Shanghai, there are more than 3,000 firms with "data" in their names; one-third of which have been founded since 2020. This indicates the great potential of the whole data-driven and AI ecosystem, said Fudan University, citing industry sources.

Besides AI, Shanghai has leading positions on 5G and broadband networks nationwide and globally.

The 5G network makes resources and data flow better and more efficiently and boosts the digital economic development of the city.

Shanghai has been recognized as one of China's One-Gbps cities, offering some of the fastest Internet in the country. The city is one of 29 cities in China's first batch of One-Gbps cities, meaning both 5G and broadband bandwidth surpass 1 gigabyte per second, according to the Ministry of Industry and Information Technology.

The carriers, encouraged by government regulators, have upgraded networks to boost speed and ensure telecommunication service prices remain the same or decrease.

Shanghai consumers will be able enjoy faster and more affordable 5G and family broadband services with a free upgrade to one Gbps bandwidth. China Mobile is offering free upgrades in broadband bandwidth in Shanghai of up to one gigabyte per second (Gbps), said the world's biggest mobile carrier, with about 1 billion users.

Mobile networks are a key part of information infrastructure to help Shanghai boost innovation, push economic transformation, and build the city into a global digital hub.

China Mobile, which raised about 56 billion yuan in its Shanghai IPO, will use the proceeds on network construction, data centers, cloud networks, and Internet of Things technologies.