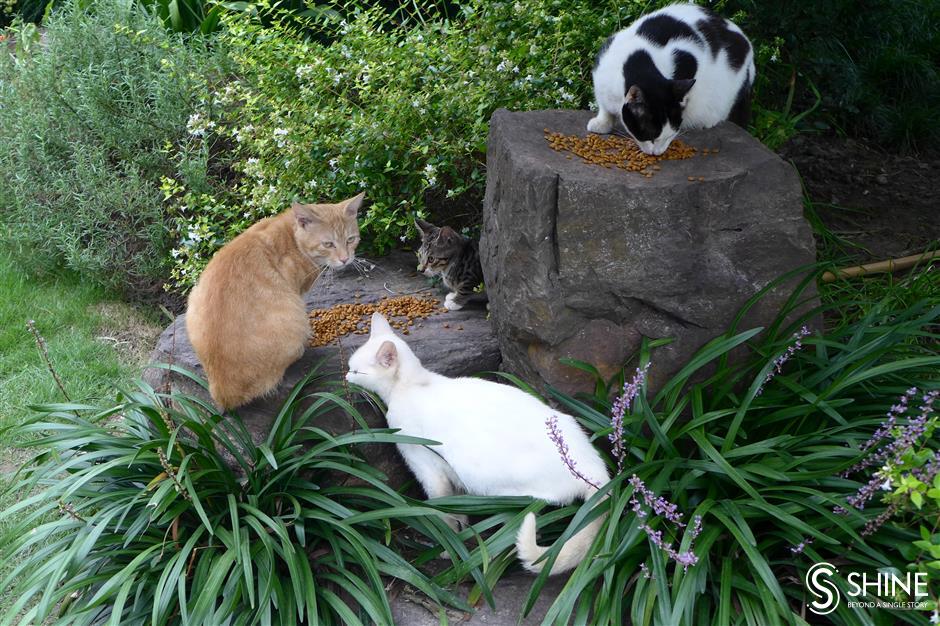 Controlling stray cats can be complicated. Public opinions on strategies for managing them vary.

When I went to a residential committee in Pudong for an interview about the community's successful management of free-roaming cats, my attention was first drawn to four framed notice boards.

The boards first explained TNR (Trap-Neuter-Release) as a widely accepted approach to roaming cats control involving 1. trapping stray cats; 2. having them spayed or neutered, and 3. returning them to their original territory.

The notices went on to extol TNR's efficacy in controlling the cat population, and enhancing cat-human relations, in the effort to build a "model community."

At the end of each board was a telephone number for the benefit of residents wishing to join in as volunteer caretakers.

I was referred to the community committee for its exemplary work in resident self-governance by Yangjing Subdistrict Office, in Pudong, after making known my intention to conduct an interview about stray cat management.

Stay cats control can be more complicated than it first appears.

When I first mentioned this program to a colleague who had been a veteran cat owner, it took me quite a while to explain why TNR, rather than another instance of meddlesome human evangelical fervor, is an eminently feasible compromise between those who care for cats, and those who view them more as nuisances.

Xiao Liao, who works at the Self-Governance Office, explained that the cat-control program was part of a zizhijin project, or "self-governance funding" project, under the Yangjing Community Foundation. The project, which includes the cat control program, is an innovative initiative to catalyze residential self-governance by leveraging a modest amount of funds, which ultimately come from government and residents' donations.

When a proposal for a project is submitted, it will be rated after rigorous expert assessment and evaluation. The current cat management program, given two stars in light of residential engagement and degree of self-governance, is entitled to a sum up to 30,000 yuan (US$4,700). Actual funding will be determined by adding up the itemized costs. 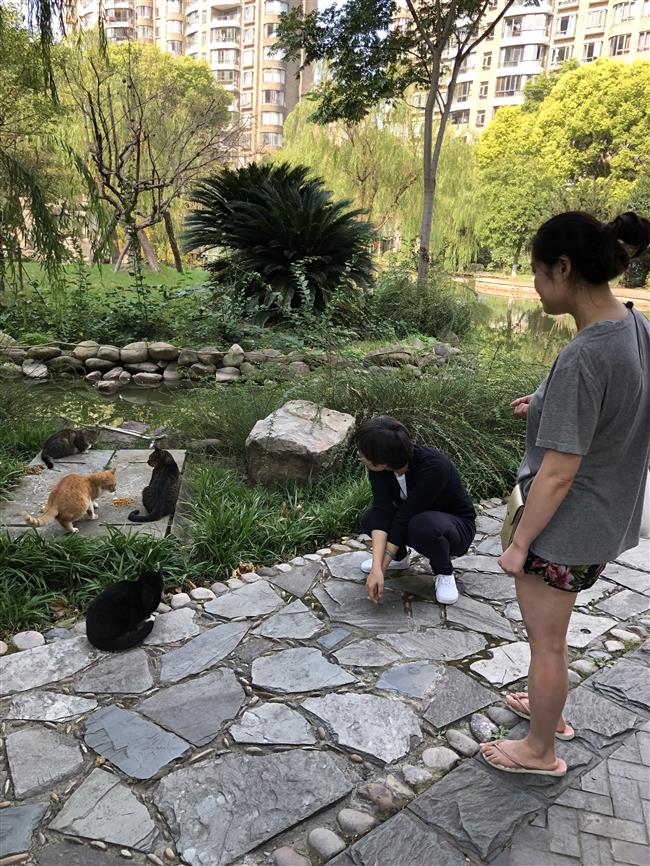 Volunteers in a Pudong community provide special pet food at designated locations to avoid the mess created by leftovers supplied by residents.

Lou Xia was one of the first to be actively engaged as volunteer in executing the program four years ago. She said the program first of all seeks to reconcile the seemingly confrontational stances of those who care for cats, and those who are more concerned about the growing numbers of stray cats, and their environment and hygiene impacts.

"Obviously throwing those cats out of the neighborhood is no solution – not to mention this would further antagonize feline lovers, then there will be intake of new cats," Lou said.

By keeping a close tab on the number of the stray cats and preventing them from producing more kittens, the population of free roaming cats has now declined to 30, which are more or less manageable since all have been sterilized.

"Of course, there is the possibility of more cats being introduced," Lou said. "Immediately when this happened, they would be subject to TNR management. The sterilized cats will be easily recognizable for their 'eartips'." 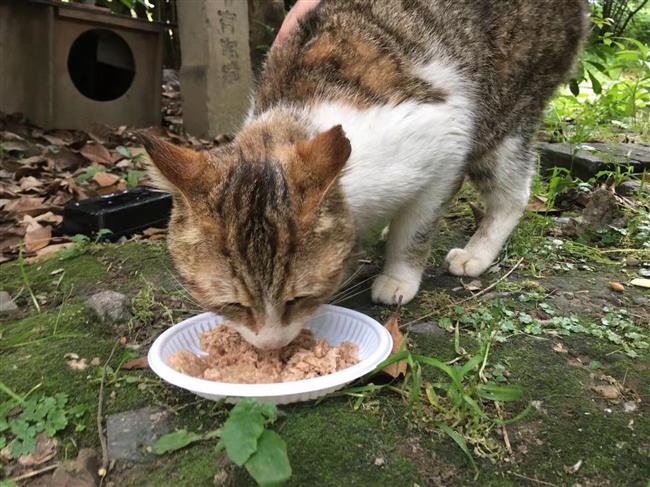 The sterilized cats can be easily recognizable by their "eartips."

The marked ears are easily recognized by volunteers, and would convince residents that the cats are being managed. Since cat food is provided at designated locations, and stray cats, particularly sterilized ones, tend to be more fixed in their territory, outsiders would be recognized at the earliest opportunity.

Spayed or neutered cats lend themselves to management. They fight less, and show less nuisance behaviors like yowling and territory marking, which is more associated with mating.

Another volunteer who preferred to be identified as Pipi got involved last year. At the beginning she was wary of joining the WeChat group, but thought otherwise after finding the other volunteers all so open and charitably minded.

"I would focus on one cat, feeding the one cat and those in its company, and if I fail to see the cat, I would ask in the WeChat group if anyone has seen it," Pipi said.

"When I feed, this is often in full sight of children and their parent," she said. "The children would try to touch the cats, and from this you could see there is a sort of natural affinity between cats and human beings."

But there are those who detest cats, who would accuse the volunteers of being responsible for the many environmental problems, Pipi said.

"A couple of days ago, when I was feeding a cat, a middle-aged woman who happened to be passing by, instead of confronting me, tried to drive away the cats by stomping her feet," she said. 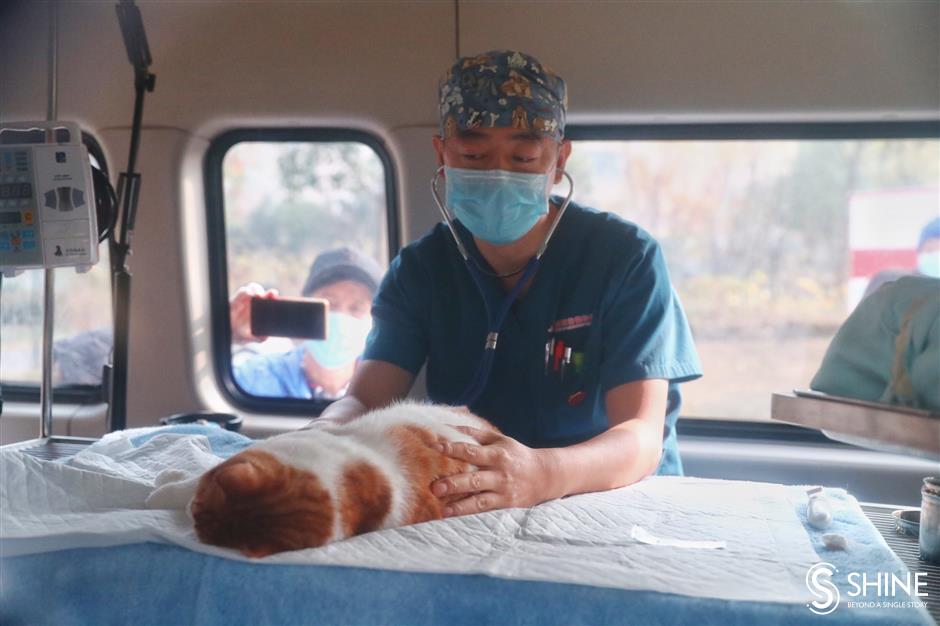 A stray cat is neutered by a volunteer veterinarian in Pudong.

There are also those who added salt or water to the pet food provided, or simply dumped the food into garbage can.

"We are actually managing the colony, for if we do not supply food, the cats would prowl the neighborhood for food, and some caring residents would supply leftovers, meat, even fish, that will definitely aggravate the environment," Pipi observed.

She added that she used to pick up quite a few containers for such food on an average day. Such containers are less seen today, as a result of improved management. There are even residents appealing that residents should stop supplying food and leave the task to volunteers.

Peng Bing, director of the neighborhood committee, said the subdistrict office has been very supportive because "the volunteers are going about the program in a very responsible and earnest manner, with some seen cleaning up constantly."

"They have their share of complaints, but then they would clean up the mess all the same," she said, having in mind the leftovers provided by residents. 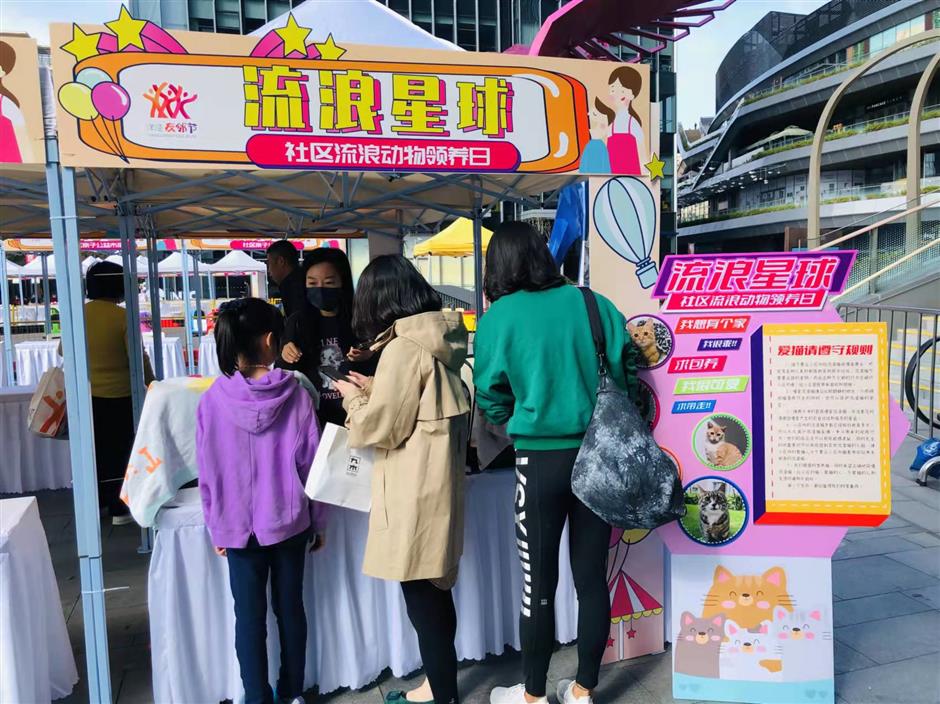 Adoption and fostering events like this could provide a solution to the stray cats problem. A true feline lover today does not have to buy a cat, or dog.

Peng explained that the funding provided suffices for routine sterilization, which is essential for satisfying communal needs for population control, but is totally inadequate for treatment of the cats at a veterinarian clinic, which is "super expensive."

When cats are being neutered or spayed at a clinic, that would entail vaccination and pest control, and a few days of staying at the clinic for convalescence. All the treatment incidental to the surgery need to be subsidized by residents, through donations to the foundation. Access to funding is under the most rigorous screening and supervision.

Entities like TA (Think Adoption) Shanghai would hand out coupons regularly that would secure the most affordable surgery with some clinics.

"As the coupons are hotly competed for, we would go to a nearby clinic that is a cooperative partner of TA Shanghai, and, in view of our long-term partnership, we got the same preferential price without coupons," Peng said.

More importantly, the programs need to be universally implemented in all neighborhoods to be truly effective. Failing this, the plentiful supply of food and shelter in one neighborhood would create a vacuum for stray cats from other neighborhoods, thus frustrating attempts at effective control. Hence the need for coordinated effort throughout the city.

Keeping pets is an easy affair, deceptively, thus even long-standing pet owners stand to profit from the philosophy underlying organizations like TA Shanghai.

TA can mean both "Think Adoption" and the pinyin for "it" in Chinese.

Given the environmental and hygiene implications of community cats, adoption is the least controversial solution, though far from enough.

Simple calculations (based on cats' amazing reproduction power) would suggest that, to achieve sustainable management, stray cats should be subject to either of the following two options: 1. euthanasia, or 2. non-lethal population control.

This is where "Trap-Neuter-Release" comes in. By trapping cats, having them neutered, and then releasing them back to their original territory, this program provides a solution by resorting to non-lethal population control. 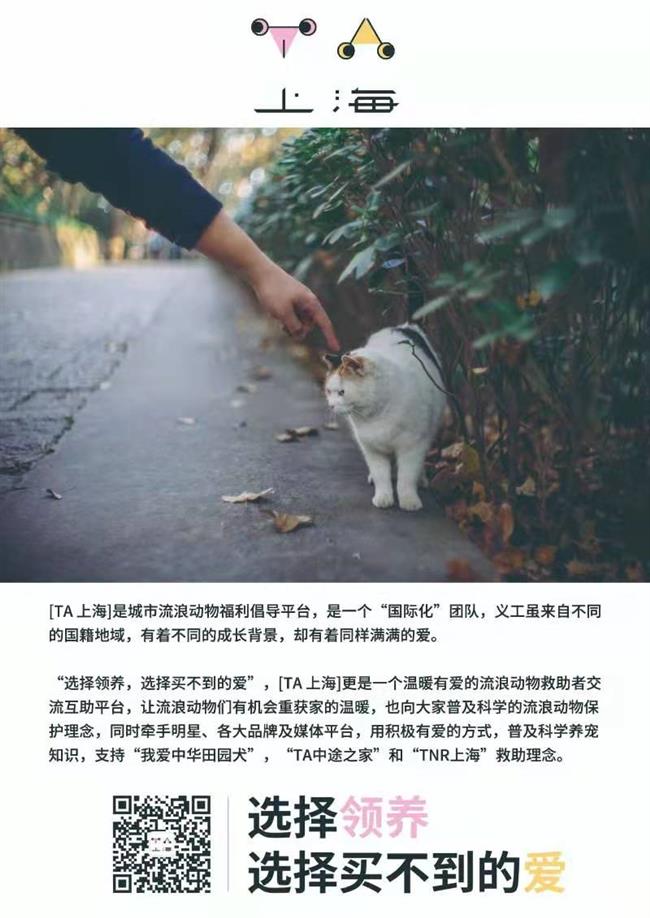 Neutered pets are less active and less noisy, and tend to be more fixed in their territory, minimizing adverse environmental impact.

Community cats after sterilization do not mitigate the risk of spreading diseases, and their impact on wildlife population remains significant.

TA Shanghai's advocacy is based on "rational rescuing, scientific pet-raising, and preferring adoption to purchase," with lectures aimed at educating the public about how to care for house cats properly to reduce the number of waifs and strays.

In a recent interview, Kailing from TA Shanghai said the organization is not a profitable entity nor an organization with a viable business model.

"Those engaged in this endeavor are all bonded by a shared love for animals," she said.

In addition to core cadres like herself, more responsibilities get devolved to those working on the periphery, or volunteers who would assist with sponsored activities.

Asked about the plans for the new year, Kailing said that the organization, after 10 years of operation, is fairly established. In the new year more effort would be expended on education about native Chinese dogs, in the category of zhonghua tianyuanquan, or tugou, and about scientific sterilization of stray cats.

Adoption alone could not fully address the issue of roaming cats.

"Annually we could have over 1,000 stray cats sterilized, which are found chiefly in residential districts or public green spaces. We help chiefly by providing medical support, in disseminating scientific concepts, or by sponsoring TNR-related lectures," Kailing said.