Will you pay for enhanced inflight Wi-Fi service?

During a recent trip, he attended an online conference, had a video chat and watched short videos on Douyin (Chinese version of TikTok), thanks to the optimized inflight Wi-Fi service on the China Eastern Airlines Flight MU5101.

Due to the expanded bandwidth, videos ran smoothly on his mobile phone, even in the high-definition mode, throughout the air journey.

"The inflight Wi-Fi service used to only allow WeChat messages. It would take several minutes to open a web page," Li recalled. "So I preferred to take a nap for two hours."

Shanghai-based China Eastern and Juneyao airlines have upgraded the bandwidth and speed of their inflight Wi-Fi services. Ninety-seven double-aisle jetliners of China Eastern, among its total fleet of 750, have been equipped with the new Wi-Fi network.

Utilizing China's new Asia-Pacific 6D satellite, the highest online surfing speed can reach 220Mbps, almost equivalent to the 4G communication on the ground and about 10 times faster than the previous wireless Internet service in the air.

It is fast enough for every passenger in the cabin to watch videos simultaneously on popular streaming platforms, such as Bilibili and Douyin, said Zhang Chi, general manager of the KDlink Technology Co, which was jointly established by China Eastern, Juneyao and China Telecom to focus on new inflight Wi-Fi technologies.

The company's newly launched Inflight Wi-Fi Laboratory, China's biggest of its kind, in Shanghai's suburban Qingpu District, is behind the major technological breakthrough. 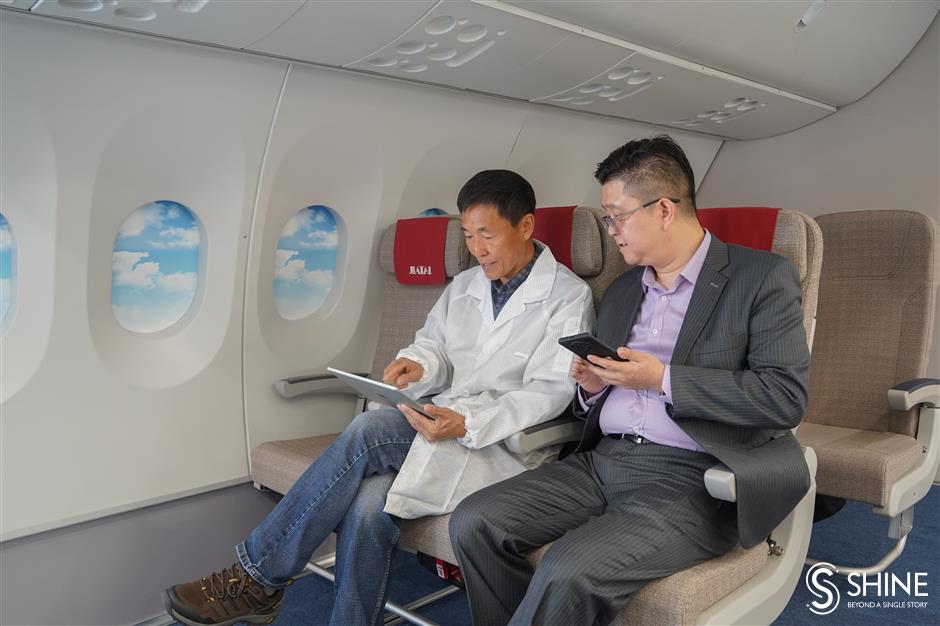 The inflight Wi-Fi services of Chinese carriers have long been lagging behind their US and European counterparts. The link to the Internet has become indispensable, even in the air, especially after the COVID-19 outbreak, as an increasing number of services are now available on mobile devices.

China Eastern became the first domestic carrier to launch the in-flight Internet connection in 2014 on the same flight Li takes between Shanghai and Beijing.

Since then, a total of 213 aircraft from 11 airlines are offering Wi-Fi services in the cabin – usually free for first-class travelers and chargeable for other passengers. Members can trade their mileages for the service. (Most other airlines claiming to offer the "Wi-Fi" service are actually local area networks only connected to the aircraft's entertainment database.)

The number is trifle compared with the country's nearly 4,000 passenger aircraft. Only 5 percent of the nation's fleet is now equipped with Wi-Fi, with China Eastern and Juneyao accounting for half.

In comparison, the three US airline giants – Delta, United and American – have up to 90 percent of their fleets covered by Wi-Fi services.

Though China Eastern, as the forerunner among domestic airlines, has provided the Internet connection for about 240,000 flights since 2014, the service suffered from key issues such as low speed and high cost.

When more than 100 passengers connected their devices to the routers in the cabin, the Internet speed could bring them back to the era of dial-up networking. 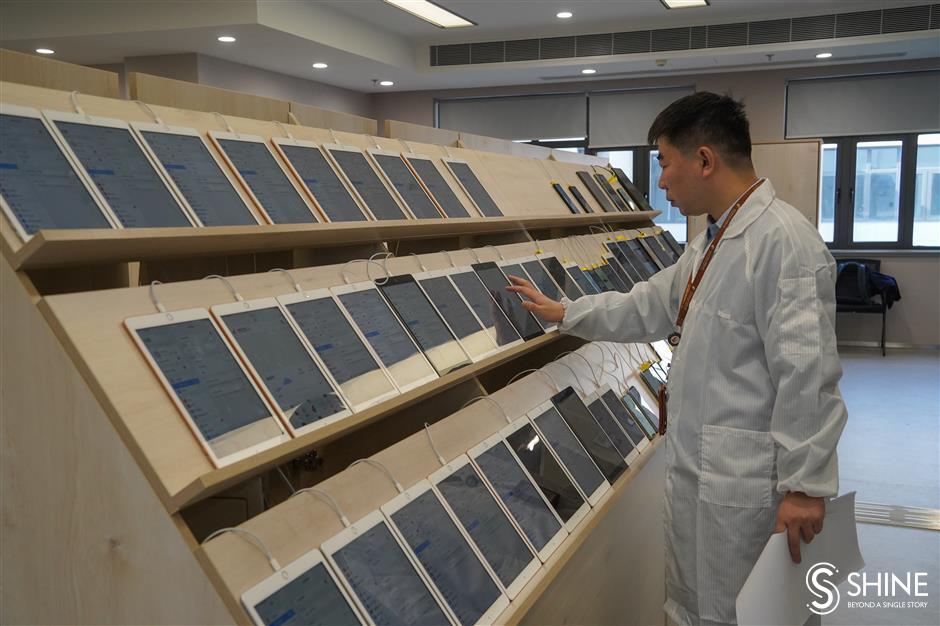 An engineer tests the inflight Wi-Fi services at the lab

So, it was urgent and essential for China to have its own research body on the inflight Wi-Fi service, according to Zhang. He led the establishment of the laboratory in April 2021.

"The inflight Internet connection is also a key project in the digital transformation of China Eastern's as well as China's civil aviation sectors," he added.

The local lab simulates the cabin environment in the air and tests the Wi-Fi equipment before they are installed on jetliners.

Some 120 smartphones, tablets and other common devices are connected to the inflight servers from about eight leading global suppliers of the services, including Airbus, FTS, Panasonic, Donica and the China Electronics Technology Group Co. High-definition movies or applications are being played simultaneously on the devices.

Engineers in the lab can develop and finish testing about two new applications based on the Wi-Fi services. They've upgraded five key hardware developments which make fast online surfing in the air possible.

Apart from the Internet services, the engineers are also developing digital applications for cabin services, entertainment and other inflight programs, noted Zhang.

Remote medical treatment, for instance, will become possible with the accelerated onboard Wi-Fi. Medical experts on the ground can make diagnosis through high-definition video chat and guide flight attendants to conduct first-aid treatment.

"Timely medical rescue is vital for patients who suffer acute illness in the air, especially heart disease," according to Zhao Wei, deputy secretary general of the Shanghai Volunteer Physicians League. 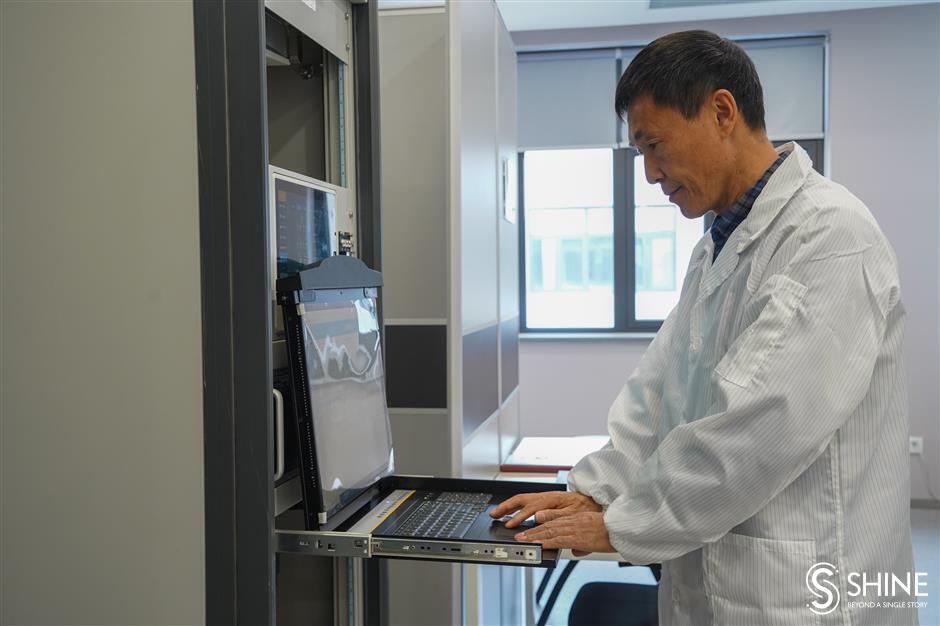 The league, initiated in 2015, has more than 1,500 members, mainly chief physicians and young medical experts from Shanghai hospitals. China Eastern has been cooperating with the league to enhance its inflight first-aid service to passengers.

Air safety can also be ensured with the continuous Internet connection throughout the flight. The operational data of each aircraft part, such as the engine, will be shared real-time with air traffic controllers and engineers on the ground.

In case of a malfunction, such as the shutdown of one of the engines, the ground supportive team can offer immediate suggestions within several minutes to prevent air catastrophe.

Despite the pandemic, the number of domestic air travelers is expected to reach 1.4 billion by 2035, bringing unprecedented development opportunities for inflight connectivity service, revealed Xin Xudong, deputy general manager of the customer service unit under Commercial Aircraft Corp of China, or COMAC.

With support from the lab, air travelers are expected to enjoy high-speed inflight Wi-Fi service on the C919 that China Eastern will serve as the inaugural operator, said Zhang Yinghui, vice director of the airlines' cabin business department.

The airline now charges 50 yuan (US$7.8) or 2,500 points of mileage for the fast Wi-Fi service on a flight. The service is free for first and business class passengers.

So, the question is: Do you feel like paying for the Wi-Fi service during your flight? 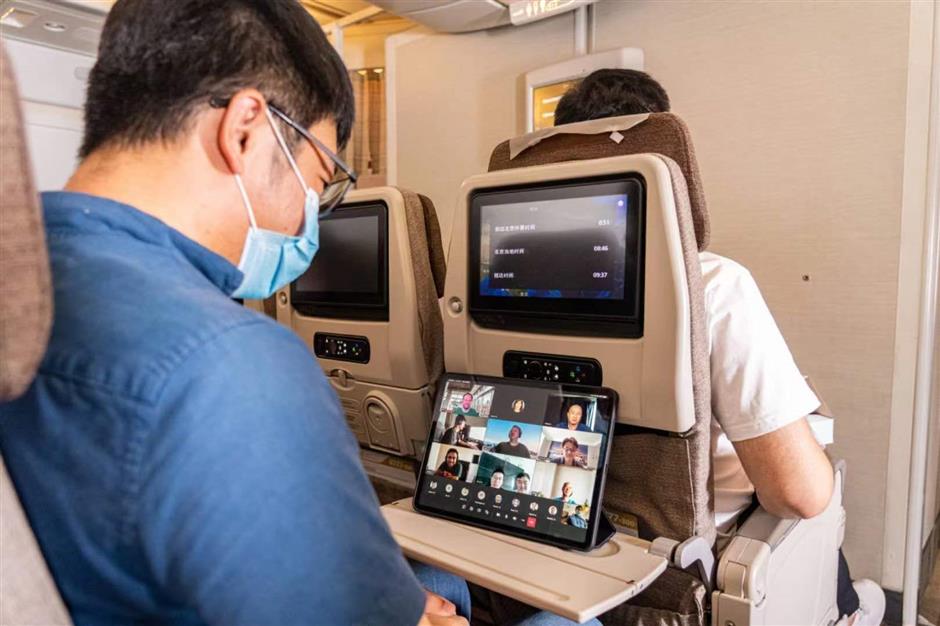