Supplies and solicitude making life easier for people in quarantine

Volunteers at the locked down No.1 Village of East China Normal University, Putuo District, are busy delivering goods, cleaning and carrying out maintenance.

Reports of sporadic COVID-19 cases in the city, including a milk tea shop on Yuyuan Road in the Jing'an Temple area, have made it necessary to impose restrictive measures in a number of affected places.

The following stories about people in quarantine, whether at home, in the office, or in a shop, suggest how governmental and volunteer support can help them cope with their difficulties.

Zhang Chenglong, a native of Zibo, Shandong Province, works for a company providing hardware and software support to universities. He lives in the No.1 Village of East China Normal University, Putuo District.

On Thursday morning, when he set out to work at about seven o'clock, he saw police vehicles, and the neighborhood exit barred by rails. A young woman carrying luggage, obviously prepared to go on a trip, was in tears, as the compound was in quarantine, and only entry is allowed.

Soon, neighborhood personnel began to knock on the residents' doors one by one, informing them of the quarantine requirements, and asking them if they needed any help. Then it became known that it would be a 14-day, rather than 48-hour lockdown.

Residents were told they would be required to take nucleic acid tests on the 1st, 2nd, 7th, and 14th days, and would be free to go if they tested negative throughout.

Residents can order daily necessities and meals through delivery services. They are received by designated community workers, and placed on shelving for pick-up.

As Zhang's six-floor building is not equipped with elevators, to administer the tests, some medical staff would go straight to the homes of elderly people who have difficulty using the stairs.

Fortunately for Zhang, a young bachelor, the way of life in quarantine is not so intimidating. He could still order daily necessities and meals through delivery, which would be received by designated community workers, and then put on a shelf for pick up.

The sudden lockdown also caught Zhang unprepared. He had just booked a ticket for a visit home on January 23, for a family reunion during the upcoming Spring Festival. Even in the best of circumstances, his isolation will end on January 28, and given the difference in containment measures throughout the country, he thought it more advisable to stay put in Shanghai for the festival.

But to an extent Zhang was also somewhat well prepared. Actually, this is his second isolation. About a month ago, while visiting a friend in Ximalaya in Zhangjiang, he had to stay with his friend for 48 hours after quarantine was suddenly instituted. 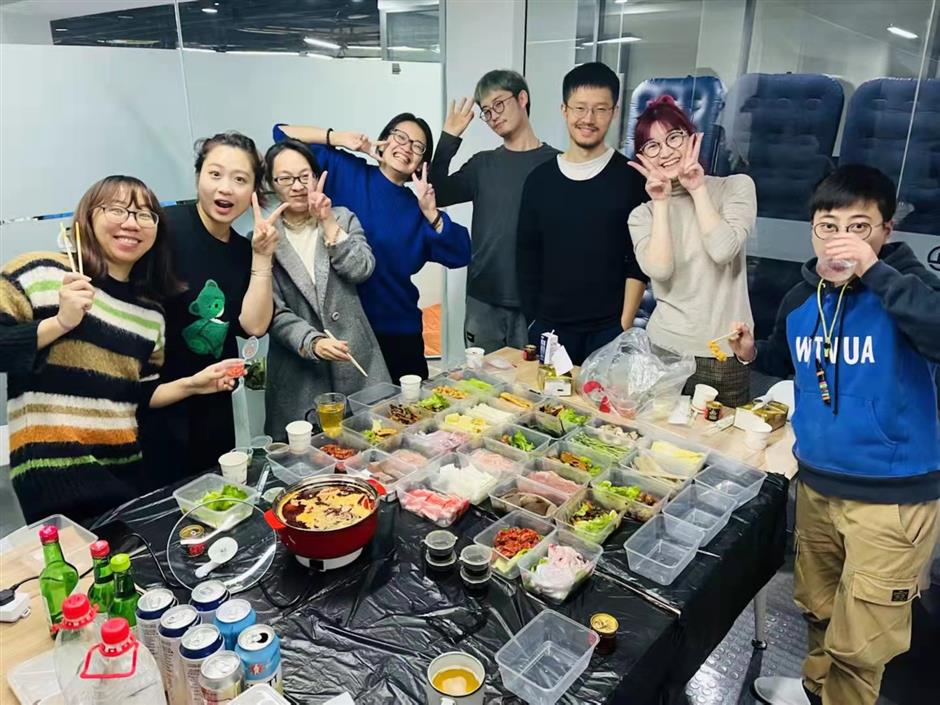 Being locked up in an office could conjure up images of hardships, which might not necessarily be true.

As a matter of fact, when asked how she felt about it, Zhu Sijun, one of the about 50 UNIQUEAD employees to be put in quarantine at their office in 800 SHOW Creative Park on Friday, said it is "rather good," with "plenty of food, drinks and fun going around."

About 9am on Friday morning, 26-year-old Zhu and some of her Shanghai colleagues, those who had been at the office since January 8, were told to return to the office as soon as possible for quarantine, bringing with them necessities that might help them survive the two day period. Some carried with them mattresses and camping gear.

In a notice shared on the company's WeChat group, it announced that in the pandemic containment, the company "must act strictly in reference to relevant government arrangements. This is non-negotiable, and is part of the corporate social responsibility we should fulfill and honor, and hope that all employees would show understanding where individual demands fail to be fully met."

A special committee was set up for liaison with government and property management, to coordinate better the deployment of funds, personnel and material.

Not only were all supplies and food provided, instructions were also given to follow through on demands for items of personal hygiene, sleeping bags, and disinfectants. Employees were called to exercise restrain and confront this "unexpected get-together" light-heartedly and proactively. 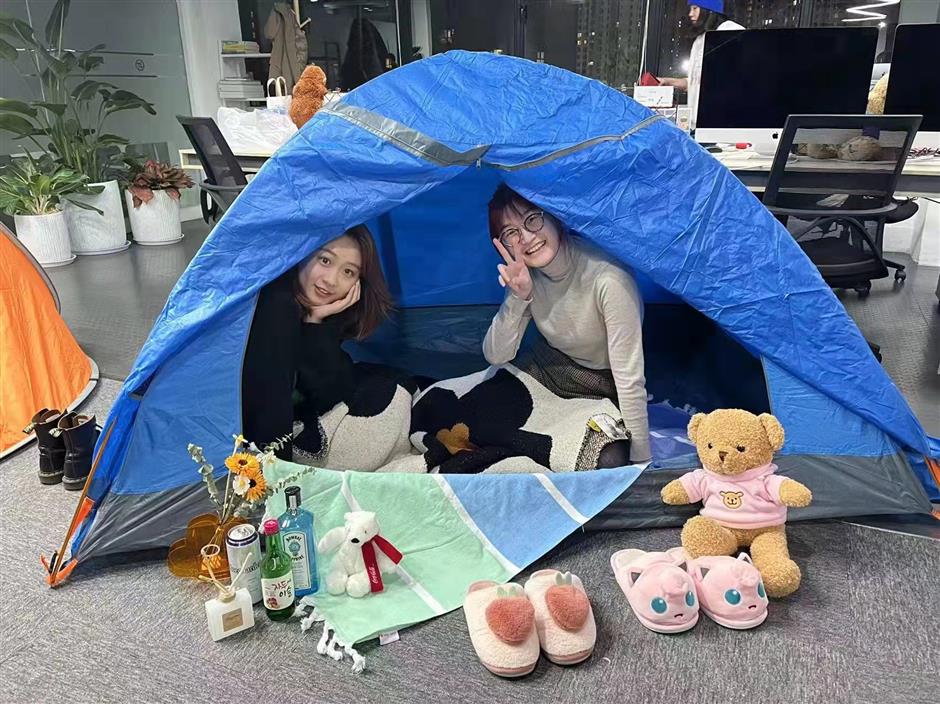 Camping at the office, Shanghai's unique response to quarantine measures.

Although neighborhood committee later supplied sleeping bags, bottled water, milk and rice, Zhu and her colleagues confined to the office were to a degree spoilt for choice since their colleagues at their Beijing headquarters had ordered plenty of food, fruits, drinks, and snacks to be delivered to them, including hotpots for Friday night.

As special treatment, females employees got to sleep in two conference rooms and reception rooms, while the male employees were told to rough it in their office. Zhu said she could sleep tolerably well, though she needed time to adapt to noises inevitable with so many people sleeping around.

But the mostly young employees showed their unlimited capacity for fun. For instance, employees were called to share their camping pictures to participate in a competition for "most beautiful camping."

On Sunday morning, the company lockdown was lifted, after all employees had tested negative the second time, though Zhu and her colleagues still need to stay at home for 12 days, having their temperatures checked and reported daily.

It was probably worse being locked down in a UNIQLO store, on Nanjing Road W.

But even in this case, responsiveness to the necessities of the affected is important, and voluntary, spontaneous displays of good will can go a long way toward lifting the spirits of the affected.

A WeChat moments post screenshot shared by one of my colleagues is informative.

The post observes that: "Some of the customers and staff got locked down in the (UNIQLO) store, which is not far from our store. Thus I told our workers to send immediately some newly baked pizza, chicken nuggets, and drinks to those locked in, and those who work overnight to institute the lockdown. It is delightful to see all our things being taken in! Everyone has been working hard, and we hope the food might make this cold winter night warmer."

Under this description are several pictures featuring the mentioned food.

From those who responded to this post we could see that sleeping bags have also been provided. One even claims that sanitary pads are also available to the needy.

As I overheard from one local resident recently, when an area is pronounced risky and marked for lockdown, the mandate will be executed with precision and rigidity that borders on "ruthlessness."

"If you happen to be on the wrong side of the demarcation line, even if by an inch, you will be subject to lockdown," the man said. But his female companion explained helpfully that exactly in this implacable attitude might lie the answer to the city's stellar containment record.

It might feel a bit chilly to be confined to locked down venues in some of the coldest day since winter set in, but the rigorous control measures are more than tempered by warmth of solicitude, on the part of government and volunteers alike.

In a city known for its delicacy management, with its fastidious attention to details, sometimes attributed to southerners' resilience and adaptability, this quality management style makes the city the frequent object of unadulterated admiration, especially from other large cities where the management falls short of similar excellence, particularly in term of pandemic control.

As a matter fact, this excellence has found eloquent expression in the city's COVID-19 controls, when restrictive measures are adopted with surgical precision, resulting in minimal disruptions to routine life.