Genius bipolar disorder patient pulls at the heartstrings of many Chinese

A letter from Jin Xingyong, about his genius son, who suffers from bipolar disorder, originally published in Hangzhou Daily on Monday, has drawn much attention.

The 86-year-old father told Hangzhou Daily that when his younger son Jin Xiaoyu, 50, who was taken to the mental health center during a recent relapse, returned home, they received the sample of his translation of "The Correspondence of Walter Benjamin," due to come out next month.

Xiaoyu told ThePaper.cn that he had never thought of making a living by translation. It helps to bolster him mentally. He loves to listen to the radio to achieve inner peace in his daily life.

Currently he is engaged in translating "Arcades Project," also by Walter Benjamin, which runs to more than 1,200 pages. He has already done around 400 pages of the book expected to be finished in two to three years.

"I hope that I can finish it before my father's 88th birthday," Xiaoyu said. "Then, I will stop the translation, and learn Spanish, by myself." 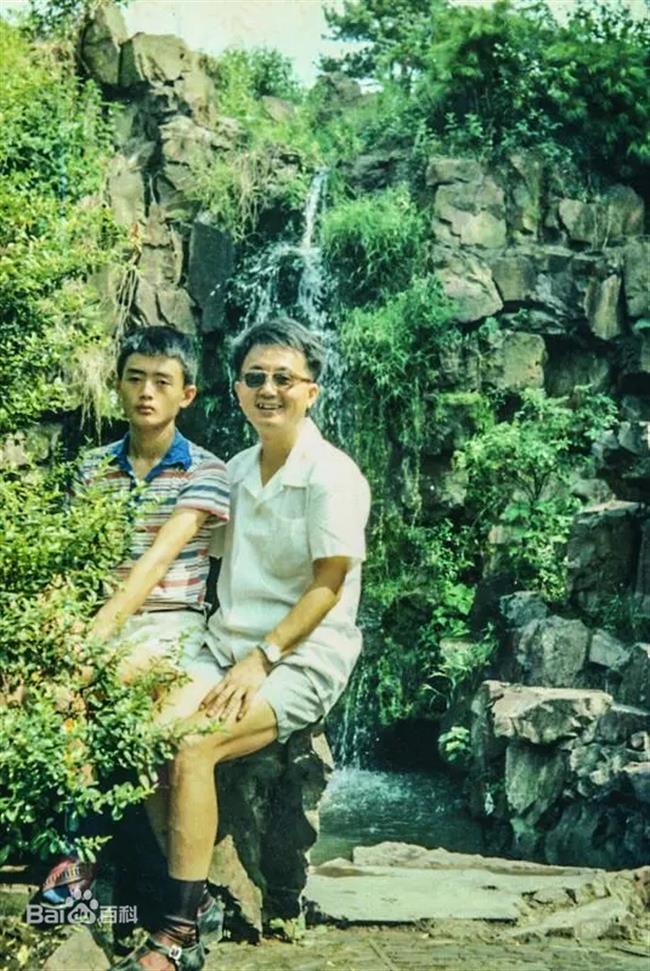 Needless to say, Xiaoyu is grateful to his parents, especially now his father since his mother's death in November.

"It's hard for me to say this in so many words, but I'm deeply attached to my father," Xiaoyu said. "He helps me with everything, he is like an assistant, proofreader and an agent all in one. He thinks much for me and is like my spokesperson."

Xiaoyu says his mother Cao Meizao helped design his life with foresight: "I could not integrate well into society, like going to school or work. So translation was a natural career choice. But I could not have made it without my mother's help."

Jin Xingyong had never expected so much attention from the public. "There are many children like my son actually. Their plight needs to be addressed, and they need to be encouraged by the public," he insisted.

Many people offered to help or donate money but Jin refused. He just wanted to tell his son's story.

All he wants is to give Xiaoyu company so that they can support each other. Although their community has contacted a foster home of disabled persons for them, the father is worried about Xiaoyu staying there alone.

"The community is trying to find a welfare house or nursing home near the foster center, so that I can take care of Xiaoyu in the daytime," Jin revealed.

Shanghai People's Publishing House is the publisher of "The Correspondence of Walter Benjamin," which runs to 400,000 words. The publisher told Jiefang Daily that it will publish the book as soon as possible. 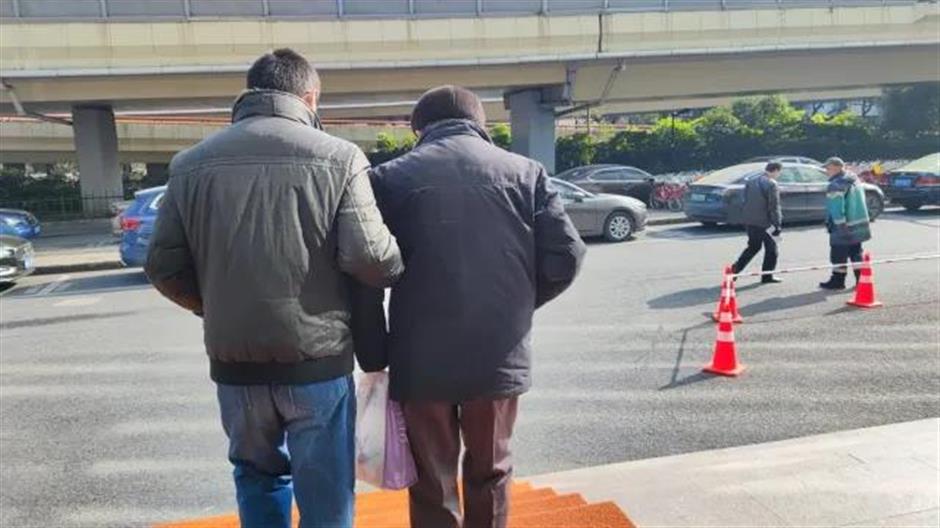 Jin Xiaoyu (left) and his father

A mystifying and romantic view of bipolar disorder counterproductive

According to the World Health Organization, bipolar disorder typically consists of both manic and depressive episodes separated by periods of normal mood. It was known as manic depression before and affects about 45 million people in the world.

Bipolar disorder is one of the three most common mental disorders. World Bipolar Day is celebrated on March 30 annually.

"The symptoms are paroxysmal. There will be a relapse if the patients don't receive systematic treatment, have drug adherence, or have lived in a terrible environment," Chen Zhimin, a doctor from Shanghai Mental Health Center told Knews.

Chen said that Xiaoyu recovers well mainly because of his family's support.

During the manic phase, patients feel very happy, and are full of energetic, ambitious plans and ideas, or would splurge on something.

Many creative celebrities, among them Van Gogh, Ludwig van Beethoven, Winston Churchill and Ernest Hemingway, were known to have suffered from bipolar disorder.

Chen Mengyuan, a mental health social worker, told Knews that some patients do exhibit unusual imaginative power, though many of her patients' families are concerned that playing up the "genius" could be counterproductive, and prevailing impression of "being talented" could sometimes be attributed to survivorship bias.

Chen Zhimin agreed that much of it can be blamed on public ignorance of bipolar disorder.

"Cognitive bias inclines the public to either romanticize or stigmatize," he said. "The disorder might affect in a positive way, but the dominant reason for Xiaoyu's achievements is his diligence and concentration."

Chen Mengyuan also called for support from patients' families and communities. As for society, she said a friendly public opinion environment and normal treatment are conducive to the patients' convalescence. 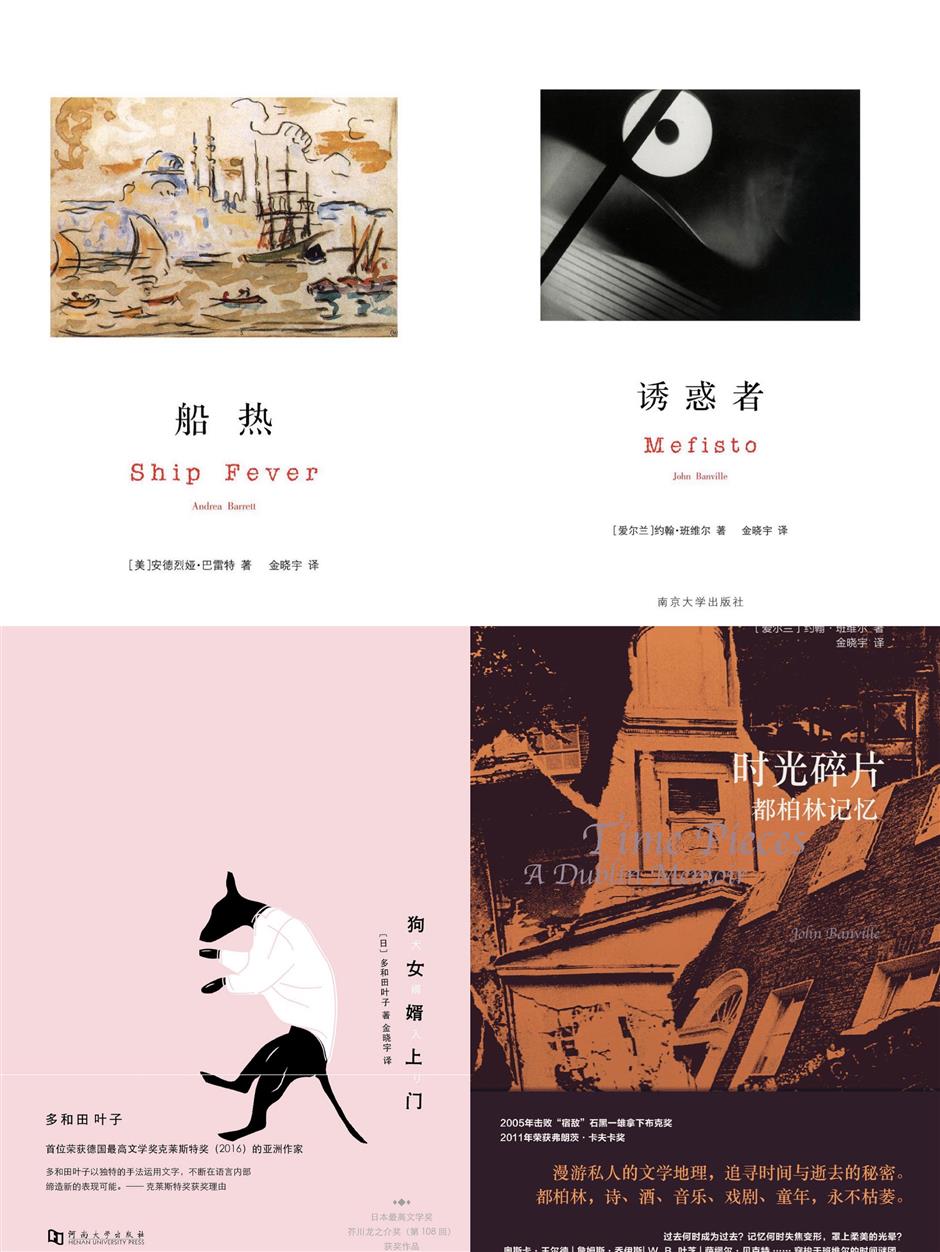 Four books translated by Jin Xiaoyu: "Ship Fever," "Mefisto," "The Bridegroom was a Dog" and "Time Pieces: A Dublin Memoir."

The copy desk of Hangzhou Daily received a cryptic phone call – from a funeral parlor – on November 11.

"Can you write about my son? He's a genius who has just lost her mom," 86-year-old Jin Xingyong said. "He is in the mental health center at the moment."

The genius turned out to be the old man's second son, Jin Xiaoyu, a translator well versed in English, German and Japanese.

Explaining the sudden call, Jin added, "If I die one day, no one would know about our son."

Jin Xiaoyu was born in 1972. His life took a sudden turn when his left eye was blinded in an accident when he was 6 years old. In subsequent years, he was diagnosed with manic depression, professionally known as bipolar disorder.

The following story was narrated by the father, Jin Xingyong.

I and my wife Cao Meizao have known each other since our childhood. After college, we worked in Tianjin and got married in 1967. We had a son, Jin Xiaotian, who was followed by another son, Jin Xiaoyu, in 1972.

One day, when Xiaoyu was 6, he was playing with a neighbor's kid, who had a top pistol that could fire shots made of paper. Tragically, that day the kid shot a needle, and it went straight into Xiaoyu's left eye, smashing its crystalline lens.

The boy, blinded in the left eye, could only view things by squinting, but he would try to comfort us by saying: "It's no big deal. I have got used to this."

After the accident, we moved back to Hangzhou, near our hometown Jiaxing, in 1984.

My elder son Xiaotian was enrolled in Fudan University, and then went to Australia. Xiaoyu had been equally brilliant in studies, until one day, when he abruptly said to us that it would be impossible for him to enter college, and he wanted to drop out of senior high school.

I thought this was a casual remark, not knowing he meant what he said and would stay at home.

I found two jobs for Xiaoyu, first at a bookstore, and then a ventilator fan factory. He was fired by the bookstore less than two months later, for starting a quarrel with a customer. He refused to go to the factory after the first couple of days, saying the colleagues there treated him unfairly.

He became unstable after he stopped going to school. He would be in bed when we left for work, and we would still find him there on returning home. He became irritable and unsteady.

One day, I was watching television with his mom, when, without warning, the refrigerator came crashing down. That was the first sign of violence. He would throw a tantrum for no reason at all, with many of our home appliances and furniture taking the brunt of his anger.

Then one day, to our delight, he said he would sit for the college examination. We sent him to a cramming school, and after a few months there, his marks were just three points less than what was required for key universities. He should have been admitted to the Foreign Language Department of Hangzhou University, but was rejected for his lack of discipline and absenteeism at high school.

He entered Shuren University, but left one year later, after showing signs of instability. 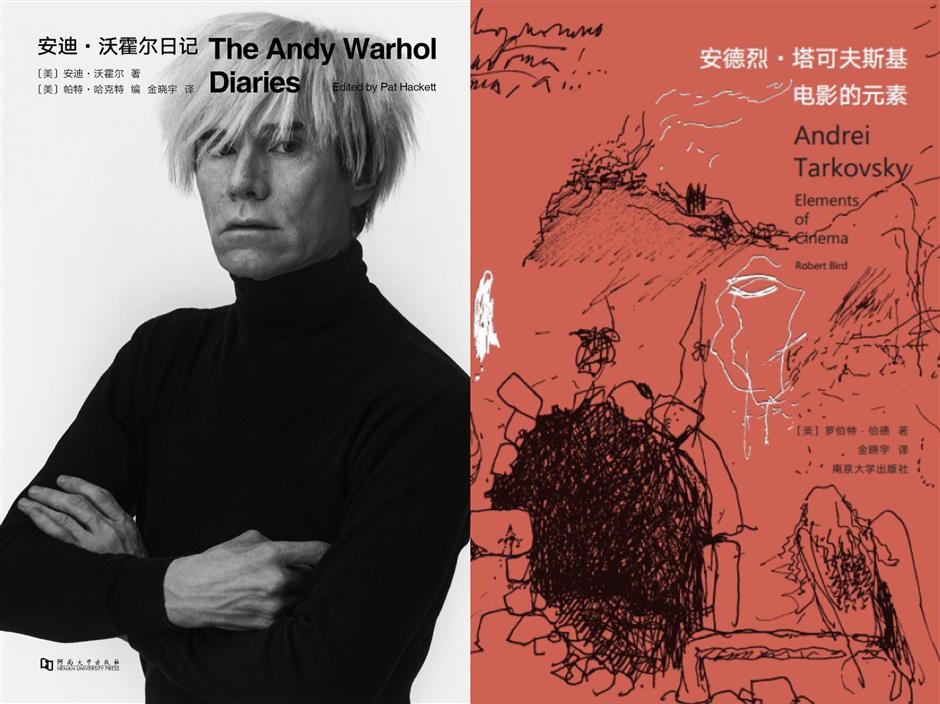 While at home, he studied really hard. He successfully completed all subjects required of the English major through self-study, in two years.

Then he attempted suicide, twice, by taking sleeping pills and trying to hang himself.

Xiaoyu was diagnosed with "bipolar disorder," commonly known as manic depression, with alternate exhibition of symptoms of mania and depression that were sudden and could not be managed by medicine alone. So since 1992, he has been sent to a mental health center immediately after an attack, almost every year.

I have been buoyed by two findings in my subsequent studies of the disease. First, after the first suicidal attempts these patients would give up further attempts altogether, cherishing their life with a vengeance, and, second, some would show remarkable creativity in pursuits in the spiritual sphere.

I felt relieved. Xiaoyu would be safe.

Languages calm him down

I came across an American book titled "Manic Depression and Creative," which enumerated no less than 25 talented artists who had been suffering this disease all their life, among them Beethoven, Issac Newton, Van Gogh and Ernest Hemingway.

Xiaoyu began to stay at home from the 1990s. Although our family had to sustain a huge financial burden, I tried to meet his needs.

He has displayed wide interests, ranging from reading, including English, Japanese, ancient Chinese, go, music and painting. I bought a computer for him in 1993, which was mainly used for learning foreign languages and watching foreign movies in their original language.

He would watch one movie multiple times, covering the subtitles with a slip of paper, trying to grasp the meaning in the original.

Xiaoyu is also a patron of the provincial library, claiming he has read all the fiction books in foreign languages.

These books and movies help calm him down.

In 2010, my wife, who had graduated from Nanjing University, participated in an alumni activity, where one of her classmates, a professor at the university, after learning of Xiaoyu's predicament, asked him to do translation work at home.

This was his first published translation, and there was no stopping him.

In the next 10 years he had rendered 22 books, totaling 7 million words, to critical acclaim.

To ensure accuracy, he would spare no time on research and double checking.

While engaged with "The Bridegroom was a Dog" by Yoko Tawada, he watched sumo matches every day.

"Andrei Tarkovsky: Elements of Cinema" by Robert Bird is highly specialized. To have a better understanding of Tarkovsky, Xiaoyu watched all his movies.

I also do my bit by way of helping him. I bought a scanner and printer and do the proofreading for him, though he works much harder.

A director of the editorial department said that all the staff wanted to edit his translation, in view of its quality and popularity.

Yet, he remains unstable. After experiencing a relapse recently, Xiaoyu was sent to the mental health center again.

After my wife's funeral, as I walked out of the funeral parlor on the morning of November 11, I decided to make a phone call to Hangzhou Daily.

I believe that Xiaoyu will come back in spring. He will read the new book to his mom.

(This article is originally published in Hangzhou Daily on January 17. Lin Lixin translated it.)