The Beijing Winter Olympics have already had their fair share of stars, chief among them Chinese snowboarder Gu Ailing. But beyond the icy sporting arena, the Games mascot, a panda bear named Bing Dwen Dwen, has become a "top icon."

When Shanghai Daily inquired with the Olympic official online store on Tmall on Wednesday, it was revealed that all peripheral products related to Bing Dwen Dwen were out of stock.

The Bing Dwen Dwen keychains are out of stock on Tmall.

The Games organizers have promised to increase the supply of Bing Dwen Dwen to meet the surging demand for the cute mascot.

They also unveiled a Chinese New Year edition of Bing Dwen Dwen dolls. It began pre-sale on Wednesday at the Tmall store and will be shipped within 30 days after payment.

The special-edition Bing Dwen Dwen, dressed in traditional Chinese festive clothes, is 230-millimeter tall, weighs about 200 grams and has a pre-sale price of 180 yuan.

To avoid hoarding, each customer is allowed to buy only one doll. 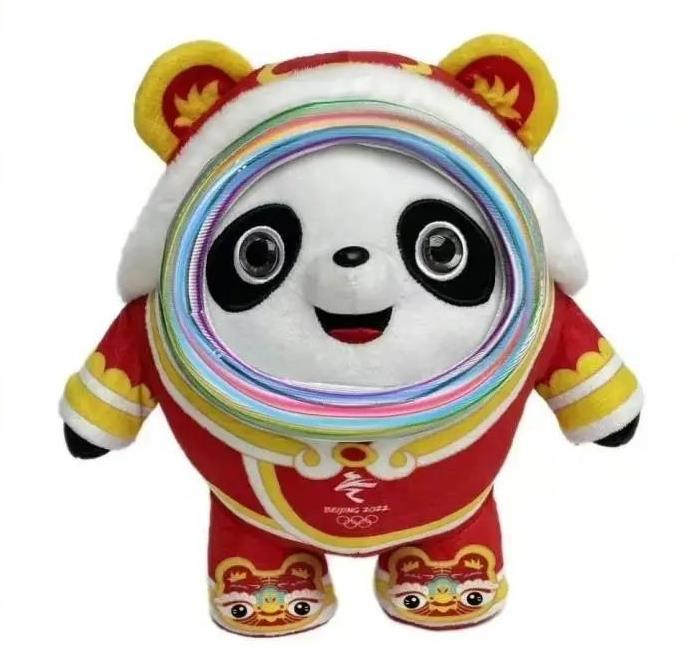 Scalpers have obviously started to cash in on the popularity of Bing Dwen Dwen.

According to Shanghai media reports, some scalpers, who normally peddle Shanghai specialties, are selling the Winter Olympics licensed goods on WeChat at exorbitant prices.

As for whether the goods are genuine, the scalpers claimed: "The goods are shipped from Beijing, where people queued up for several hours to purchase them from licensed stores."

The Games organizers also reminded people not to buy Olympic souvenirs from scalpers, and noted that the licensed merchandise will be available until at least the end of June.

Manufacturers of Olympic merchandise have seen an increase in orders, although the tight supply of mascot souvenirs is in part attributed to the shutdown of factories during the Chinese New Year holiday.

The three Bing Dwen Dwen manufacturers in China are based in Beijing, Jinjiang in southeast China's Fujian Province, and Nantong in east China's Jiangsu Province.

The three factories have all resumed production after the Spring Festival holiday, the Jinjiang plant reopening earlier than usual, Chinese media reports said.

The Jinjiang factory has received new orders for 500,000 Bing Dwen Dwen goods, and based on its current daily production capacity of around 4,000, it will take four months to meet demand.

The Nantong factory's chief said its product, 10cm plastic Bing Dwen Dwen handicraft, will return to online sales faster than plush toys because they are easier to produce. 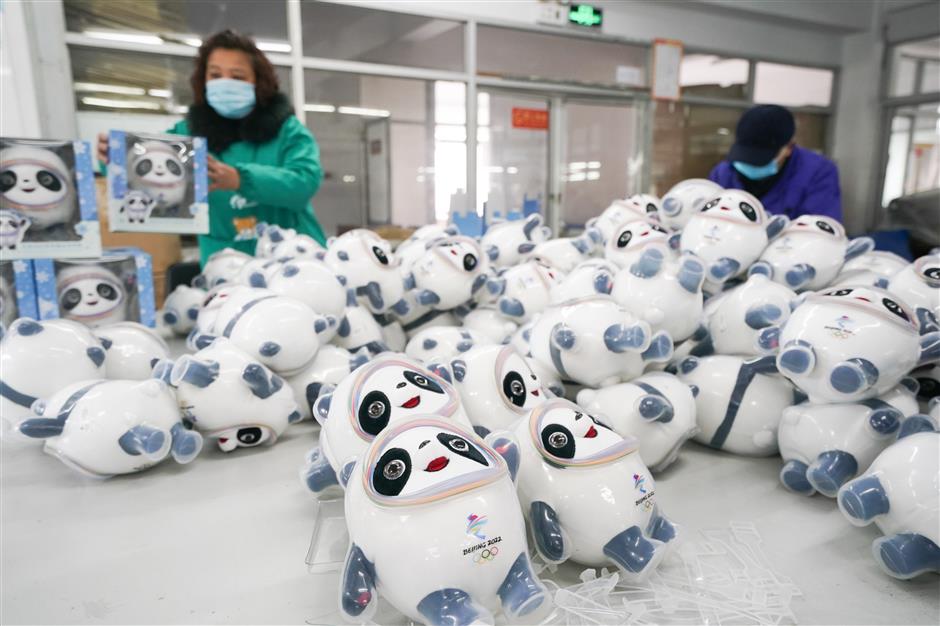 The mascot was a creation of southern designers

Shan Jixiang, former curator of the Palace Museum, believes the popularity of "Bing Dwen Dwen" is inextricably linked to the success of the Winter Olympics opening ceremony, which reflected the people's heartfelt love for the Games.

Shan fully recognized the design of Bing Dwen Dwen, which he praised as "very good."

Surprisingly, the design for Bing Dwen Dwen, which was selected from 5,816 mascot design proposals, came from the imagination of a group designers from south China, where it is rare to see snow and ice.

"The children who have never seen ice and snow have a richer imagination," a proud Liu Pingyun, associate professor of the Guangzhou Academy of Fine Arts and chief executive of the Bing Dwen Dwen design team, said in a media interview.

Liu described his childhood memories of the north as icy skies and bingtanghulu (crispy sugar-coated haw). When the Beijing 2022 invited applications for mascot designs, he was inspired by the bingtanghulu idea. 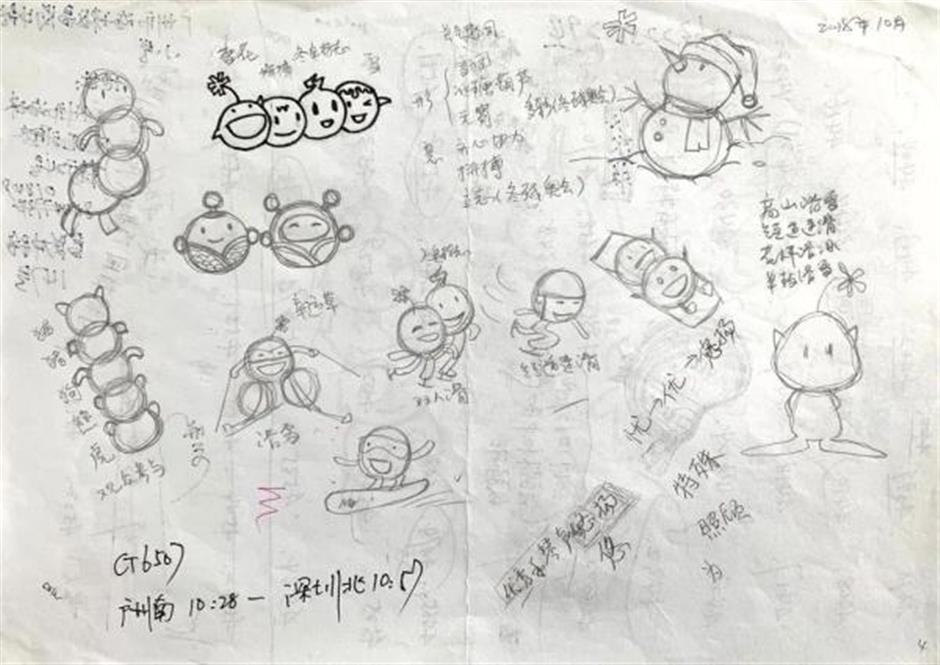 The design team, however, began a seven-month revision process. They kept the ice shell of bingtanghulu but thought it was "not very weighty" to present the country's image in a bingtanghulu.

They tried to replace the characters under the ice shell with animals such as tigers, rabbits or moose. Bing Dwen Dwen was finally chosen after thousands of revisions.

According to Liu, Bing Dwen Dwen is different from previous panda mascots in that it combines traditional cultural heritage with new technological breakthroughs and innovations in the new era. 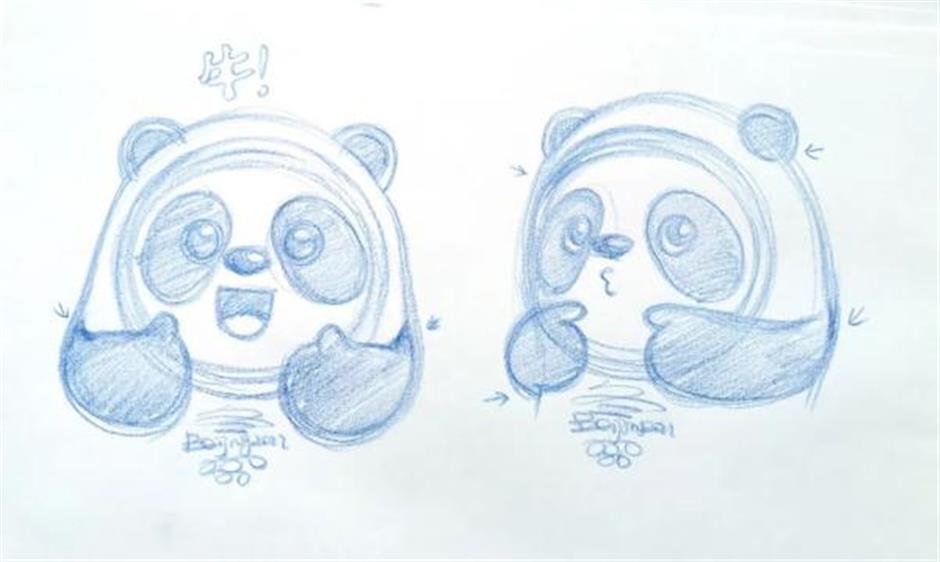 A draft of Bing Dwen Dwen

"We set 2022 as the future. With a sense of technology in the world, we added 3D technology and some elements of the 5G era to make it contemporary, which formed the shape of Bing Dwen Dwen with contemporary significance today," Liu said.

The huge popularity of Bing Dwen Dwen has caught Liu by surprise. He said the mascot is adored by both Chinese and foreign friends, demonstrating Chinese culture's infectious power and allure. Bing Dwen Dwen, as a goodwill ambassador, conveys the concept of virtue and friendship and represents China's current trend.

Nobody can resist the lovely Bing Dwen Dwen, which demonstrates to the world the unique snow and ice romance of Chinese people.