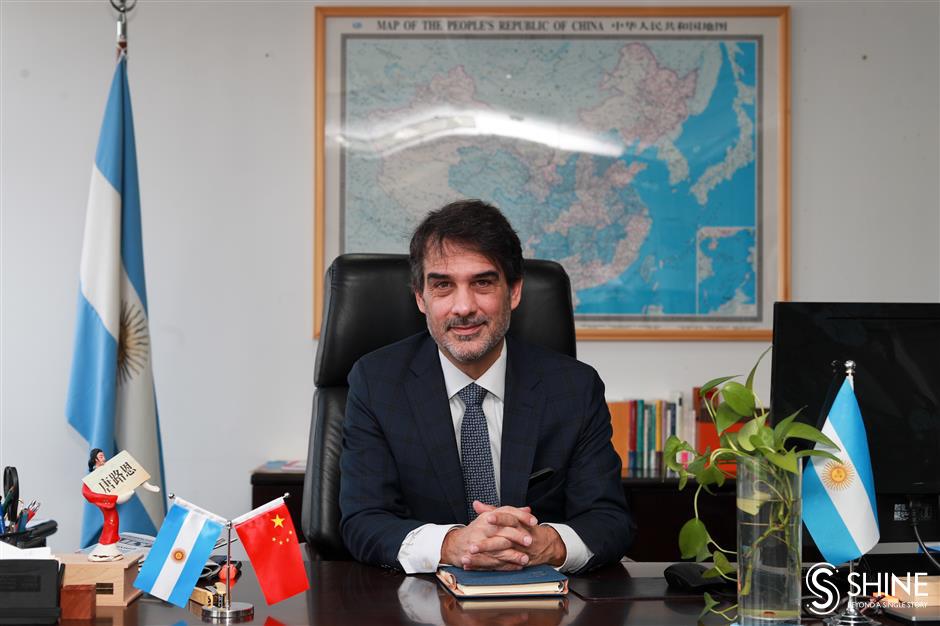 Luciano Tanto Clement, the Consul General of the Argentine Republic in Shanghai, has an interesting anecdote on the figurative links between the city and his South American nation.

"For instance, if you go to People's Square and start digging a hole in the ground deep enough, you will reach Argentina. This is well-known among my fellow countrymen," he claimed.

Despite working in a city farthest from his hometown of Salta City, Tanto Clement says the distance has not affected him.

Reflecting on half a century of Argentina and China walking hand in hand, he stated that the connections between the two countries existed even earlier than 50 years, and "so as far as I can see it, we are not as far away as a map informs us."

Tanto Clement first visited Shanghai in 2013. Impressed as he was then, the Argentine said the city was more imposing when he returned as Consul General because "it was totally different from eight years ago."

"They say you can be impressed the first time you come to China, but it's even more on the second visit because you can make the comparison. And this explains my feelings for Shanghai."

In the interview with Shanghai Daily, the CG shared his views on the Sino-Argentine friendship, and the ties between Argentina and Shanghai. He described President Alberto Angel Fernandez's first trip to China earlier in February as a great success, and Shanghai as one of the world's windows, the gateway to China.

SD: What is your take on China-Argentina ties over the past 50 years, and what are the next steps in bilateral relations in your opinion?

CG: The coming 50th anniversary of the China-Argentina diplomatic relations is an excellent opportunity to think about what brings us together in the first place.

Historically, leaders of both countries forged a relationship that predated formal diplomatic relations. Former President (Juan Domingo) Peron wrote a letter to Chairman Mao in the 60's. Both countries shared from the onset of their diplomatic history a common worldview and both participated in the Non-Aligned Movement. So the link was already there.

A turning-point of our bilateral relations happened in 2004, when both countries agreed to launch a "Strategic Partnership." After that, our political and economic ties became much stronger. Ten years later, when we upgraded our relations to a "Comprehensive Strategic Partnership," the aim was to diversify the fields of cooperation and deepen our understanding. And now, President Fernandez's visit can be seen as a natural development of this recent events and logic.

We are eagerly looking forward to the easing of (pandemic) travel restrictions so that we can shrink the map even further through people-to-people exchanges.

SD: During President Fernandez's visit to China, Argentina and China jointly announced the establishment of a soccer school. Could you please tell us more about it?

CG: It's part of a project, the Argentina-China International Football Academy. It will be developed in Yulin, Shaanxi Province, and include the construction of football fields and all necessary accommodation facilities for teachers and players.

Teachers include both amateur and professional coaches who enjoy working with children. I believe that bringing in Argentinians to guide how we deal with football, how we think, and how we teach our children is more important than having a place to play. Because we understand that introducing sports at a young age is critical.

In fact, we usually cooperate with the China Argentine Football Fans Association, particularly since the passing of soccer icon (Diego) Maradona. President Xi can be counted as one of the Chinese fans of Maradona.

SD: You began your diplomatic career in 2000, and came to Shanghai last year. What were your feelings when you first arrived here?

CG: I was appointed Consul General last August. But I had been here during a 2013 visit of Argentina's then foreign minister. I worked directly for his office in those days. We participated in the 15th Shanghai Art Festival, that was held at the Jing'an Kerry Center.

The first time you visit Shanghai you are impressed, but even more so on your second visit. For instance, in 2013 there was no Shanghai Tower!

SD: How many Argentinians live in Shanghai? What work do they do?

CG: Last year there were around 200, which used to be significantly higher before the pandemic and all the travel restrictions that followed.

They do a wide range of activities, such as entrepreneurs and representatives of Argentine companies, scholars and teachers, artists and dancers.

SD: What aspects of Argentina's culture and soft power would you highlight specifically?

We are one of the world's largest food exporters, and Argentina is the top South American destination for international tourists.

SD: What were your personal impressions about the China International Import Expo last year?

CG: Argentina is always eager to participate in such events. For us, this is a key pillar of our strategy to reach the Chinese market.

Last year, Argentina took part in the CIIE with a 400-square-meter stand in the food and beverage pavilion, where 30 Argentine companies showcased a diverse range of products, including wine, seafood, oil, and lemons. But we want to change it. We don't want to be only a food exporter, but also exporter of high-tech in key areas: satellites, nuclear reactors and agrotechnology.