At the ongoing Two Sessions in China, high-quality growth and rural revitalization are among the hot topics by national lawmakers and political advisers. The development in the Yangtze River Delta region has become a guide in this respect. Zhaoxiang, a town in Shanghai's suburban Qingpu District that is located at the heart of the YRD region, has attracted many aspiring entrepreneurs for its good natural environment and the environment for starting a business as well. 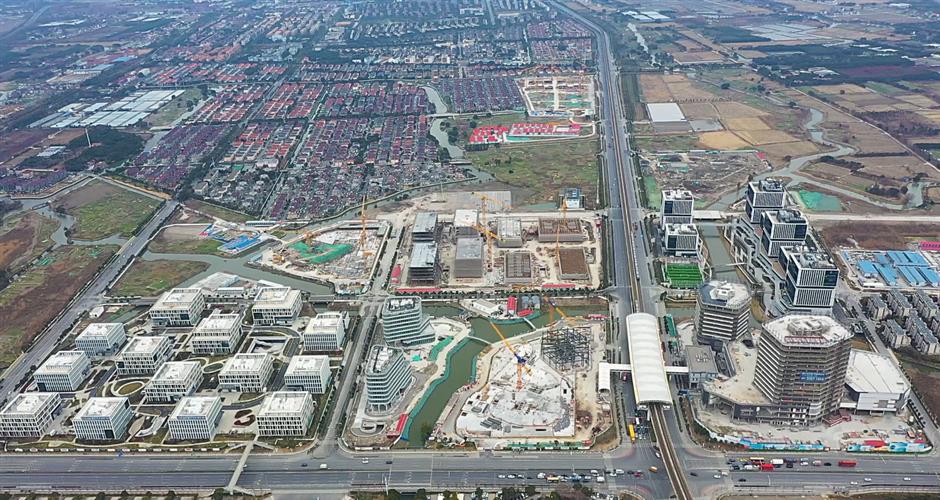 A bird's-eye view of Zhaoxiang Business Park in Qingpu District

And such pursuit of harmony between man and nature has never stopped.

In west Shanghai or a core area in the Yangtze River Delta region, more and more entrepreneurs are now choosing to work and dwell on modern yet tranquil suburbs.

One of them is Cui Yuwei, a man born in the 1990s who seems not likely to follow a trodden path.

Giving up the opportunity to attend Tsinghua University, he chose to join the Special Class for the Gifted Young program of the University of Science and Technology of China, where he explored the mystery of multiple disciplines.

Instead of landing a job at Internet giants like Facebook and Google, he chose to be a low-profile researcher at Numenta , a leading artificial intelligence company in Silicon Valley, after obtaining his doctorate in computational neuroscience from the University of Maryland.

Inspired by iRobot, an American technology company that launched the world's first vacuum-cleaning robot based on visual navigation in 2015, Cui began to think about the possibility of starting a business.

Two years later, he returned to China to "get closer to the market" and became chief technology officer of a startup company focusing on the development of home robots.

At the firm, he developed the country's first domestic vacuum-cleaning robot with a visual navigation function. 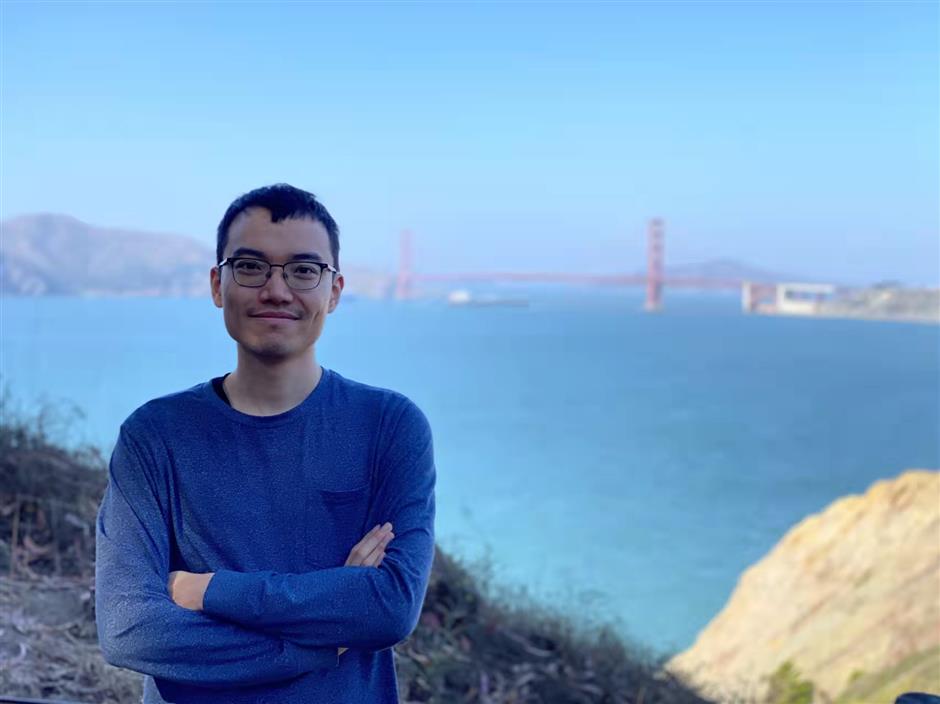 The unexpected COVID-19 pandemic, however, changed the young man's life journey and catalyzed his enthusiasm for doing another new business.

Keenly aware of the strong demand for commercial cleaning robots in public spaces, Cui decided to seize the opportunity.

In December 2020, he founded Sparkoz Technology Co, which offers smart solutions and robots for commercial cleaning.

"Passion and purpose will spark innovation, and we hope our innovations will spark more creative thinking within China's AI robot industry; that is why we named our firm Sparkoz," Cui told Shanghai Daily.

With the industry's first and only visual-LiDAR fusion based positioning and navigation system, the company's robot cleaners are easy to maneuver, efficient and affordable, he said.

Sparkoz's products are being recognized by the market.

At the fourth China International Import Expo held last November, an autonomous robot scrubber KIRA B65 from Kärcher Group, the world's leading provider of cleaning technology, proved to be a hit after a global debut.

Using Sparkoz's robotics platform, the robot can track thousands of landmarks simultaneously with its 210-degree camera and perform 3 trillion operations per second. 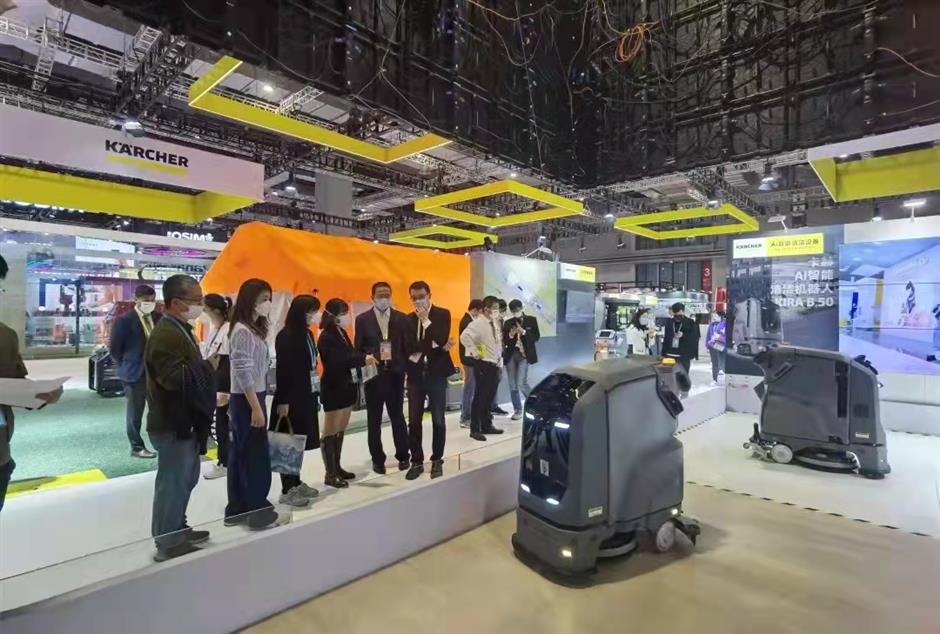 They are also in pilot use in some supermarkets in Suzhou, Jiangsu Province, while being used in Shanghai Railway Station and the ARCH Walk Mall in Shanghai's Changning District, according to the company.

After studying and working in several cities, Cui now regards Zhaoxiang, a town in Qingpu District, an ideal place to carry on his dream.

"The transport is convenient, the air is fresh, and most importantly, we can find the right talent here," he said.

He can drive from the Shanghai office to the company's Suzhou factory in about an hour.

Even though he is the chief executive officer, he has no set residence: He carries his sleeping bag and shares an apartment with his colleagues in case they have to work overtime. 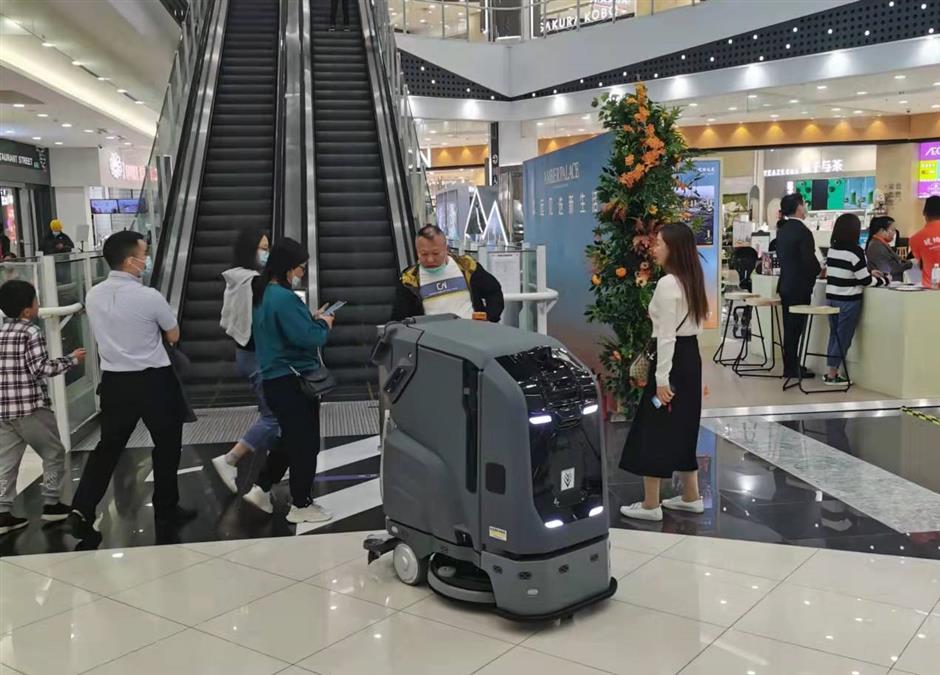 Sparkoz' robots do intelligent cleaning in a shopping mall in Shanghai.

Young people like Cui are lucky as Shanghai strives to become a global sci-tech innovation hub, with a series of favorable policies and infrastructure being rolled out.

The Yangtze River Delta High-Tech Park, also known as Zhaoxiang Business Park, is riding the trend to better cater to the needs of startups.

A member of the Yangtze River Delta Investment (Shanghai) Co, the park aims to serve the national strategy for integrated development of the region.

According to its blueprint, the park will be built on a land covering 328,000 square meters and have a total floor area of about 1 million square meters. It is gearing up to become part of a new generation of smart industrial cities that integrate businesses and offices, research and development centers, commercial centers, staff apartments and other amenities. 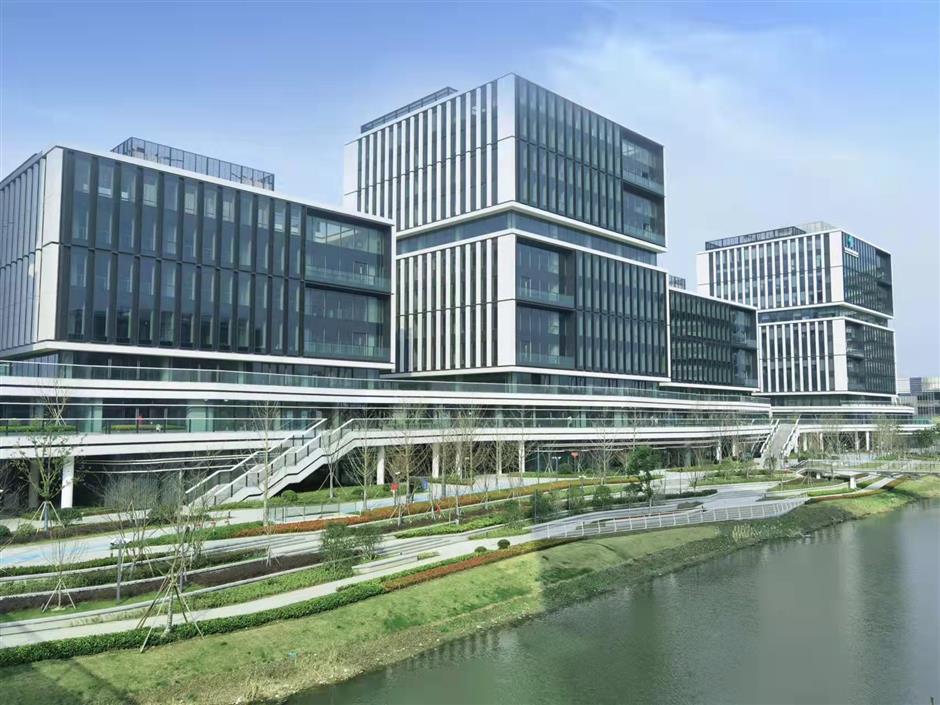 A highlight of the park is the Yangtze River Delta Innovation Center, which provides point-to-point incubation guidance for innovators across their full-cycle business with its 2000-square-meter makerspace.

Boasting a well-developed traffic network, the waterfront area takes full advantage of the original rivers of Qingpu, which creates a superb, relaxing environment for entrepreneurs and R&D staff.

The past year saw over 150 enterprises registered in the high-tech park, covering sectors like information technology, digital economy and green industries, according to Yangtze River Delta Zhaoxiang Emerging Industry Economic Development (Shanghai) Co, the operator of the park. 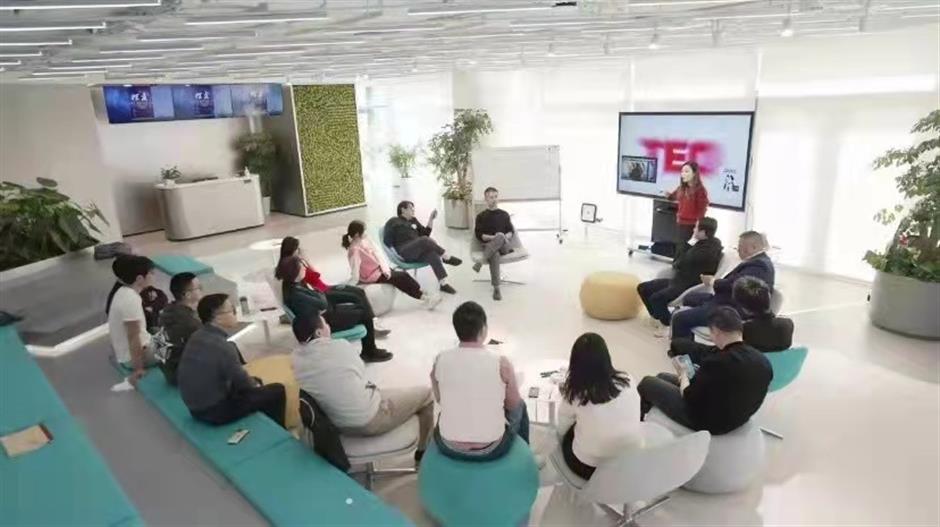 The charm of the park comes with the close cooperation and dialogue between the developer and dedicated architects.

With a focus on sustainability, they teamed up to create an ecologically responsible office park, with high quality pursued into each detail of façades, interior spaces, and landscaping.

"The environment we found were the canals, agricultural lands and wetland areas typical for the Yangtze River Delta region, and we immediately saw that this natural environment was a major asset of the project," Weiss still remembers her impressions when visiting the Zhaoxiang site for the first time. 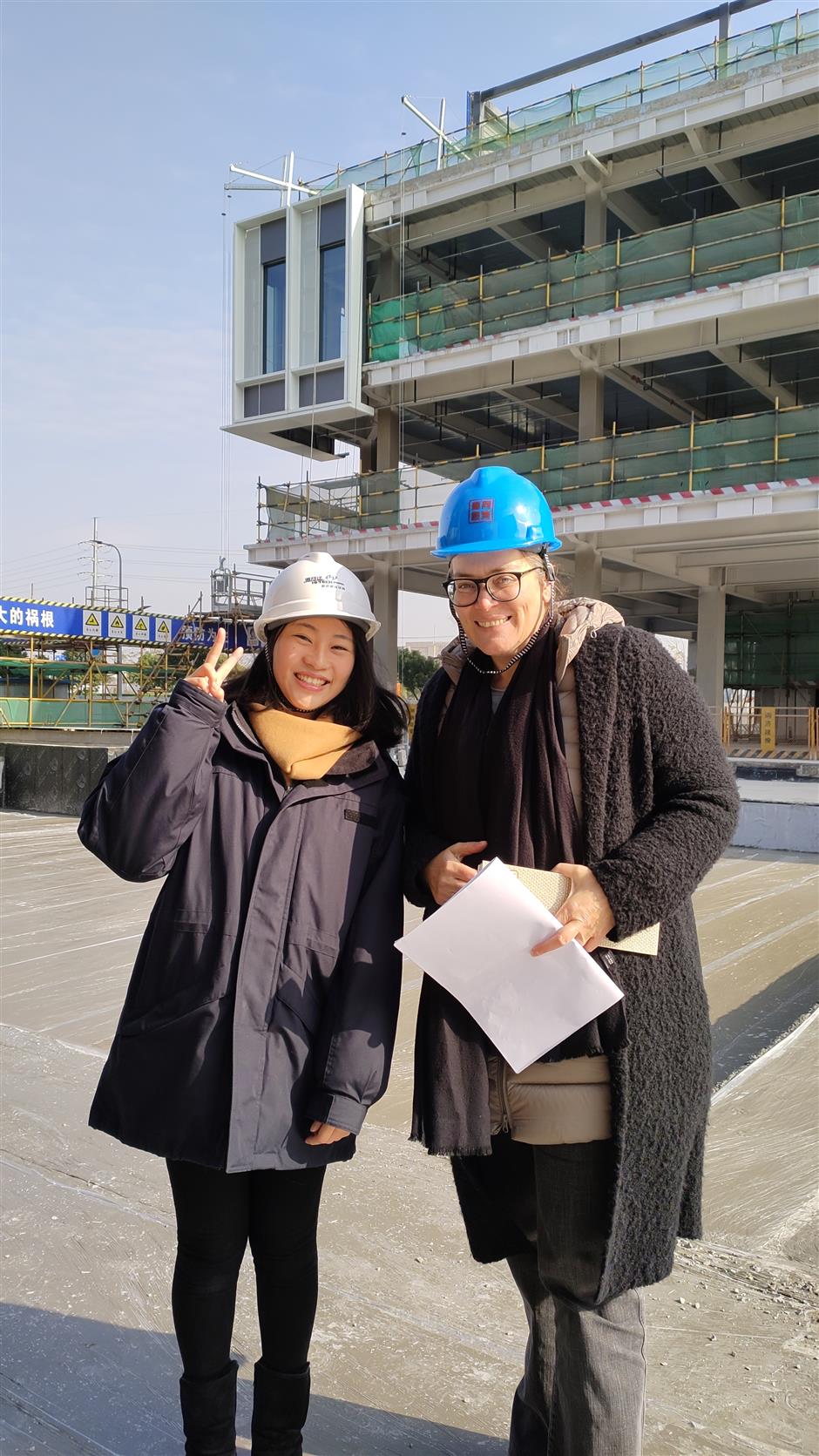 Cherishing much respect to the pristine nature, gmp designed low-rise office buildings with terraces on multiple levels and glass facades that open up to the park, which helps bring people closer to the waterways.

Also, the high-rise buildings are connected via bridges that provide views into the park, enhancing the feeling of working in an environment much closer to nature than in dense downtown Shanghai.

"In times of ever-increasing workload, enjoying a balance between work and leisure is extremely important for our health and well-being," said Weiss.

"And I think people will more and more do their choice where they want to stay," she added.

The prediction has come true. 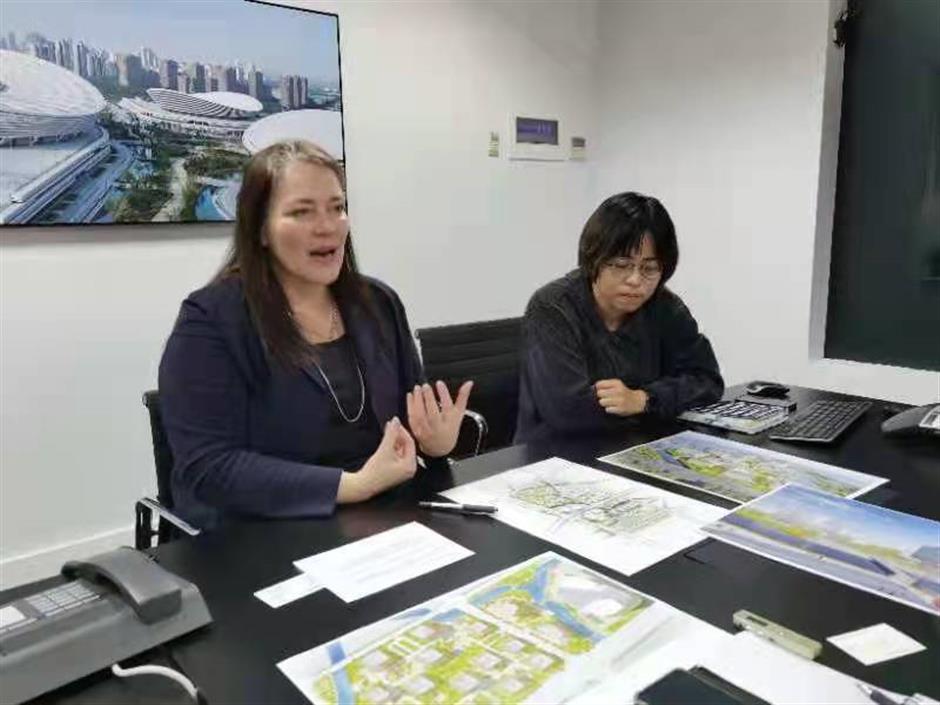 Weiss (left) presents the master plan for the business park in an interview at gmp Shanghai office.

Hu Bai, founder and CEO of ClickPaaS, a low-code application platform provider, made his choice in 2019.

Attracted by the natural beauty and serenity of Qingpu, he decided to move the headquarters of his company into Shanghai Western Software Information Park.

"As I see," he told Shanghai Daily in a recent interview, "it is better for the researchers to be away from the hustle and bustle and work in a small town like Zhaoxiang."

A seasoned expert in the software sector, Hu pioneered the implementation and promotion of Oracle cloud technology in China.

Thanks to his exceptional work performance, he was granted permanent residency in the US while working there a few years back.

At that time, the IT engineer noticed that there were more and more reports on new Chinese tech companies like Tencent and its online music entertainment platform QQ Music on major US media outlets like Bloomberg and CNN.

As such, he had the impulse to do something different.

In 2015, the 33-year-old man came back to China without the least bit of hesitation and at the expense of giving up his permanent residence in the US.

He wanted to build the Chinese version of Salesforce, a leader in platform as a service. 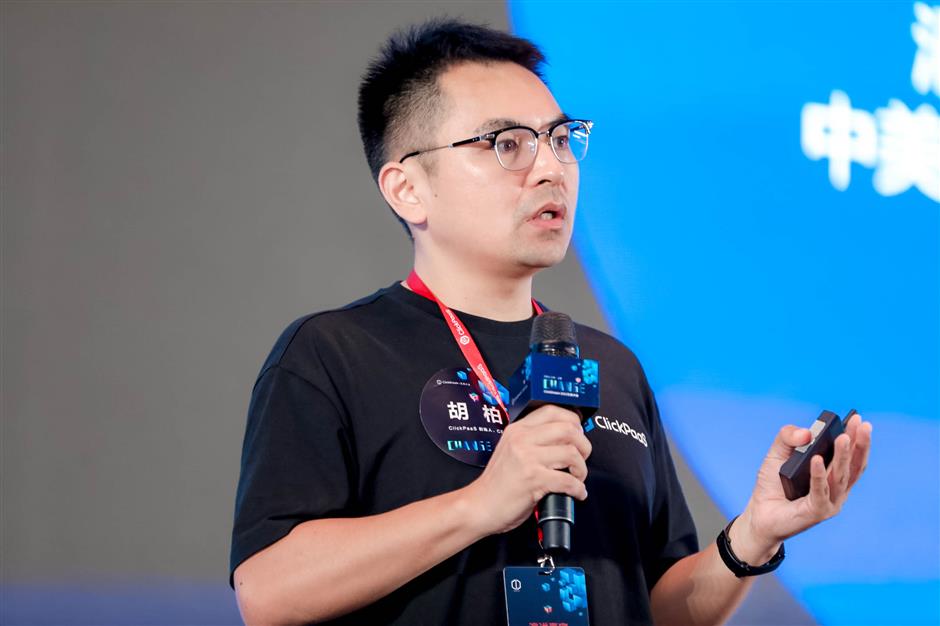 Platform as a Service or PaaS is a set of cloud-based services that enable business users and developers to build applications quickly and easily.

But things did not go as smoothly as he had planned, and reality gave him a strong shock.

"We assumed there would be a big market in theory, but it turned out that investors just didn't buy into our ideas," Hu said.

His savings soon ran out, and to navigate through the worst time, he sold an apartment of his in Shanghai.

The turning point came around 2018 when almost everybody was talking about PaaS in the circle of startups and ClickPaaS survived.

"You see, we didn't follow fengkou blindly; we were just waiting for the right wind to come," he said.

Literally meaning "in a strong wind," fengkou has become a buzzword for Chinese investors to describe an area or sector which has great profit potential after Xiaomi's CEO Lei Jun coined the term with his flying pig theory.

For instance, it helped a multinational company build its pandemic management system within one week during the first wave of COVID-19.

It takes 10 years to polish a sword, as the Chinese proverb goes. Hu said his company may go public in around three years, or 10 years after his return from the US.

Efforts will finally pay off: thanks to people like Cui and Hu, China saw another active year in the circle of startups, including funding for new business.

A total of 6,884 equity investment deals were made in China's new economy last year, involving over 1.37 trillion yuan (US$220 billion), a record high, according to a recent report by Beijing-based market researcher ITjuzi.

Among them, health care and AI were the two hottest industries.

Chen Zhong, Shanghai partner at Cowin Capital, an early-stage investor focusing on health care as well as TMT (technology, media and telecommunications) sectors, said startups with strong technical backgrounds have emerged in the past two years.

"We are delighted to see such a trend and we also love to bet on them," he said.

The Shanghai-based angels and venture firm ranks among the top 10 VC institutions in the primary deal-making market during 2021, according to ITjuzi's study.

Making an investment usually takes time, but Chen said they will pull out their checkbooks in two weeks as long as the startup is good enough.

Case in point is Jade Bird Display, a Shanghai-based manufacturer of microLED displays.

Last June, Cowin Capital invested in its Series A funding round.

"We do hope tiny, pioneering ventures will eventually transform into the next big thing, and what we can offer is research, strong convictions and patient follow through," the veteran venture capitalist said.

"It's like eating glasses staring into the abyss," said Elon Musk, co-founder of PayPal and Tesla, quoting a friend of his.

For ClickPaaS's Hu, people tend to have polar opposite reactions to starting a new business: either idealizing it or regarding it as unbearable and quitting halfway through.

"Starting a startup is neither paradise nor hell; it is just 'the human world,'" he said, hoping society gives more respect and tolerance to people who dream and think big.

Hu was grateful for the entrepreneurial experience, as it has taught him how to better understand himself.

In the next 10 years, he wants to manage his company better and become "a man of stories."