The violinist, the team leader and 'Green Onion Bro'

Having your hair cut accompanied by a live violin performance may sound extraordinary. But this is what occurred in a Shanghai neighborhood, with two videos of the event going viral.

Within hours, the two videos got more than 20,000 thumbs up, each, on the stylist's WeChat video account alone.

"I would have practiced for three days and nights if I had known it would be seen by so many people," Liu Lijie, the violinist, living in Jianshangxinhua Neighborhood, Changning District, told Shanghai Daily.

"I only wanted to express my gratitude to everyone in our compound, neighbors, management team and neighborhood committee, who helped each other and got us through the most difficult times together."

The "customer" is the management team leader Liu Bingqiang, who hasn't been able to go home for more than 40 days. The stylist, Su Ran, is also one of those who has helped.

Su, who has lived in Shanghai for many years, is now known as "Green Onion Bro" by his neighbors. In the earlier days of the lockdown, he bought more than 100 kilograms of green onions and garlic, some of the most "luxurious" grocery items at the time, to give out for free.

With the overall situation getting better in Shanghai, "Green Onion Bro" decided to host an outdoor hair salon in the neighborhood. After more than 40 days, many are desperate for a haircut.

Su and Liu Lijie didn't know each other before but had become familiar over the lockdown. Su, an amateur guqin performer, invited her to perform at his outdoor salon after learning that she has played violin since age 4. 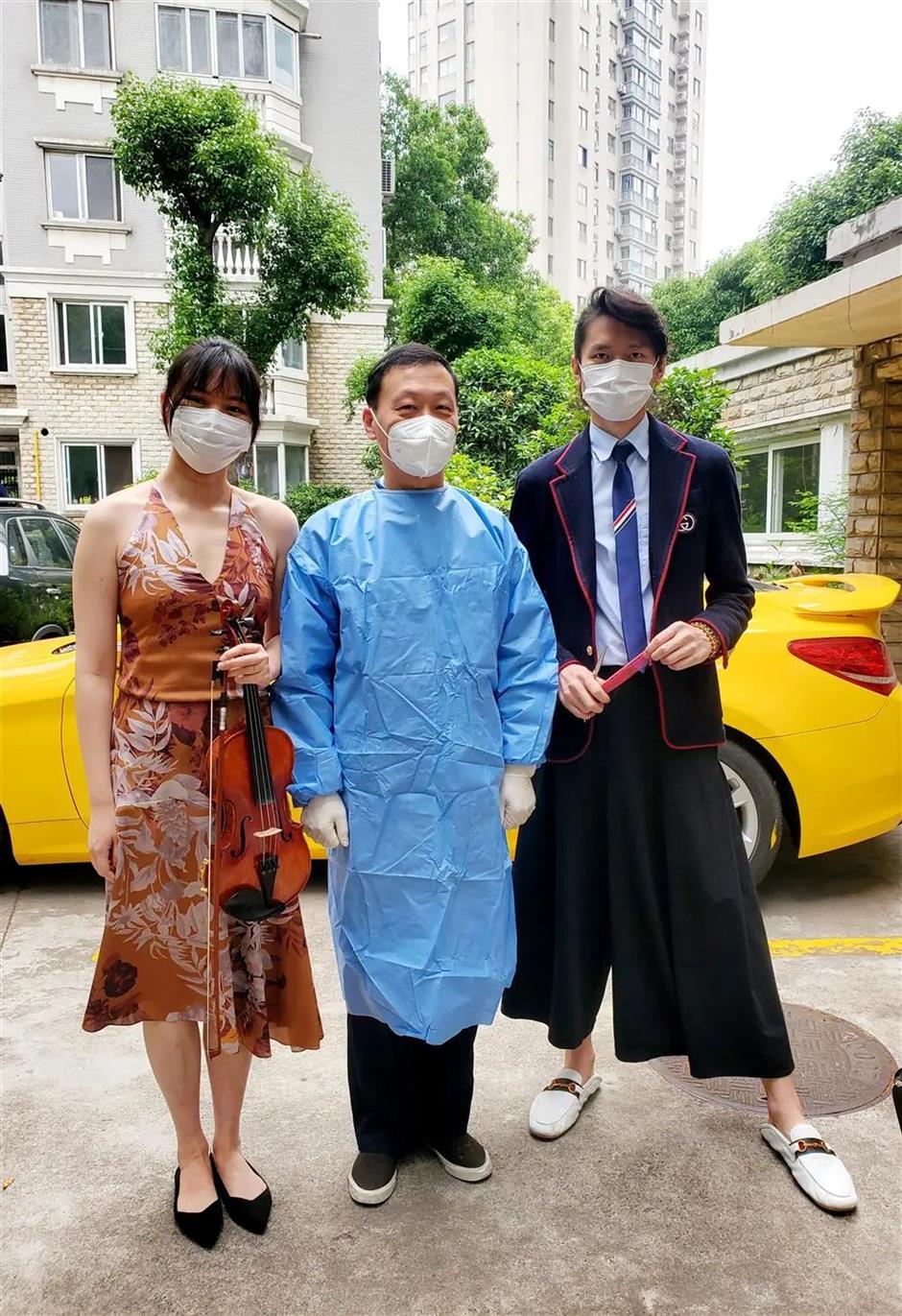 The 33-year-old works as admin in the outreach program at Shanghai Symphony Orchestra. Used to helping musicians from behind-the-scenes, Liu Lijie took center stage this time. She also dressed up for the first time since lockdown started.

"Su was doing haircuts for free for two or three days, with a dozen or so customers every day," she said. "I could see that he was tired but also enjoyed it. I have always wanted to do my part, contribute a bit, however little it is compared with what everyone else is doing.

"And most importantly, I want to make peace with myself, and make myself happy. And I did. Music is about passing on the love. I was helped, loved and I want to pass it on through music." 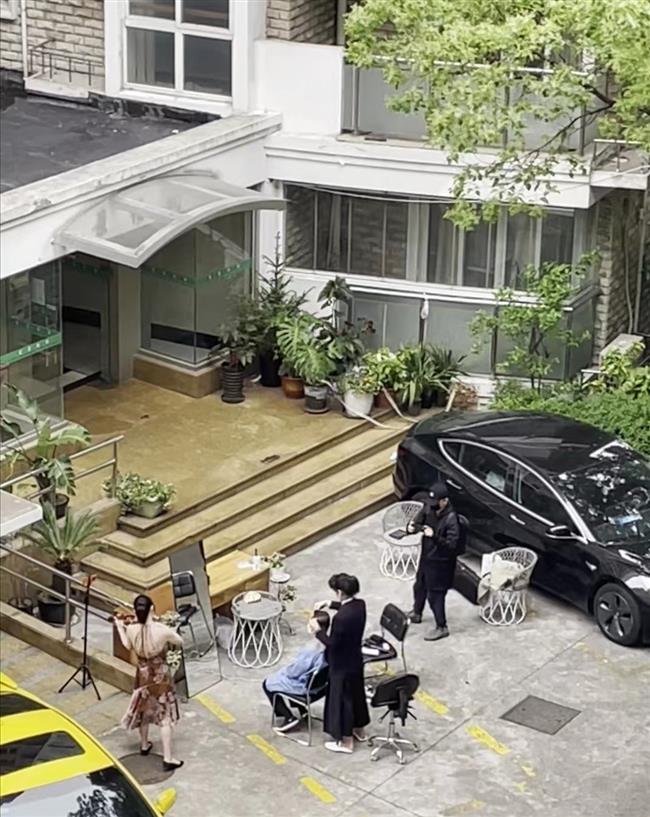 The stylist, who dressed in a suit every day in the outdoor salon, gave some suggestions on make-up, and Liu Lijie picked her favorite dress – one that she wore on her birthday last year.

She practiced the two songs a few times that morning, then went down.

Some of the top clicked comments under "The Lone Brave" said: "This is the Shanghai I love." "I can't help getting touched when the familiar melody starts."

The Mandapop song by Hong Kong singer Eason Chan was released in November as the theme for the animation "League of Legends: Arcane."

With its lyrics depicting extraordinary braveness, the song has often been used in association with content or videos about volunteers and medics fighting the pandemic. It has become one of the most frequently played songs across social media platforms in China in the recent months.

"I have got familiar with the song because my husband has performed it with suona (Chinese double-reed horn)," Liu Lijie said. "I always thought it would sound nice on violin and this was a perfect opportunity to do so."

She added it was also her gift to many friends who are medics. 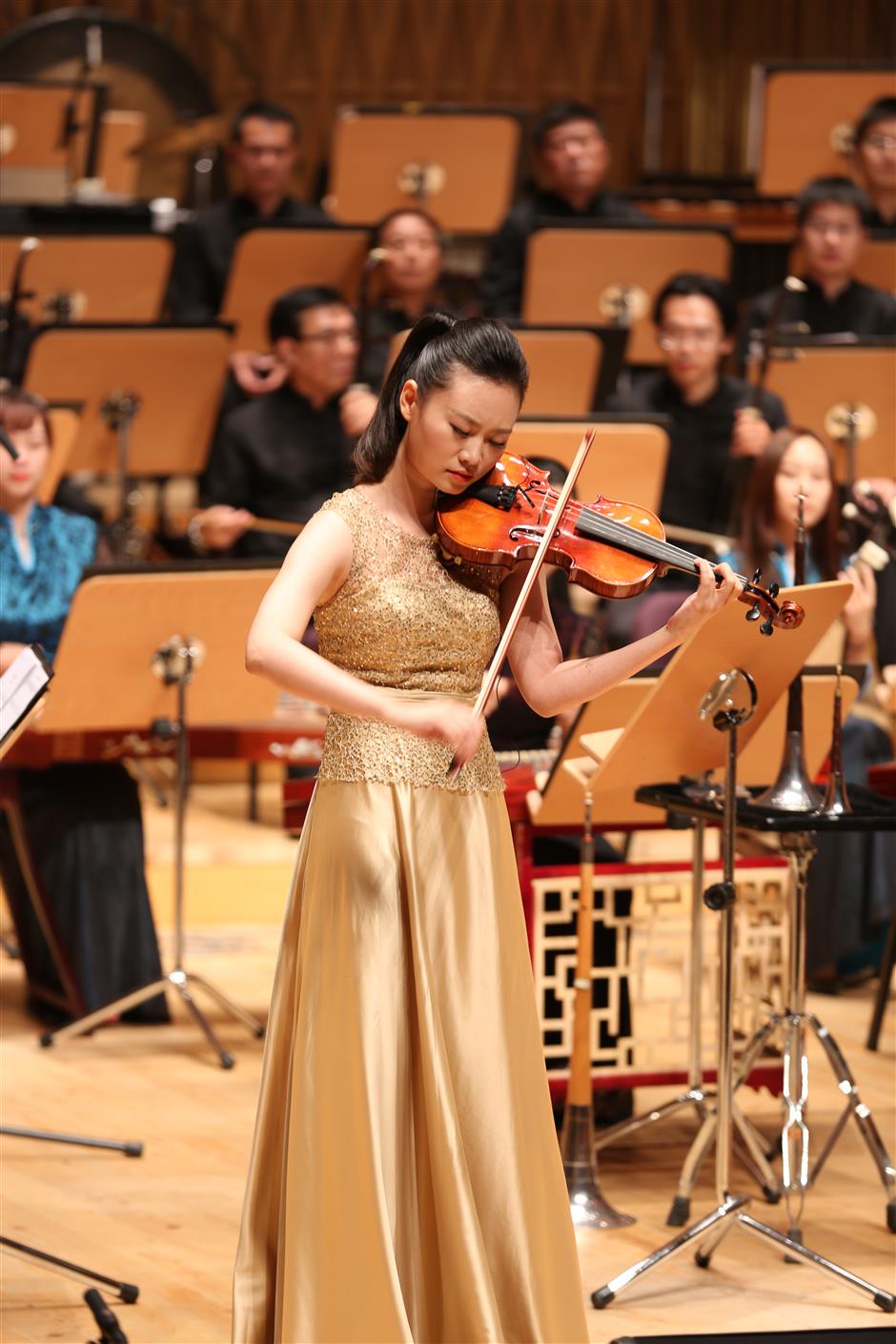 The other song she picked was "I Love you, China," a song from the 1979 film "A Loyal Overseas Chinese Family." The song has gained a life of its own outside the film with its romantic melody and poetic lyrics.

"I always liked the melody of this song," Liu Lijie said. "I'm not the type who plays patriotic songs like this all the time, but maybe it is times like this, when you get anxious, sad, or even angry that you have this desire to clinch to your roots. Whatever happens, we are Chinese, and this is our roots."

Her feeling resonated in the comments, where many said it was surprising to find themselves touched by this song they used to consider outdated or too patriotic.

Not everyone loves the video though, as some commented that their performance only looks "pretentious at times like this."

To that, Liu Lijie replied: "For me, even in most challenging times, I need some rituals. However insignificant it may be, it makes me happy to think a little musical comfort was sent to those in the same difficult situations, and some people may feel there is still love and warmth in the city of Shanghai, my hometown."