Farewell for some, long-awaited break for others

Away from home
Shot by Dai Qian and Zhou Shengjie. Edited by Tang Dafei.

After the unexpectedly long lockdown, some people are leaving the city. For some, it is a final farewell, and a delayed homecoming. For others, it is "Shanghai, I will see you again." 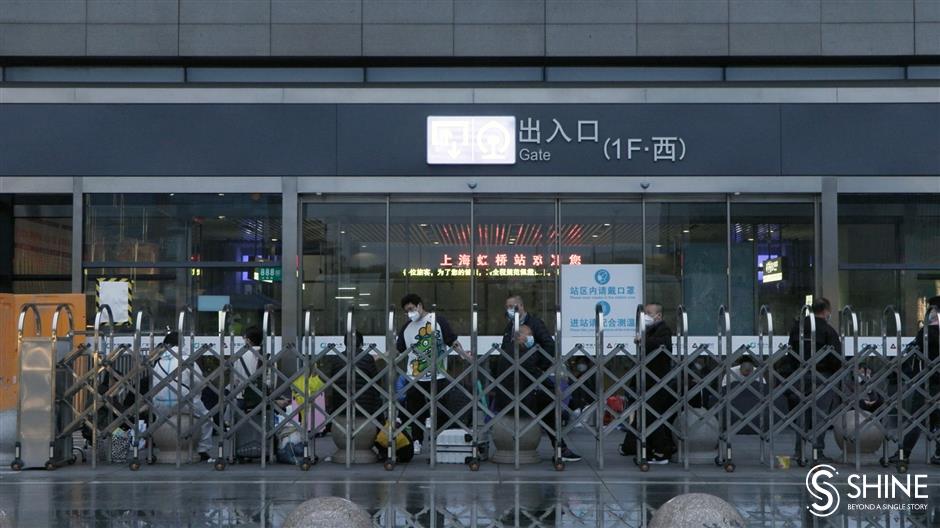 Passengers with tickets for the next day wait at the entrance gates of the Hongqiao Railway Station on May 20. 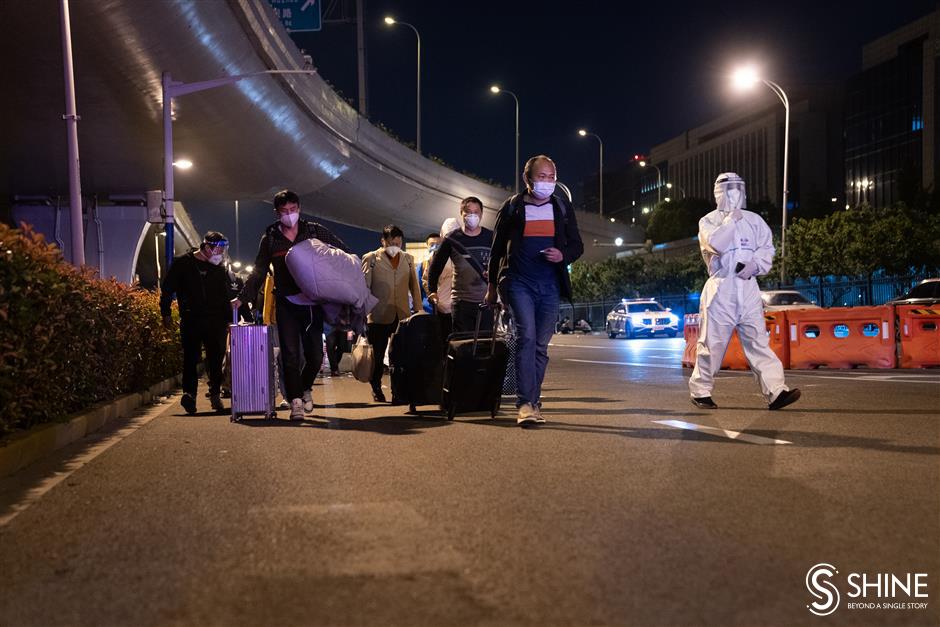 People walk to Hongqiao station with their luggage.

Restored domestic flights and increased train services are some of the changes this week, after Shanghai announced on Monday that life and business would return to normal between June 1 and mid-to-late next month. Passengers need to show their green health code to enter the railway station.

It's a long-awaited announcement for Lin Zhenjun, a 51-year-old migrant worker who had long exhausted the 2,000 yuan (US$298) cash he had. Now he has to figure out how to leave Shanghai without money or a mobile phone.

"I threw away my broken phone on April 12, forgetting to take out the SIM card, so I can't buy a train ticket online now," he told Shanghai Daily on Monday, near Hongqiao station.

"I want to go back to Yiwu, or at least leave Shanghai, to find some work immediately."

Tempted by higher-than-usual pay, the Jiangxi native was recruited from the city of Yiwu in nearby Zhejiang Province and arrived in the city on April 9. The contact person from his employer, who was supposed to pick him up at the train station, didn't show up. And Lin was taken to a quarantine site. 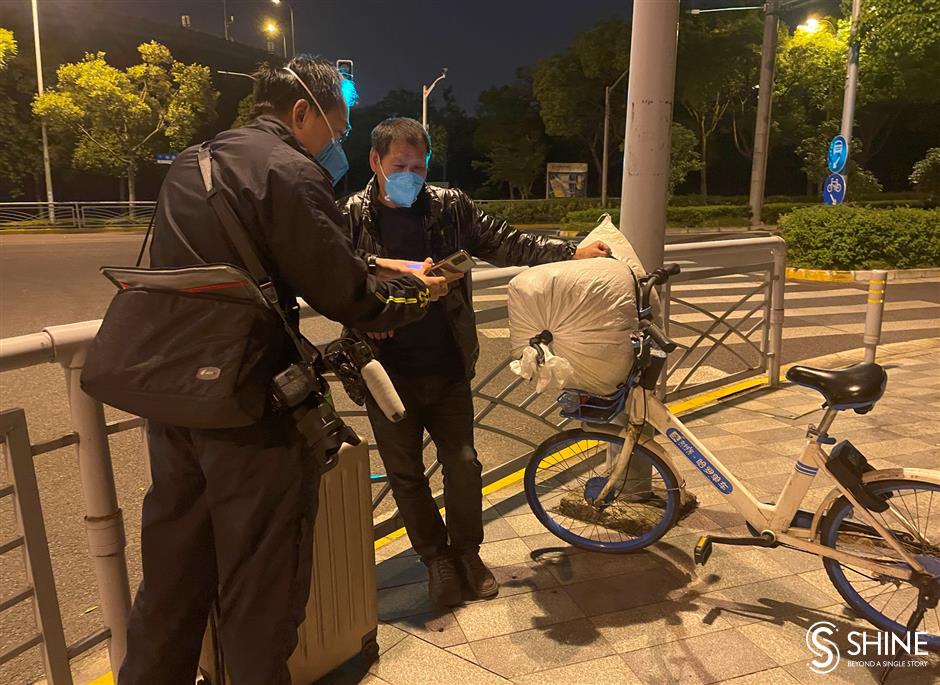 Unlike newcomer Lin, Hubei Province native Chen, now in her 30s, has lived in Shanghai since she came for work at the age of 17. She considers herself lucky to have got a ticket during pre-sale on May 14.

But Chen is not betting her chances on returning home purely by luck. She biked more than two hours for nearly 14 kilometers to the railway station, one day before her departure, to leave enough time to deal with any uncertainty.

She brought two luggage cases with the bike, with the rest of her daily necessities in Shanghai to be mailed later by her roommate.

Chen was taken indoors to the parking lot from the temporary site near the station, to spend the evening. Those who were better prepared brought tents with them to the site. 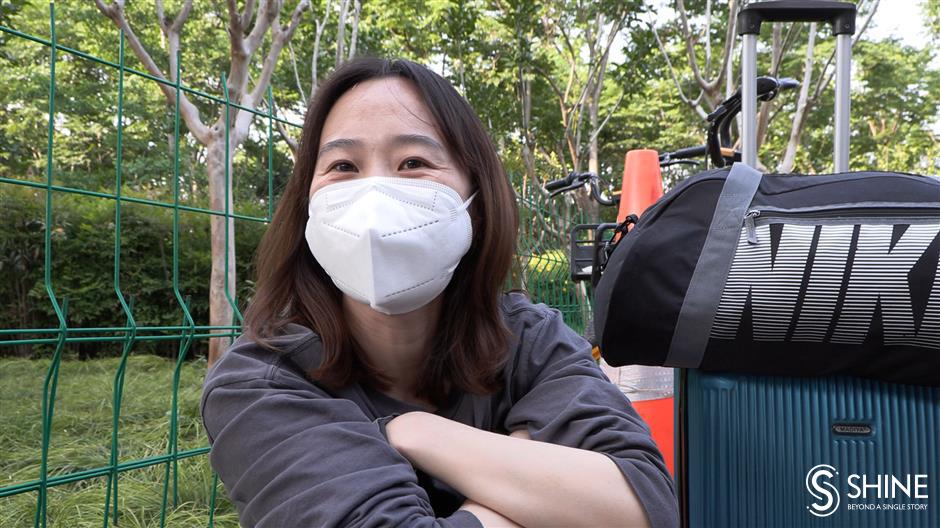 Chen sits at the temporary site outside the station with her luggage.

Many taking the outbound trains spend the night there, like Chen, but not all of them know where to go. Police in Minhang District try their best to help.

They patrol the area every day after the last departure and arrival at the train station, and question those carrying luggage and spending the night in cars or sleeping in the open. Their infection status is also verified.

Those who possess a train ticket for the next day or are on transfer in Shanghai will be accommodated at the P10 parking lot of the train station, and later enter the platforms above from there. Passengers with a train ticket for the next day or are on transfer in Shanghai are accommodated at the P10 parking lot.

"I'm not leaving because of the resurgence or what has followed," Chen said. "I still quite like the city of Shanghai, where I had fun for more than ten years. I will definitely come back for visits later."

Her family has long moved back to the city of Xiangyang in Hubei Province, and Chen planned to follow their steps just before the resurgence started. Her trip was delayed by the lockdown.

She has been preparing the trip through social media platforms, looking for updates of the policies in both Shanghai and Hubei Province, and learning from the experience of those who already left.

"And I kept getting distracted by the official account of my hometown, where all kinds of fun places and delicious cuisines are posted. I really miss all these and would totally go for all of it after I finish required quarantine in Wuhan," Chen said, before listing the cuisines she has long missed.

"All the breakfast dishes, tofu noodle, fat intestine noodle, 1000-layered pancake … there are just so many dishes that I miss!"

Migrant worker Lin hasn't exactly thought about whether to come back to Shanghai. The thought of leaving and finding a job as quickly as possible has occupied his mind. And getting enough food has been a challenge.

"I brought a little over 2,000 yuan with me, and it's long gone, and I can't find a place to buy a new SIM card, so I can't pay by phone," he said. "I've been begging for food from those passing by, and sometimes I just had to starve. Luckily, I got today's lunch from staff at a quarantine site nearby."

Lin tries to get his PCR tests whenever he can, registering through his ID card, because a negative test report within 48 hours is required for leaving Shanghai. He stays prepared, without a train ticket, or even the means to buy one.

"Sometimes I call police for help," he said. "They have helped me as much as they can, but there are still many they can't help me with."

Shanghai Daily tried to get a ticket for Lin during the interview but the online ticket booking platforms showed no tickets left. The reporter didn't give up and took down his ID number. After various attempts on different platforms, the reporter finally got a ticket to Yiwu for 18th noon via Meituan app, the day after the interview.

Unfortunately, Lin was not at his usual place when the reporter returned to the train station that day, and had to cancel the ticket.

Shanghai Daily returned to the station again on Friday, with food, and failed to locate Lin. We hope he has been helped by someone else, left the city and found a job.

Or, at least, it will be easier for him to get food now, as we discovered Niu Hongshui, a restaurant chain owner in his 40s who started distributing lunch and dinner boxes for free on Thursday.

"I was here to see off a friend yesterday and saw with my eyes what I had seen a few days earlier on Douyin," he said. "I really want to help them." 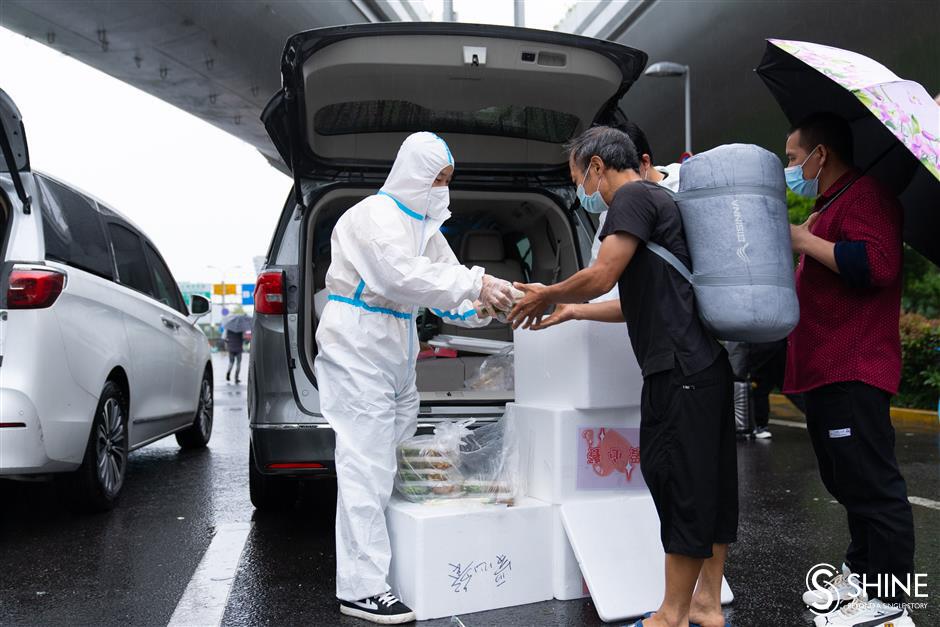 A staff member of Niu Hongshui's restaurant distributes lunch and dinner boxes for free at the station on Thursday.

His restaurant, which has all the passes needed and is busy, acted quickly. They were not able to prepare meal boxes on Thursday, and distributed fruit instead.

Now, they are better prepared, and are giving out free meal boxes - 300 for lunch and 300 for dinner. The 300 lunch boxes took them about 90 minutes to prepare, another 30 minutes to reach the station, and were gone in 15 minutes.

"I plan to continue until this resurgence is over, and I will invite fellow restaurants and companies to join," Niu said. "Many companies are willing to join. By providing a free lunch/dinner, we hope these passengers can feel the warmth of Shanghai before they leave."

The Henan native, whose chain has eight restaurants, suffered heavily due to the resurgence.

"I was helped by many in this city, when I came 20 years ago, with no money and no place to stay," he said. "So I love this city, and now it's my turn to help others." 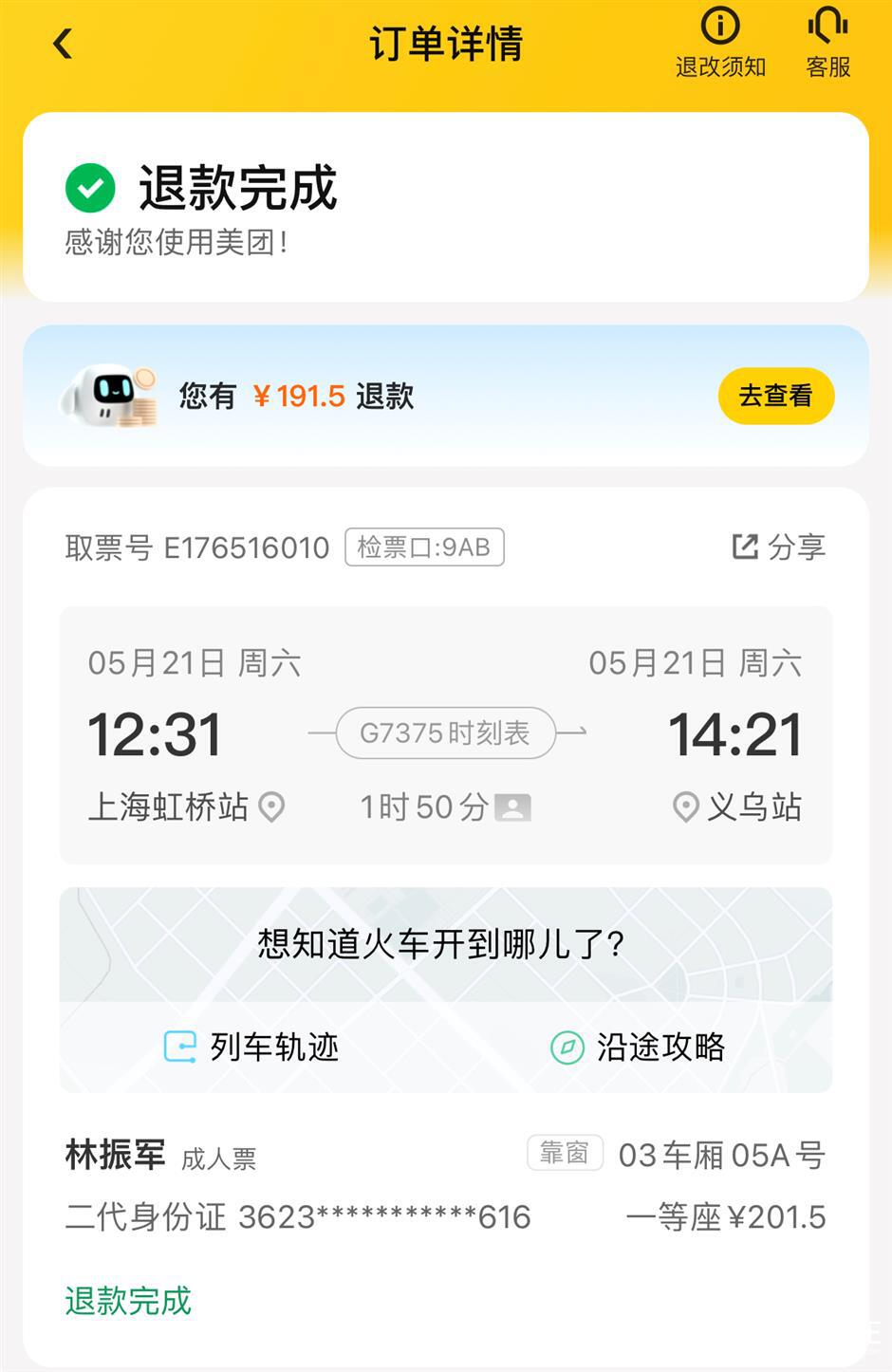 A Shanghai Daily reporter got a ticket to Yiwu for Lin on May 18 at noon, but had to cancel it after he could not find him again.

1. Don't go without a ticket on the day or for the next day. There are no offline ticket sales yet.

3. Bring water and snacks. Bring a tent and blanket if possible.

4. The toilets are scarce and crowded.

5. If you take a cab, it is still about half an hour walking distance to the entrance.

6. You can buy tickets on various platforms, including 12306, Meituan and Ctrip, among others.