The daily commute is one of life's most mundane activities, yet it is a central component of daily existence for most of us.

Whether it's from behind the wheel of an automobile on traffic-snarled streets, on crowded trains or buses waiting to squeeze out at your local station, commuters usually focus on the tasks of the day at their destination: work, home, or elsewhere. In time, the journey itself is reduced to rote muscle memory and repeated as though on auto-pilot.

I, as a daily rider of the Shanghai Metro subway system, am part of the herd. The masses of humanity and arms, legs, bags, umbrellas and everything else blend together and, unless something particularly strange happens, nothing around us really registers in our minds. Not to mention that we're all with noses in phones constantly as well.

I have, though, in recent years, made an effort to pay more attention to the little things. As is one of the focal points of this column, many things we see on a daily basis offer more than just practical utility. Sometimes there is more present in a space than is readily apparent, or there might be something worth examining hidden in plain sight.

As I've made a conscious effort to reflect more upon my surroundings and remove myself from the ranks of the smartphone zombie horde during my commute, I've realized that the Shanghai Metro really does have some interesting quirks of design. Some of the stations, particularly those recently completed within the past two years, are actually quite appealing to the eye.

Between December 30, 2020 and the same date a year later in 2021, three completely new Metro lines opened for commuters. Line 14 runs east to west right through the heart of the city; Line 15 runs north to south, west of the Inner Ring Road through Putuo, Changning, Minhang and Xuhui Districts; and Line 18 is also north to south, beginning in Baoshan, passing through Yangpu at the North Bund and into the Pudong New Area.

As I incorporate these newly opened Metro lines into my journeys around the city, I've come to appreciate the unique designs and special traits that many of these stations have. From grandiose, colorful atriums to benign, hidden Easter eggs, several stations have a lot to offer commuters.

Let's take a look at some of the most interesting new subway stations opened in Shanghai since 2021. 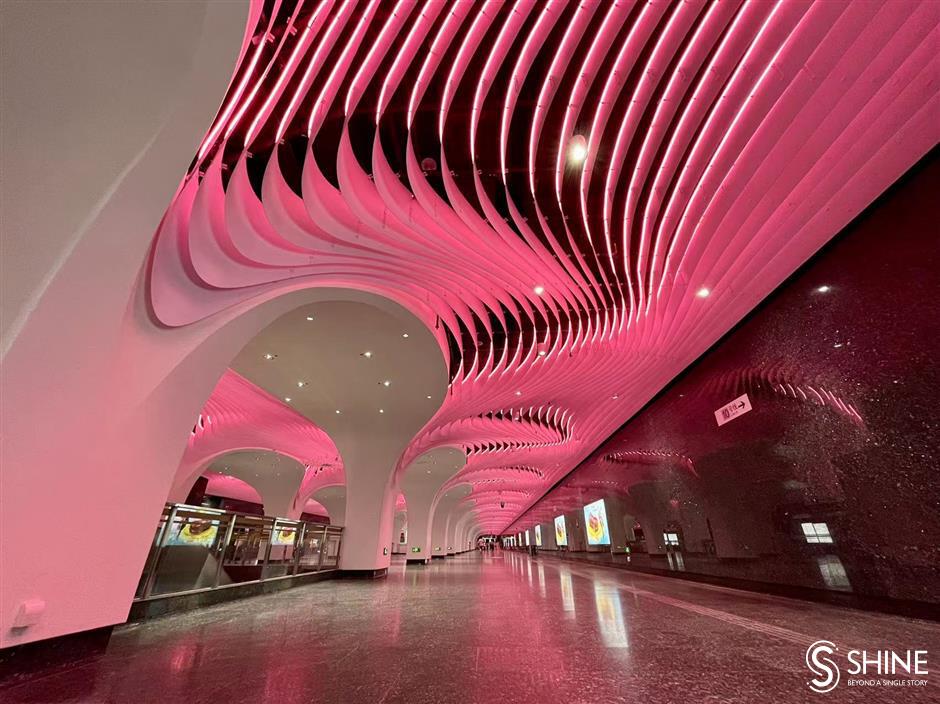 The new Line 14 area in Yuyuan Garden Station is covered in an undulating wave design across the ceiling, with color-changing lights (below). 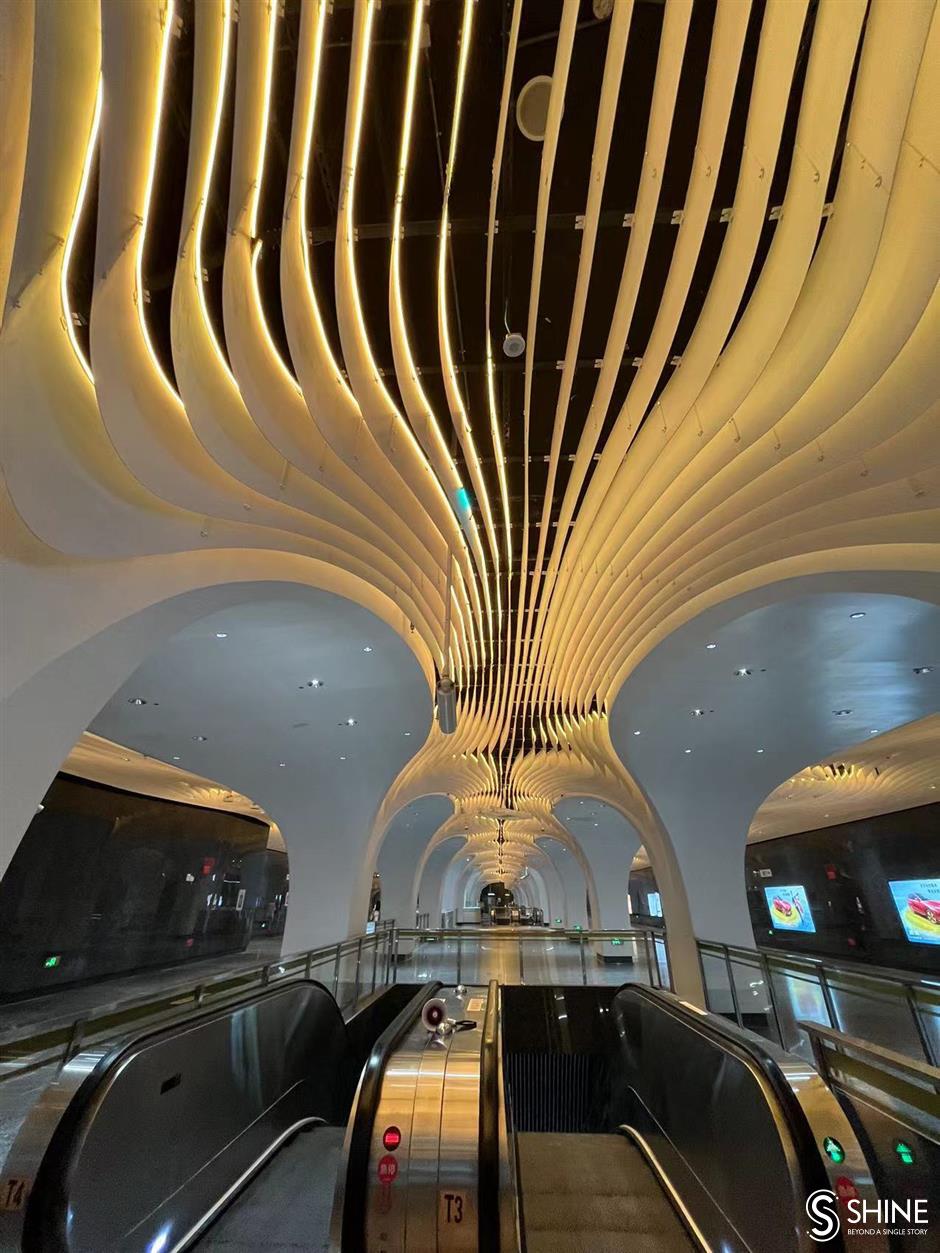 Located right downtown near the Huangpu River, Yuyuan Garden, the classic Shanghai landmark that dates back to the 16th century, is accessible by its eponymous Metro station at the confluence of Lines 10 and 14.

The new Line 14 area, both down on the train platform and in the upstairs atrium, is covered in an undulating wave design across the ceiling.

Color-changing lights dance and pulsate around the station, slowly morphing through cool blues and greens, then suddenly brightening and shifting to flickering oranges and yellows. It definitely captures the attention and spices up a normal rush hour routine.

While Yuyuan Garden is a city hotspot, the Wuzhong Road Station on Line 15 is in a relatively unassuming location, in the corner of Minhang District bordering the districts of Changning and Xuhui.

The train platform area is significantly dimmer than other stations with the main lights low, but the ceiling is traced with lines running the length of the waiting area. Blue and purple streaks race across the platform ceiling, giving it a feel similar to a waiting area for a futuristic roller coaster.

The atrium upstairs, though, is what makes this station pop. Equally dimly lit, the main illuminating source is the three-dimensional mural of the city skyline on either side of the Huangpu River spanning both walls from end to end, giving the station a blue-hued glow.

Perhaps this station was chosen for this special design because it is the nearest stop to the Metro's operating headquarters. In any case, it certainly stands out. 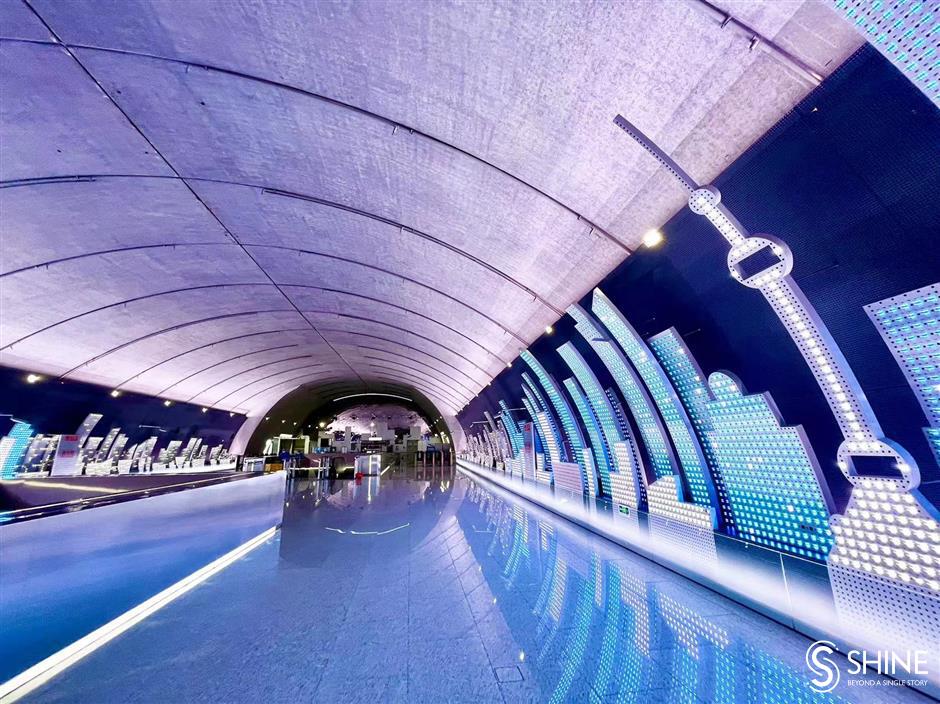 Three-dimensional mural of the city skyline on either side of the Huangpu River spans both walls from end to end in Wuzhong Road Station on Line 15. 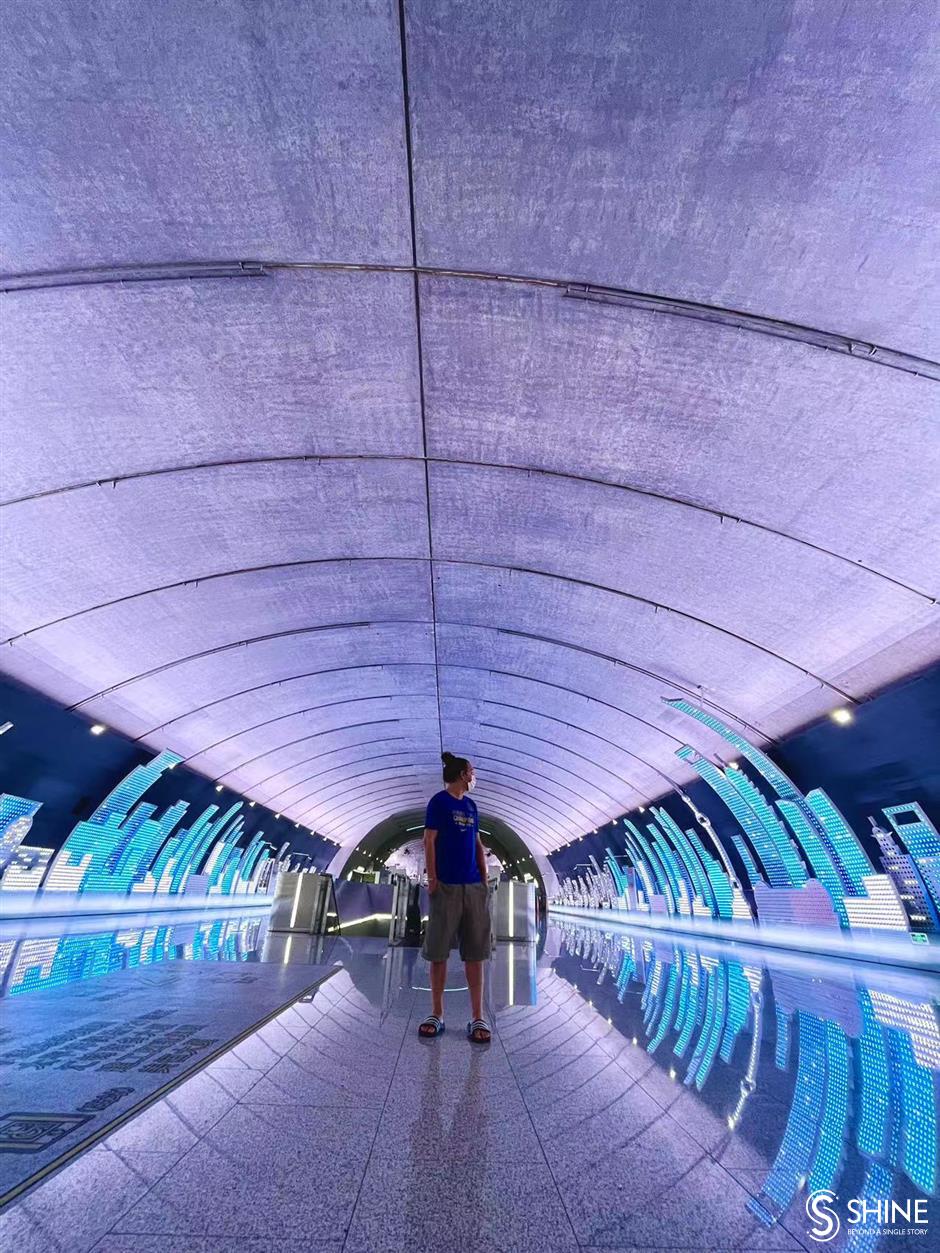 The Metro stop at Shanghai South Railway Station in Xuhui District is one of the oldest in the city, as it lies on Lines 1 and 3 and was one of the original Line 1 stations opened when the Metro itself did in May 1993.

With the completion of Line 15 last year, though, a new wing was added, giving the old station an injection of new design and flair. When connecting from one of the older lines to Line 15, commuters walk through a tunnel covered on two sides by wooden planks with lighting patterns that curve and twist from floor to ceiling. 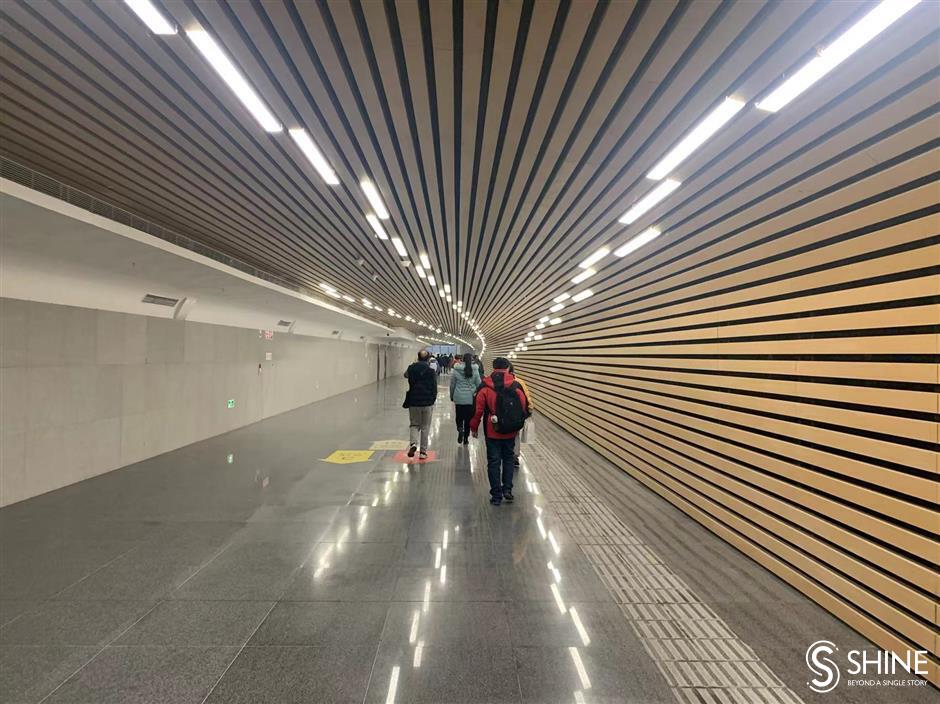 When connecting to Line 15 at Shanghai South Railway Station, commuters walk through a tunnel covered on two sides by wooden planks with lighting patterns that curve and twist from floor to ceiling (below). 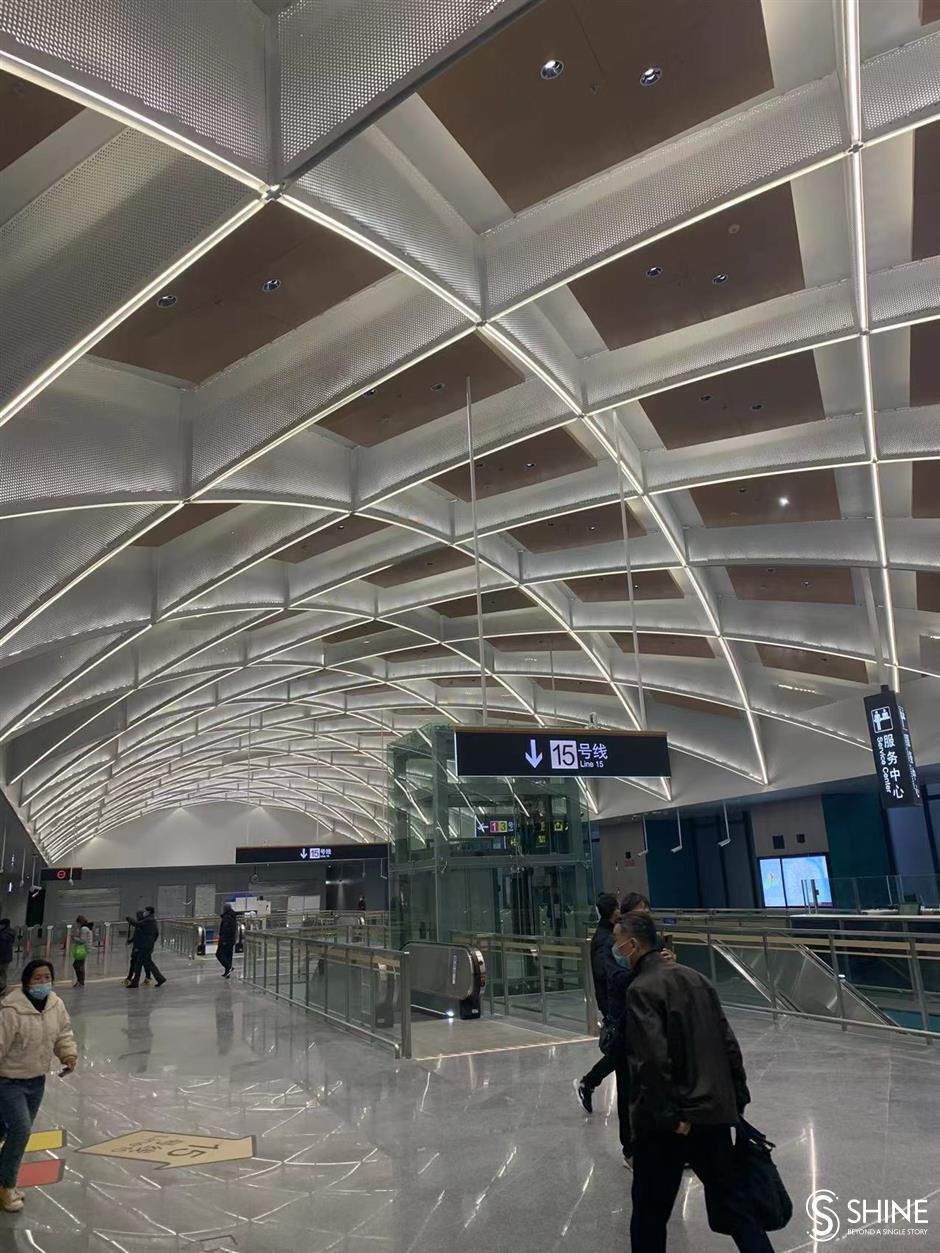 This stop, on Line 18 on the North Bund in Yangpu District, is located in the heart of Shanghai's original industrial and manufacturing area dating back over 100 years. Many of Shanghai's factories and other production facilities were located here in the late 19th and early 20th centuries.

In homage to the area's history, the station platform is split evenly in to two halves; one black, one white. A golden dividing line runs down the center, and it also serves as a time line, demarcating the establishment of several important enterprises and facilities during the city's early industrialization. The station hall upstairs also has an interactive screen with more historical information about the region. So not only does the black-and-white design stands out, the station also provides a bit of a history lesson regarding Shanghai's early development.

Other Shanghai Metro stations have their own special characteristics, of course, especially along the newly opened lines. These new stations have been designed and constructed with aesthetics in mind as opposed to simple practicality, giving us commuters a little something extra to look at and appreciate during our busy days. 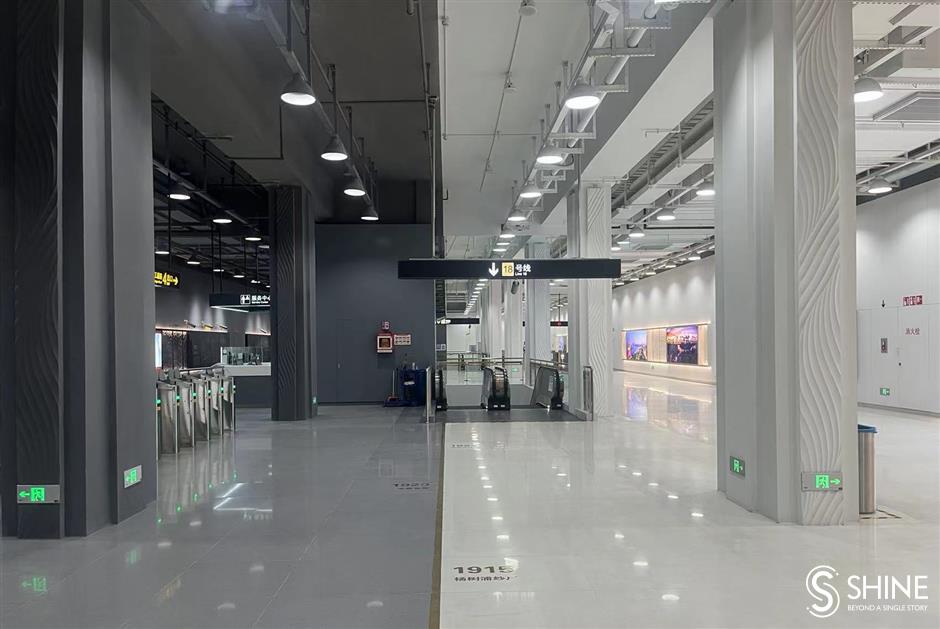 The black-and-white design makes the Danyang Road Station on Line 18 stand out.