As a traditional favorite, Chinese white liquor, or baijiu, is reaching out to young adults with many innovative flavors and formats, hoping to cultivate consumption among a generation that likes seeking out the new and unusual.

Baijiu-flavored snacks, such as ice cream, cake and chocolate, are being put on the table and becoming popular among young adults.

Known for its mellow taste and lingering fragrance, the traditional distilled spirit dates back to the Liao Dynasty (907-1125), according to the latest archaeological finds at the Da'an distillery site in northeast Jilin Province.

The alcohol content of this throat-burning tipple is commonly from 38 to 53 percent. People drink pure baijiu without adding juice, ice or other extras – unlike other spirits like vodka and gin.

Baijiu's brand positioning and packaging generally give consumers a sense of occasion. At Chinese state banquets, baijiu was once used to entertain foreign leaders to show respect and sincerity. During business dinners and family get-togethers, people drink baijiu for a sense of festivity and friendship.

It was also the favorite of some ancient Chinese poets seeking inspiration or solace. 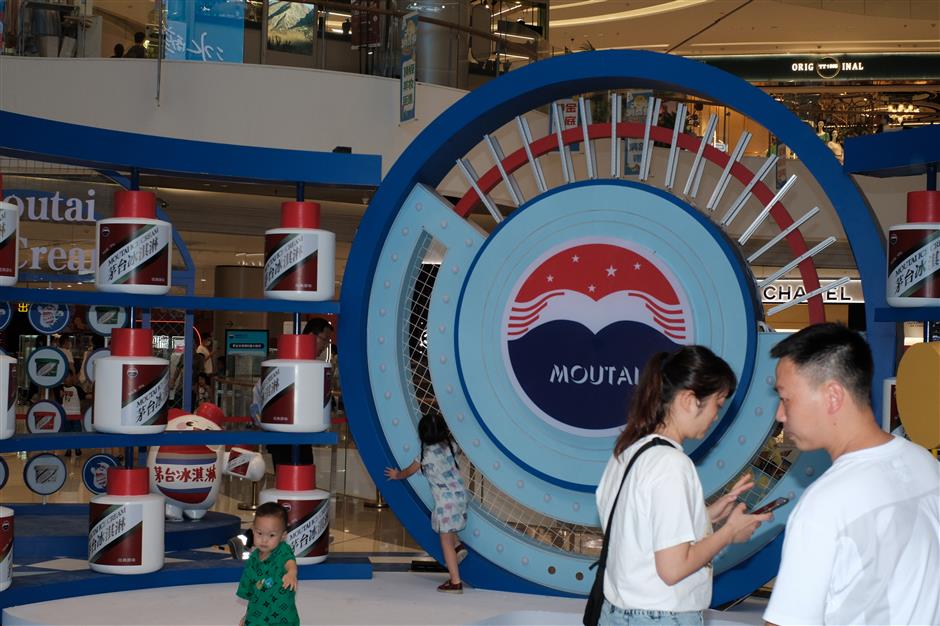 Kweichow Moutai is China's most expensive baijiu. On its official mobile app, iMaotai, a bottle of 100 milliliters of Moutai's classic Feitian 53-percent liquor costs 399 yuan (US$59).

However, not everyone can appreciate this unique spirit.

Some consumers, especially Generation Z, flinch from it because of its strong taste, the research firm Ipsos said in its 2021 baijiu consumption report after surveying people aged from 18 to 34.

And the high alcohol content is another obstacle. The boundary between liquor and beverages is becoming blurred, but several shots of baijiu may make drinkers, especially those not used to strong spirits, feel light-headed and go unconscious.

Research by CBNData in 2020 found "health" and "tipsy" are the key terms about alcohol for younger drinkers. They enjoy the sense of fun that comes with moderate drinking, which lets them party longer.

But it is not easy to buy it at the original price because the quantity provided on the app is limited every day and demand exceeds supply. The price is hundreds of yuan higher on unofficial channels. 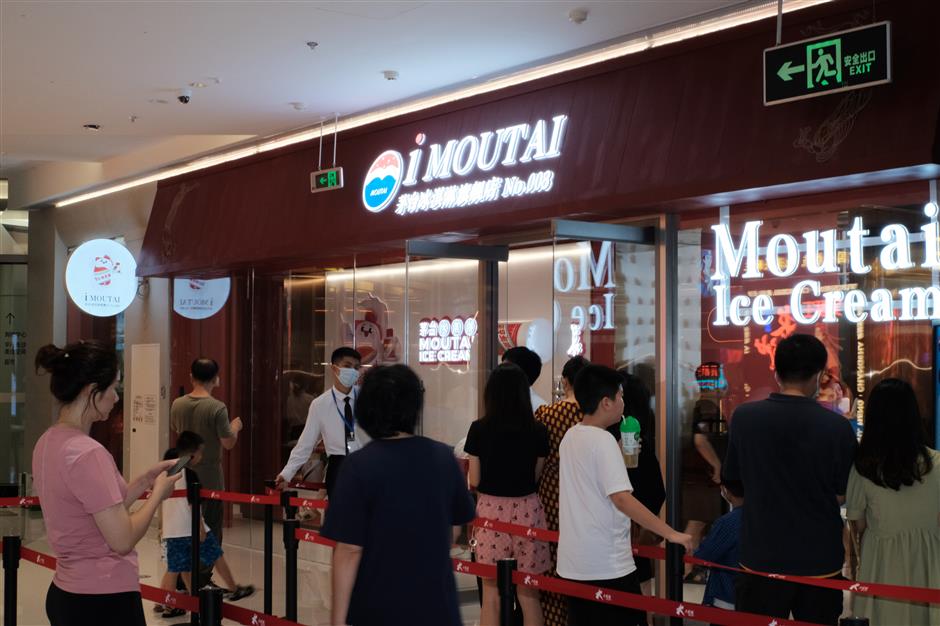 People line up outside an outlet of Moutai that sells its ice cream.

Online retailer JD shop said in a recent report consumers aged between 21 and 35 who bought baijiu during the first quarter of this year on the platform only account for 23 percent of buyers.

But the report also said there is an increasing number of young adults being attracted to baijiu. CBNData says the younger generation has huge market potential.

To make an impact on young people, many famous baijiu brands have been cooperating with other enterprises to launch innovative trans-boundary products suitable for younger tastes in recent years.

Over 30,000 people clicked the "Favorite" button and it won the best story award at the 14th Xiamen International Animation Festival, standing out from 3,340 works from nearly 40 nations and regions. 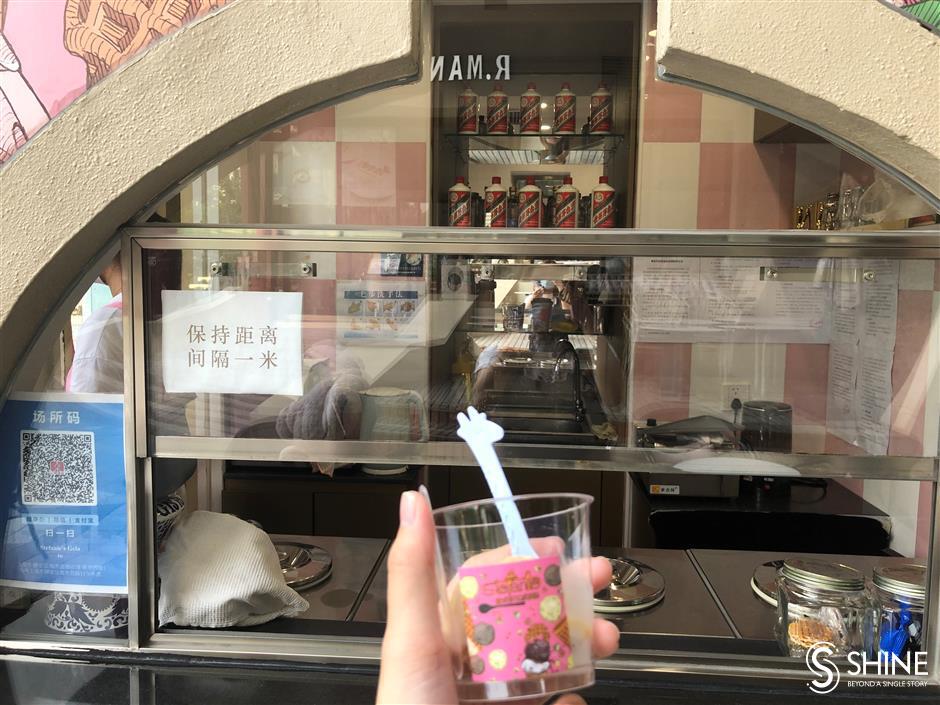 Baijiu-flavored ice cream is a favorite marketing device. As the size of the ice cream industry increases year by year, baijiu ice cream has become a selling point – claiming that buyers can get drunk by eating ice cream, or making it into the shape of a baijiu bottle.

The trendy desserts were very popular at first. According to CBNData's report, for instance, the 20,000 "blackout drunk," ice creams launched by Luzhou Laojiao and ice cream brand Chicecream (known as Zhong Xue Gao) in 2020, sold out in only half an hour.

But now many hits are hard to find in the market. Some products are limited from the beginning, while some are gradually disappearing off the shelves.

Unlike these short-term products, Moutai's ice cream has prepared for a "protracted war." The company said on its official account on social media platform Weibo that it is doing research and developing new products that meet the needs of young consumers.

In May, Moutai cooperated with dairy producer Mengniu Dairy Co to launch three flavors of ice creams – plum, vanilla and milk – in small tubs. Each tub of 75-78 grams contains around 2 percent of Moutai and sells for between 59 and 66 yuan.

At the same time, the high-end spirits maker opened its first two ice cream shops in southwest Guizhou Province where Moutai is a specialty.

As of last Saturday, nine offline flagship stores have been opened in Chinese cities, such as Hangzhou, Guangzhou and Wuhan. People from 19 provinces and cities, like Shanghai, Beijing and Shanxi, can order the ice cream on iMaotai.

Moutai said on Weibo on Monday that 10 new stores will open soon, including in Shanghai, Shenyang and Harbin. 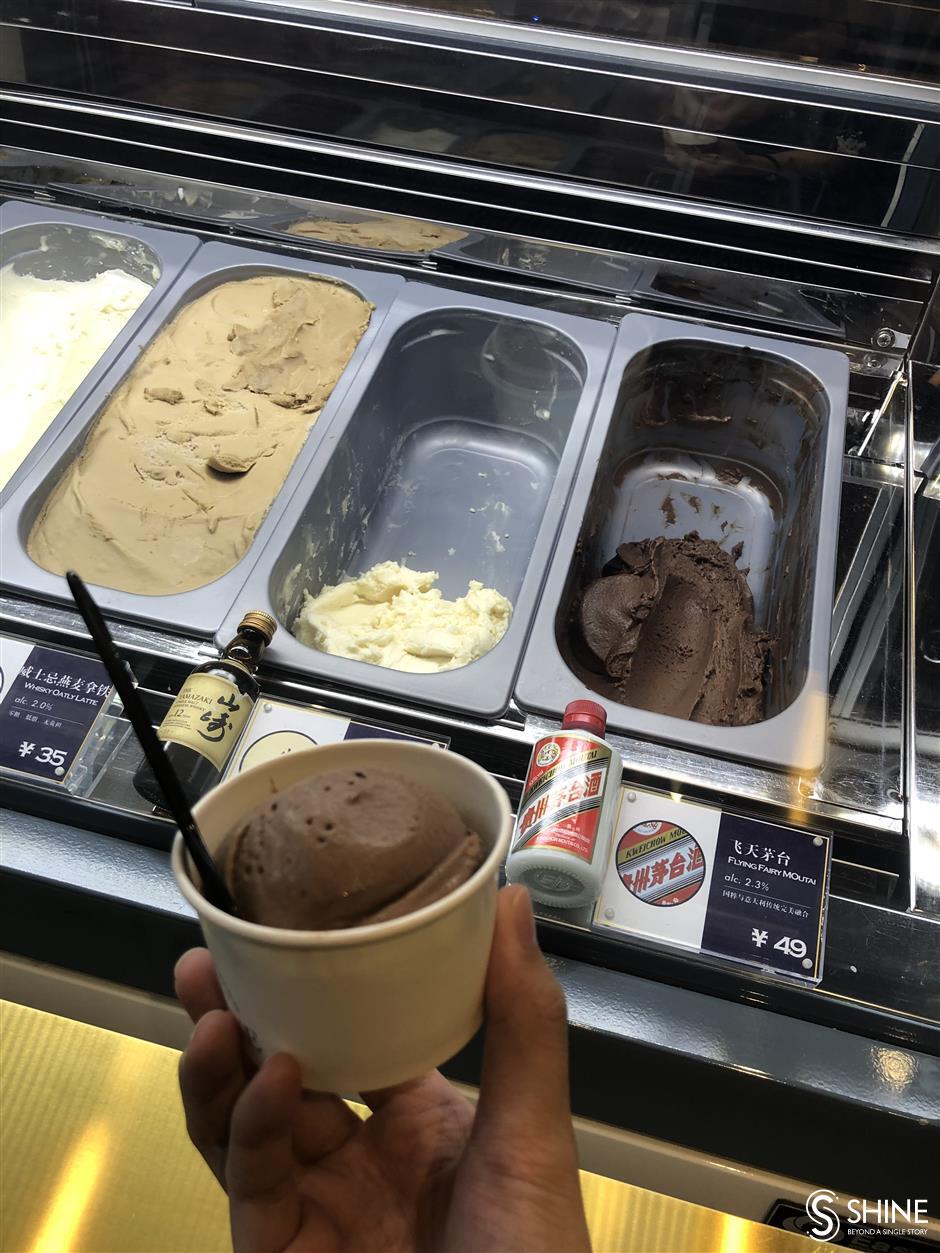 Get drunk on ice cream? Each tub of 75-78 grams contains around 2 percent of Moutai and sells for between 59 and 66 yuan.

Unofficial buying sources can be found on e-commerce platforms, such as Taobao and JD, for those who live outside the coverage area. Customers need to pay more than 200 yuan for a tub from the purchasing agent. Economic Weekly magazine reported last month that an agent in Beijing has made about 100,000 yuan out of it.

The latest official data shows that around 660,000 Moutai-infused ice creams were sold as of July 9. Ding Xiongjun, head of Moutai, said during the China Entrepreneurs Forum on August 2 that the ice cream is such a great success and supply cannot meet demand.

Many people, including bloggers, have shared their first impression of the ice creams on the Internet after tasting them.

Food blogger "Boss Yao in Beijing," who has 1.12 million followers on Douyin (the Chinese equivalent of TikTok), highly praised the cross-boundary product in June. As a dessert chef, she said the milk-flavored one is the best ice cream she has ever eaten.

"MR-White Ice," a blogger with nearly 26 million followers on Douyin, said the ice creams taste good but the high price of such small tubs makes him look like a "sucker."

Many netizens called the high-priced ice cream a rip-off. But when talking about the spirit, they said although they cannot afford Moutai, they can at least buy Moutai ice cream.

Some people still cannot take the taste of the throat-burning liquor even though it has been diluted with the ice cream. Charlotte Wang, a 29-year-old woman who doesn't drink, told Shanghai Daily recently that this is her first time tasting baijiu but she thinks the ice cream is a drag to eat.

It has also kicked off a nationwide social media craze for home-made Moutai ice cream.

Many companies and corner shops, like tea drink chain Heytea and a gelato shop Fontaine on Wukang Road in Xuhui District, have found a niche in the baijiu market. They add the liquor to their products without the endorsement of the baijiu producers, producing offerings fascinating many young consumers.

Lee, 26-year-old owner of Fontaine, said the chocolate ice cream spiked with 2.3 percent Feitian Moutai is one of the three top-selling products in the store and each is nearly 50 yuan.

There used to always be long lines stretching outside. Around 500 to 600 scoops of the baijiu ice cream could be sold in one day before the store was badly hit by the COVID-19 pandemic this year.

"At the beginning, I just wanted to run a bar. Three years ago, I started to develop a gelato with Chinese characteristics and I didn't expect it to sell so well," he said.

"The combination of Moutai and chocolate can make the taste of the baijiu less strong, so that novice drinkers can appreciate it as well."

As wanghong (Internet celebrity) products, just how long the interest in baijiu ice cream and other offerings can last and just how much benefit they can bring to businesses remains to be seen.

But it is undeniable that more young people are tasting baijiu for the first time and getting a basic understanding of this traditional spirit through these trendy products.

When it comes to whether baijiu needs to be comprehensively reformed for a younger market, Ji Keliang, former chairman of Moutai Group, said on a chat show in 2020 that the reason why young people don't drink Moutai is that they are too young, somewhat ignorant and do not know how to appreciate it.

Although that sounds arrogant, Jack Ma, co-founder of Alibaba Group, thinks the same way. He said at the World Economic Forum in 2018 that after experiencing the hardships of life, today's young people may gradually learn to love baijiu by the time they turn 45.

A 55-year-old man, surnamed Shen, also told Shanghai Daily while eating Moutai ice cream: "Without the impetuosity in my youth and the flattery in the workplace, when I turned 50 years old I started to enjoy my moments of solitude. It is also when I fell in love with baijiu itself."