Sewing the seeds of modern fashion from an ancient folk art

Young people growing up on the fringes of cities may yearn to stay close to the buzz of downtown urban life, but Xie Ye chose a road less traveled.

Two years ago, at age 31, she quit her job as a telephone operator in Shanghai and moved to her hometown of Xinnan Village, about 50 kilometers from the city's central business district. There, she works in the cottage industry of tubu, or homespun cloth.

She cherishes heartwarming childhood memories of sitting alongside her mother as she wove cloth. Today, sitting amid some 20 village women, Xie is recapturing that pleasure as one of the people trying to infuse a 600-year-old folk art with new designs and modern products. 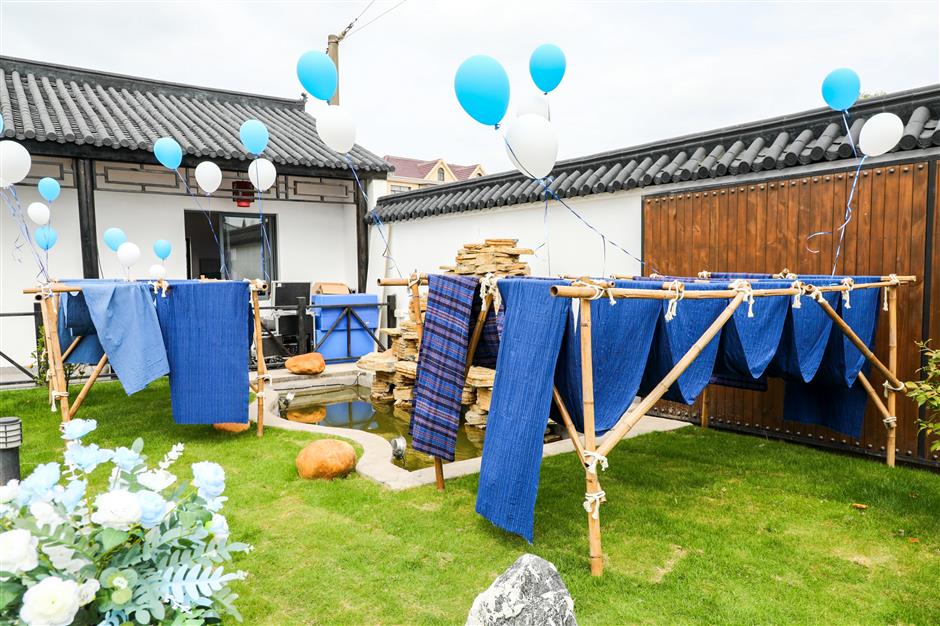 Xinnan Village's "tubu yard" is a white-walled, grey-tiled house with ornamental flourishes in shades of blue.

Xie works at the town's "tubu yard," a white-walled, grey-tiled house with ornamental flourishes in shades of blue.It is a showplace for tubu handicrafts like cushions, scented sachets and tiger toys, and a venue for activities such as lectures and workshops.

Part of Xie's work is greeting visitors from home and abroad. Recently she said she has noticed an increase in the number of the visitors and an uptick in village "aunties" wanting to take up weaving.

"We get extra income from the clothes, accessories and cultural products we make," Xie told Shanghai Daily. "The whole process is rewarding and interesting. It has improved and enriched the life of this village."

Unlike cultural heritage relegated to museums, tubu is a vibrant, living legend. 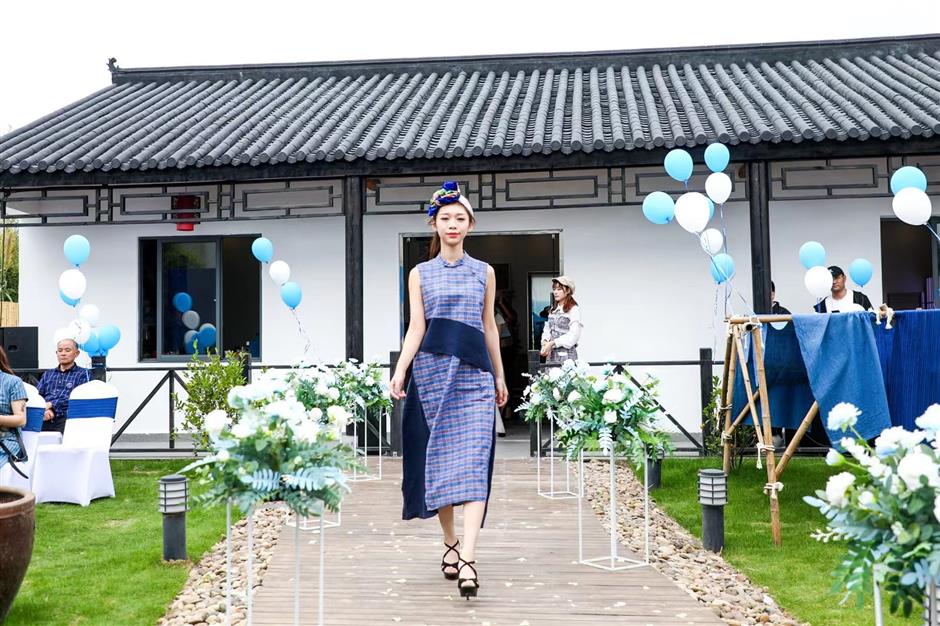 A tubu fashion show is held at the "tubu yard."

Xie is among those working in tandem with the Shanghai Xinchang Cultural Development Co. and the Pudong Women's Federation to keep that legend alive. Already, some 130 tubu products have been created under the fashion brand ZhiyaZhiya, which is registered in Pudong. The name imitates the sound of handlooms.

Xinnan Village is located in the ancient water town of Xinchang. In its modern makeover, tubu is integrating with other local craft traditions, like embroidery, bamboo weaving, jewelry and leather. 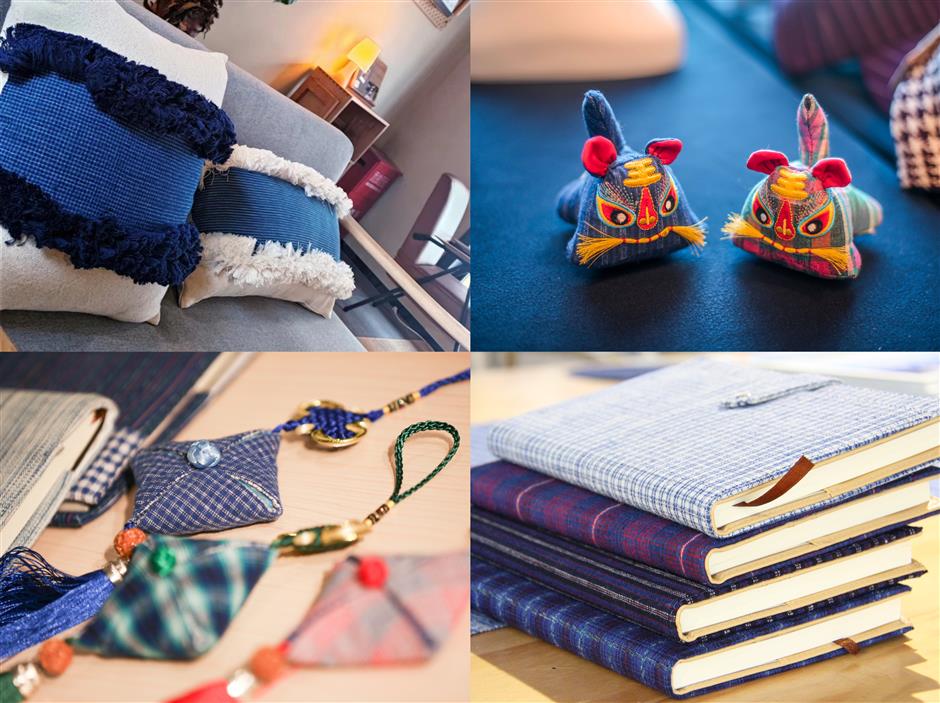 In its modern makeover, tubu is integrated with many local crafts in an array of fashionable products and souvenirs.

Tubu used to be prevalent in the Yangtze River Delta region of ancient China, where cotton farming and weaving machines were a common sight. However, the development of the modern textile industry tended to shove the tradition folk art aside.

For a time, the skill of making tubu faded as machine-made clothes dominated the market and people rarely made their own cloth anymore. So, it came as somewhat of a surprise when officials from the Pudong Women's Federation in 2018 found tubu making still existed in rural areas.

Since then, the federation has systematically restored the 70 or so procedures that turn cotton into cloth and helped develop diverse patterns of tubu. 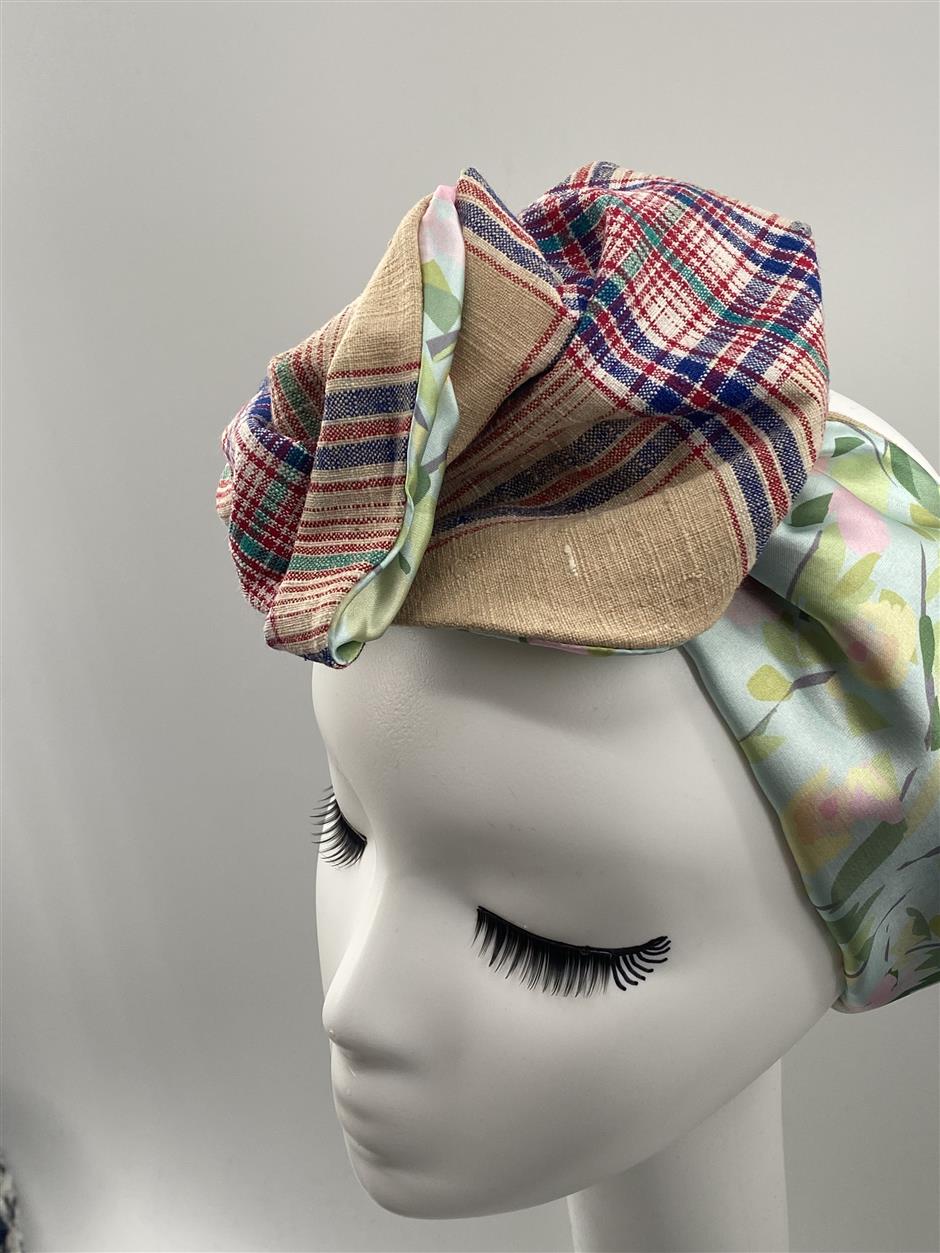 Tubu hair bands have been exported to Europe.

What's more, women from the towns of Xinchang and Huinan in Pudong have received training in the craft. It's estimated that a woman can earn an extra 60,000 yuan (US$8,430) a year from weaving. It's a drawcard for village women with time on their hands.

A tubu exhibition hall in Haishen Village displays facial masks, coasters, notebooks and other souvenirs with tubu elements, along with clothing and accessories.

Last month, the hall hosted a fashion show of tubu dresses. The open stage was set in a farm field to highlight the fabric's natural origins. 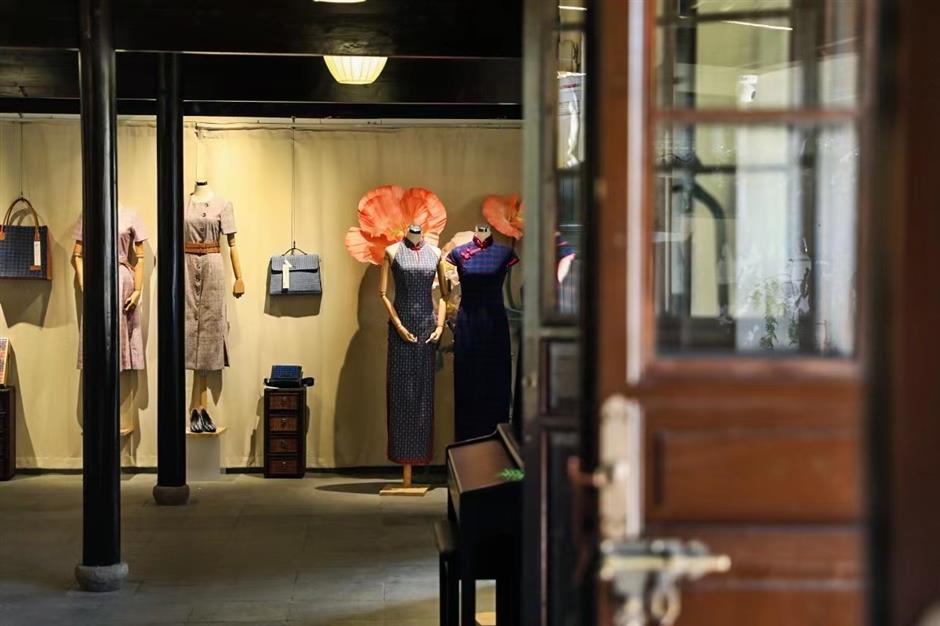 A tubu exhibition hall in Haishen Village displays clothing, accessories and souvenirs, providing insight into the development of the 600-year-old folk art.

Meanwhile, an institution co-founded by the women's federation and Donghua University's College of Fashion and Design is working to preserve and develop the ancient craft.

"It's in keeping with Shanghai's blueprint to become a world-class design capital,"said Lang Xiaqing, director of the federation's Women Development Center.

The institution will provide link-ups with well-known designers and provide Donghua University students with internships and entrepreneurial opportunities.

Lang, clad in a stylish tubu suit, said the fabric breathes and is soft and comfortable. It's also eco-friendly. She said she expects promising young Chinese fashion designers to embrace the fabric. 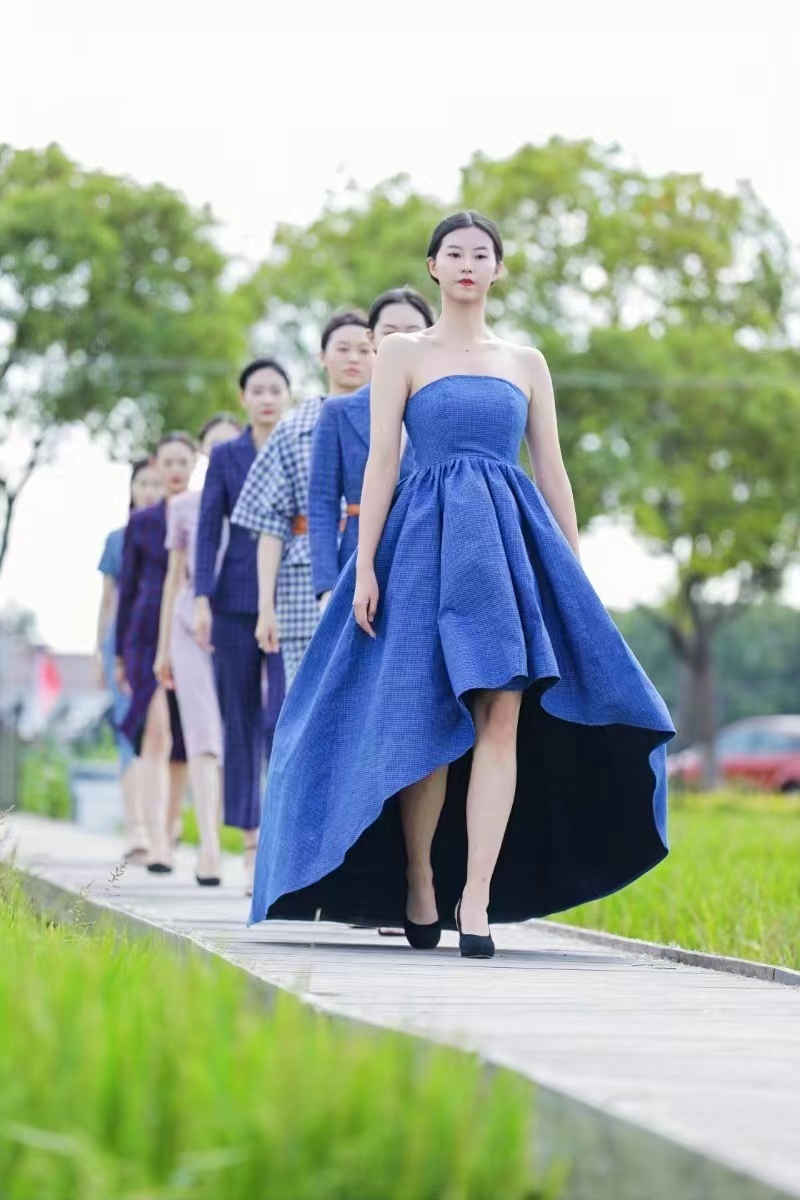 The idea of integrating old crafts with modern designs is catching on. It's what LVMH, the world's largest luxury-goods group, has been doing for years. Dior, for its part, has been borrowing traditional Italian handicrafts for some of its designs.

"Many young people today still have little knowledge of the craft," said Shanghai Xinchang Cultural Development's Gao. "So marketing is very important to us. We want to incorporate tubu products into landmark city fashion and art venues, and also venture into livestreaming commerce." 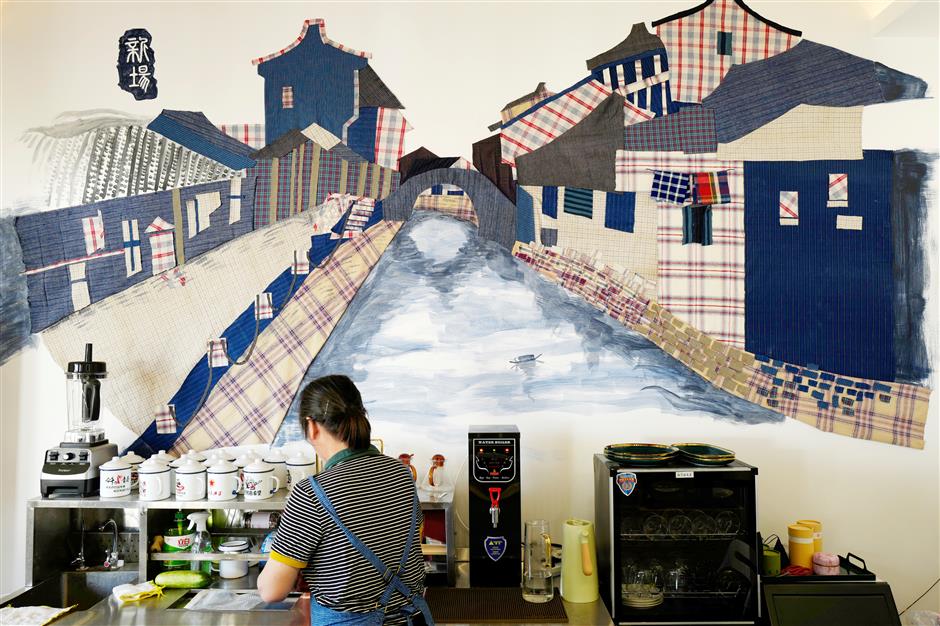 "Tubu yard" is a showplace for tubu handicrafts and a venue for activities such as lectures and workshops.

In ancient China, with no cameras to record important events like weddings, mothers or grandmothers typically wove the names of the newlyweds into the cloth they spun. The handwoven cloth symbolized best wishes for a happy rural life.

Tubu was also used to mark special occasions like festivals, harvest celebrations, births and deaths. It was a cherished item in gift-giving.

Liu told Shanghai Daily there is a need for "digital preservation" of the ancient art.

"Technologies such as artificial intelligence will be applied to preserve the patterns of tubu," Liu said. "Meanwhile, we can also tell stories about tubu's origins in a digital way that will resonate, particularly among the young.