There is more to UAE-China trade ties than just oil

Contrary to the common perception of a relationship as an oil-based economic partnership, the United Arab Emirates and China have recently been in the news for their partnerships in a variety of industries, especially in the realm of high technology.

A new agreement announced in September revealed that the UAE will fly its Rashid 2 rover aboard China's Chang'e-7 lunar landing mission in 2026. In Dubai, a Chinese automaker tested its flying automobile.

That comes as no surprise to Muhannad Alnaqbi, consul general of the UAE in Shanghai, who arrived in October 2021. The diplomat, who had never visited Shanghai or China before, now has direct knowledge of the city's administration and commercial environment and is certain that "huge potential lies ahead for expanded collaborations in many industries."

The collaborations are the product of years of mutual respect and friendship, with non-oil commerce between the two nations increasing 78.5 percent from US$34 billion in 2012 to more than US$60 billion in 2021.

In a recent interview with Shanghai Daily, the consul general revealed that six UAE companies will participate in the upcoming 5th China International Import Expo, which will be held on November 5-10 in Shanghai. DP World, a Dubai-based multinational logistics conglomerate that established its China headquarters in Shanghai earlier this year, is among those on the list.

The Emirati envoy spoke about the development of bilateral ties, the outlook for bilateral cooperation, and his personal experience in Shanghai. 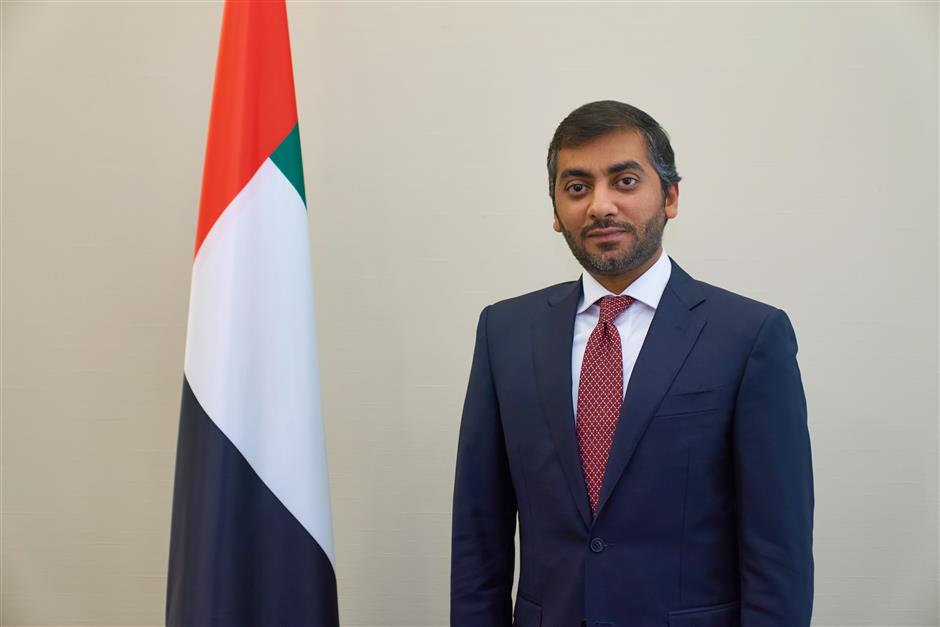 Muhannad Alnaqbi arrived in October last year as consul general of the UAE in Shanghai.

Q: Recent headlines have highlighted ties between the UAE and China in areas that may surprise some people, particularly in science and technology. Where do you see opportunities for future collaborations?

A: The UAE is committed to economic diversification and the development of a future-focused new economy in order to lessen its reliance on oil.

We welcome Chinese investment in many areas, such as new energy, aerospace, telecommunications, financial services, e-commerce, tourism, research and technology, and infrastructure.

Q: Are there any ongoing projects with Shanghai or neighboring provinces that fall under your jurisdiction?

A: The UAE is home to numerous free trade zones, including the well-known Khalifa Industrial Zone Abu Dhabi, which serves as the China-UAE Industrial Capacity Cooperation Demonstration Zone.

The Jiangsu Provincial Overseas Cooperation and Investment Company is in charge of the zone's investment, development and management. I'd like to take this chance to thank the provincial government and all of the builders.

The Mohammed bin Rashid Al Maktoum Solar Park, which is under contract with Shanghai Electric, is located south of Dubai. It is one of the largest solar photovoltaic facilities in the world and the most advanced in the UAE, with countless solar panels. 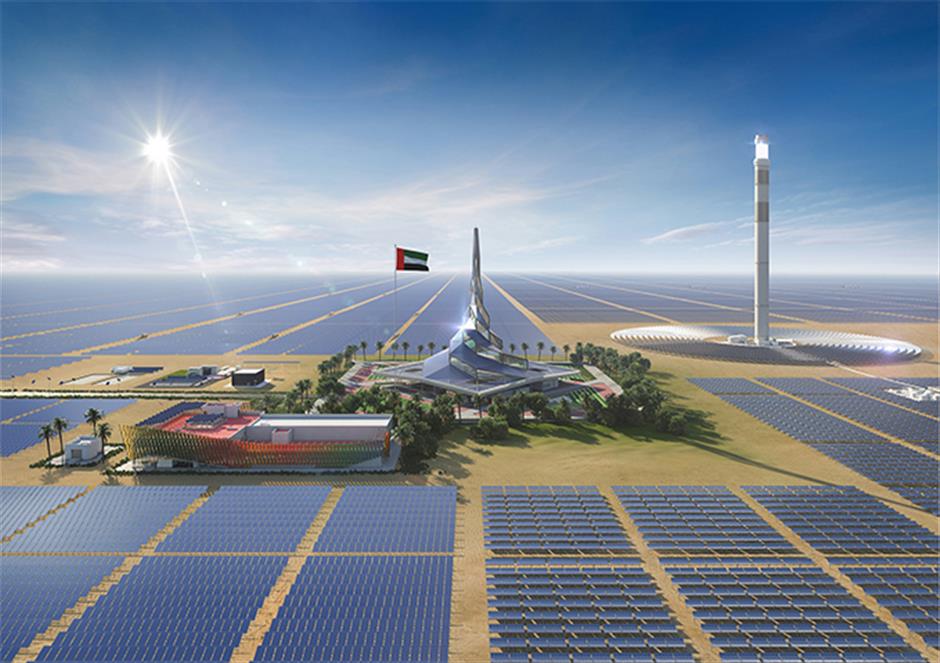 Shanghai Electric is building one of the world's largest solar photovoltaic facilities in the south of Dubai, at the Mohammed bin Rashid Al Maktoum Solar Park.

A: I must say that I much value the growth of connections between China and the UAE. Since the UAE and China established diplomatic ties in 1984, these relations have reached a historic high, thanks to strong leadership from both nations.

The strategic leadership of President Mohamed bin Zayed Al Nahyan and President Xi Jinping led the two nations to become comprehensive strategic partners in 2018, with collaborations in various domains including economy, trade, culture, politics and diplomacy, among others.

The UAE-China ties are currently in a new phase. We achieved a trade value of US$72.36 billion in 2021, an extraordinary success that represents the huge potential for future cooperation between the two friendly nations. This growth was 46.6 percent year over year.

The UAE is the Middle East's economic, trading and financial center, with close ties to the rest of the world, whereas Shanghai is China's worldwide financial center and the driving force behind Yangtze River Delta development.

We both have the responsibility of promoting regional prosperity, so we can work together in the future on projects like advancing the energy sector and increasing the talents of young people.

Q: Has the bilateral trade increased this year? Which industries do the majority of Emirati enterprises in Shanghai serve?

A: China is the UAE's largest trading partner. The bilateral trade value reached US$46.03 billion in the first six months of 2022, up 46.4 percent from the same period previous year.

Q: Has the recent collaboration between the UAE and China in fighting the pandemic, which includes the first COVID-19 vaccine production line in the UAE, been successful in containing the pandemic there?

A: The joint efforts between the UAE and China in fighting the pandemic have set an example for global partnership. The two countries signed agreements on jointly producing vaccines, announced the Strategic Partnership for Humanity, and initiated a joint project of the COVID-19 vaccine production line in the UAE (Life Sciences and Vaccine Manufacturing in the UAE).

It has not only benefited our two countries, but also people from other countries and regions. It aims to end the pandemic.

Q: You were in Shanghai early this year during the COVID resurgence. How do you think the city handled it?

A: Ever since the COVID-19 resurgence broke out in early 2022, Shanghai has exhibited incredible resiliency and fortitude. When fighting the pandemic, the Chinese government, and especially the Shanghai government, put people first and used all of its human resources and economic power to the fullest.

The historical and cultural city of Shanghai has proven its enormous economic potential, excellent and reliable pool of talent and various measures. It reflects the city's great risk management and defense ability. In order to meet people' needs for basic supplies and medical care, the city implemented its risk management system.

As a financial hub, Shanghai has a comprehensive financial risk management system that covers various services. This includes the Shanghai Gold Exchange's Shenzhen Operations Center, which made sure the exchange ran smoothly at the height of the pandemic.

After the city resumed its normal life and production, the municipal government announced plans to speed up efforts to revive and revitalize the economy, introduced policies and measures to aid businesses, and postponed the payment of social security and housing provident funds for sectors like retail, tourism, airlines and transportation. It also reduced or waived taxes for some businesses and self-employed individuals.

China's method of fighting the pandemic is in accordance with the strategy of the UAE, which focuses on technical solutions. The UAE has announced the vaccination of 100 percent of the targeted group, so that their immunity to the virus is increased, and we can reduce the number of infected people and control the pandemic.

Since the COVID outbreak, the UAE and China have made a commitment to collaborating with global society and overcoming obstacles together.

The UAE was one of the first nations to offer humanitarian aid to other nations in order to lessen the pandemic's effects. The UAE has donated 2,000 tons of medical supplies to more than 135 nations, built well-equipped field clinics in many of them to aid them, and made full use of our highly developed logistics sector to quickly ship COVID vaccines around the globe. 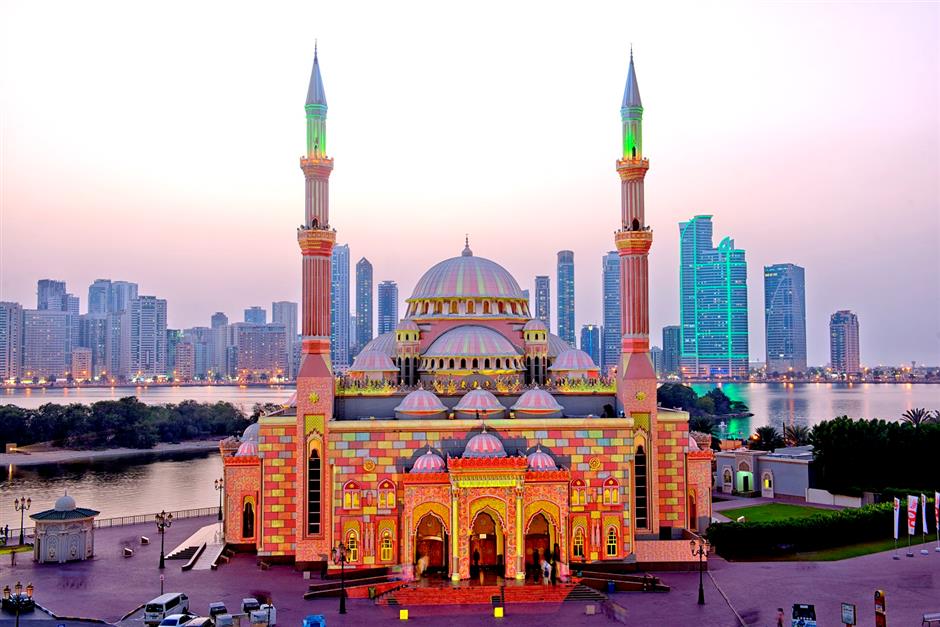 The Al Noor Mosque in Sharjah