VENDING machines selling HIV test kits have been installed in three universities in Shanghai, where the kits can be bought conveniently and secretly.

Shanghai Lixin University of Accounting and Finance, Tongji University, and Shanghai University are the first three schools in the city to be equipped with such machines.

Their presence is part of a program launched by the Chinese Association of STD and HIV/AIDS Prevention and Control together with the Bill and Melinda Gates Foundation to address the issue of HIV transmission on campus.

Some other universities in Chinese provinces, such as Heilongjiang and Yunnan, also offer such kits in vending machines. The machines sell snacks, noodles and drinks alongside the kits.

“After buying the kit, a test taker only has to collect his or her urine sample and drop it back to the deposit drawer in the machine,” said Yang Sashuang, a doctor at Shanghai Lixin.

“Staff at our clinic collect samples twice a week and take them to the disease control center for testing and post the results online,” she added. Results posted online can only be seen after testers log onto a website (www.renaijiance.com) using a code from the kit.

Students can also send the samples to designated labs via a courier service. 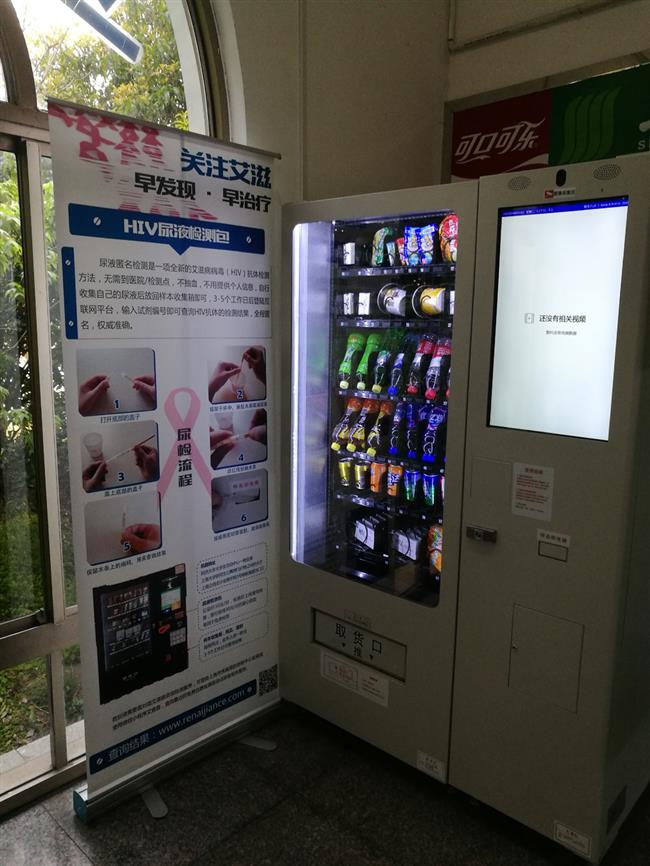 A vending machine sells HIV test kits, seen on the bottom shelf, at a discounted price at Shanghai Lixin University of Accounting and Finance.

“Throughout the process, the testers don’t have to go to the hospital or provide their private information, and they get the results in three to five workdays,” said Yang.

She pointed out that urine tests are not 100 percent accurate and if testers got an HIV positive result, they are advised to take a hospital blood test for a more accurate diagnosis and timely treatment. All disease control centers at the city and district levels in Shanghai offer free HIV tests.

China had about 718,270 people living with HIV/AIDS as of last June, according to official statistics. Sexual transmission accounts for over 90 percent of cases reported in recent years.

Wu Zunyou, head of the AIDS and HIV prevention under the Chinese Center for Disease Control and Prevention, has repeatedly said that the rise of new HIV cases on campus, especially among young men, should sound a warning.

Zhou Hongfeng, a doctor at the clinic in Shanghai University, said no confirmed cases have been found among students at the university as it’s not a required item in students’ health checks.

“No students would come to us for HIV test or consultation for fear of discrimination,” said Zhou. “Some are seeking consultation or taking tests outside of campus.

“We hope the machine can help them get a timely test while protecting their privacy.”

Lixin’s Yang said the machine also acts as a new tool to raise student awareness of the disease and remind them of the need for self-discipline and the right way to protect themselves in sexual relationships.

Marc Hu, a postgraduate studying civil engineering at Tongji University, said: “It’s no longer a secret that university students is a high-risk group in China in HIV infection. So such a convenient and cheap way for them to get timely diagnosis and treatment is very important.”